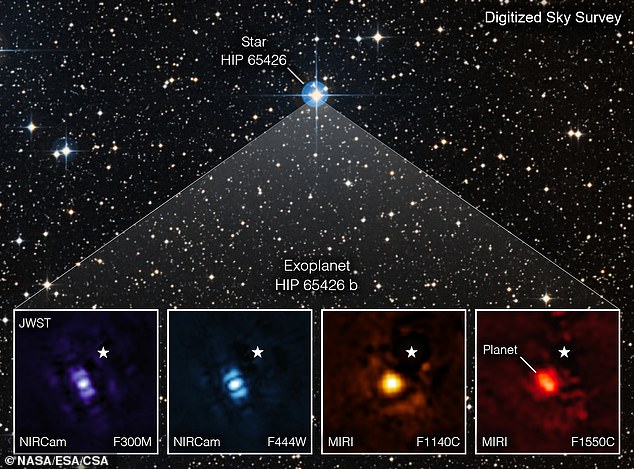 The telescope used its Near-Infrared Camera (NIRCam) and Mid-InfraRed Instrument (MIRI) that can block out surrounding starlight to capture epic images of the exoplanet HIP 65426.

The alien world was first discovered in 2017 by the European Southern Observatory’s Very Large Telescope in Chile, but its long wavelengths were blocked by Earth’s atmosphere.

However, because Webb floats through space, it was able to capture direct images of the planet that astronomers can process to remove the starlight and expose the planet.

NASA’s James Webb telescope has captured detailed images of its first exoplanet to be outside our solar system. The telescope used its powerful technologies to “see” the exoplanets at longer wavelengths missed by telescopes on Earth

Aarynn Carter, a postdoctoral researcher at the University of California, Santa Cruz, who led the analysis of the images, thought this was “digging for space treasures.”

The exoplanet is only 15 to 20 million years old, which is much younger than our 4.5 billion year old Earth.

It is located just outside our solar system, but NASA notes that it is a gas giant that has no rocky surface and therefore cannot harbor life.

Astronomers discovered the planet in 2017 using the SPHERE instrument on the Very Large Telescope at the European Southern Observatory in Chile and recorded it using short infrared light wavelengths. 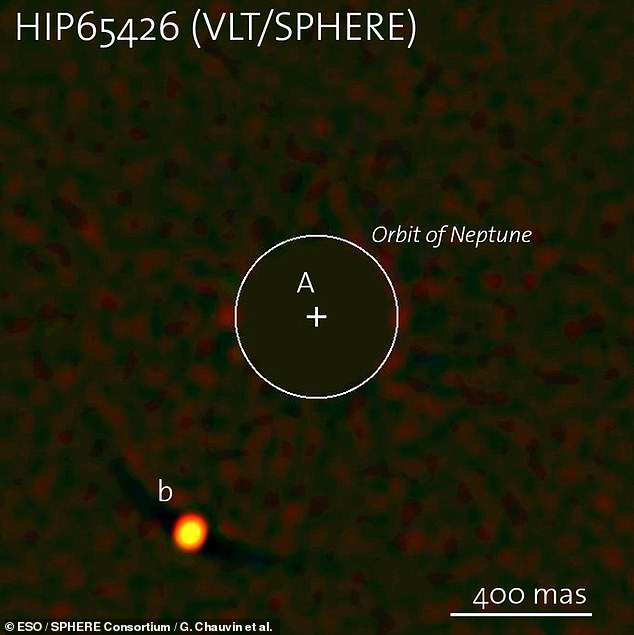 The alien world was first discovered in 2017 (pictured) by the European Southern Observatory’s Very Large Telescope in Chile, but its long wavelengths were blocked by Earth’s atmosphere.

Webb’s technology is able to capture the longer infrared wavelengths without interruption as the telescope floats through space.

Researchers involved in the discovery are currently analyzing the data to write a paper that will be submitted for review — the current information has not been peer-reviewed.

But Webb’s first image of an exoplanet already hints at future opportunities to study distant worlds, NASA said in a statement.

Since HIP 65426 b is about 100 times farther from its parent star than Earth is from the sun, it is far enough from the star that Webb can easily separate the planet from the star in the image.

This is due to the NIRCAM and MIRI being equipped with coronagraphs that act as small shields to block out the surrounding starlight.

NASA’s Nancy Grace Roman Space Telescope, due to launch later this decade, will demonstrate an even more sophisticated coronagraph. 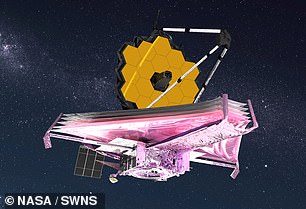 In each filter image, the planet appears as a slightly differently shaped spot of light. That’s because of the particularities of Webb’s optical system and how the light translates through the different optics.

While this isn’t the first direct image of an exoplanet taken from space — the Hubble Space Telescope has previously captured direct exoplanet images — HIP 65426 b points the way forward for Webb’s exoplanet exploration.

“I think the most exciting thing is that we’re just getting started,” Carter said.

“Many more images of exoplanets are coming that will shape our overall understanding of their physics, chemistry and formation. We may even discover previously unknown planets.’

It is the world’s largest and most powerful orbital space telescope, capable of peering back 100-200 million years after the Big Bang.

Maria Beregova, 22, seen for the first time since being linked to newly single Leonardo DiCaprio