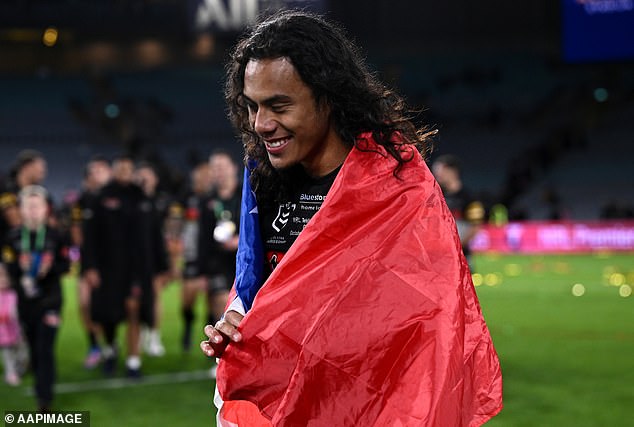 Jarome Luai could miss the upcoming Rugby League World Cup after the NRL Integrity Unit was made aware of some of his social media posts in the wake of Penrith’s Grand Final triumph on Sunday.

The 25-year-old led the celebrations in the wake of the Panthers’ 28-12 win over Parramatta, as Penrith became only the second club in the NRL era to win back-to-back premierships.

Luai took selfies in the barns with cheering teammates and family members, but one moment could derail his World Cup campaign for Samoa.

The Panthers five-eight shared a photo of him and teammate Jaeman Salmon on his Instagram. The publicly shared post contained a word that Daily Mail Australia has chosen not to republish and was quietly removed seven hours later.

“The NRL Integrity Unit is aware of the mail,” an NRL spokesperson told NewsCorp.

The spokesperson added that the NRL has yet to launch an investigation and would not comment on potential sanctions that Luai could face.

Some teammates told the publication that the racially charged word is sometimes used between friends. 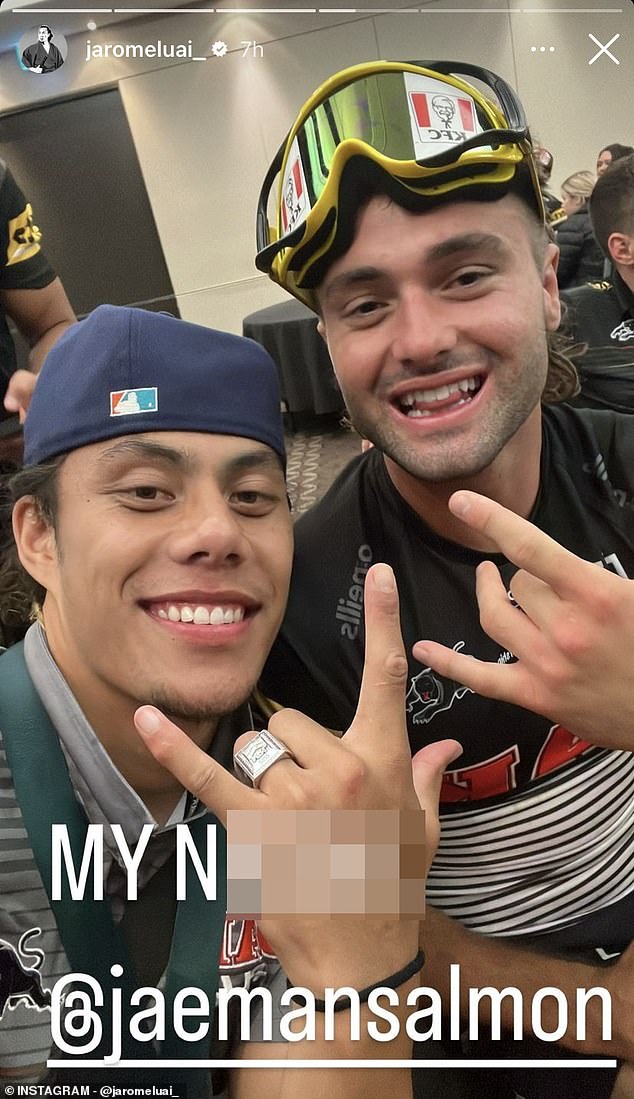 But according to Daily Telegraph NRL journalist Paul Kent, Luai could be in danger of missing matches at the World Cup if the NRL were to crack down on him.

“It’s a well-known racial term that Penrith claims is an expression of affection, which is ridiculous,” Kent said Monday night on Fox League’s NRL 360.

‘He [Luai] is a proud Samoan and he is going to play for Samoa in the World Cup and he has a great chance of missing games now because he once again let himself be carried away by his own greatness.”

Fellow NRL 360 panelist Brent Read agreed: “I don’t like this at all,” he said in reference to Luai’s now-deleted post. 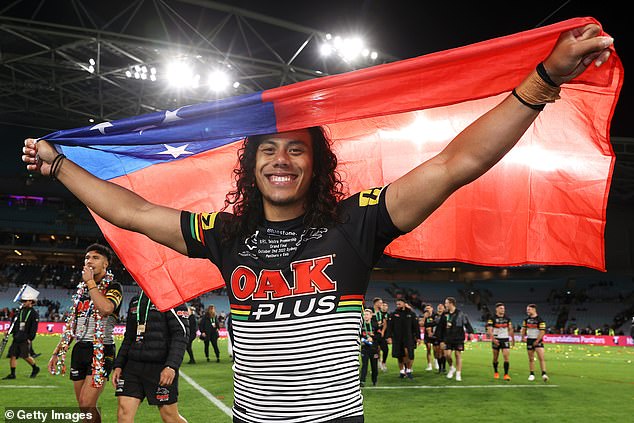 Luai, a proud Samoan, could miss World Cup matches if punished by the NRL 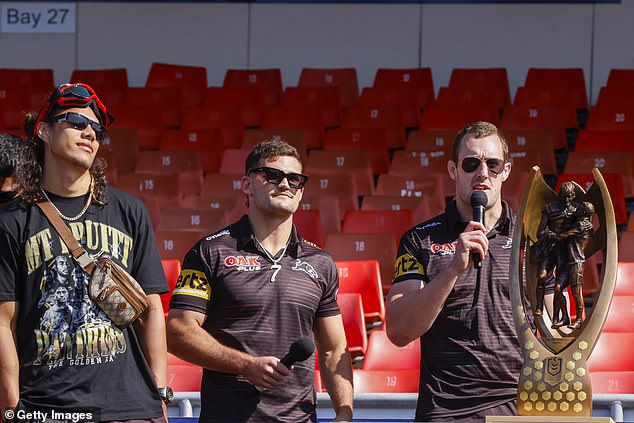 Samoa kicks off their World Cup on October 14, when they face host nation England in the opening game of the tournament in Newcastle.

Luai fueled the rivalry between Parramatta and Penrith ahead of the decider.

When asked if the Panthers were the Eels’ little brother, the New South Wales star replied, “You can call us Dad.” 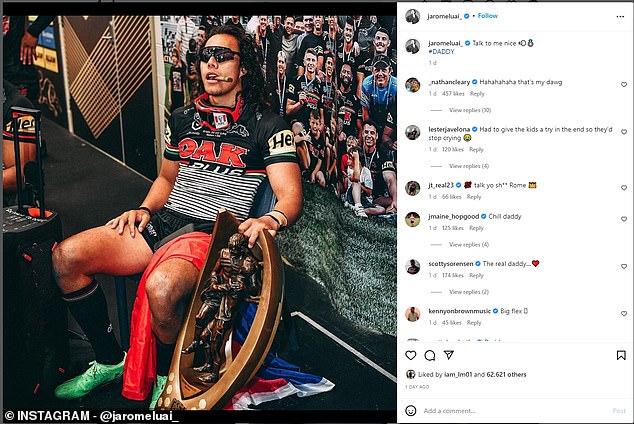 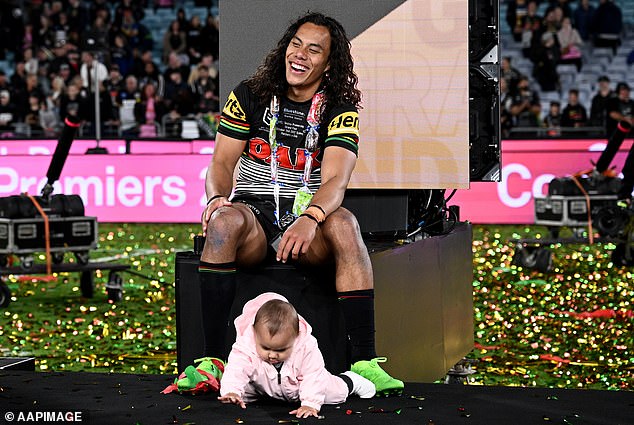 The Panthers gun welcomed a newborn daughter, Halo, last week and let his two other children celebrate with him at Accor Stadium on Sunday night.

Luai repeated the chorus on Sunday, posting a photo of himself smoking a cigar in the barns after the grand finale and captioning it: “Daddy loves you.”

In a separate post captioned “Talk to me nice #DADDY,” the Panthers smoke a five-eight cigar in the barns, with the NRL premiership trophy by his side.

James Fisher-Harris struck a similar note to Luai’s when Penrith celebrated in front of their fans at BlueBet Stadium on Monday morning. 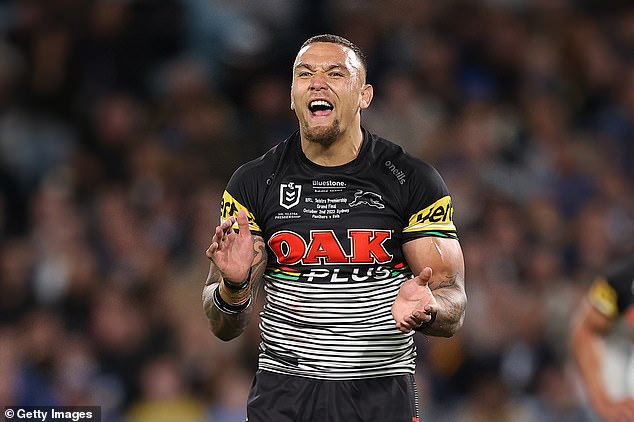 James Fisher-Harris woke up Panthers fans on Monday, calling the Eels the ‘sons’ of the Panthers

“I just want to say that Parra are our sons,” he told the crowd, who then broke into a “We hate Parra” chant.

Kent argued that the Eels behaved “like mugs” and risked “ruining their own party” with their celebrations.

“At some point, these guys have to be asked to act like men,” he said.

“They carry on as 16-year-old schoolboys as they continue with this win. […] Isaah Yeo and Dylan Edwards are the only ones you would look at and say they can walk away with some kind of integrity […] The rest act like rat mugs.”

Manchester United: Reasons to be fearful and cheerful after Ten Hag’s men were hammered by Man City