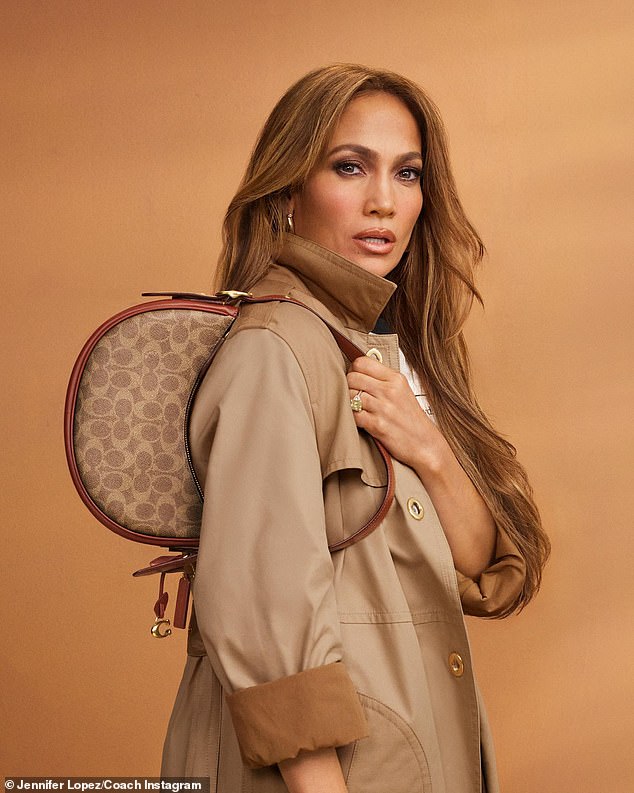 Jennifer Lopez has appeared in the new Coach fall 2022 campaign.

The Marry Me actress was seen in a beige trench coat with a purse over her shoulder as she flashed her green diamond engagement ring from Ben Affleck; the two wed earlier this month in Georgia and honeymooned in Italy.

The 53-year-old siren was also seen in Coach in a video shared to her Insta Stories.

She works as a model too! Actress and singer Jennifer Lopez has appeared in the new Coach fall 2022 campaign

In the still photo she sizzles with her hair down as the caption read, ‘We’ll have what #JenniferLopez is having. ✨ As in Sig Cs on a great bag that sits right below the shoulder. Photographer: @tylersphotos #CoachNY.’

In the video there are two JLos: one is bratty with a cap on and the other is normal, calm with her hair down.

They speak to each other in a split screen.

The bratty Lopez is heard saying, ‘I thought this was my call time?’ as she talks up her cream colored purse. 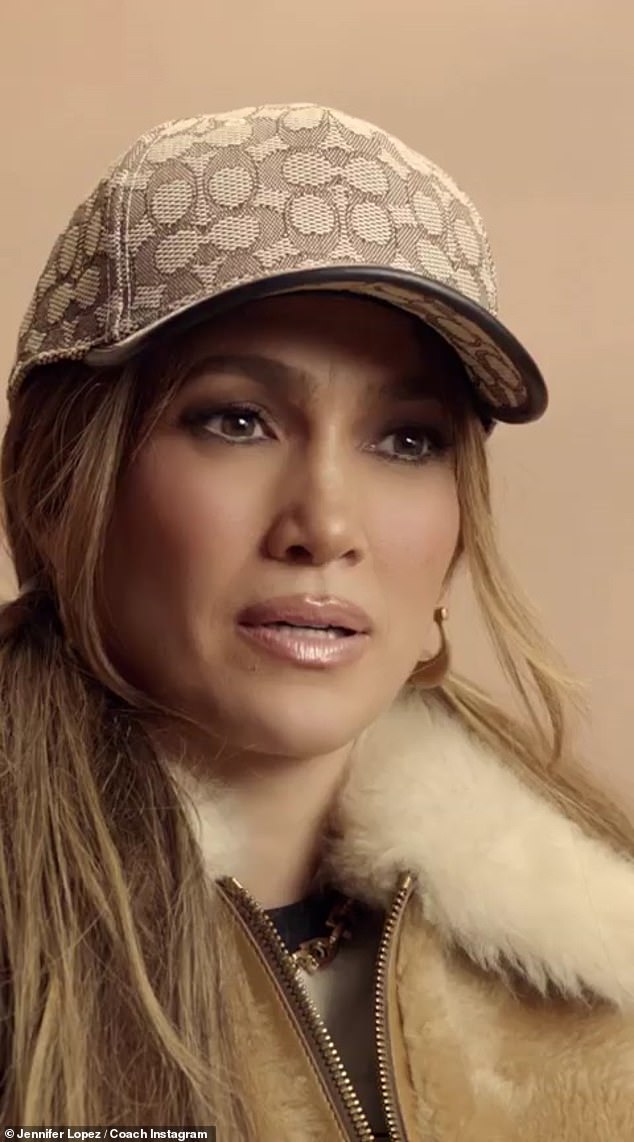 Fun on film: The 53-year-old siren was also seen in Coach in a video shared to her Insta Stories 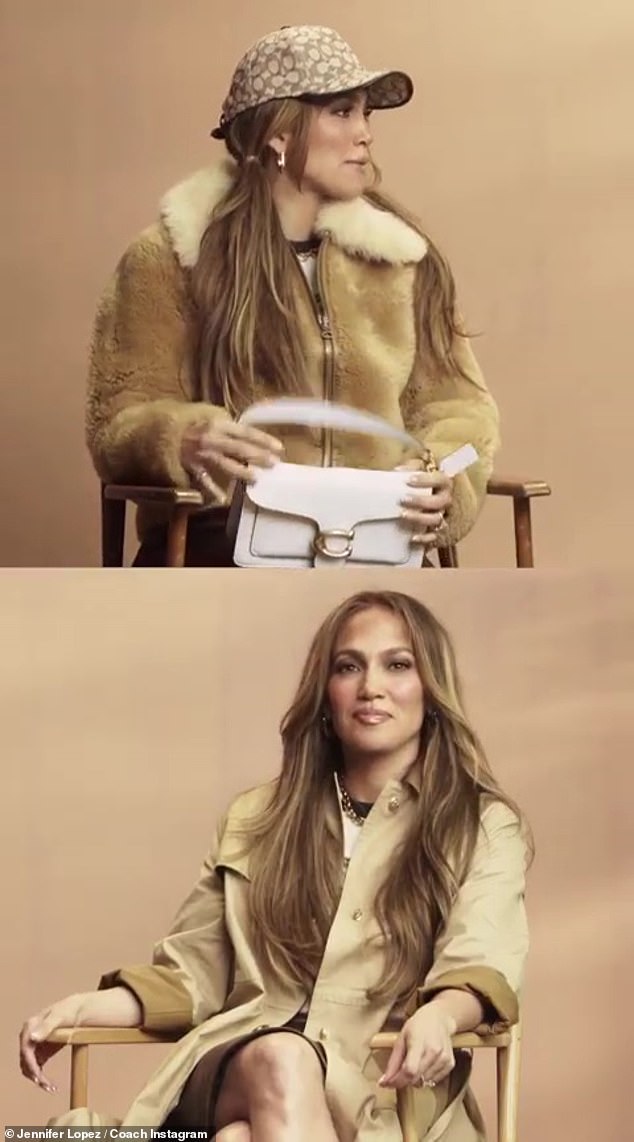 Bad and good: In the video there are two JLos: one is bratty with a cap on and the other is normal, calm with her hair down 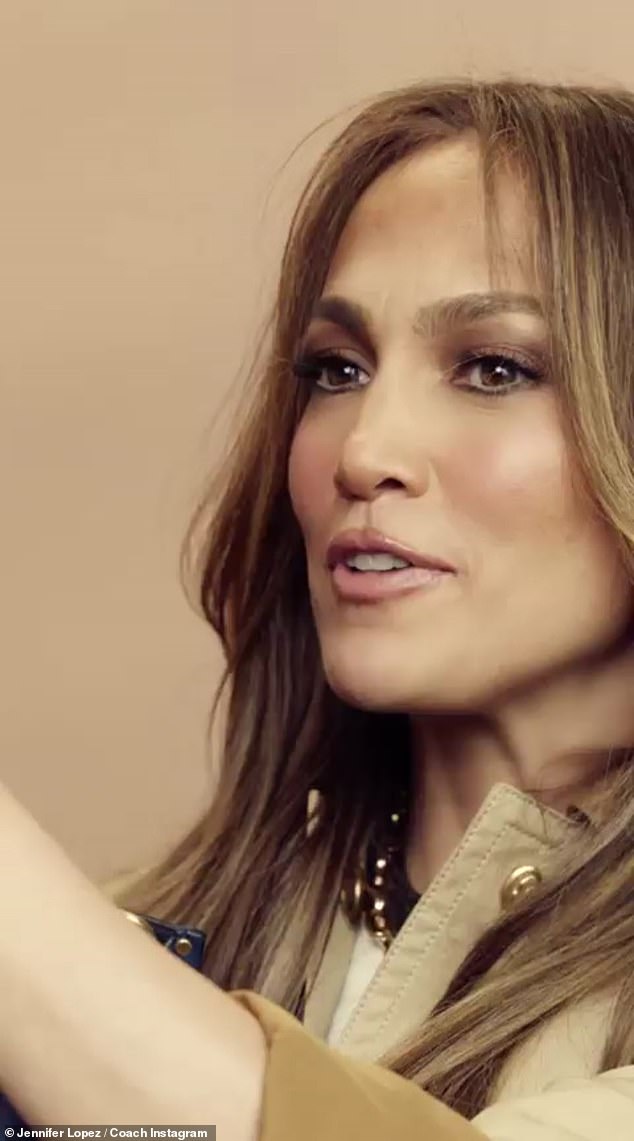 Good Jenny was easy going: She had her hair down and was relaxed as she sat in a chair

She says the purse is ‘timeless, just like me.’

Last week the brunette bombshell shared an image from the same Coach campaign on her Insta Stories; she has been the face of the US brand for many years.

‘The Rogue bag,’ was all the Marry Me actress wrote over the image where she was wearing a leather coat while holding a purse. The photo was shared to her Insta Stories.

On the Coach Instagram page it said, ‘Icon icon. 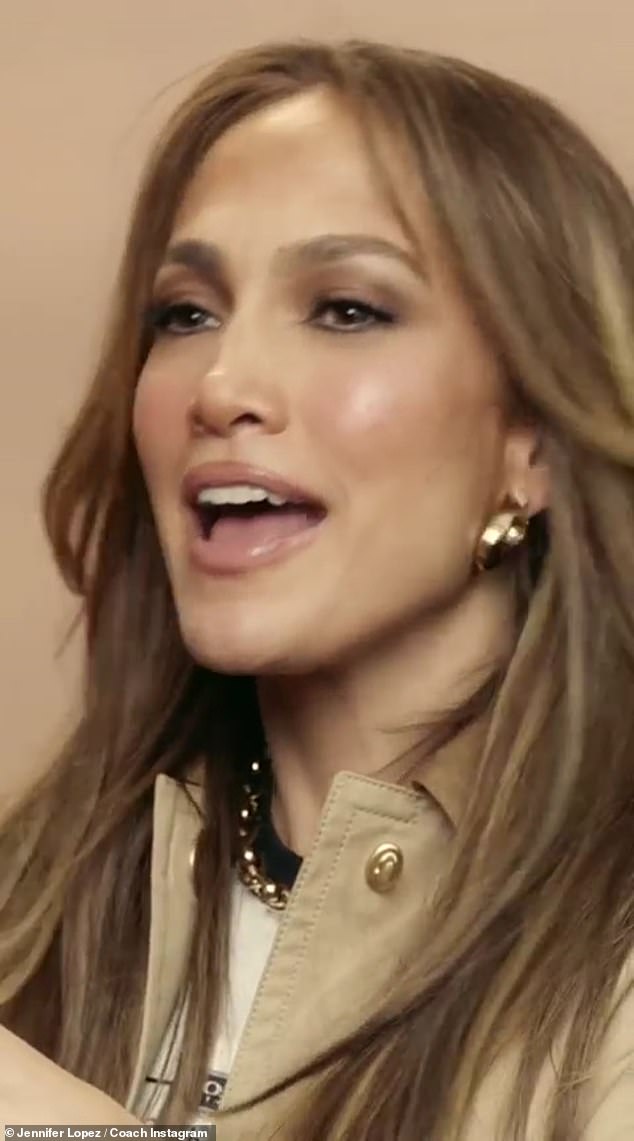 Not having it: She does not seem to approve of the bratty JLo 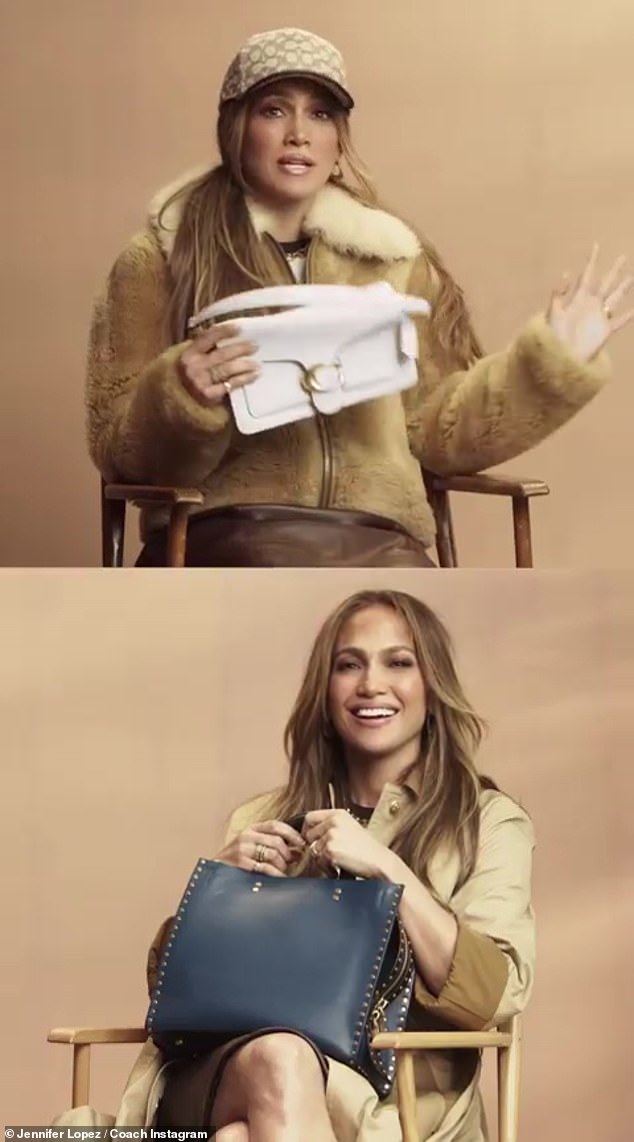 Back and forth: They speak to each other in a split screen. The bratty Lopez is heard saying, ‘I thought this was my call time?’ as she talks up her cream colored purse

‘We’re starting the the season with fresh takes on Coach classics—you know, the forever pieces that feel like home. Photographer: @tylersphotos #TheRogueBag #CoachNY.’

In a video for Coach, Jennifer was seen holding another purse, this with the Coach logo all over it.

And in another image she wore a beige trench coat with a white Coach print shirt and a brown leather skirt with yellow gold jewelry. 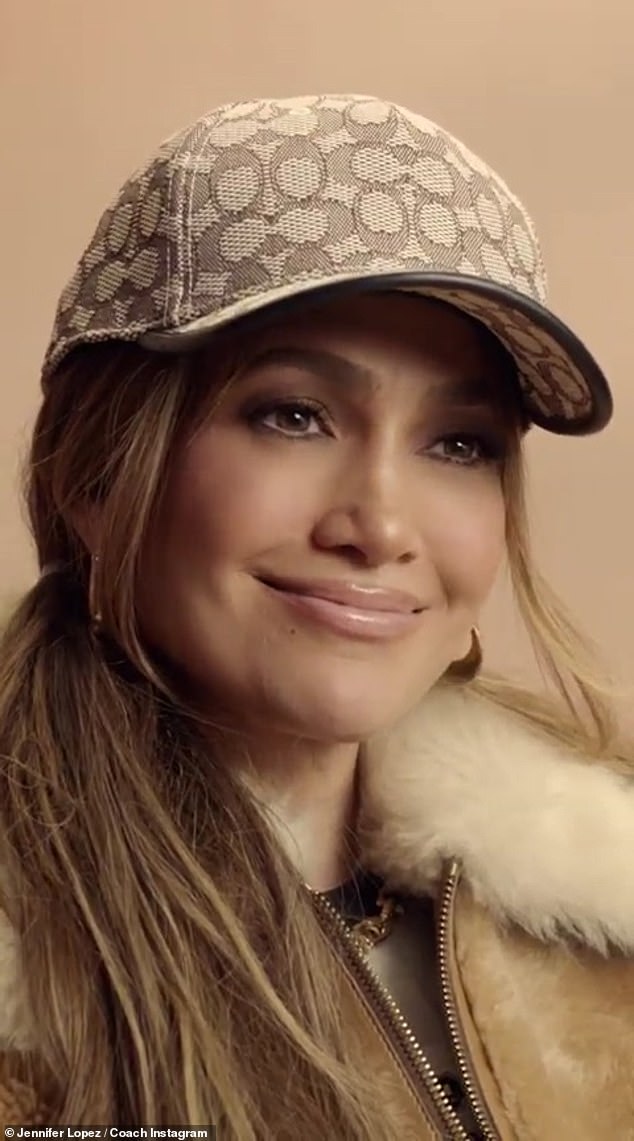 Brat fever: She says the purse is ‘timeless, just like me.’ The normal Lopez just rolls her eyes

This new campaign comes just after his pal Kevin Smith said Affleck has ‘never been happier’ since marrying Lopez.

The moviemaker was among the guests at the couple’s lavish wedding celebration in Georgia over the weekend.

Kevin revealed he was delighted to see pure joy on his friend’s face as he committed himself to the pop star at the ceremony.

‘He’s never been happier. I’ve seen that dude be happy, but the pure joy that was radiating from his face was absolutely unforgettable,’ he told ET Online.

Kevin added of the ceremony: ‘I was happy for him. And they were happy, you could tell. They worked hard to get here, they earned it, and it was so nice. They had a great day for it.’

It comes after Kevin admitted it was an ’emotional’ day and he shed some tears during the ceremony.

‘But I bawled throughout because it was goddamn beautiful. So beautiful.’ 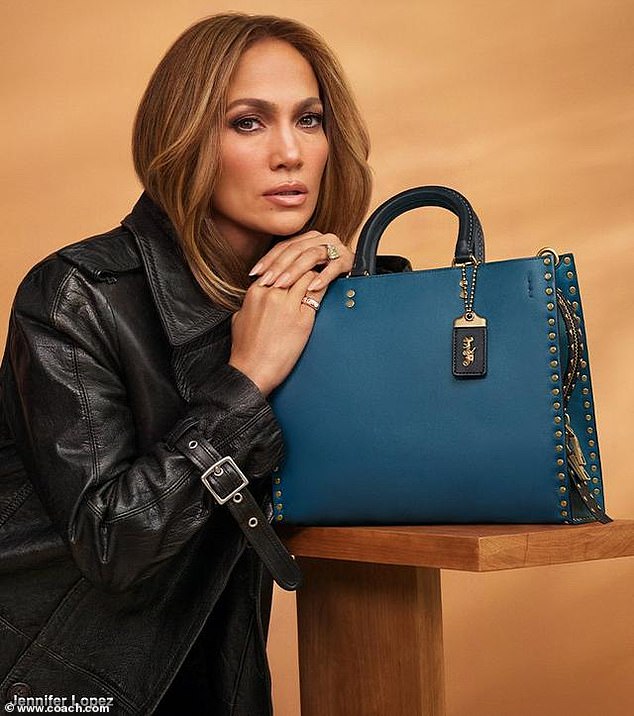 The couple previously married in Las Vegas in July before staging the lavish celebration at Ben’s property in Georgia.

Guests also included Ben’s three children from his marriage to Jennifer Garner – Violet, 16, Seraphina, 13, and 10-year-old Samuel – and Jennifer’s 14-year-old twins Max and Emme from her marriage to Marc Anthony.

The 53-year-old bride wore a white Ralph Lauren couture gown complete with a long train and veil, while Ben, 50, wore a black and white tuxedo. Photographs showed the pair hugging at a waterside jetty at the mansion, with a fireworks display from a lake at the property. 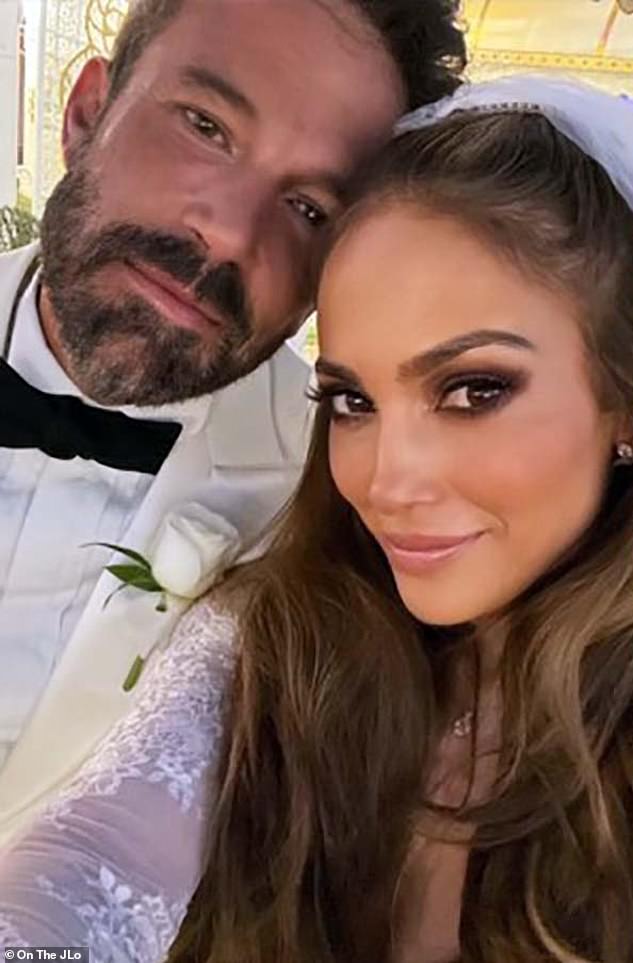 Happy as can be: ‘He’s never been happier. I’ve seen that dude be happy, but the pure joy that was radiating from his face was absolutely unforgettable,’ he told ET Online.com. Ben seen with Lopez during their Las Vegas wedding

The marriage comes 20 years after the couple dated and got engaged, only to call off their nuptials in 2003.

On Wednesday UsWeekly claimed that the groom became emotional when giving a speech to his new wife, JLo.

The Argo star and director referenced his 2002 engagement to the Marry Me singer, noting that they didn’t walk down the aisle 20 years ago for a reason.

The Batman actor said that they did not marry the first time because they needed to have their respective children.

Lopez has Max and Emme, 14, with ex-husband Marc Anthony and Affleck has Violet, 16, Seraphina, 13, and Sam, 10, with his ex-wife Jennifer Garner. 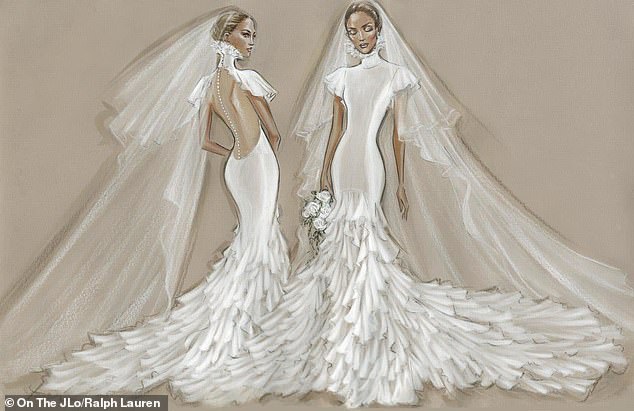 The look: Ralph Lauren Couture made her gowns by hand with exquisite detailing 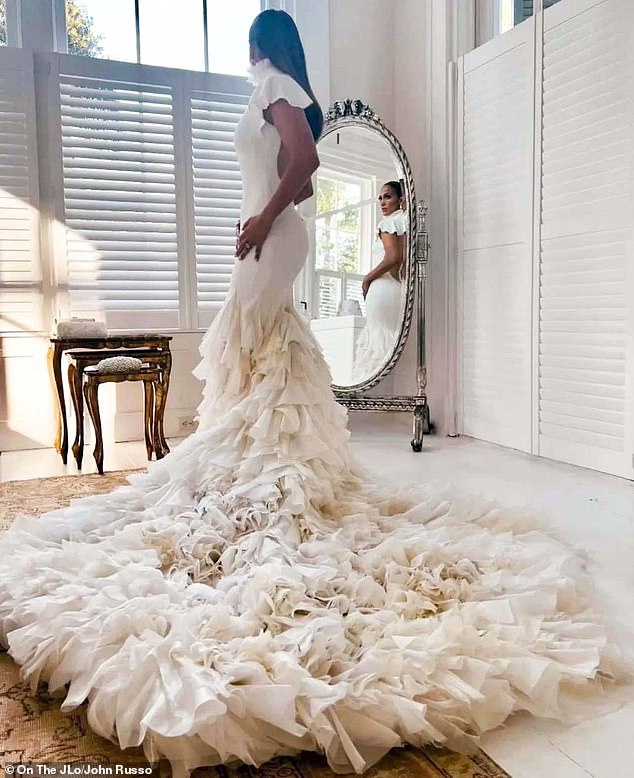 The main gown: There were pieces of fabric sewn onto her 20ft train

A source told the site: ‘Ben made an impassioned speech professing his love for Jennifer and her kids and said the children are the blessing and gift that happened because they didn’t get married before and that is proof that everything happens for a reason.’

Ben and Jen became engaged 20 years ago but they called off their nuptials in 2003.

The children were a big part of the couple’s weekend wedding.

A source told People, ‘Jennifer loved having all the kids there. She loved the location. It all felt very special. It was a dream for her.’

Now she will be stop-mom to his three kids.

This is not the first time Lopez will play the role of stepmother. 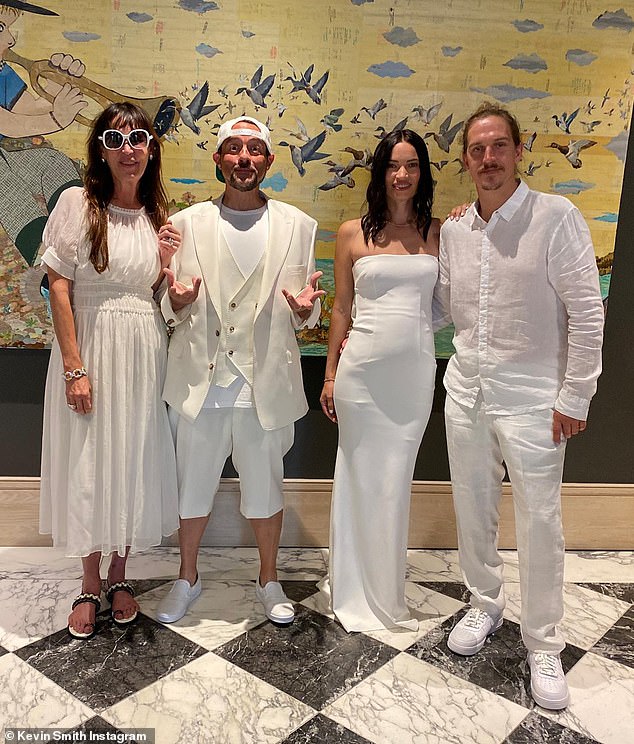 His pal likes to dish! Ben’s longtime friend Smith, seen left, has said Ben was happy and added that his wedding speech was ’emotional’; with Jason Mewes, right

The new Mr and Mrs Affleck are living at a rental in Beverly Hills until the remodel on Lopez’s old Bel Air, California mansion is done.

It is not known if all the kids will go to the same school as they are almost all teens with the exception of Samuel.

The wedding was spectacular with an ‘old Hollywood-theme, revealed DailyMail over the weekend.

Stylist Courtney Victor added, ‘They all seemed like such a happy and cohesive family unit. She is absolutely flawless. It’s unbelievable how beautiful she is.’ 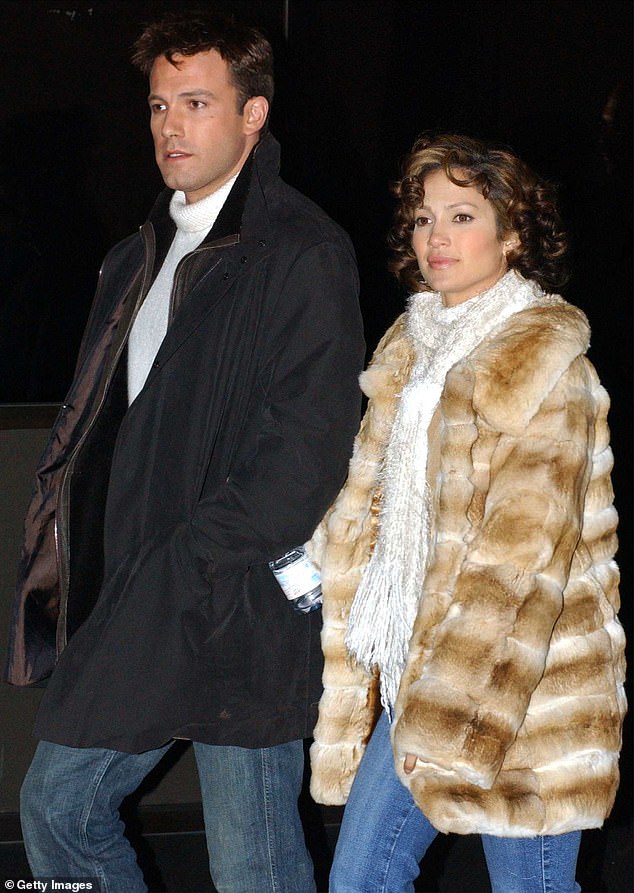 The past is back: The Argo star and director referenced his 2002 engagement to the singer in his wedding speech, noting that they didn’t walk down the aisle 20 years ago for a reason. Seen in 2003

And the Bronx born beauty loves being Mrs Affleck.

‘She keeps saying “my husband” and it’s very cute,’ the insider said.

On Tuesday Lopez gave fans a look at her wedding dresses which were custom made by Ralph Lauren for his couture line.

She wore a total of three dresses in all, she shared with OnTheJLo.

There was one with a high neck and long train, another with a keyhole in front and a third with strands of pearls draped down her body. The gowns are estimated to cost about $1 million each.

The weekend wedding event came after the couple got married in Las Vegas in July. She wore a white gown for that wedding as well and her kids were in attendance.

Jennifer Lopez has played a bride many times in her movies.

Here is a look at some of her best gowns on the silver screens.

In The Wedding Planner in 2001 with Matthew McConaughey she had on a satin off the shoulder dress.

In the film Enough from 2002 with actor Billy Campbell, Jenny had on a lowcut gown with a sweetheart neckline.

For 2006’s El Cantante she had on a long sleeved satin gown with a lace overlay. She worked with – at the time – real life husband Marc Anthony who also played her husband.

In 2021’s Marry Me she had on a beige lace and crystal gown to say yes to Maluma but he never showed.

And in this year’s movie Shotgun Wedding she modeled a gauze dress with a sweetheart neckline. 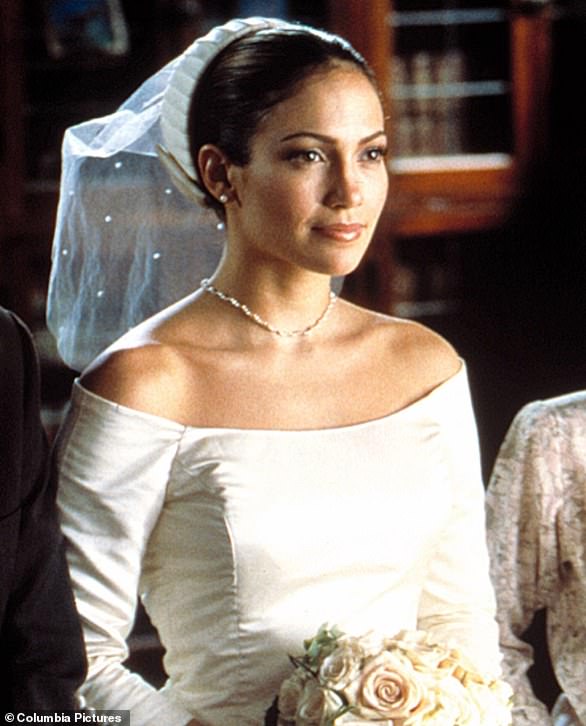 A beautiful bride: Seen in the film The Wedding Planner in 2001 with Matthew McConaughey 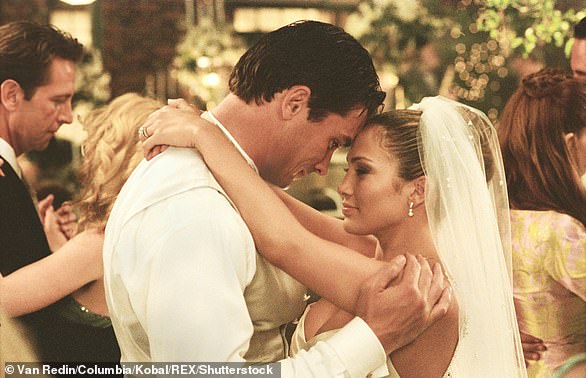 Married on film: In the film Enough from 2002 with actor Billy Campbell 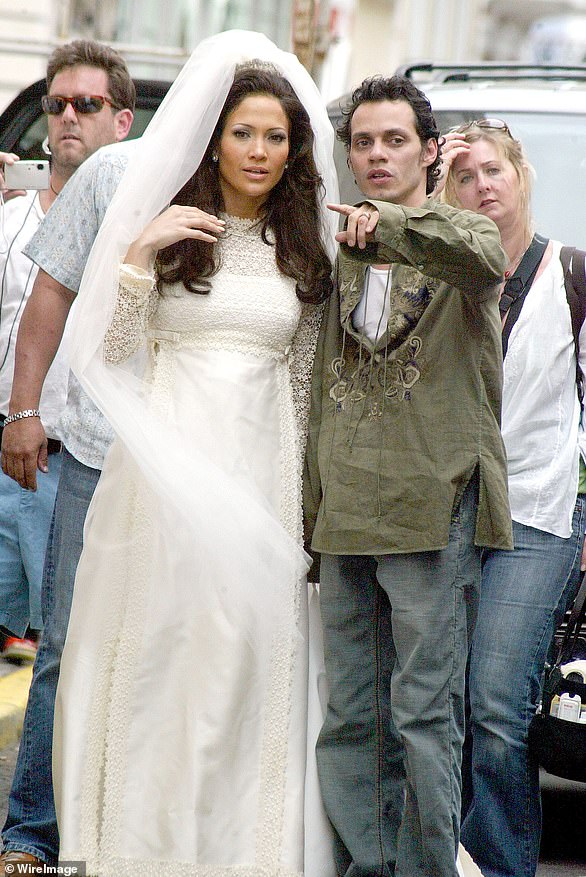 A bride on film and in real life: Lopez with real life husband Marc Anthony who also played her husband in El Cantante 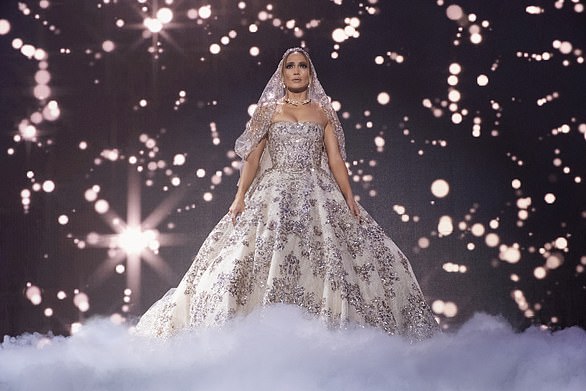 All dressed up to wed: In a silver wedding gown for her next movie Marry Me 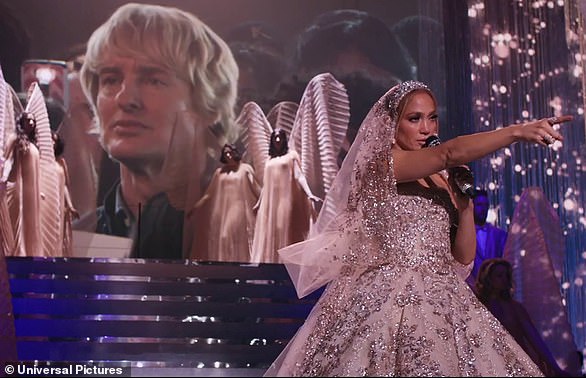 Be my man: Jenny points to Owen’s character as he appears on the screen behind her 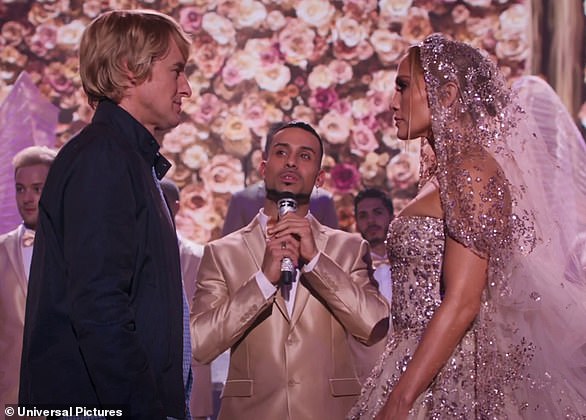 Will your take Jennifer Lopez – as Kat – to be your wife? Lopez and Wilson are face to face as he says ‘OK’ to being her husband 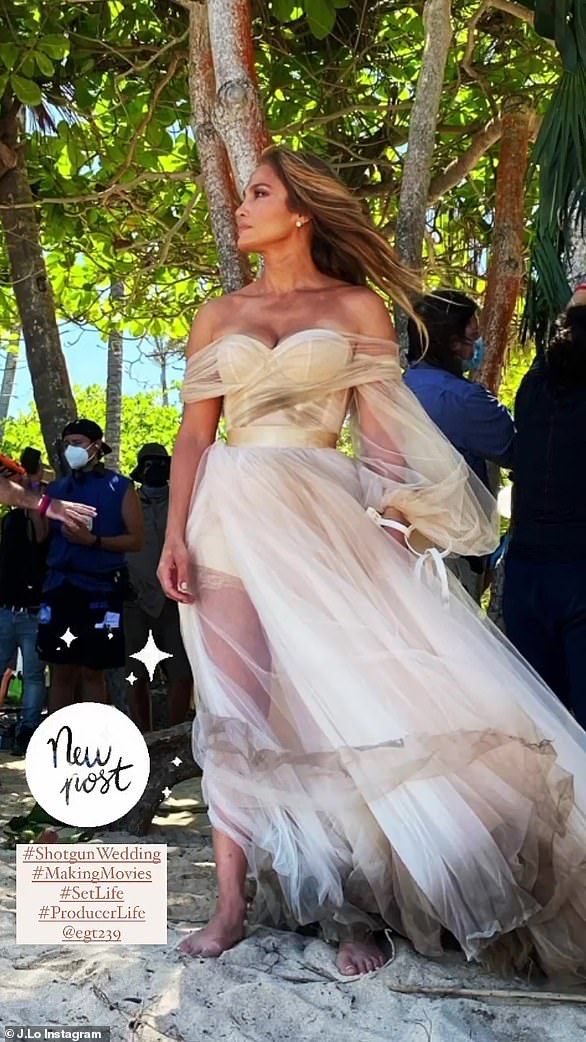 Another wedding dress: In her gown for the 2022 film Shotgun Wedding