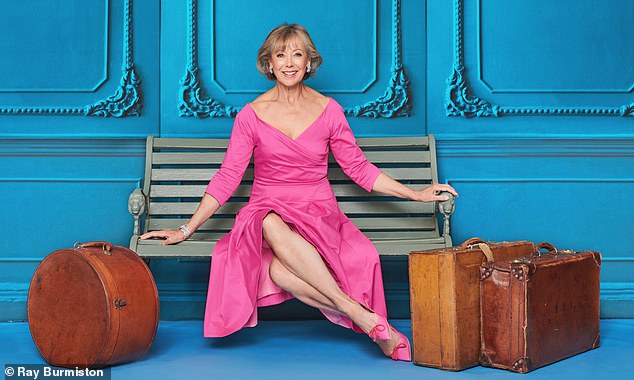 It says something about Jenny Agutter’s evergreen allure that, as she looks ahead to her 70th birthday this year, she still has a note on her website warning fans that any, er, unsuitable photos they send in will be returned, unsigned.

You might think she means stills of her naked swimming scene in the 1971 classic film Walkabout, images indelibly inked in the adolescent memory of many, many now middle-aged men. But actually, she doesn’t.

She gets the occasional cannibalised shot of her head attached to a model in a tame glamour pose – here she demonstrates, eyes wide, mouth in a flirtatious pout, well-turned ankles primly pressed together.

‘My head on someone else’s body, I don’t know whose body, not necessarily completely naked, but maybe half-naked and… just, no! That’s not me. I mean, can’t they see it’s not me, just my head stuck on?’ There’s a mini shudder.

‘As for Walkabout, I don’t think anyone who was a fan would send me a photograph from the swimming sequence. I think they would realise that was just not on. I was swimming naked because if you were swimming alone in the desert you wouldn’t be in your bra and knickers, would you?’

You have to keep living your life until you die- really living, too, every day as it comes at you

The role, filmed when she was just 16, turned her into a kind of sex symbol, though she doesn’t rue it for a second. ‘If it had been a display, if it was me doing a centrefold for Playboy – not conceivable – then I might have regretted that later.

‘But Walkabout is an important film and I consider myself extremely lucky to have been part of it. If anyone perverted wishes to distort things then, well, I am saddened, but no regrets.’

She would go on to join the Royal Shakespeare Company and the National Theatre, to win an Emmy and a BAFTA, but she has never shaken off her swoonable image. She would be toga-clad rebel Jessica 6 in the 1976 sci-fi classic Logan’s Run and well-starched Nurse Alex Price in 1981’s comedy-horror An American Werewolf In London.

Even as cynical spy boss Tessa Phillips in the BBC spy drama Spooks, 30 years after Walkabout, she garnered more male admirers. She still doesn’t like the sex symbol tag though. 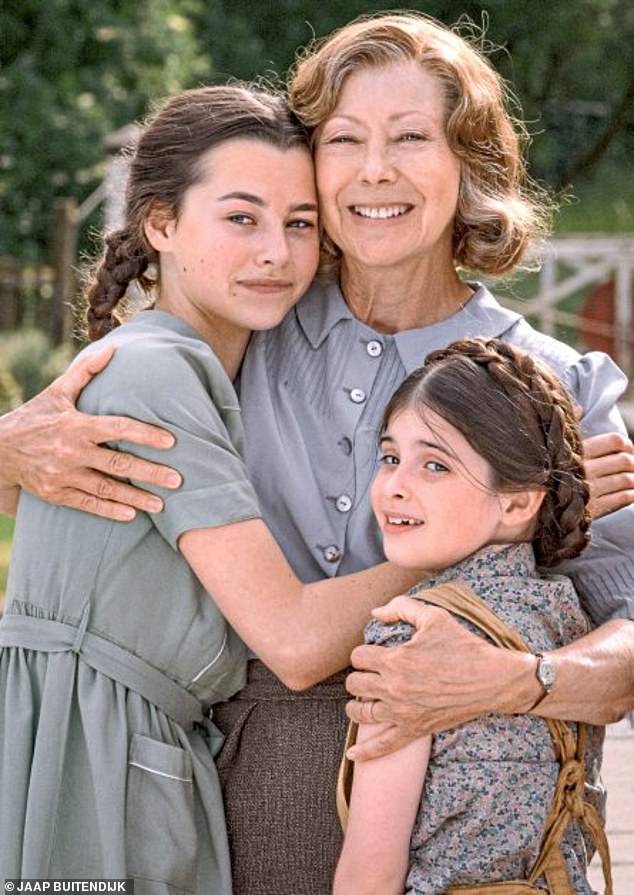 Jenny was first cast as Bobbie in a BBC mini-series in 1968, then rose to stardom playing the same role in the 1970 Lionel Jeffries film, and played the role of Bobbie’s mother in an ITV remake in 2000. Pictured: As grandmother Bobbie in The Railway Children Returns

‘It is not the way I perceive myself or have ever really perceived myself,’ she says. ‘I was once asked, ‘Do you think of yourself as sexy?’ and I said, ‘That’s not a word I understand.

‘Do you mean sexy as in sexual, or are you using it as an adjective to describe a healthy appetite for living, which it could equally be?’ And there are so many other words for that: attractive, vibrant, energetic. To be seen in one specific area is not me at all.’

Anyway, she’s delighted by her current role as the wise and kind Sister Julienne in Call The Midwife, where her character is age appropriate and wears a habit. The dramatic finale to the 11th series in February featured a blink-and-you’ll-miss-it appearance by a little girl called Bobbie.

Sexy is not a word I understand. Does it mean sexual? It’s not the way I have ever perceived myself

She was the daughter of the driver of the 5.19pm train from Chelmsford which crashed close to the convent, Nonnatus House, with Sister Julienne among those on board. Calling this character, this railway child, ‘Bobbie’ was, of course, a nod to the role that launched Jenny’s career, that of Bobbie Waterbury in The Railway Children.

And it’s The Railway Children we’re talking about today since Bobbie is – hurrah – back on the big screen this summer. Jenny was first cast as Bobbie in a BBC mini-series in 1968, then rose to stardom playing the same role in the 1970 Lionel Jeffries film, and played the role of Bobbie’s mother in an ITV remake in 2000. I ask how she would have felt if she’d not been invited to be part of the new film. ‘Quite p****d off, frankly,’ she says, laughing. 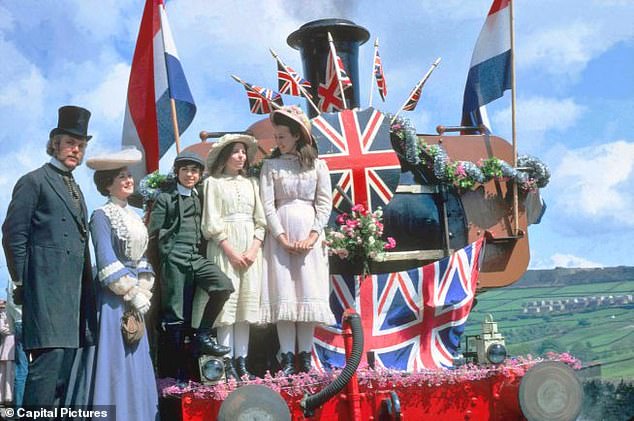 Jenny joked that she would have been ‘quite p****d off’ if she was not asked to be part of the new film. Pictured: Jenny in the 1970 film

Bobbie, the Edwardian girl who averts a train crash by ripping up her red petticoats and standing on the tracks, is now a grandmother, taking in a new trio of railway children. We’re in Yorkshire again, but this time the children are not escaping the disgrace of a father in prison, wrongly accused of spying, as Bobbie and her brother and sister were. It is now 1944, and Lily, Pattie and Ted are evacuees from Salford and the Luftwaffe’s destruction of the mighty industrial northwest.

We are reunited with Bobbie, wearing a tweed jacket and mannish trousers, her camel beret a nod to the green tam o’shanter perched on her head for much of the original film. ‘Do you remember arriving here?’ her daughter Annie, played by Sheridan Smith, asks. ‘Like it was yesterday,’ smiles Bobbie, as they race towards Oakworth Station for the arrival of the evacuation train.

The city children arrive amid warnings they’ll be feral, unbathed and nit-infested trouble. But from the moment the grey and brown bombed-out trackside suburbs give way to a village with buttercups in the graveyard, fresh eggs in laying boxes and communal bread-kneading sessions around the kitchen table, we know they will be just fine.

This time there is a bold storyline about racial prejudice within the American Army. It’s rooted in the real history of black US soldiers, then still segregated from white troops at home, stationed in the UK. ‘Most children’s writers give enough meat to make people think,’ Jenny observes. ‘Edith Nesbit included ‘a shabby Russian’ in the original story for the same reason.’ (Nesbit, the author of The Railway Children, published the book in 1906 and the Russian storyline reflected the turmoil of the First Russian Revolution the preceding year.) 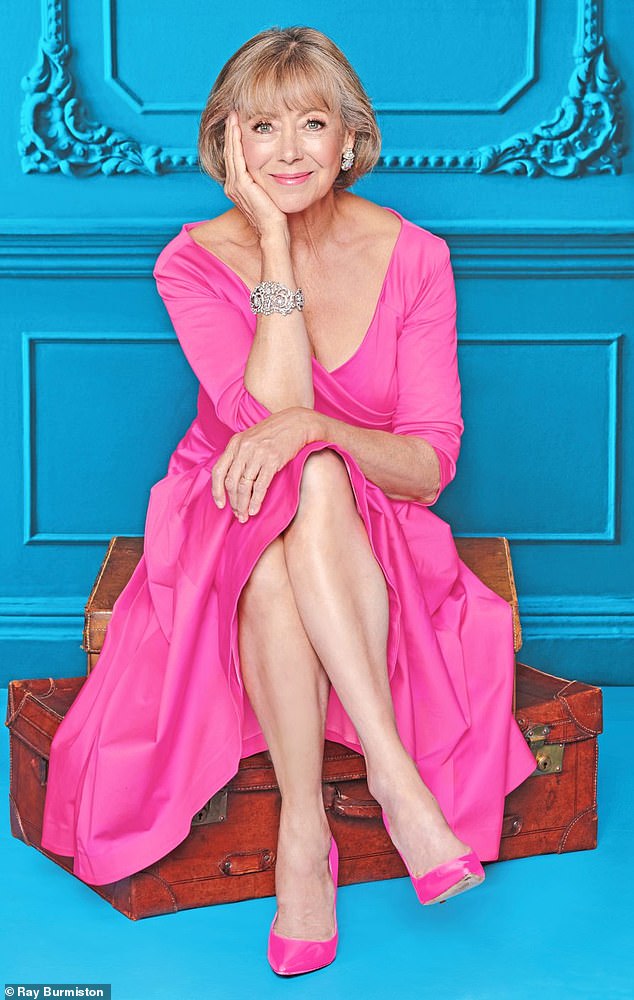 There is much more that will be familiar, chiefly the setting in Oakworth on the Keighley and Worth Valley Railway, and the glory of the age of steam. Both films are a celebration of the English countryside and a childhood spent in nature.

Even the stationmaster Richard, played by John Bradley (Samwell Tarly in Game Of Thrones) is the grandson of Perks, Oakworth station’s original porter, played more than half a century ago by Bernard Cribbins. Given her familiarity with the character (‘I have even played my own mother,’ she points out, amused), Jenny was invited to help craft the backstory of Bobbie’s life between the Edwardian era and the Second World War.

‘We decided she had been a suffragette, probably a magistrate, that she had married Jim [Bobbie’s nascent love interest in the 1970 film] and they’d had one child, their daughter Annie. We thought Jim might have been killed in the First World War so Bobbie is back in Oakworth alone, but still busy and present in her own life, still very involved.’

It baffles Jenny when people mix her up with Bobbie. ‘Somewhere she’s a part of me, a friend, but she’s not me. If I’m sitting in my car, stuck in traffic, and people behave badly and I do that [she flips the finger] and they go past and see me and say, ‘Oh! Roberta!’ I do think, ‘Aargh, oh, OK.’

But her thoughts about the older Bobbie being busy and present in life is very much akin to the actress. ‘You have to keep living your life until you die, really living too, every day, as it comes at you.’ 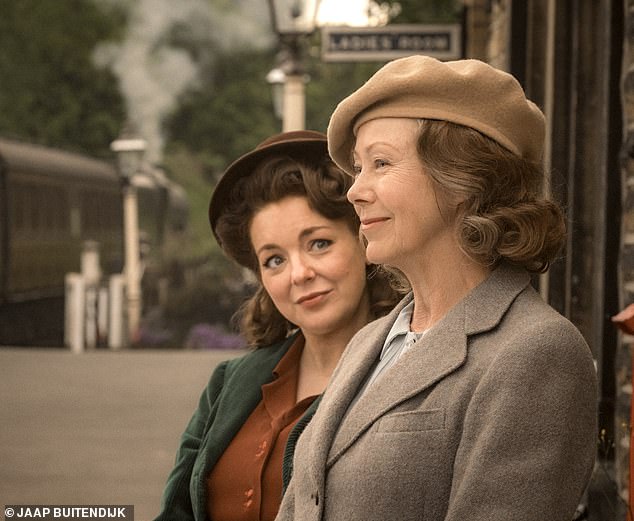 Jenny, pictured with Sheridan Smith in The Railway Children Returns, says she is not planning on retiring yet

She reveals that, far from retiring any time soon, she’s considering making her debut as a director. ‘I’ve always been late to things since I was at school being late with my homework. Why can’t I be late to being a director? I’d like to do it.

‘I’d probably start with radio. Sound is so extraordinary. Call The Midwife won’t go on forever. I don’t know what happens when it ends.’

When she does eventually bow out it will be more to do with her husband, the hotelier John Tham, to whom she’s been happily and unstarrily married since 1990. ‘It’s lovely, very, very grounding.

‘One of the things about meeting people and forming relationships as an actor is that others have an idea of who you are before they meet you. That’s hard in any relationship, particularly with men.

‘When John and I met I did not feel he had any sense of who I was at all, but he wanted to find out, and that made a big difference. I’m still finding out about him 31 years on.’ 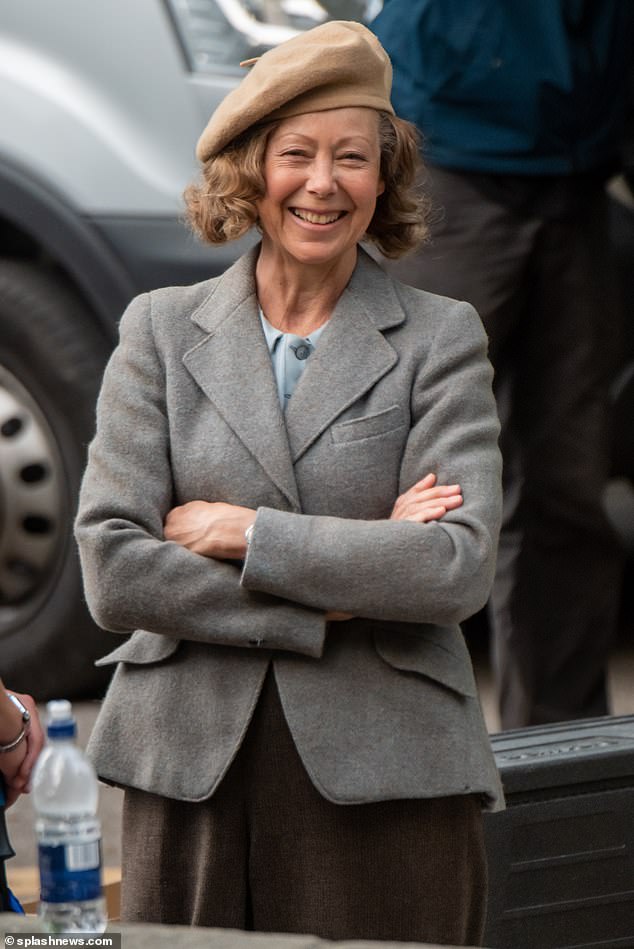 The 70-year-old, pictured filming for The Railway Children Returns, is part of a cast bringing the film to a new generation

The couple have one son, Jonathan, who’s a GP in London. They divide their time between an apartment in south London and a house on The Lizard peninsula in Cornwall.

Jenny’s a keen walker and swims frequently, either in the sea or at her local lido, where she toughs it out until the water temperature drops below about 12°C. She’s sufficiently well-maintained to be seriously thinking about wearing the same gold, pink and blue Zandra Rhodes two-piece she wore for the royal premiere of The Railway Children to the forthcoming premiere of The Railway Children Return.

Jenny was born in Somerset but lived in Germany, Singapore and Cyprus because her British Army officer father was posted there. From the age of eight she boarded at Elmhurst Ballet School in Birmingham, and was discovered aged 11 by Walt Disney when he cast her as a young dancer in his film Ballerina.

She remembers the very outset of her career in the 60s… ‘The Rolling Stones, the Vietnam War, pop art, miniskirts, my shiny daffodil yellow coat from C&A, going to the King’s Road where I knew it was all happening and thinking but where, where is it all happening!’ Now she’s heading for 70, still in her prime and reprising Bobbie, a teenage girl created in 1906, who has been part of the cultural landscape of Britain since 1970, morphing her into a 1944 grandmother on our screens in 2022.

She’s delighted to have worked out that with the 12th series of Call The Midwife being set in 1968, the Nonnatus House nuns could watch her on their black-and-white TV playing Bobbie for the very first time in that BBC series. ‘I have caught up with myself as a child. Weird!’ she snorts.

Many people have The Railway Children embedded in their childhood and now it’s here for a new generation. Bobbie’s railway station still represents all the tear-spattered reunions and partings in our own lives; the children stand once more for hope, resilience and love. Watching them have the gumption to save the day – again – is as comforting as a mug of tea and a big fat piece of Yorkshire parkin.

The Railway Children Return is in cinemas from Friday 15 July.