“The stroke I had on May 13 didn’t come out of nowhere,” Fetterman said in a statement. “Like so many others, and so many men in particular, I avoided going to the doctor even though I knew I wasn’t feeling well. I almost died because of that.’

Fetterman said the stroke was the result of a heart condition first diagnosed in 2017.

‘In 2017 I had swollen feet and I had to go to the hospital for a check-up. Then I heard I had a heart condition. Then I didn’t follow it. I thought losing weight and exercising would be enough. Of course not,” he said.

Fetterman said he was on blood thinners but “didn’t do what the doctor told me.”

He said his May 13 stroke would have been “completely preventable” had he simply stayed on the medication. Instead, he got a pacemaker on Election Day.

“My cardiologist said that if I had kept taking the blood thinners, I would never have had a stroke,” Fetterman says.

‘But I will not make that mistake again’, promised the current Lieutenant Governor.

Pennsylvania Democratic Senate nominee John Fetterman admitted in a recent photo with his children that he “nearly died” from a stroke just days before the Commonwealth primary. 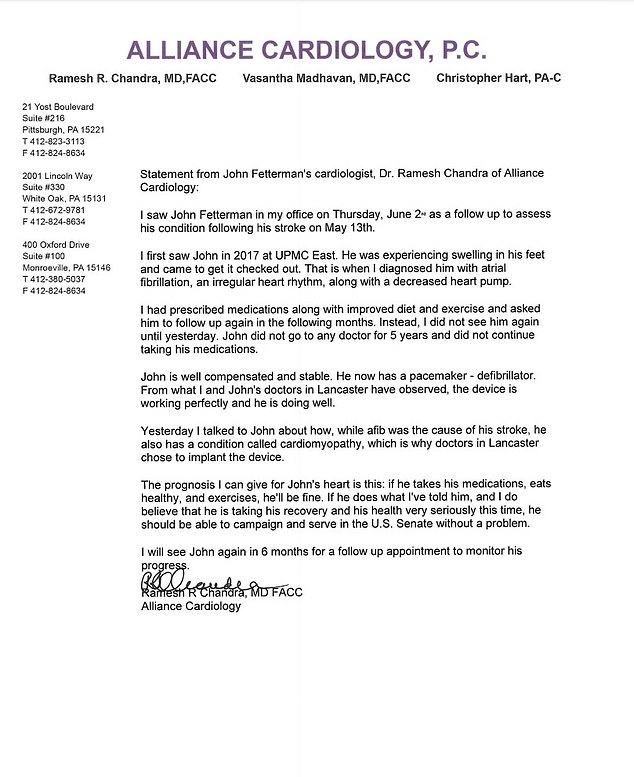 His campaign also released a letter to Dr. Ramesh Chandra, who was the one who diagnosed the Democrat with atrial fibrillation in 2017

Fetterman’s campaign also sent a doctor’s note from Dr. Ramesh Chandra, who was the one who diagnosed the Democrat with atrial fibrillation in 2017.

“John did not see a doctor for five years and did not continue to take his medicines,” Chandra confirmed.

The doctor said Fetterman also has a condition called cardiomyopathy, so his medical team in Lancaster inserted the pacemaker.

“The prognosis I can give for John’s heart is this: if he takes his meds, eats healthy, and gets exercise, he’ll be fine,” Chandra continued. “If he does what I told him, and I believe he takes his recovery and his health very seriously right now, he should be able to campaign and serve in the US Senate without any problem.”

Fetterman and his doctor’s statements came after reports from the state suggested Democrats were getting nervous about his chances of winning one of the most important Senate races of the year, as he still hasn’t specified when he’ll return to the campaign trail.

He runs to fill the seat occupied by outgoing Pennsylvania Republican Senator Pat Toomey — one the Democrats believe can turn around in an otherwise difficult year. 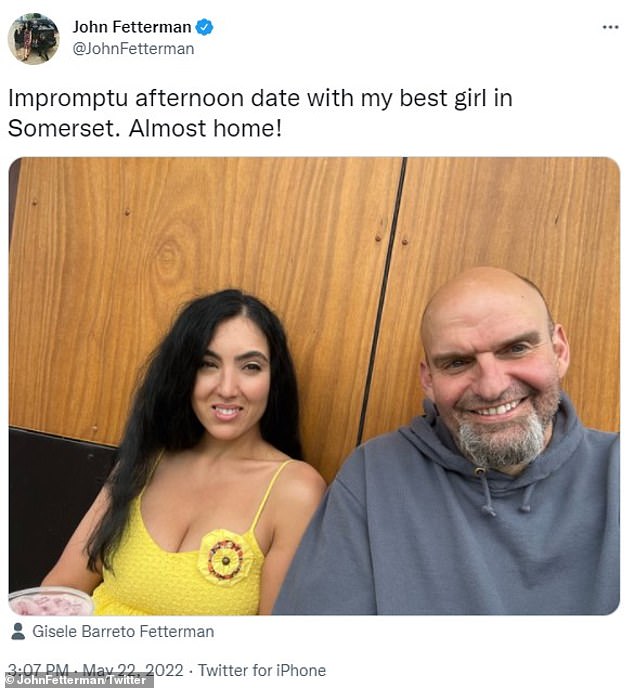 The statements from Fetterman and his doctor came after reports from the state suggested Democrats were becoming jittery about his chances of winning one of the most important Senate races of the year. Fetterman with wife Gisele on the day he left hospital after his stroke

He also joked in a tweet on Friday that he couldn’t be the wanted ‘Pierogi burglar’. Pierogies are a Polish delicacy, popular in Western Pennsylvania

NBC News quoted a Pennsylvania Democrat elected to a story Thursday who said, “A lot of Democratic Party types are very nervous about it.”

That official said Fetterman needed to be transparent about what was going on with his health.

Recent tweets showed that on May 22 Fetterman and his wife Gisele stopped in Somerset, Pennsylvania on their way home to Braddock from the hospital in Lancaster, where he had been since his May 13 stroke.

He also joked in a tweet on Friday that he couldn’t be the wanted ‘Pierogi burglar’. Pierogies are a Polish delicacy, popular in Western Pennsylvania.

‘Don’t look at me, my alibi is rock solid. I am resting + recuperating at home in Braddock,” he wrote.

But for state Democrats, the situation had become so worrying that some refreshed their knowledge of the state ballot replacement bill, NBC reported.

That deadline is in August.

“Doctors have told me to keep resting, eat healthy, exercise and focus on my recovery, and that’s exactly what I’m doing,” Fetterman said Friday. “It will take a little longer to get back on the campaign trail as I was leading up to the primaries.”

“It’s frustrating – especially since it’s my own fault – but be patient, I need a little more time. I’m not quite back to 100 percent yet, but I’m getting closer every day,” he continued.

“This race is so important for Pennsylvania and for the country. I will be ready and can’t wait to get back on the road,” added Fetterman.

Fetterman will participate in the general election vote against Dr. Mehmet Oz or David McCormick, as a recount continues as to who will be the Republican winner in that race.