Johnny Depp tucked into a traditional British fish and chips and washed his meal down with Newcastle Brown Ale on a surprise visit to Tyneside yesterday, staff have revealed, as he celebrated winning his high-profile defamation case with Amber Heard.

The Pirates of the Caribbean star left fans stunned after he was spotted sitting inside a pub with musician Sam Fender, just as jurors reached a verdict in his multimillion-dollar US lawsuit against his ex-wife.

Onlookers said he thoroughly enjoyed his meal at The Bridge Tavern in Newcastle, where a portion of ale-battered fish, triple-cooked chips, mushy peas and tartare sauce costs £14.

The meal is clearly a regular hit with customers, with one Tripadvisor review stating: ‘Round up all of the Fish and Chip shop owners in the North East, treat them to easily the best beer battered Fish, Chips, Mushy Pes and Tartar Sauce north of Whitby and show them how it’s done properly.’

She said: ‘I was on the day shift and it had been a normal day and he just waltzed in. He walked through the front door and sat on the table in the corner and had some scran.

‘He was drinking Brown Ale and had some food. He was really sweet and told us he’d never been to Newcastle before. He ordered fish and chips with his Brown Ale and he had a Guinness after that as well.’

The actor was seen shaking hands with supporters upon leaving the pub last night, where staff hailed his friendly demeanour as he chatted with one barmaid about her baby bump.

Johnny Depp tucked into a traditional British fish and chips and quizzed punters about the Tyne Bridge on a surprise visit to Newcastle yesterday, staff have revealed – just hours before winning his high-profile defamation case with Amber Heard 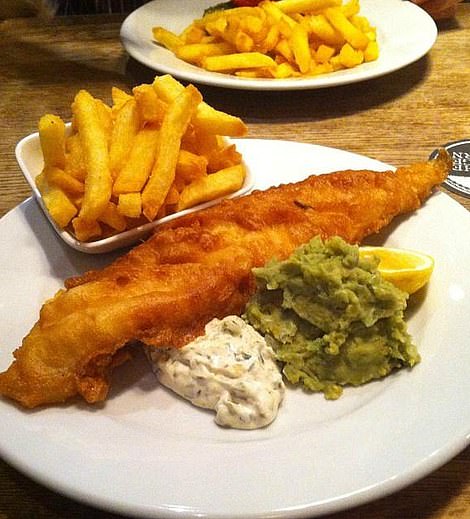 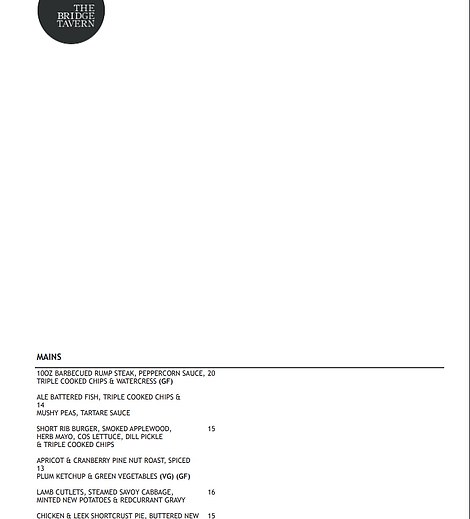 Onlookers said he thoroughly enjoyed his meal at The Bridge Tavern in Newcastle, where a portion of ale-battered fish, triple-cooked chips, mushy peas and tartare sauce costs £14 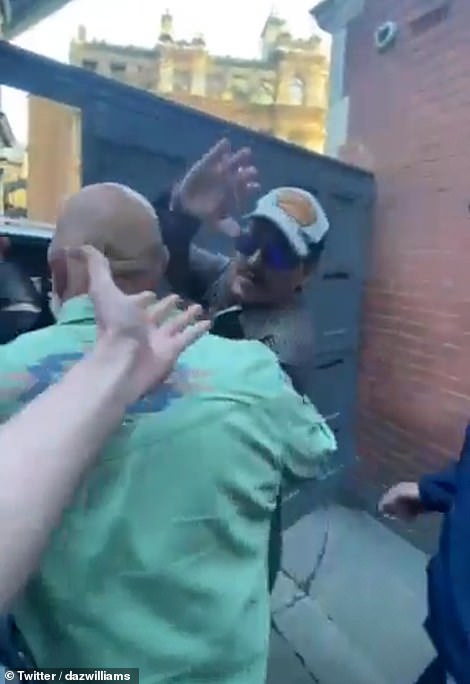 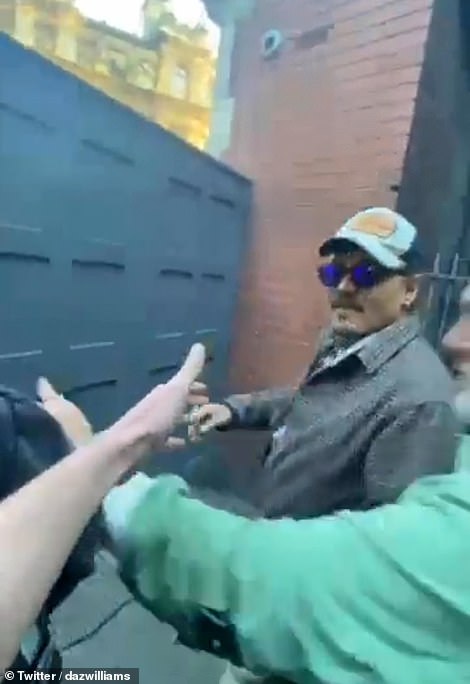 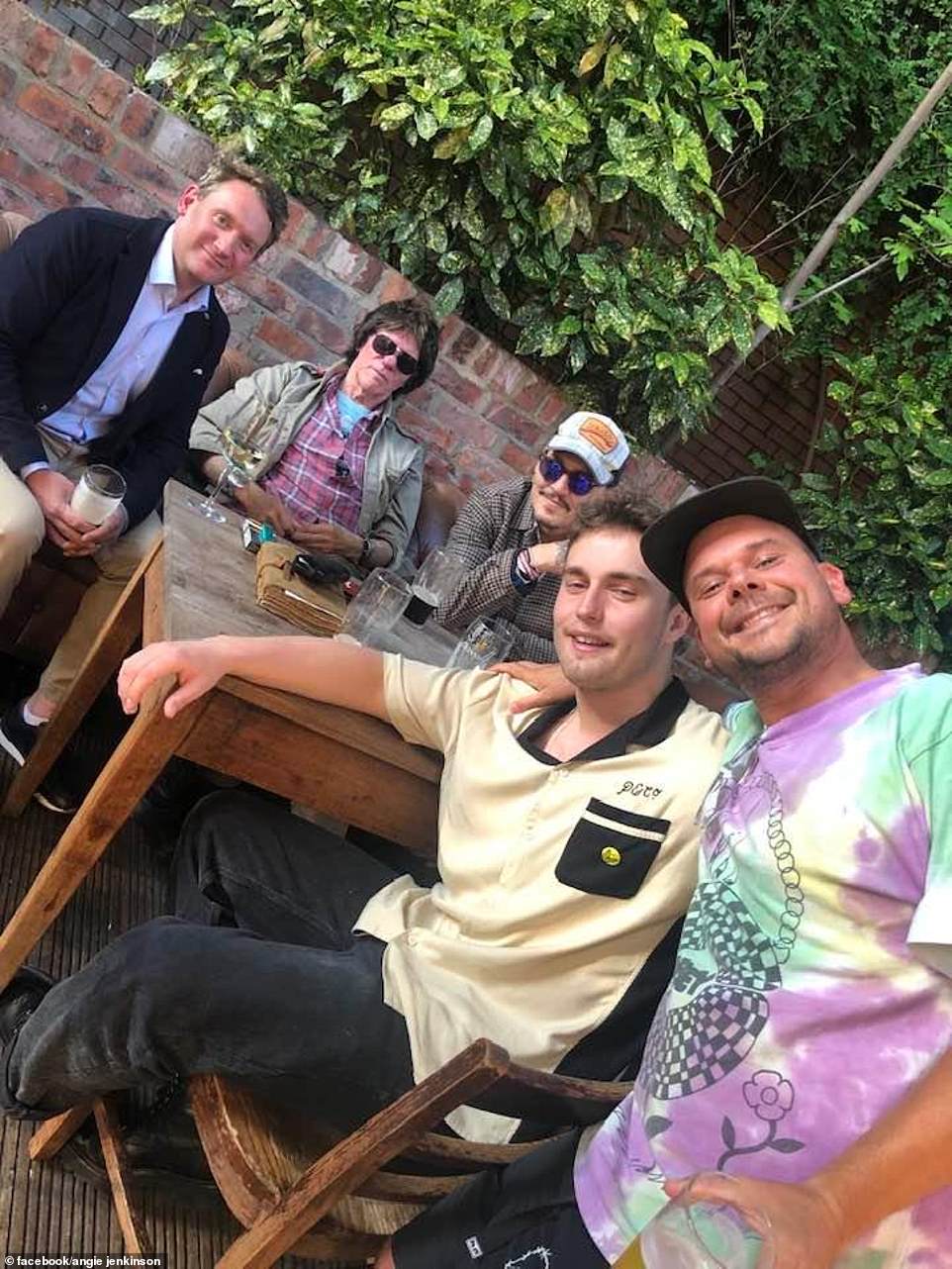 Depp was seen in the pub with musician Sam Fender, just hours before a verdict was reached in the high-profile defamation case

Naomi, 22, added: ‘Sam Fender came in a couple hours afterwards which was mad. We didn’t have the heads up that they were coming so we ended up giving them the area upstairs.

‘Nobody was bothering Johnny inside, but there were some people waiting outside, which you can understand. ‘People were just excited he was here. I got to chat to him in the outside area. It wasn’t for long but it was nice.

‘He was asking about Newcastle because he had never been before and he was interested in the Tyne Bridge and the pub. He seemed genuinely interested and for him to come here was amazing.

‘There was no mention of the court case or anything like that. We are Geordies so we like to keep things casual. We probably won’t ever have another shift like that again. I’ve only ever seen actor Daniel Ryan in here before.

‘The whole thing was just so crazy but it was also fun. Everyone was in good spirits and the pub was busy which was good. He was the soundest bloke ever and was happy to stop and chat to people.

‘After we locked up last night I checked social media and it was crazy. I know he’s playing at the Sage tonight and who knows he might even come back!’

General manager Janine Latchford added: ‘Johnny came in first, he was with some friends but he was quite cool. He didn’t want anyone to see who he was.

‘We gave him a private space and he was the loveliest man I have ever seen in my life. My assistant is heavily pregnant and he was telling her how beautiful being a parent was. He was really down to earth, he was lovely.

‘He was incredible. He gave me a hug and I told him that I loved him pretty much as soon as I saw him! He loved the art work and he was asking questions about the Tyne Bridge. He said he’d never been to Newcastle before.

‘He was having fish and chips, he said the food was amazing.’

The 33-year-old, who lives in Jesmond, said that when Depp first came into the pub at around 5pm he was sat in the corner eating his food. She said the pub gave him the room upstairs where he met Fender, who is from North Shields.

Janine said: ‘I don’t think Sam had met Johnny before. Johnny is doing a show [later] at The Sage. Whoever he was with must have known Sam Fender so they arranged to meet. Sam Fender came about half an hour later when the terrace was closed off.’

Janine added: ‘It was unbelievable for the pub, I have never seen anything like it before. It has been the most surreal day of my life without doubt! It’s insane.’

An excited punter, who did not want to be identified, described seeing the pair in the pub. She said Johnny was wearing sunglasses and a cap.

The woman said: ‘He was here enjoying a soft drink. Sam Fender was chilling with him. I felt sheer excitement, it’s Johnny Depp in Newcastle! He wasn’t disguising himself, he was just smiling.’

Gary Spedding chatted with the 58-year-old celebrity in the pub and posed for a picture with him, saying: ‘He seemed like a really nice bloke. He was humble and gracious.

‘I could see that he was leaving the pub as he was saying goodbye to some people. I approached him and wished him good luck and shook his hand. He said thank you, and gave us a wink and a smile.

‘He seemed happy and relaxed. He had been sitting in the beer garden downstairs, but he was getting a lot of attention so he was moved to a private area upstairs. I am not the type to get starstruck, but I enjoyed meeting him.’ 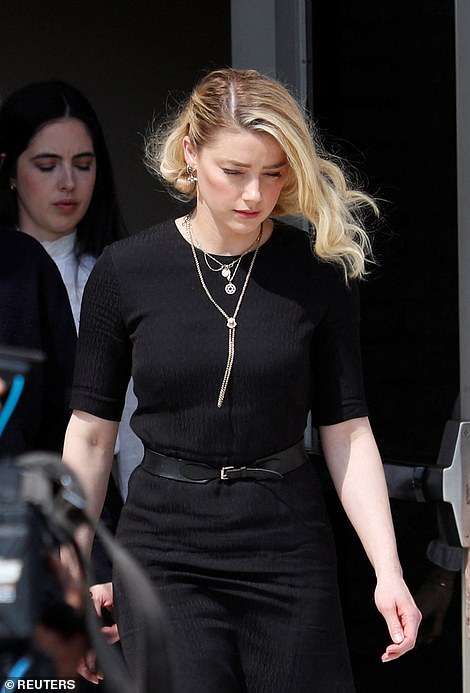 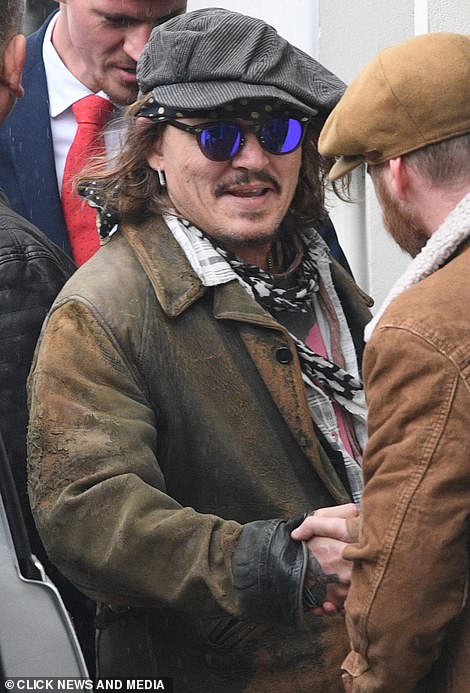 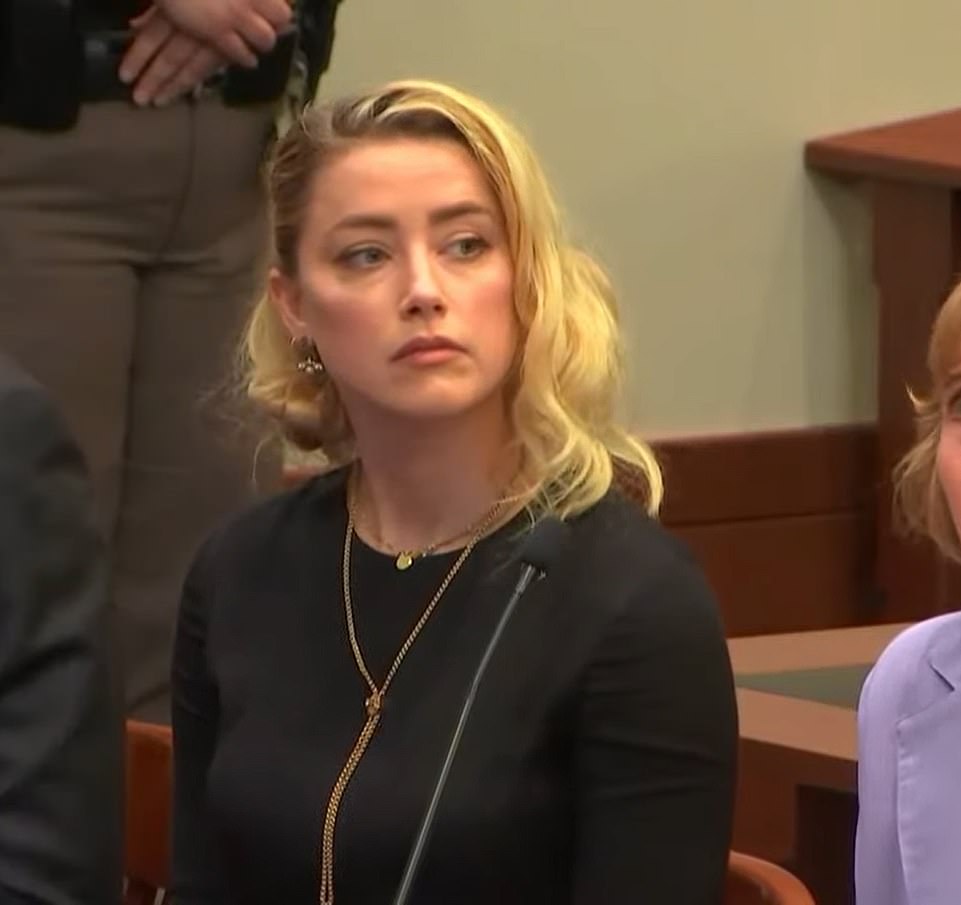 Heard, 35, countersued for $100million claiming that Depp’s lawyer Adam Waldman made defamatory statements by calling her claims a ‘hoax’ 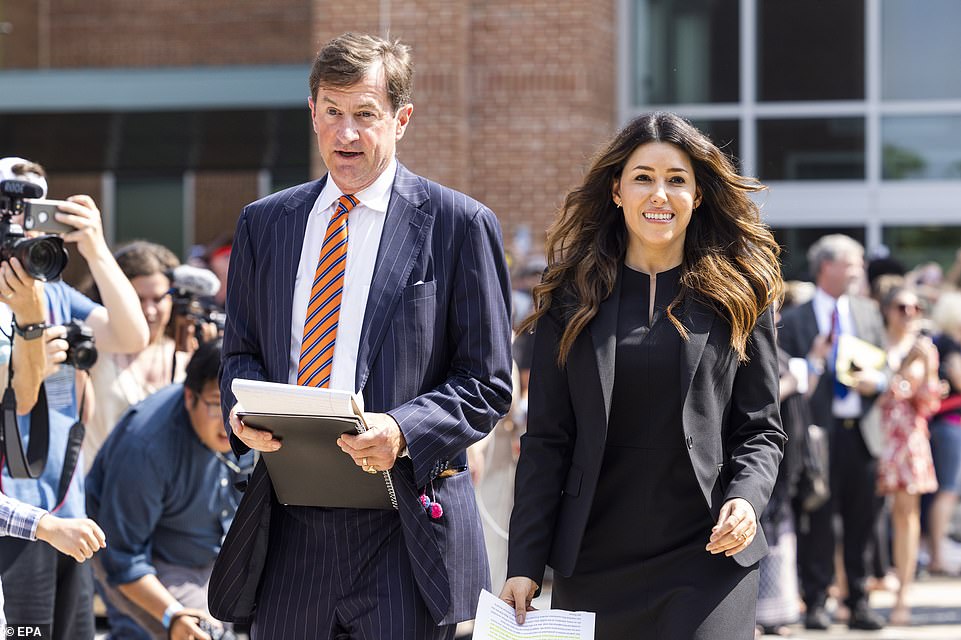 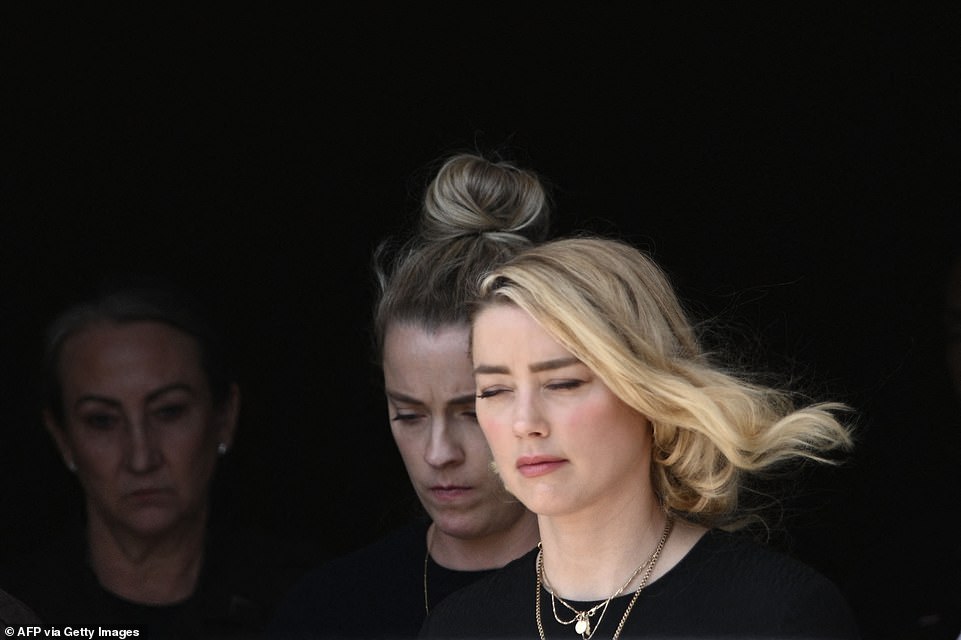 As she left court Heard looked downcast while climbing into a truck with blacked out windows with her sister Whitney. A member of her legal team could be seen putting her hand on her back as she got in 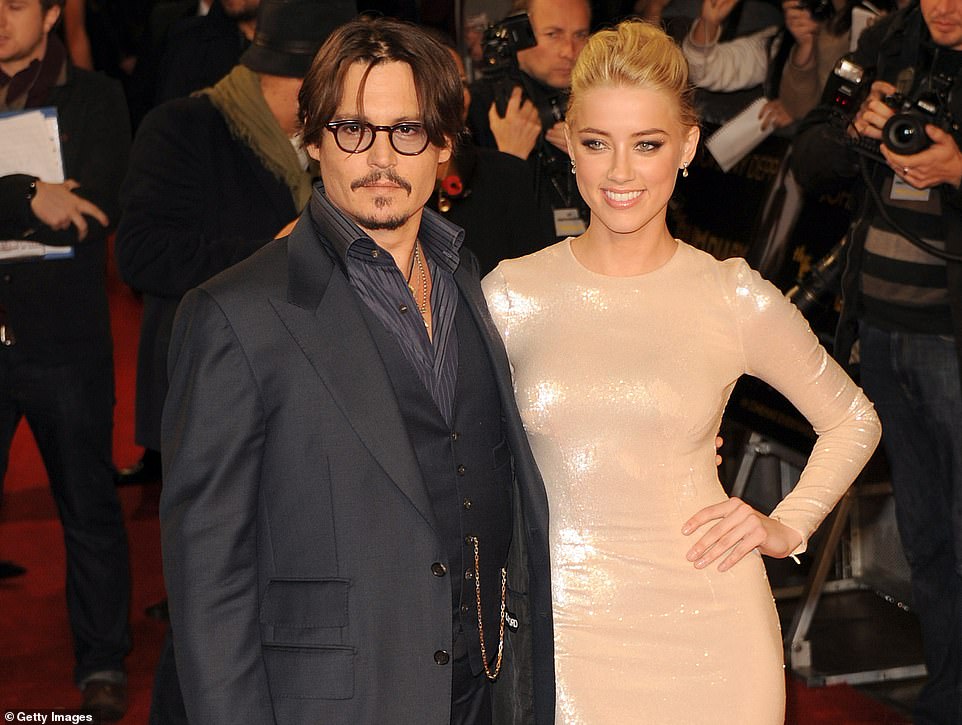 Over six weeks at the court in Fairfax, Virginia, Depp called 38 witnesses while Heard called 24. Depp and Heard met on the set of the 2011 movie The Rum Diary, turning up on the red carpet together for its London premiere in 2011

Depp yesterday declared he had ‘got his life back’ after it was ruled he was defamed in his libel case with Heard and was awarded millions in damages.

After less than three days of deliberation, the jury ruled in favor of all three of Depp’s defamation claims against Heard, finding that she had falsely accused him of domestic abuse.

The actor was awarded $15million – $10million in compensation and $5million in punitive damages.

Heard meanwhile won just one of her three countersuit claims, which related to statements made by Depp’s lawyer suggesting she and friends had trashed their apartment before calling the police out.

She was awarded $2million in compensatory damages out of the $100million she was seeking in her countersuit against her ex-husband and received zero dollars in punitive damages.

The judge later reduced Depp’s $5million punitive damages award to the Virginia maximum of $350,000, reducing Depp’s total to $10,350,000 – minus the $2million he was ordered to pay Heard, meaning Depp walks away from the case with $8.35million.

Heard said in a statement following the verdict: ‘The disappointment I feel today is beyond words. I’m heartbroken that the mountain of evidence still was not enough to stand up to the disproportionate power, influence, and sway of my ex-husband.

As she left court, Heard looked downcast while climbing into a truck with blacked out windows with her sister Whitney. A member of her legal team could be seen putting her hand on her back as she got in.

Heard’s spokesperson Alafair Hall told The New York Times she now plans to appeal the jury’s verdict, though it is not clear on what grounds she seeks to do so.

To be granted an appeal, Heard would likely need to demonstrate that there were errors in the trial, or in the presiding judge’s reading of the law.

She would also need to post bond of the full $10,350,000, plus interest charges over the course of an appeal trial.

Social media – which has been overwhelmingly pro-Depp throughout the duration of the trial – exploded in when the verdict was announced, with the hashtags #TruthWins and #JusticeForJohnny trending for hours.

Depp is expected to make an appearance on stage with Jeff Beck during his show at The Sage in Gateshead this evening.

Glossier has 20% off everything including skincare, makeup and perfume for a limited time