Johnny Depp took to the stage with guitar legend Jeff Beck in Glasgow on Friday night to hoards of female fans chanting: ‘Innocent, innocent’, following his defamation victory against his ex-wife Amber Heard this week.

The actor, 58, has been in the UK to join Beck, 77, on his tour and previously made an appearance during his friend’s gig at the Sage Gateshead in the north of England on Thursday.

Fans in Scotland treated him like a long lost Beatle as he sang and played rhythm guitar while mumbling his way through a number of hits including Marvin Gaye’s What’s Going On and The Beatles hit Paperback Writer.

But Depp’s set at the Royal Concert Hall was repeatedly interrupted with fans eager to voice their support.

They chanted, ‘Johnny, Johnny’, ‘Innocent, Innocent’ and ‘Johnny Depp, Johnny Depp’ with some Beck fans pleading with them to ‘shut up’.

It came after Depp sued his ex-wife Heard, 36, for $50million over a 2018 piece she had written that alleged she was a victim of domestic abuse.

Depp won the trial by jury in Virginia in the US this week, meaning he is set to receive millions in compensation from Heard.

His victory was well-received by his fans, and despite Beck being billed as the main attraction in Glasgow on Friday – it was his tour after all – the audience only really came to life when Depp took to the stage. 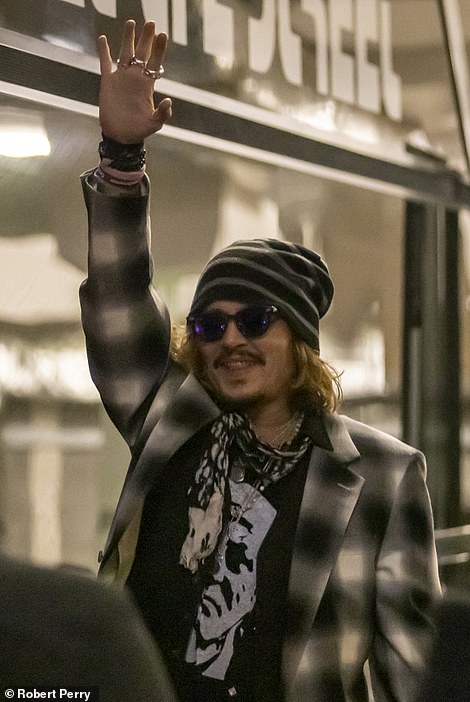 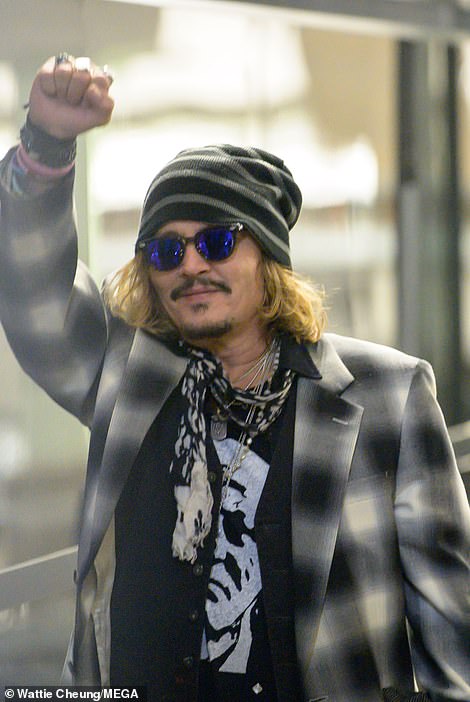 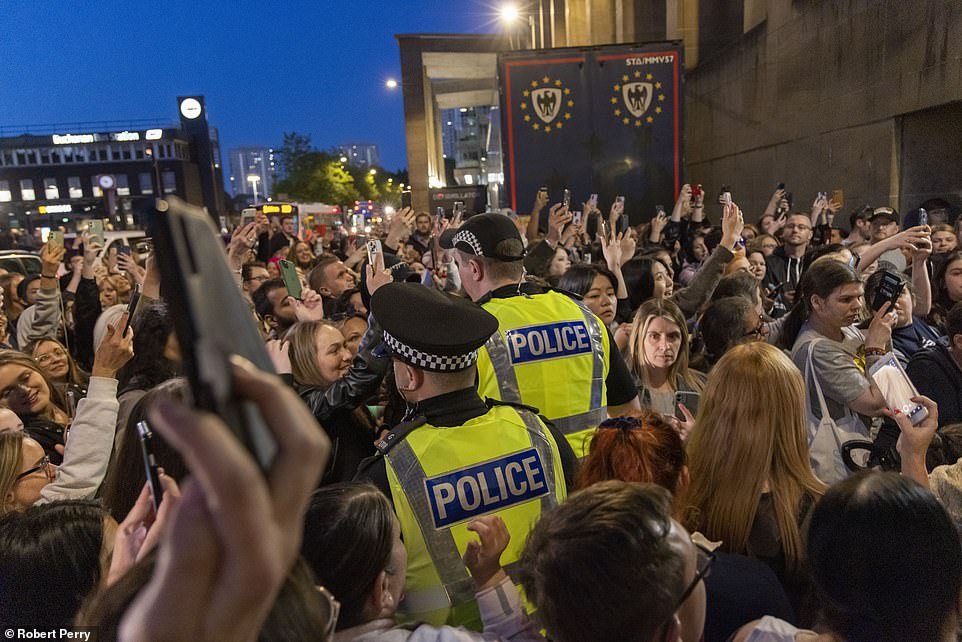 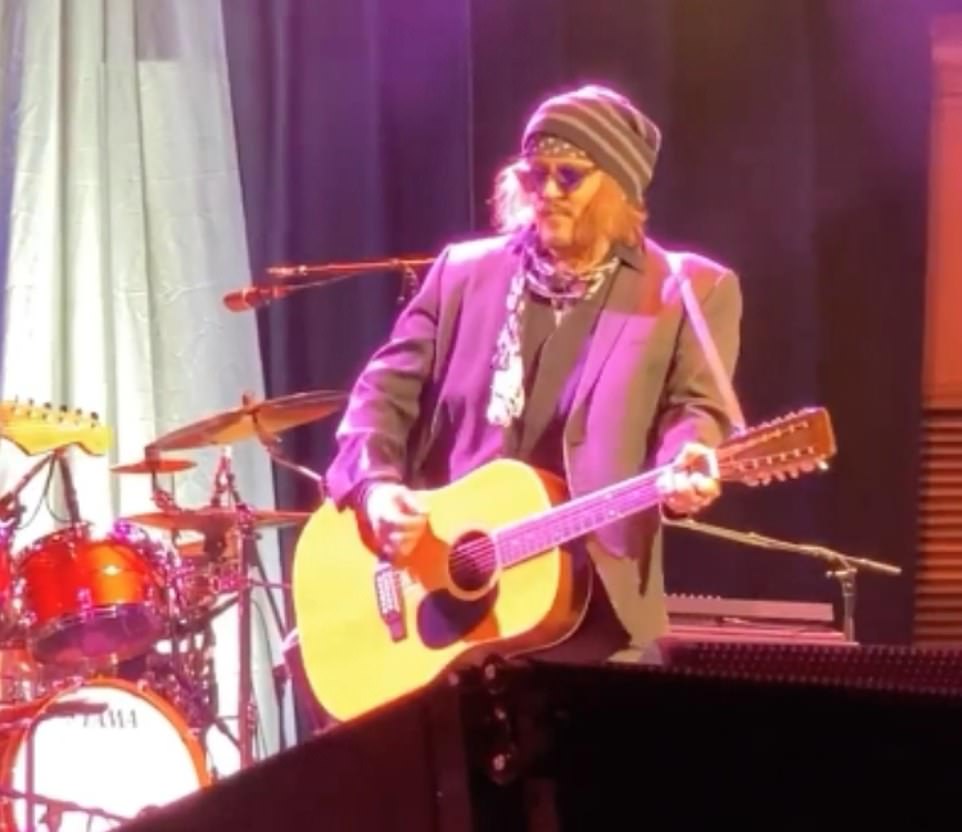 Earlier he had waved to fans outside the Dakota Hotel where he had been staying and very briefly posed for selfies, before arriving to the Royal Concert Hall venue via the stage door, only to be ushered inside by security.

Fan Jane Donaldson, 38, was one of the lucky few who managed to get a word with the Pirates of the Caribbean star.

She told MailOnline: ‘He said it was great to be in Glasgow and that he hoped I was coming to the concert.

‘I told him his fans are right behind him and he thanked me. He’s so sweet, really.’

Fans who had waited for several hours to get a glimpse of the actor were delighted when he appeared after the show to wave to fans and blow kisses before hopping on the tour bus.

Some of those hoping to get a glimpse of the star outside the city’s Royal Concert Hall were so excited they also started screaming when they thought he had come to meet them dressed as Captain Jack Sparrow.

Instead it was Johnny Depp impersonator, Graham Stevens, who said: I’ve been following in his footsteps for the last 12 years.

‘I met him at the Premiere in 2010 and I’m here tonight to get behind him and show support.’ 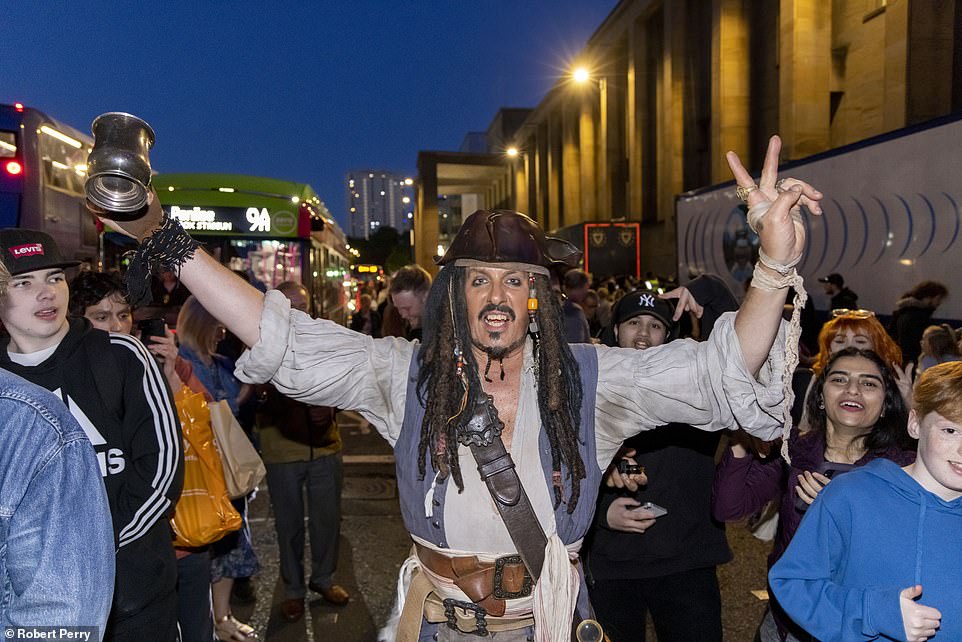 Some of those hoping to get a glimpse of the star outside the city’s Royal Concert Hall were so excited they also started screaming when they thought he had come to meet them dressed as Captain Jack Sparrow. Instead it was Johnny Depp impersonator, Graham Stevens (pictured). 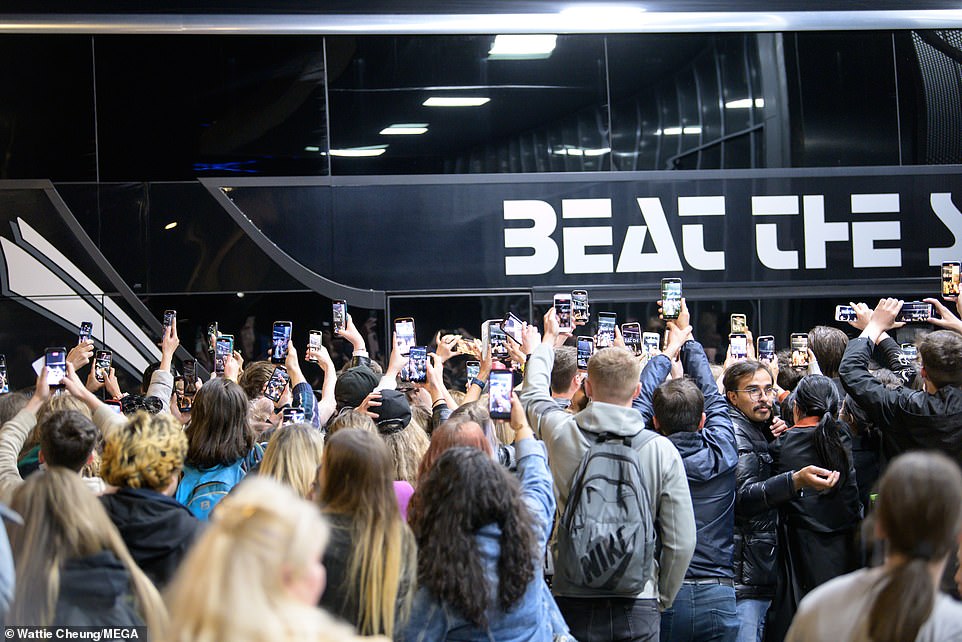 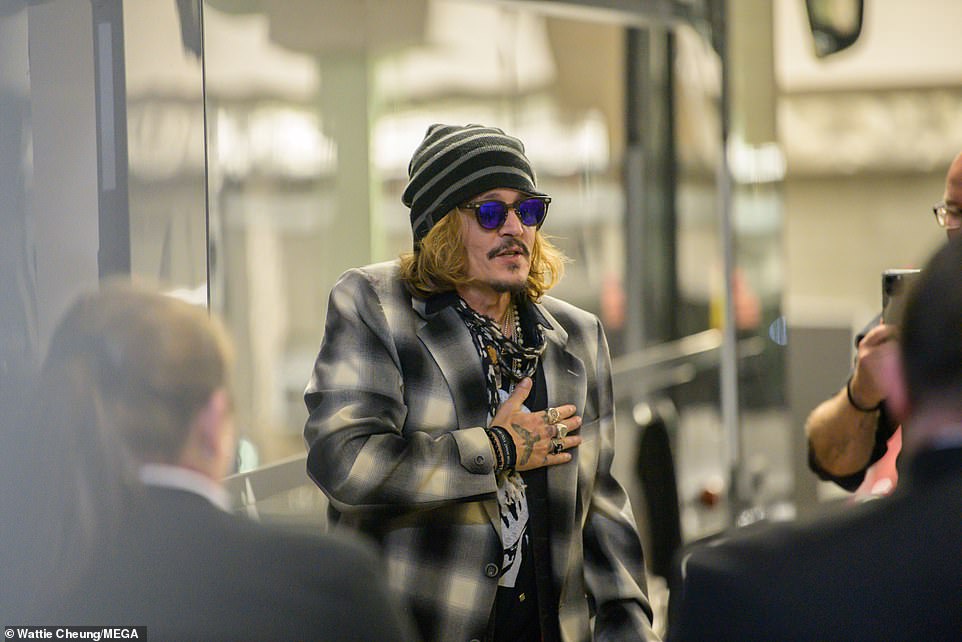 Beck’s live appearance, which followed UK dates including shows in London and Sheffield, coincides with the news that he is planning to release a new album next month.

In Glasgow, Beck, who has collaborated with Depp on the new material, said: ‘When I first asked Johnny to do the blues with me he told me to f**k off. Everything is the blues. We have a new album coming out hopefully in July.’

Though there is no official release date or title for the album, Beck has admitted to the fact that he sees Depp as a friend as well as a touring buddy.

He said: ‘I’m going to take this opportunity to tell you that I met this guy five years ago and we haven’t stopped laughing since. We actually made an album.

‘I don’t know how it happened. It will be out in July.’

In addition to the album, Depp has an upcoming role as King Louis XV in his first feature film in almost three years.

Jeanne du Barry tells the story of Jeanne Bécu who was born as the illegitimate daughter of an impoverished seamstress in 1743 and went on to rise through the Court of Louis XV to become his last official mistress.

In a statement following his defamation lawsuit against Heard, he hailed the start of a ‘new chapter’.

The actor had arrived to Glasgow during the early hours of Friday morning, when he was ushered into the Dakota Hotel in the city centre by his security team.

He will make an appearance and play at Beck’s next gig in Manchester on Saturday night.

Depp was seen greeting fans in Glasgow and posing for selfies with the crowd of supporters ahead of Friday night’s gig. 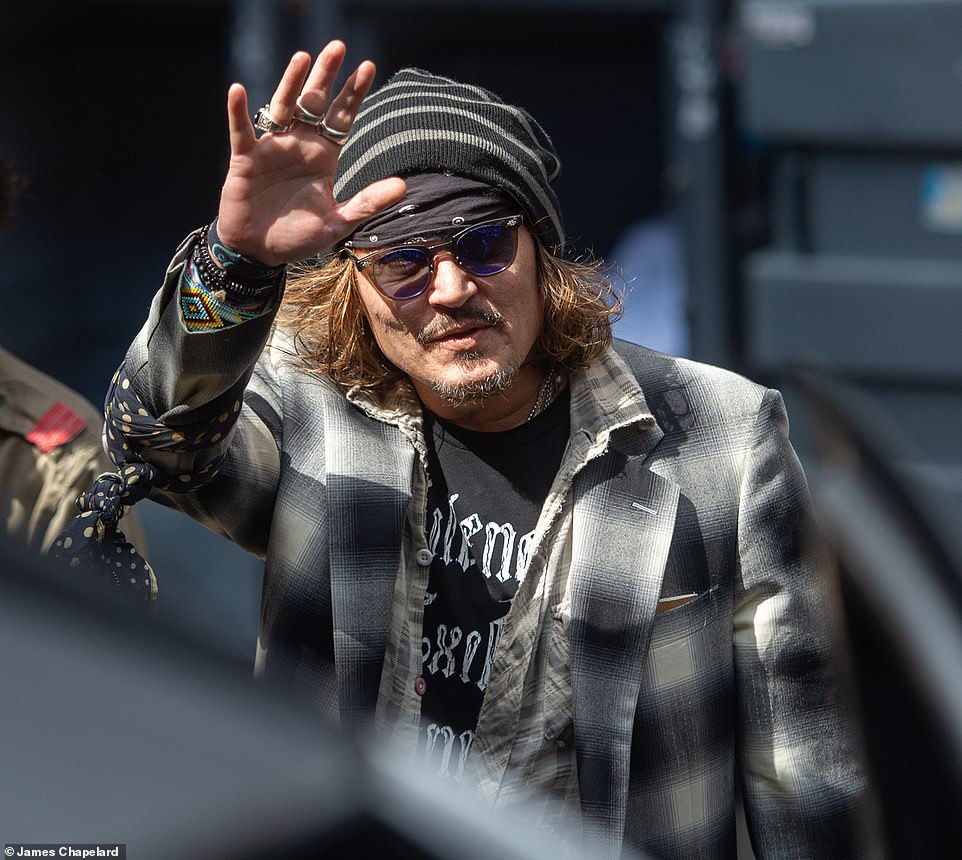 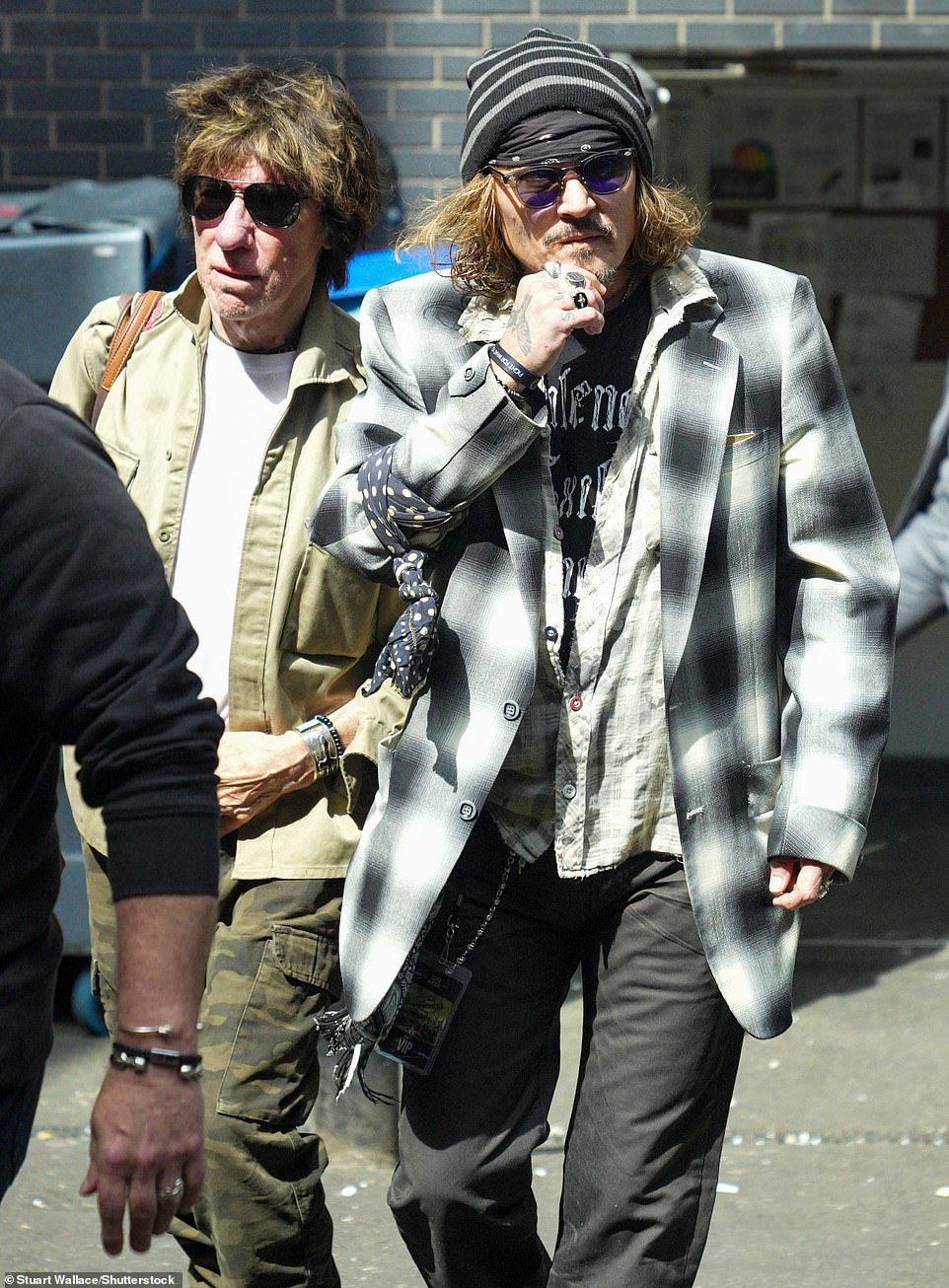 He will play with Beck (left) at the Glasgow Royal Concert Hall on Friday, June 3, before heading to Manchester’s O2 Apollo for another gig on Saturday 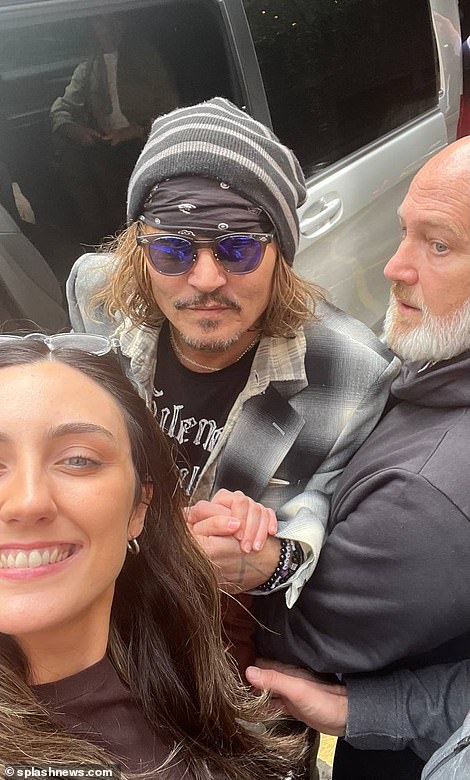 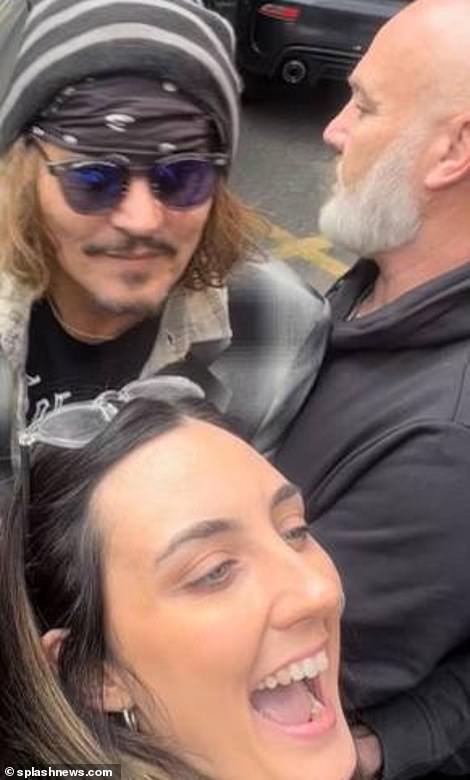 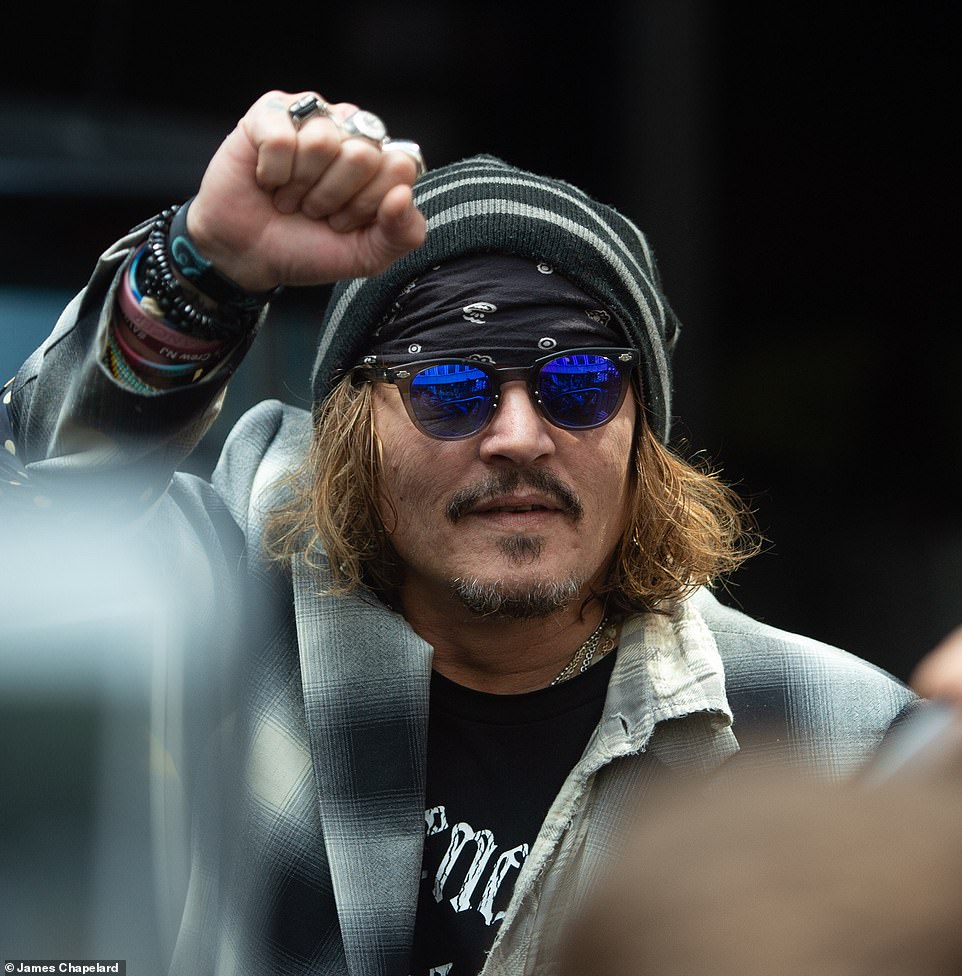 Depp learned he will walk away with millions of dollars after he won his US defamation case against his ex-wife Amber Heard on Wednesday.

The actor seemed in good spirits as he came out to greet well-wishers after the concert in Gateshead, signing autographs and posing for photos with a crowd of roughly 200 people who had waited by the stage door to see him leave.

After fans congratulated him on winning the suit the Pirates of the Caribbean star laughed and said: ‘Thank you, I’m still in shock a little.’

Depp also joked about the finger he claims Amber Heard severed during a fight they had in Australia, an ordeal he spoke about in court.

As he signed autographs he smiled, leant down, pointed at a little boy’s fingers and said: ‘You have five, I have four and seven eighths. Mad.’

During the trial he said: ‘She [Amber Heard] had thrown a bottle of vodka and cut my finger off. The tip of my finger. A good chunk.’

Jay Phillips, 30, a dog groomer from Gateshead, was standing near the boy when Depp spoke about his finger. She said Depp was ‘humble and sincere, constantly thanking everyone’.

She told MailOnline: ‘He’s a very sweet and kind man. Not many A-list celebs would stand greeting fans in the rain. The child asked about Captain Jack and Johnny proceeded to tell him a story about it and asked the kid for a high five.’

Earlier that night Depp was cheered as he returned to the stage after winning his lawsuit over ex-wife Amber Heard.

As he strode onto the stage he was greeted with rapturous applause from the crowd, while Beck quipped: ‘There’s someone here. You may not know who it is…’ Beck went on to reference the actor’s court victory the day before as he shouted: ‘What a result. What a result!’

Depp beamed as he made his way onto the stage before playing guitar and singing a selection of rock ballads with rockstar Beck, who he met five years ago.

The actor also left to cheers and applause before returning for an encore where the pair played The Beatles song A Day in the Life, which ended with Depp and Beck embracing.

Beck told the crowd they had collaborated on album that was ‘coming out in July’ before adding, ‘Really, the s**t he has been through.’

Depp joined Beck at the Royal Albert Hall in west London last Monday and Tuesday night after surprising fans with an appearance at Sheffield City Hall on Sunday. He will continue on Beck’s UK tour, playing in Glasgow on Friday, Manchester on Saturday, Birmingham on Monday and York on Tuesday. It is thought the tour was planned before Depp’s trial date in the US was set.

It comes after Depp sued his ex-wife Heard, 36, for $50million over a 2018 piece she had written that alleged she was a victim of domestic abuse. 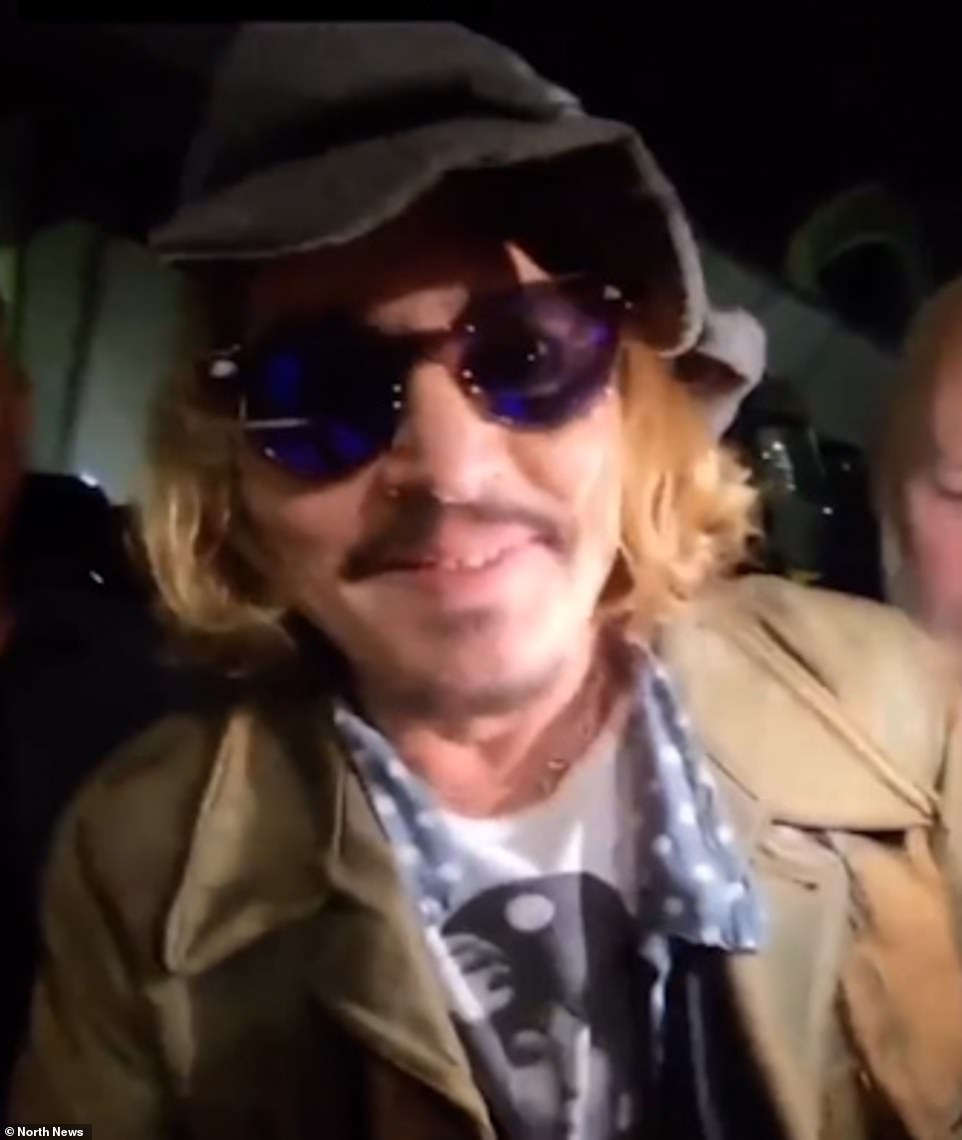 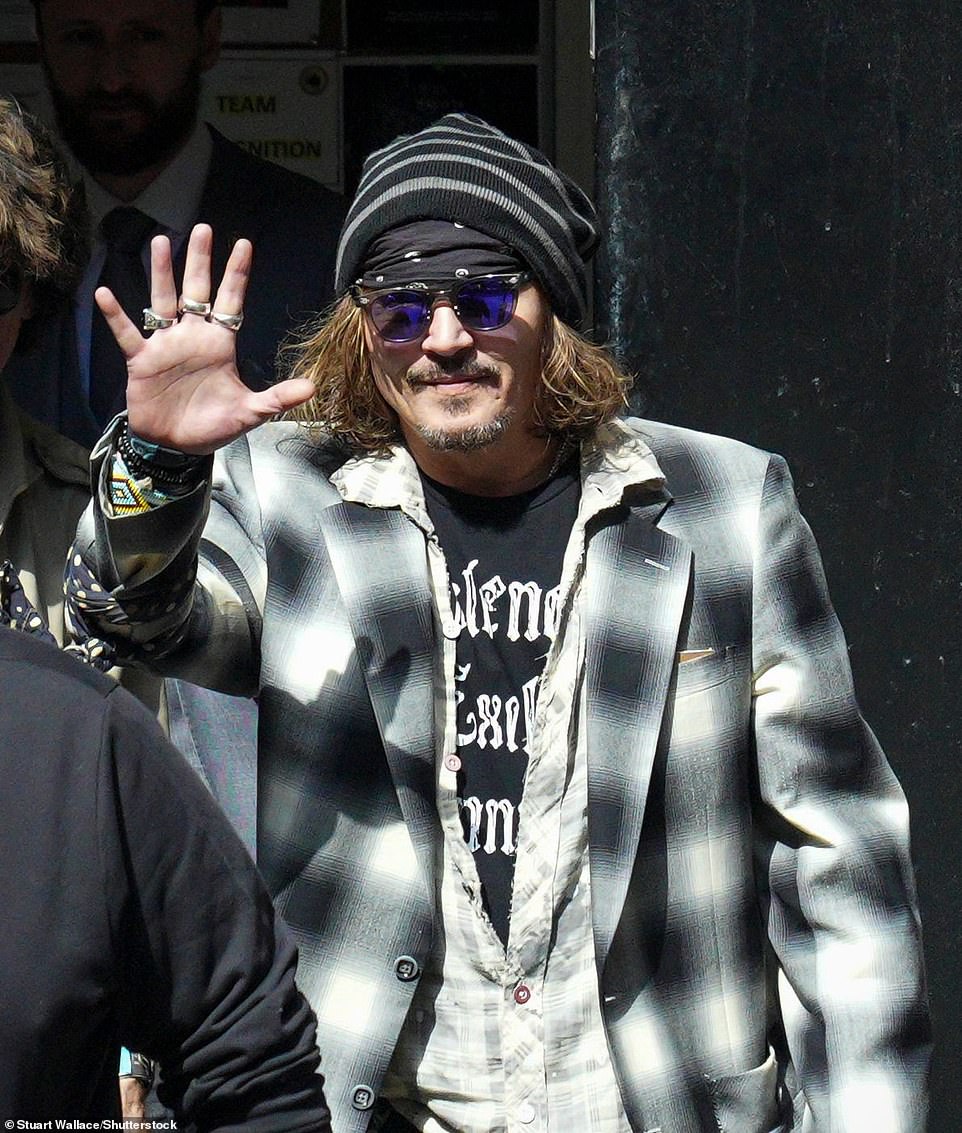 The actor, 58, has been in the UK to join Beck, 77, on his tour and made an appearance during his friend’s gig at Sage Gateshead in the north of England on Thursday night 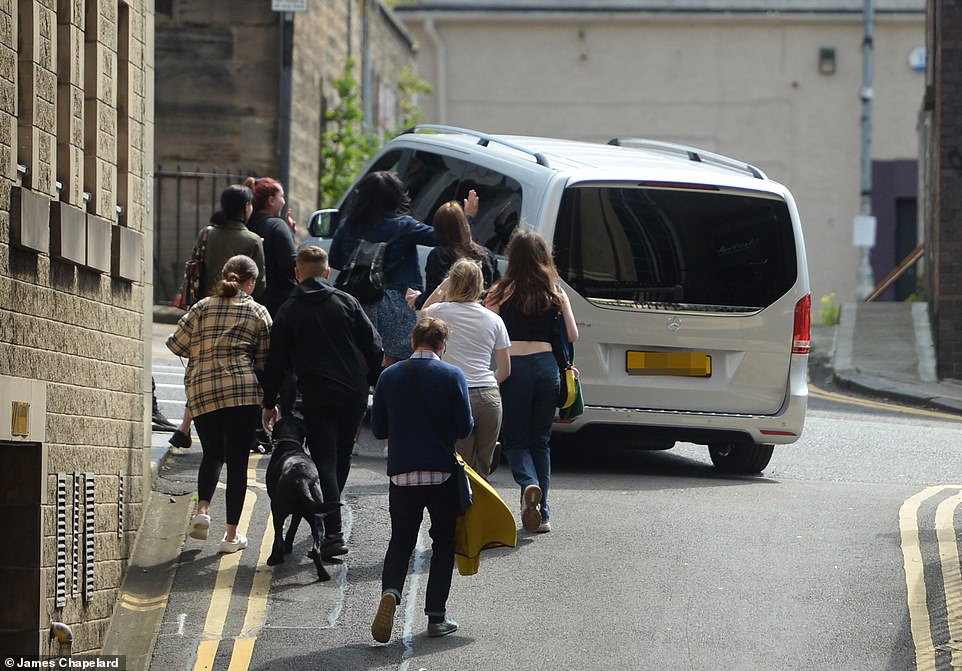 Heard countersued him for $100million, claiming that Depp’s lawyer Adam Waldman made defamatory statements by calling her claims a ‘hoax’.

Depp won the suit and was awarded $15million — $10million in compensation and $5million in punitive damages.

Heard won just one of her three countersuit claims, which related to statements made by Depp’s lawyer suggesting she and friends had trashed their apartment before calling the police out.

She was awarded $2million in compensatory damages out of the $100million she was seeking in her countersuit against her ex-husband and received zero dollars in punitive damages. 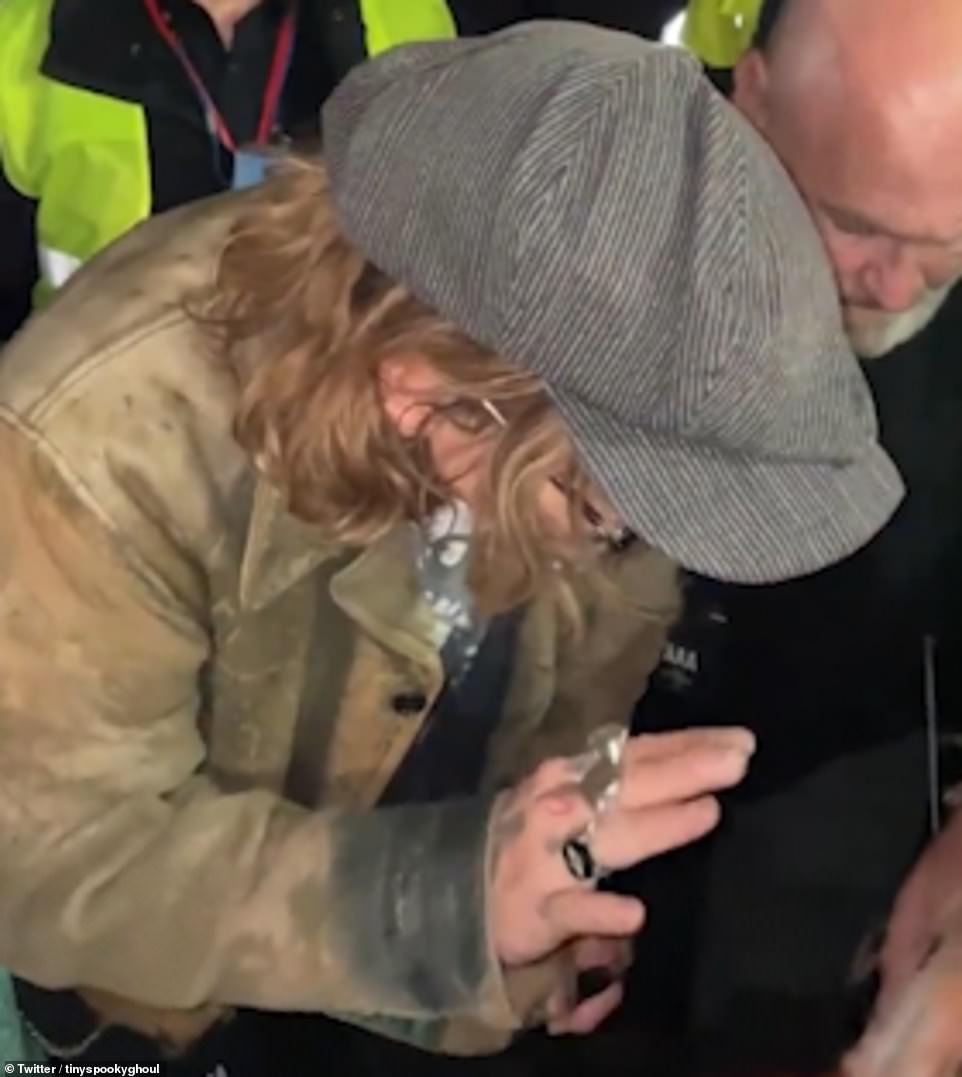 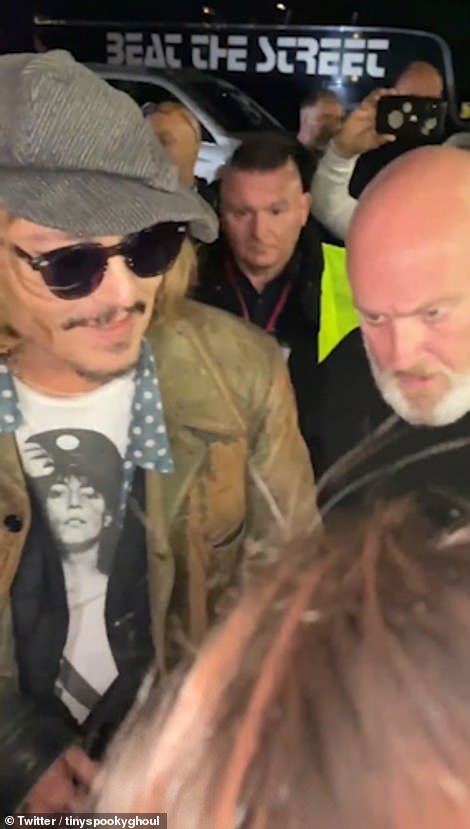 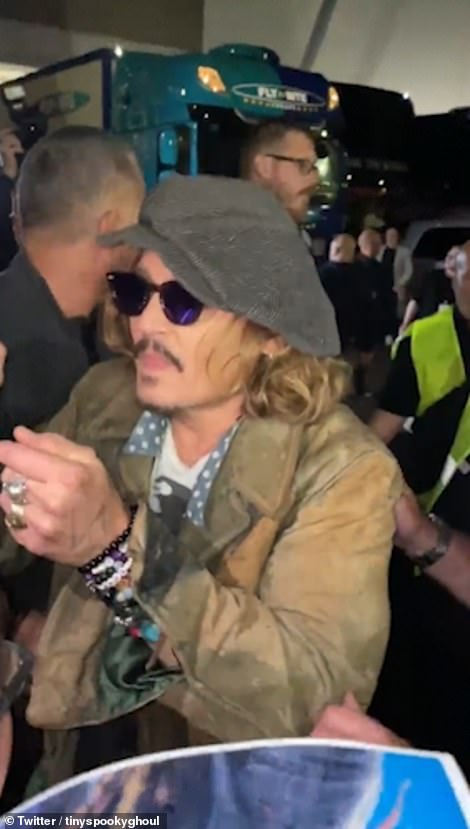 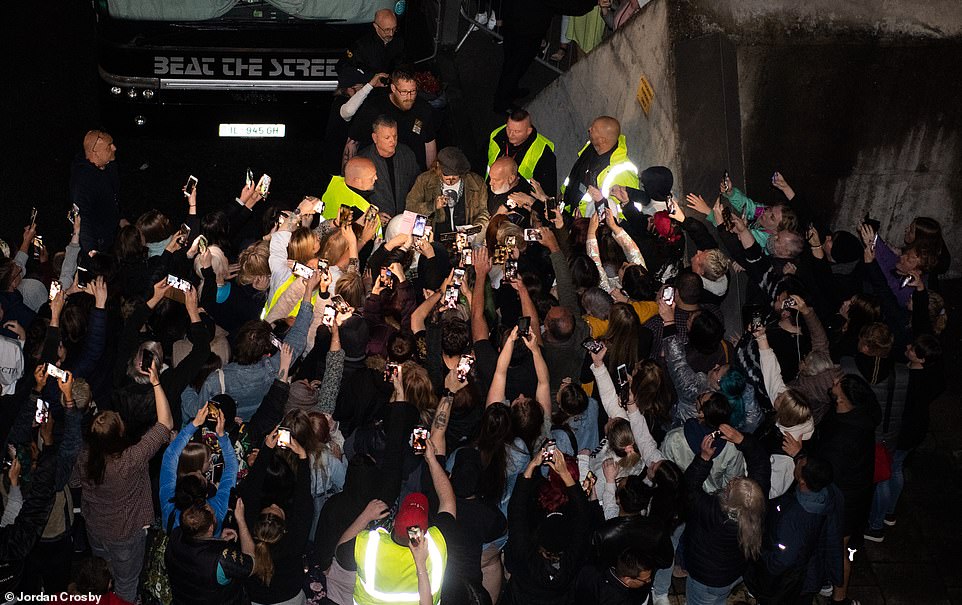 He remained tight-lipped when asked about his victory in the defamation trial, refusing to answer any questions about the verdict as he was mobbed by a crowd of adoring fans 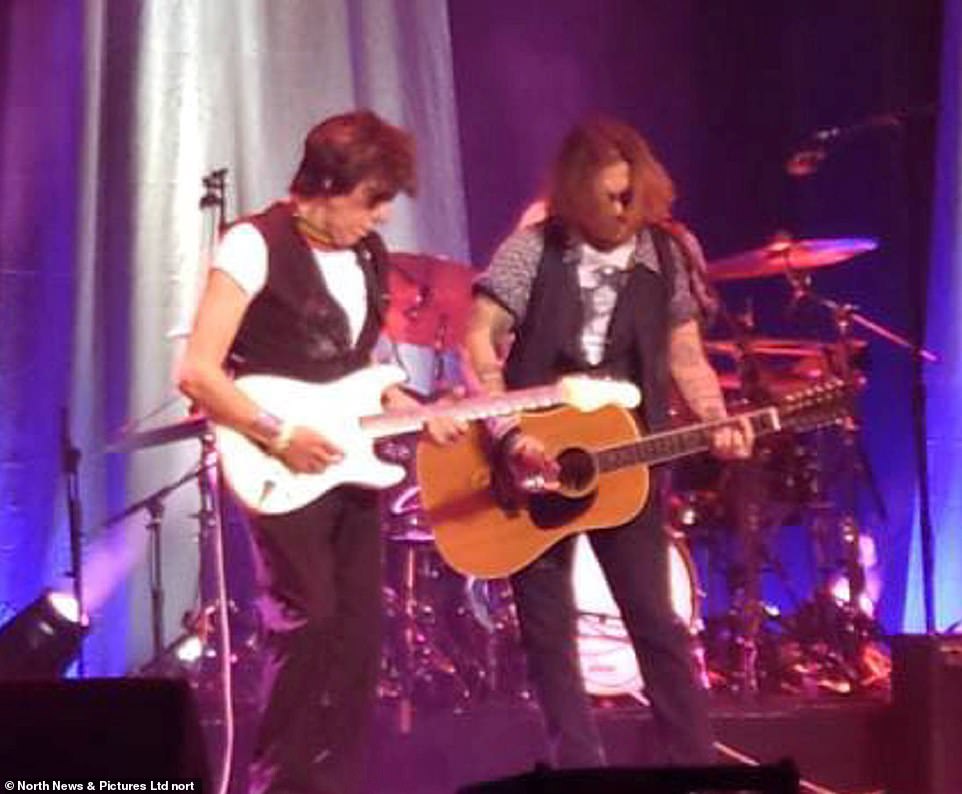 ‘What a result!’: Johnny Depp was cheered on by Jeff Beck and fans in Gateshead on Thursday as he played his first gig since his $15million lawsuit win over Amber Heard 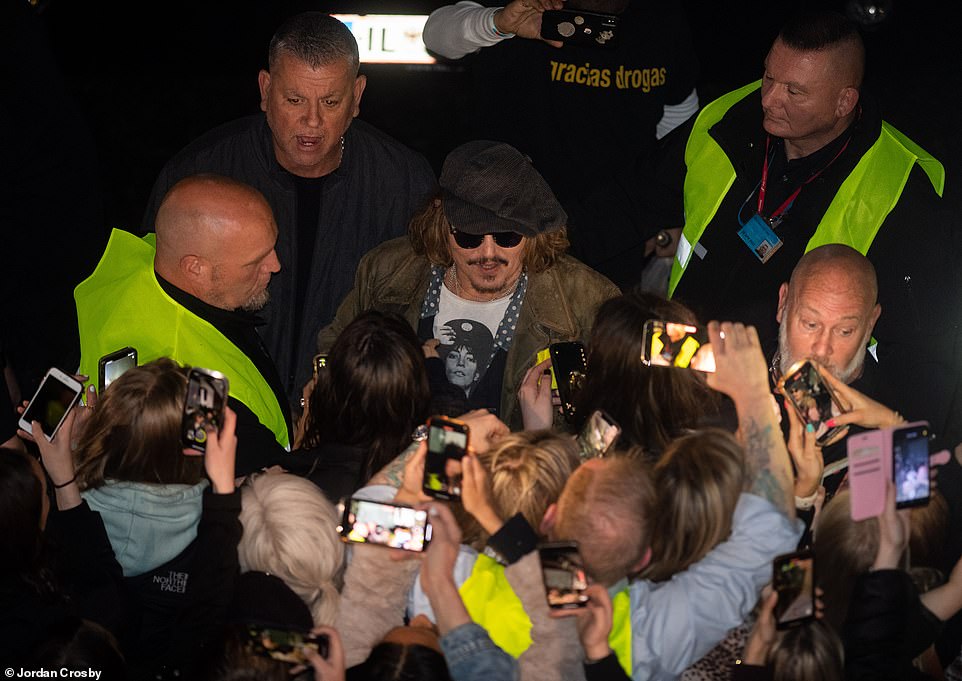 Team Johnny! The singer was mobbed by fans after the gig as roughly 200 people turned out to show their support 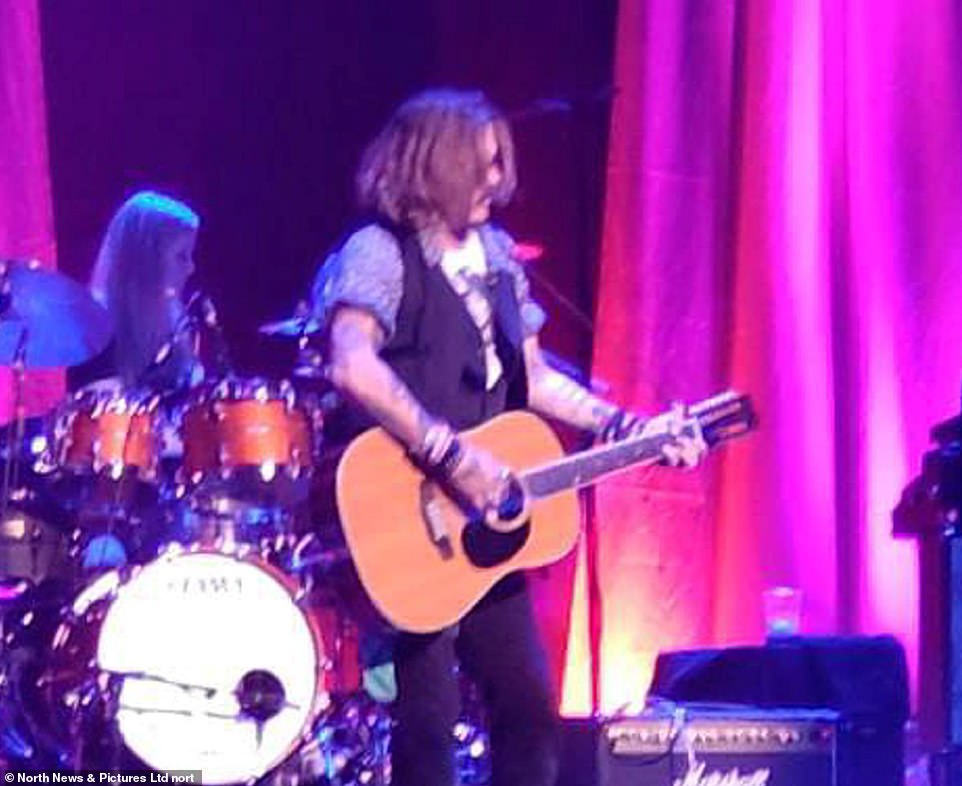 Loving life: The actor, 58, has been in England joining singer Jeff Beck on his tour and made an appearance during his friend’s gig in Gateshead on Thursday night

It means Depp walks away from the case with $8.35million.

He chose not to hear the verdict in person, which was announced at the Fairfax County Circuit Courthouse in Fairfax, Virginia on Wednesday.

Instead he went out for drinks with Beck and fellow musician Sam Fender at The Bridge Tavern pub in Newcastle, before returning to the stage to support the English guitarist on tour the following day.