Johnny Depp’s victory tour of the UK continues as he is pictured leaving a Manchester hotel with musician and friend Jeff Beck.

The 58-year-old actor has been to the UK to join Beck, 77, on his tour and was previously featured at his friend’s performance at the Sage Gateshead in the north of England on Thursday and was in Glasgow last night.

Depp was pictured leaving a Manchester hotel for a performance at the O2 Apollo tonight.

He stopped to sign autographs and pose for photos with gushing fans eager to show their support for the Pirates of the Caribbean actor.

Last night in Scotland, fans treated him like a long-lost Beatle as he sang and played rhythm guitar as he worked his way through a number of hits, including Marvin Gaye’s What’s Going On and The Beatles hit Paperback Writer.

But Depp’s set at the Royal Concert Hall was repeatedly interrupted by fans wanting to show their support.

Johnny Depp watched him leave a hotel in Manchester, signing autographs and posing for selfies 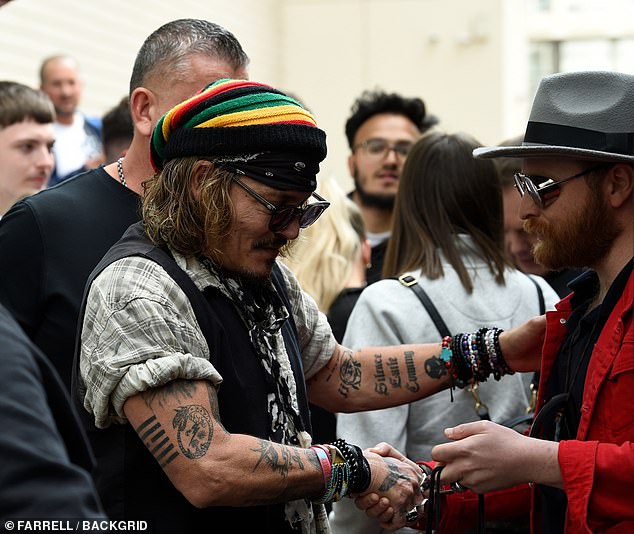 Pictured: Johnny Depp shakes hands with a fan outside a Manchester hotel today 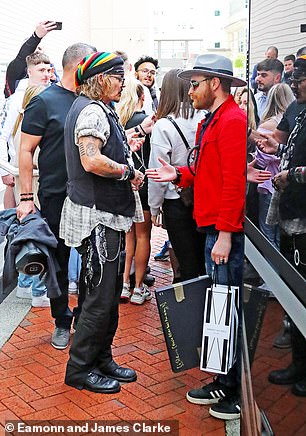 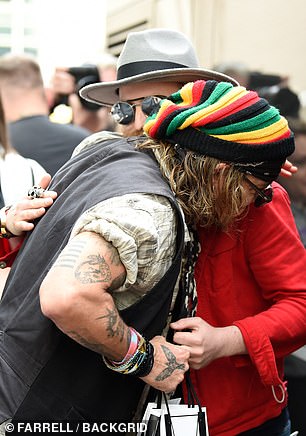 They chanted “Johnny, Johnny,” “Innocent, Innocent” and “Johnny Depp, Johnny Depp,” while some Beck fans begged them to shut up.

It came after Depp sued his ex-wife Heard, 36, for $50 million over a 2018 piece she wrote that claimed she was a victim of domestic violence.

Depp won this week’s jury trial in Virginia in the US, meaning he will receive millions of dollars in damages from Heard.

His win has been well received by his fans, and despite Beck being heralded as the main attraction on his UK tour, the crowd came alive when Depp took the stage.

Beck’s live performance, which followed appearances in the UK, including shows in London and Sheffield, coincides with news that he plans to release a new album next month.

In Glasgow, Beck, who has collaborated with Depp on the new material, said: ‘When I first asked Johnny to do the blues with me, he told me to fuck off. Everything is the blues. We have a new album that will hopefully be released in July.” 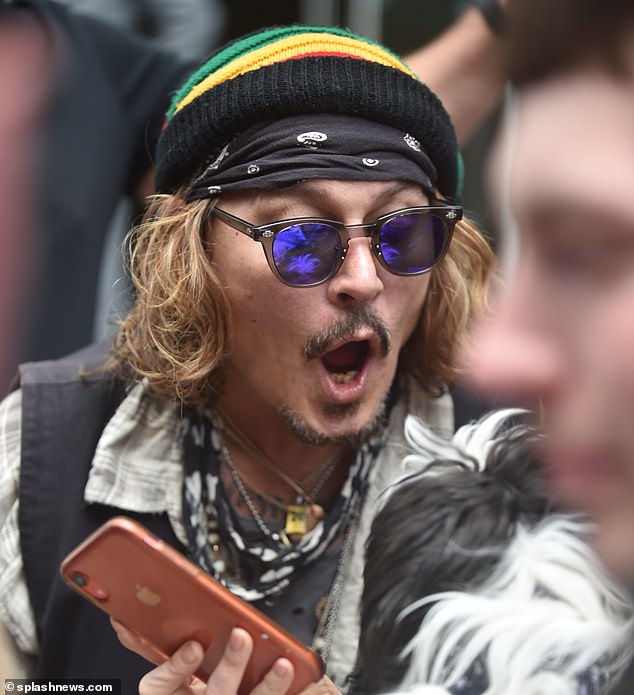 Pictured: Johnny Depp says hello to a fan’s dog outside a Manchester hotel 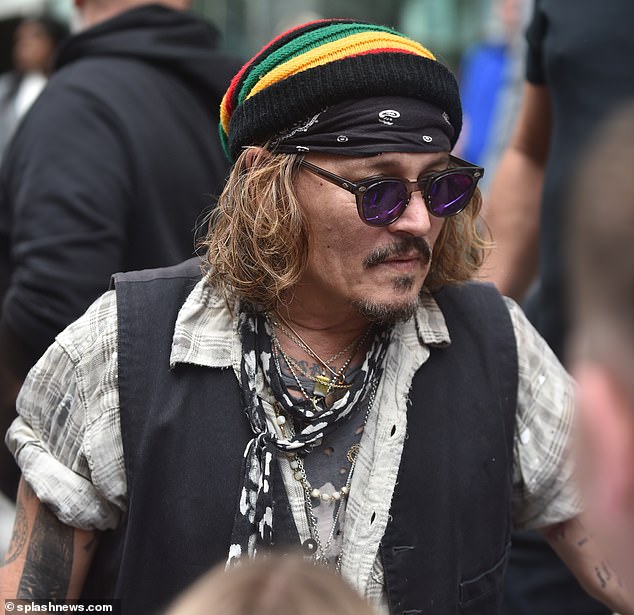 While there is no official release date or title for the album, Beck has admitted that he sees Depp as both a friend and a travel buddy.

He said: ‘I’m going to take this opportunity to tell you that I met this man five years ago and we haven’t stopped laughing since. We even made an album.

‘I don’t know how it happened. It comes out in July.”

In addition to the album, Depp has an emerging role as King Louis XV in his first feature film in nearly three years.

Jeanne du Barry tells the story of Jeanne Bécu who was born in 1743 as the illegitimate daughter of an impoverished seamstress and then ascended through the court of Louis XV to become his last official mistress. 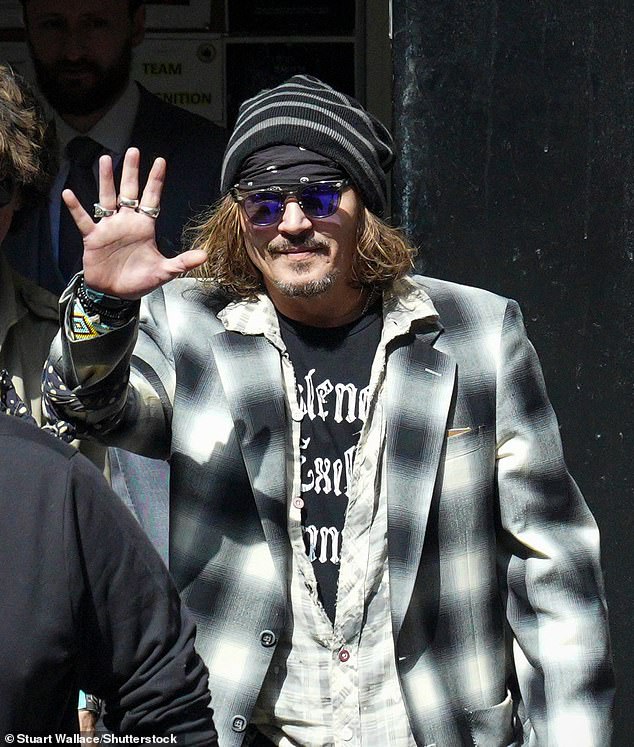 The 58-year-old actor has been to the UK to join 77-year-old Beck on his tour and appeared on Thursday night during his friend’s performance at Sage Gateshead in the north of England.

In a statement following his defamation lawsuit against Heard, he praised the start of a “new chapter.”

Depp heard he will run off with millions of dollars after winning his US defamation case against his ex-wife Amber Heard on Wednesday.

The actor seemed excited when he came out to greet well-wishers after the concert in Gateshead the following day, sign autographs and pose for photos with a crowd of about 200 people who had waited at the stage door to watch him leave.

After fans congratulated him on winning the suit, the Pirates of the Caribbean star laughed and said, “Thank you, I’m still a bit in shock.”

Depp also joked about the finger he said was chopped off by Amber Heard during a fight they had in Australia, an ordeal he spoke of in court.

As he signed, he smiled, leaned forward, pointed to a little boy’s fingers and said, “You have five, I have four and seven eighths. Angry.’

During the trial he said: ‘She [Amber Heard] threw a bottle of vodka and cut my finger. The tip of my finger. A good piece.’

“I miss it,” he added with a short smile.

Depp is expected to join him for the remainder of the tour – to Birmingham, Manchester and York – which ends on Tuesday.

Tickets to the shows are suddenly scarce and crowds of hundreds of fans have consistently gathered outside the hotels where the actor has stayed since he was first spotted in Sheffield last week.

There were about 250 fans outside the Hilton in Gateshead on Thursday night hoping to catch a glimpse of Depp and he spent the hours waiting for the verdict in a pub in nearby Newcastle, drinking Guinness and eating fish, chips and mushy peas – until amazed delight of gamblers and staff.

He went back to the Hilton to watch the court proceedings on Zoom when the verdict fell on June 1.

Sources close to the star say he’s ‘still regrouping’ after the stunning ruling, which requires his ex-wife to pay him around £8 million, which she doesn’t have.

“This is a huge moment for Johnny and he’s still trying to take it all in,” said a friend.

“Aquaman” actor Amber Heard is appealing the jury’s decision that she defamed ex-husband Depp when she claimed to be a survivor of sexual assault, her lawyer said Thursday.