The daughter of Prince Andrew and Sarah Ferguson, 33, was all smiles as she joined her husband Edoardo Mapelli Mozzi, 38, at the exclusive venue in London yesterday after enjoying a night on the town.

Showing off her sartorial prowess, the mother-of-one wrapped up in a trendy black dress with a chic velvet jacket.

Keeping a natural look, Beatrice opted for minimal make-up with just a light layer of foundation and lick of mascara to emphasise her good looks.

Yesterday, Edoardo gushed over his wife in an Instagram post after attending the Queen’s Jubilee celebrations at St Paul’s.

Princess Beatrice, 33, sported a little sleek black dress and trendy jacket as she headed out of Maison Estelle members’ club in Mayfair last night alongside her husband Edoardo Mapelli Mozzi 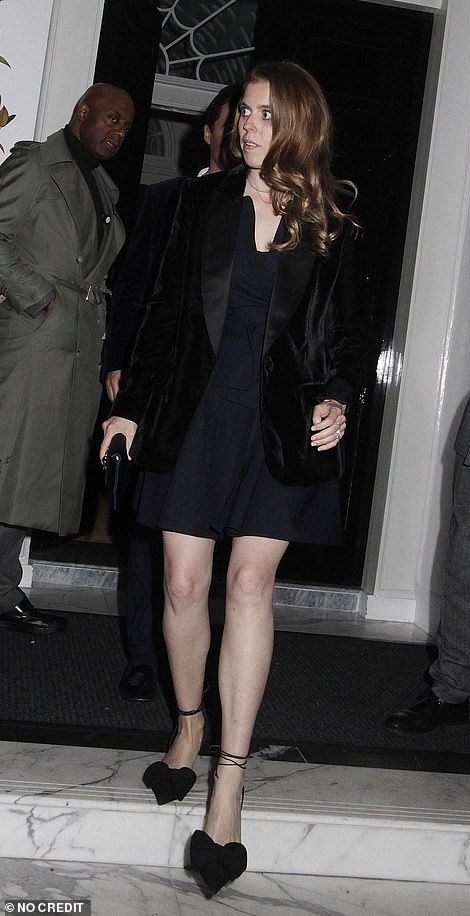 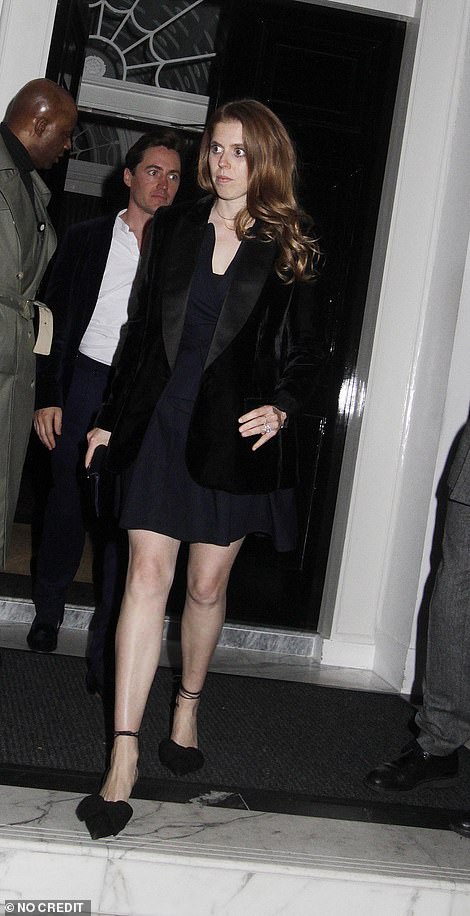 The daughter of Prince Andrew and Sarah Ferguson , 33, was all smiles as she joined her husband Edoardo Mapelli Mozzi, 38, at the exclusive venue in London yesterday after enjoying a night on the town 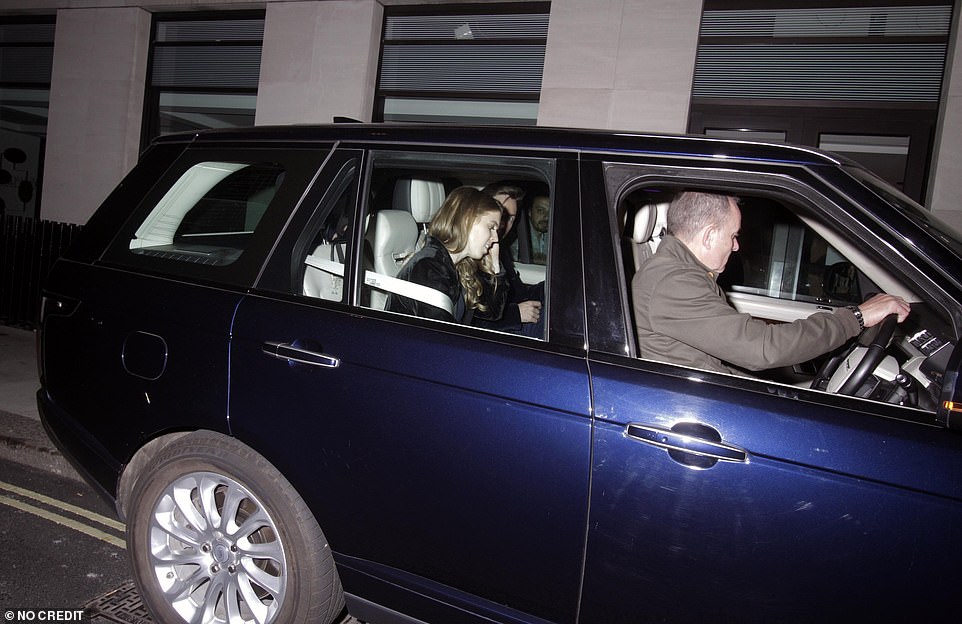 Later, the royal couple hopped into a waiting car as they left the club after their date night in central London

Private member’s club Maison Estelle is the newest hotspot from hospitality group the Ennismore, and attendees since it opened have included Angelina Jolie and Idris Elba.

It was founded by the power couple Sharan Pasricha, who bought Gleneagles for £200 million in 2015, and his heiress wife Eiesha Mittal,  the daughter of billionaire Sunil Mittal.

The club is to be housed in a Grade I-listed building, designed by Sir Robert Taylor in 1772, on Grafton Street.

The venue, which is the brand’s first private members’ club – offers restaurants, bars, lounges, retail, and a nightclub space with a curated programme of events. 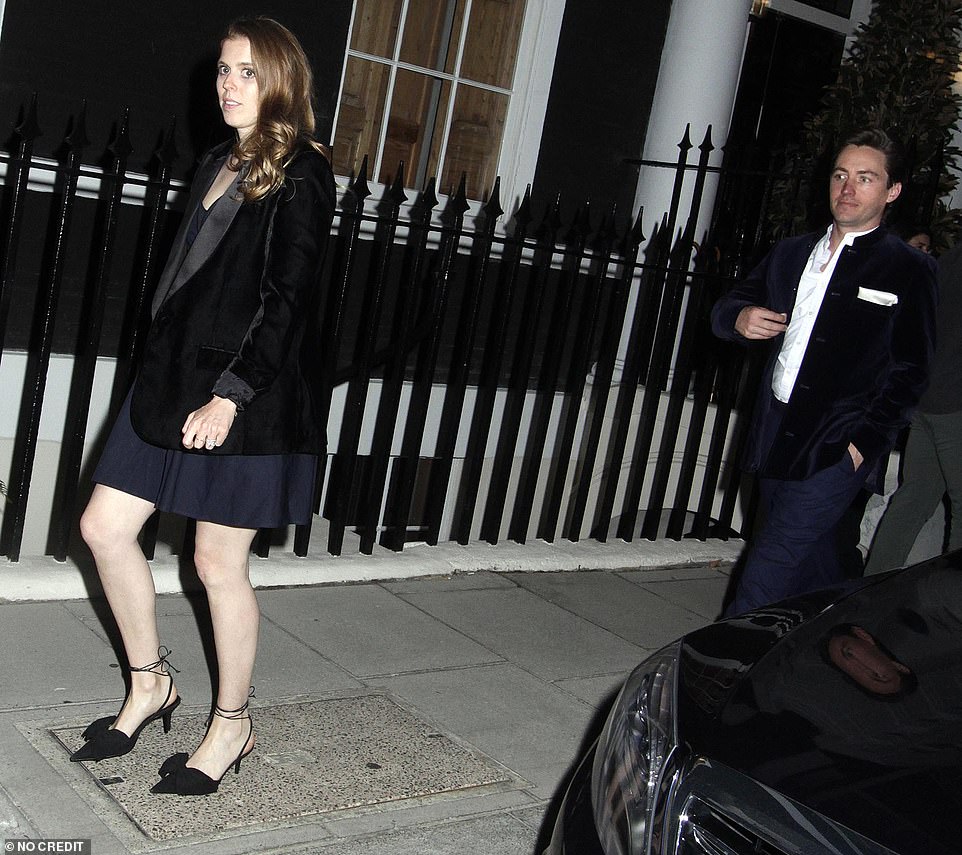 Keeping a natural look, Beatrice opted for minimal make-up with just a light layer of foundation and lick of mascara to emphasise her good looks

Meanwhile Princess Beatrice also opted for a pair of black kitten heels for the occasion, which featured a trendy bow detail on the toe (pictured left and right) 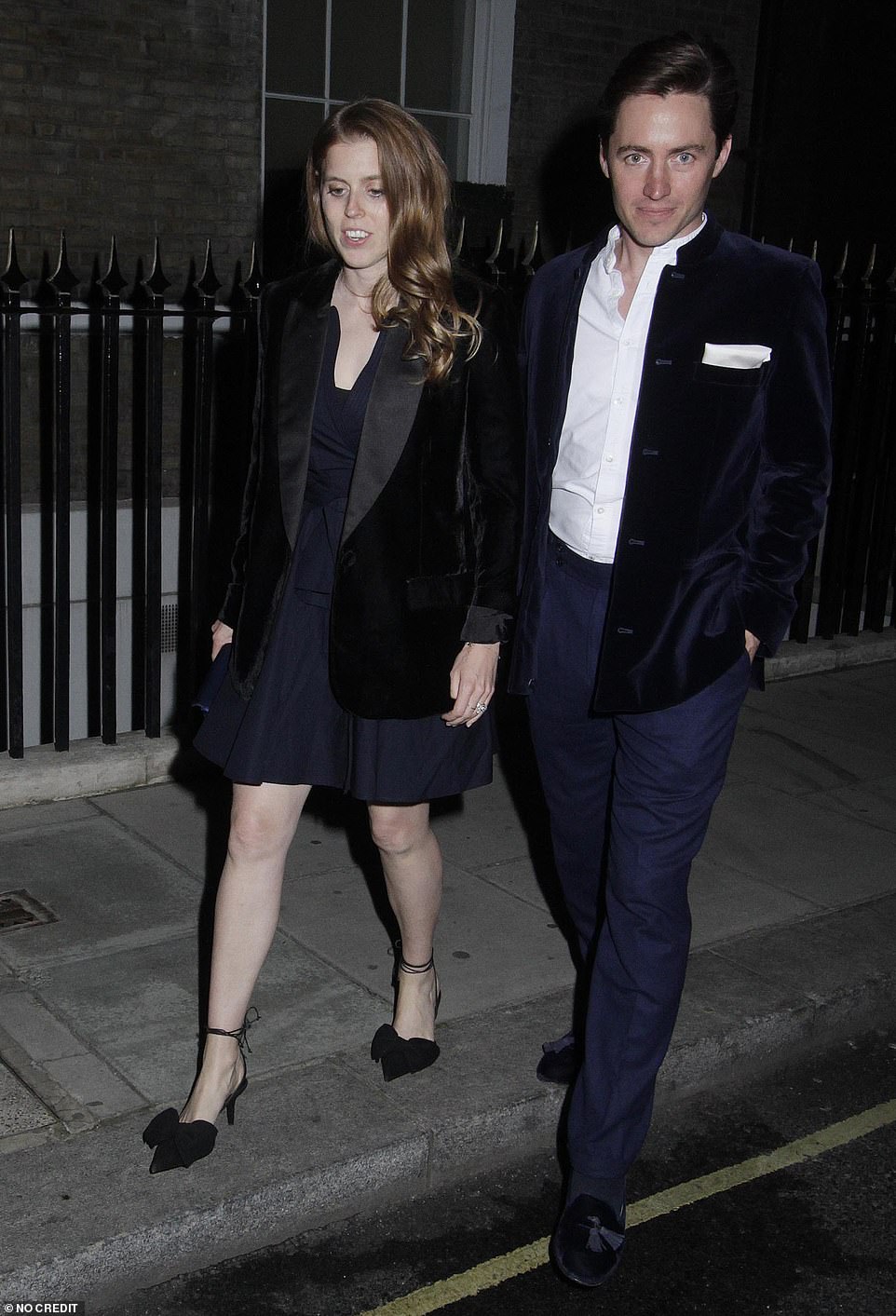 Showing off her sartorial prowess, the mother-of-one wrapped up in a trendy black dress with a chic velvet jacket 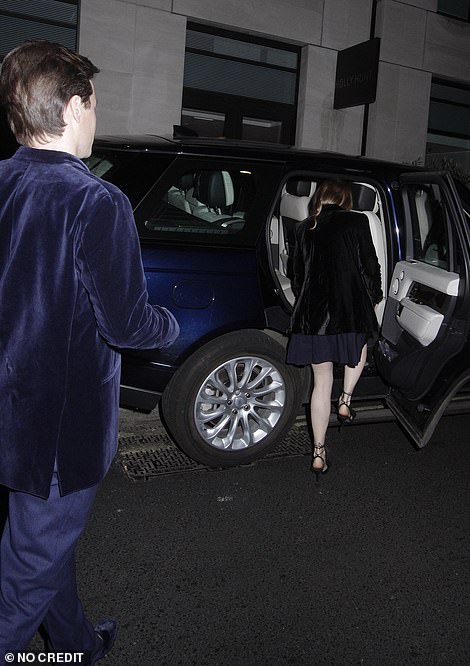 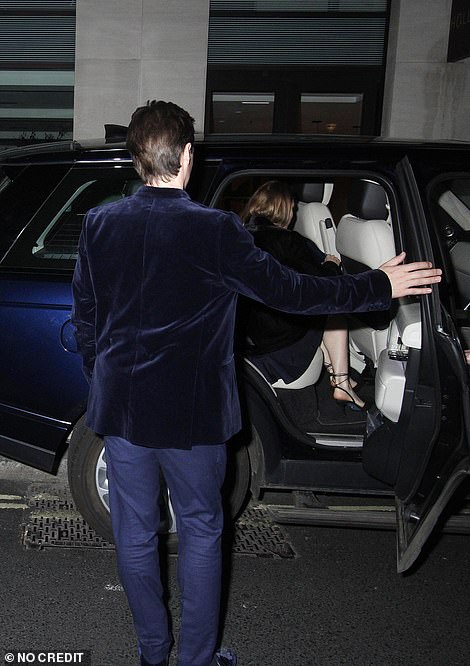 After the date night, Princess Beatrice nipped into the waiting car ahead of Edoardo, while he ensure the door was closed behind her 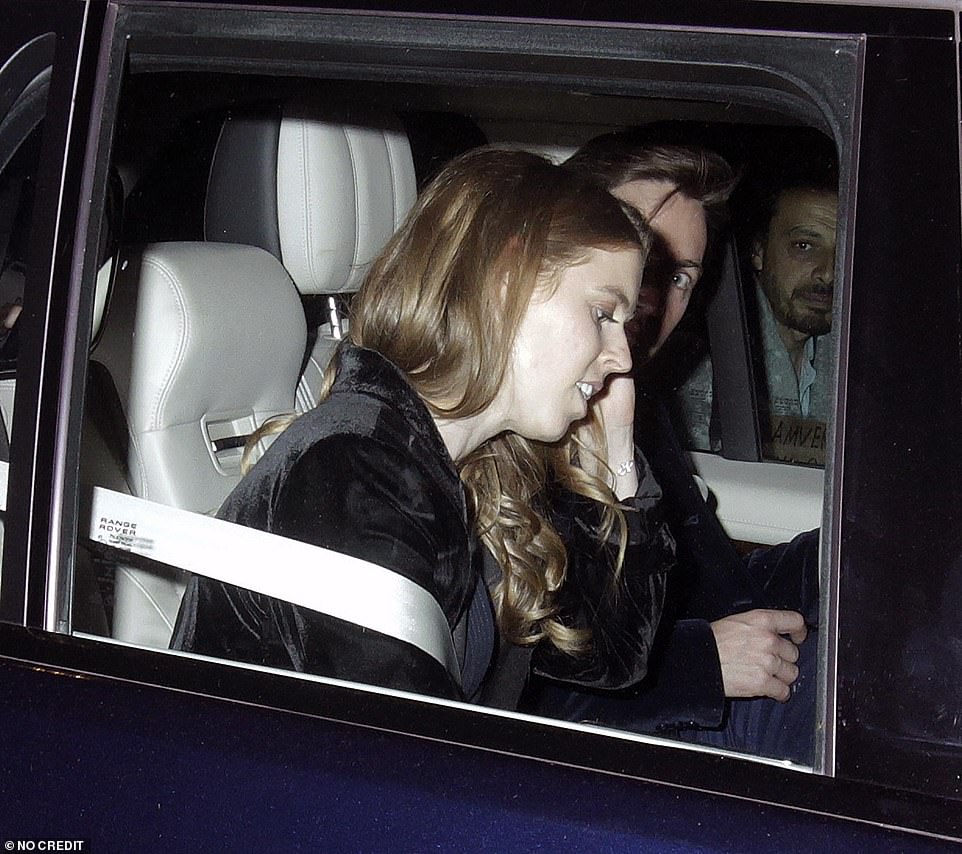 The couple appeared relaxed following their date night in Mayfair, which has come in the middle of a busy week celebrating the Queen’s Jubilee

There is a wine cellar bar in the basement, while on the third floor there is also a library.

The date night came after a busy few days for the couple, who yesterday arrived at St Paul’s Cathedral alongside   Princess Eugenie, 31, as well as her husband Jack Brooksbank to attend a Thanksgiving Service in honour of the Queen.

Edo, who married in an intimate private ceremony at the Royal Lodge in Windsor in 2020 and welcomed their first baby last autumn, has made regular public appearances this spring alongside Beatrice. 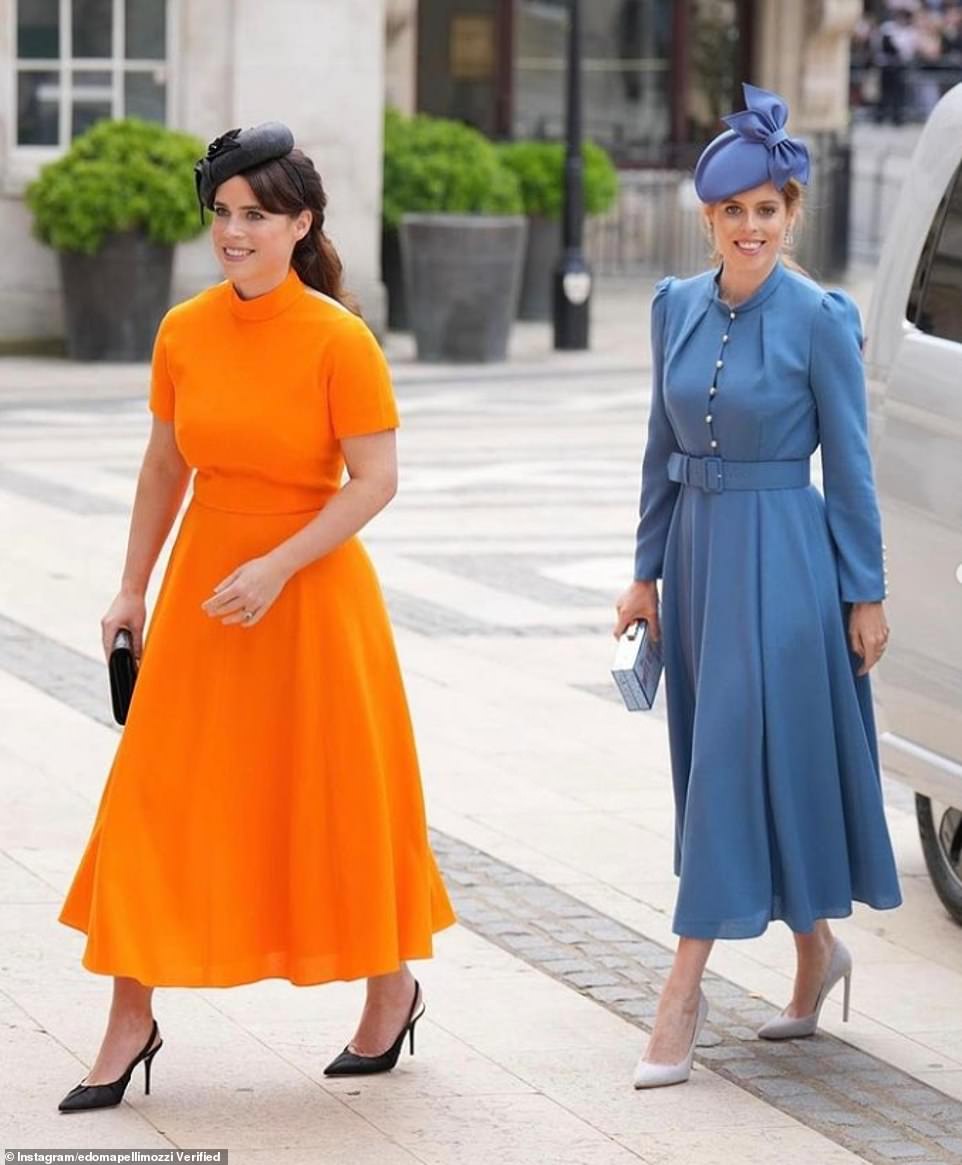 Eugenie, 32, looked stunning in a £1,503 orange dress from Emilia Wickstead as she walked to the Cathedral with Jack.

Meanwhile, her older sister Beatrice dazzled in a blue dress by Beulah as she was accompanied by Edo.

However, it was announced the Queen wouldn’t attend the service after experiencing some ‘discomfort’ during the first day of celebrations. 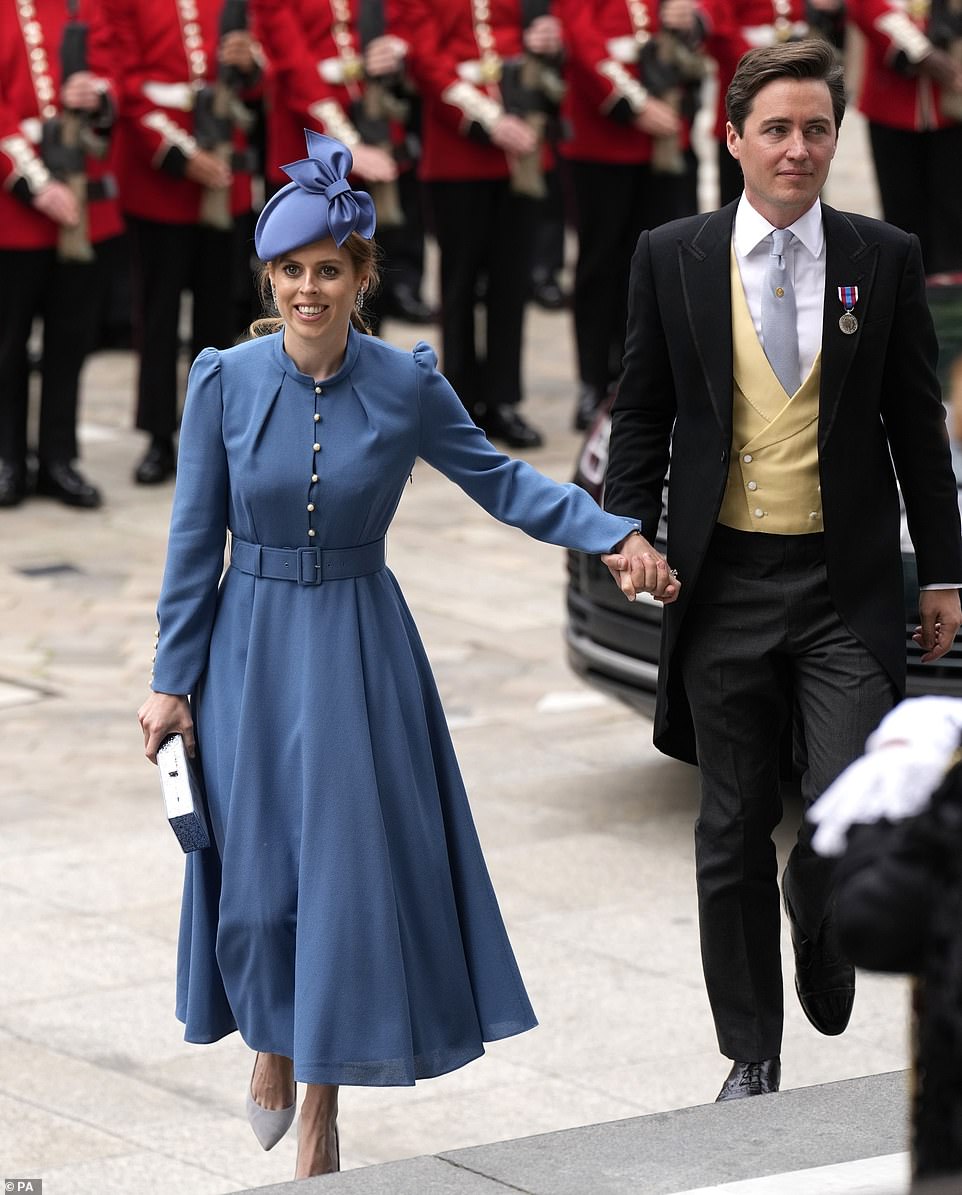 The Duke of York’s daughter looked elegant as she arrived at St Paul’s Cathedral alongside Edo, 38, to attend a Thanksgiving Service in honour of the Queen 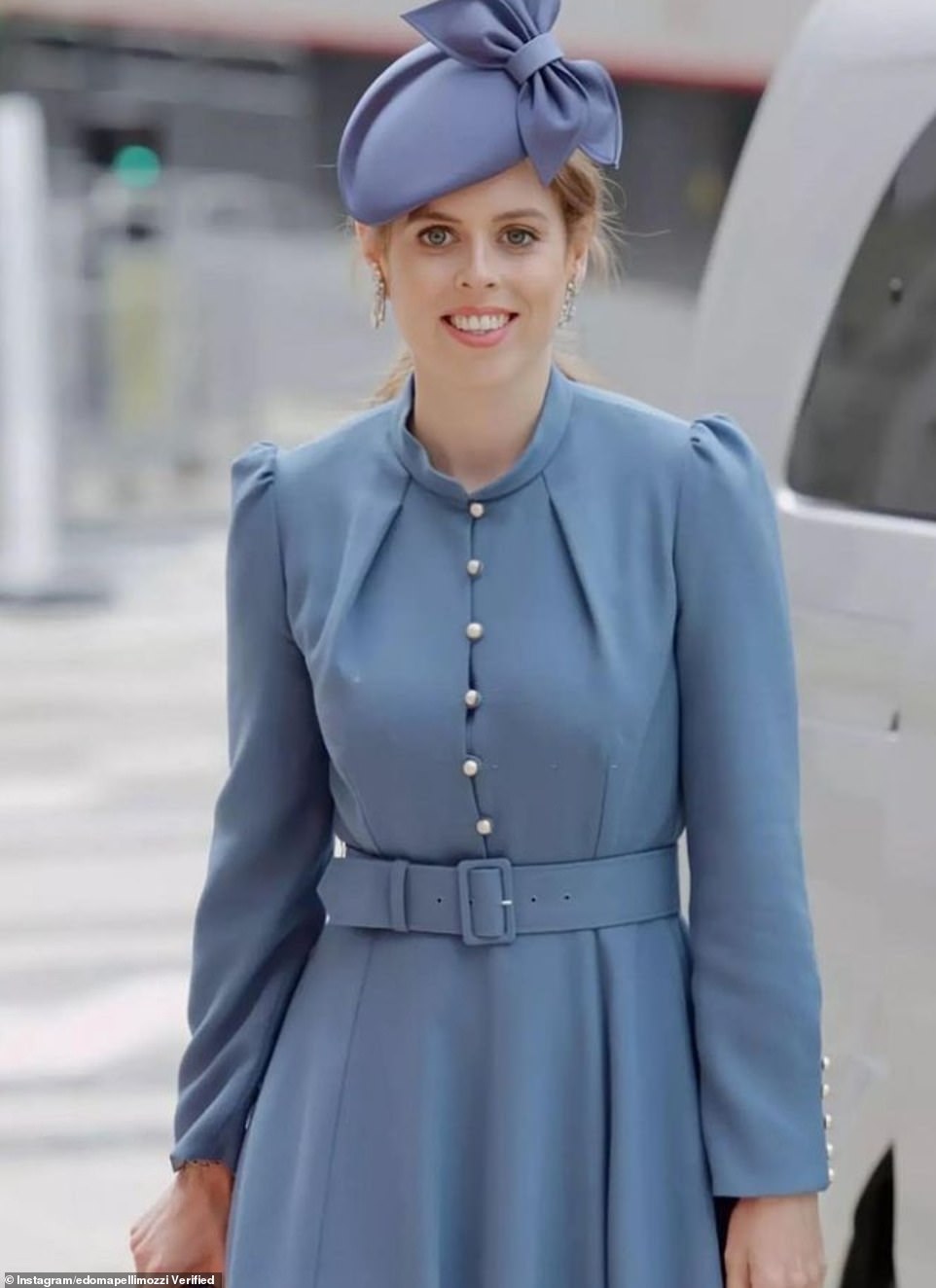 Beatrice, 33, dazzled in a blue dress by Beulah as she was accompanied by her husband of two years Edo Mapelli Mozzi, 38.

The Duke has been absent from public life since being cast out of the working monarchy and no longer uses his HRH style after Virginia Giuffre, who was trafficked by Andrew’s friend Jeffrey Epstein, accused him of sexually assaulting her when she was 17. The Duke has always strenuously denied the claims.

The Duke of York and Sarah Ferguson’s daughters looked relaxed as they made their way to the Cathedral.

The two mothers, who had left their respective children, August, 16 months, and Sienna, eight-months, at home, looked a picture of unity.

Meanwhile, Jack and Edo looked in their element in finely tailored jackets and morning coats.

Jack, who was wearing glasses, was wearing a sunny yellow tie, while his brother-in-law donned a baby blue one that matched Beatrice’s dress.

It comes after royal authors said Princess Beatrice is stepping into the limelight to ‘help her grandmother the Queen’ following Prince Andrew’s downfall and is ‘much more confident’ after becoming a wife and a mother.

Earlier this week, she attended a garden party at Buckingham Palace as one of a host of royals who were standing in for the Queen, 96, who has bowed out of this year’s garden parties amid ongoing mobility issues.

She has also visited the Chelsea Flower Show alongside Edo and the Royal Windsor Horse Show for a Platinum Jubilee celebration this month, while in April she joined members of the Swedish royal family in Stockholm to attend the World Dyslexia Assembly Sweden. 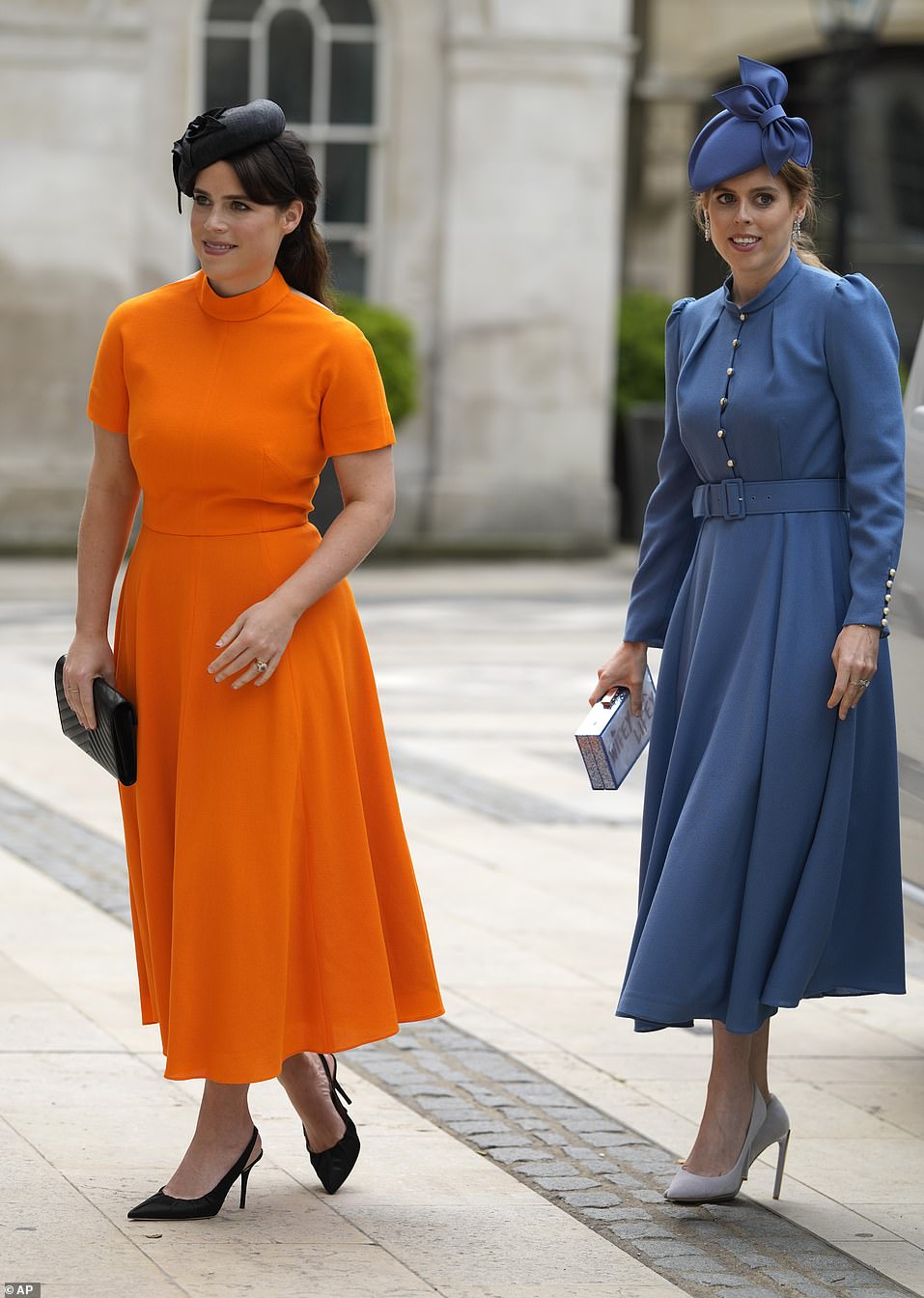 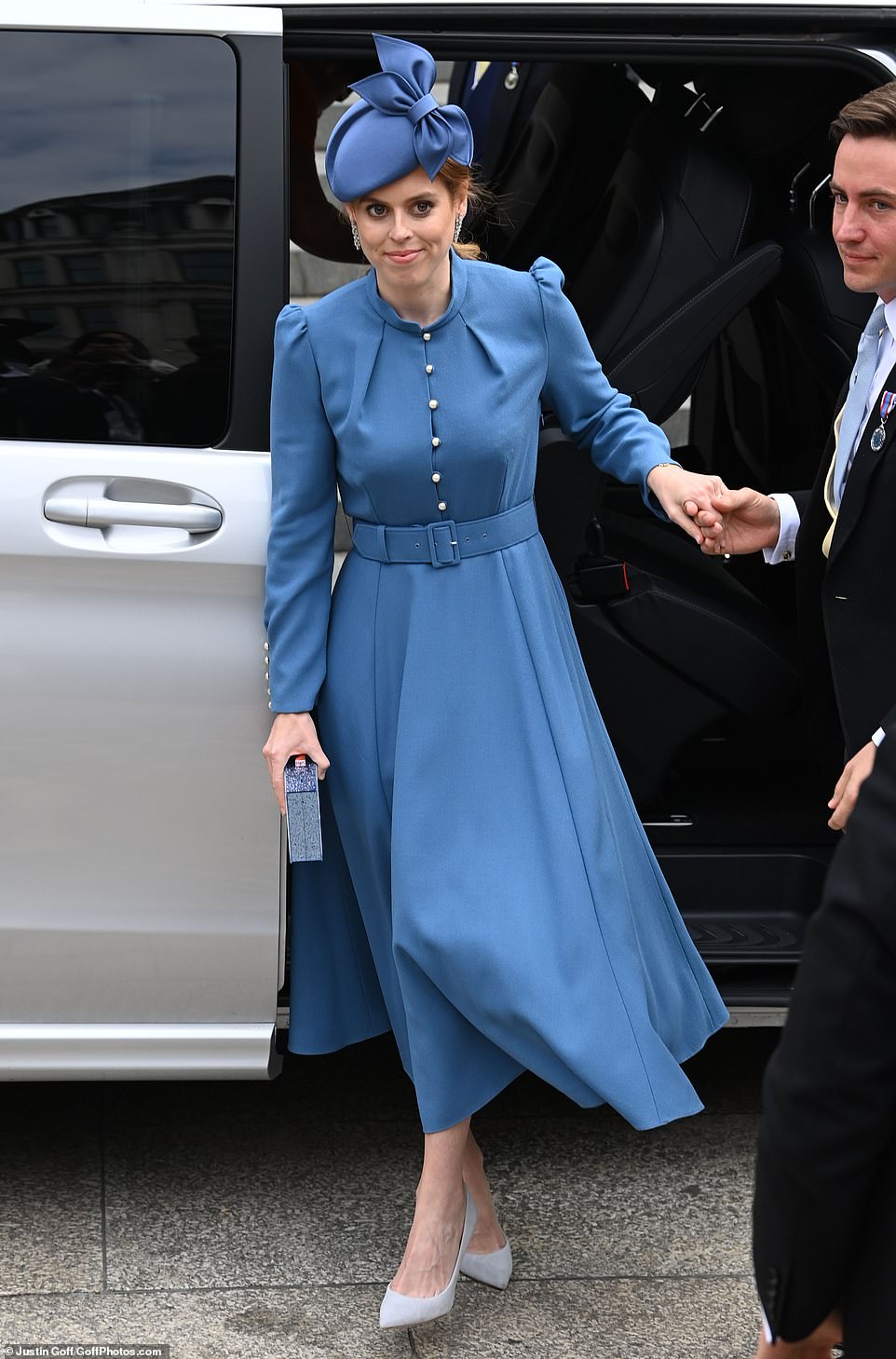 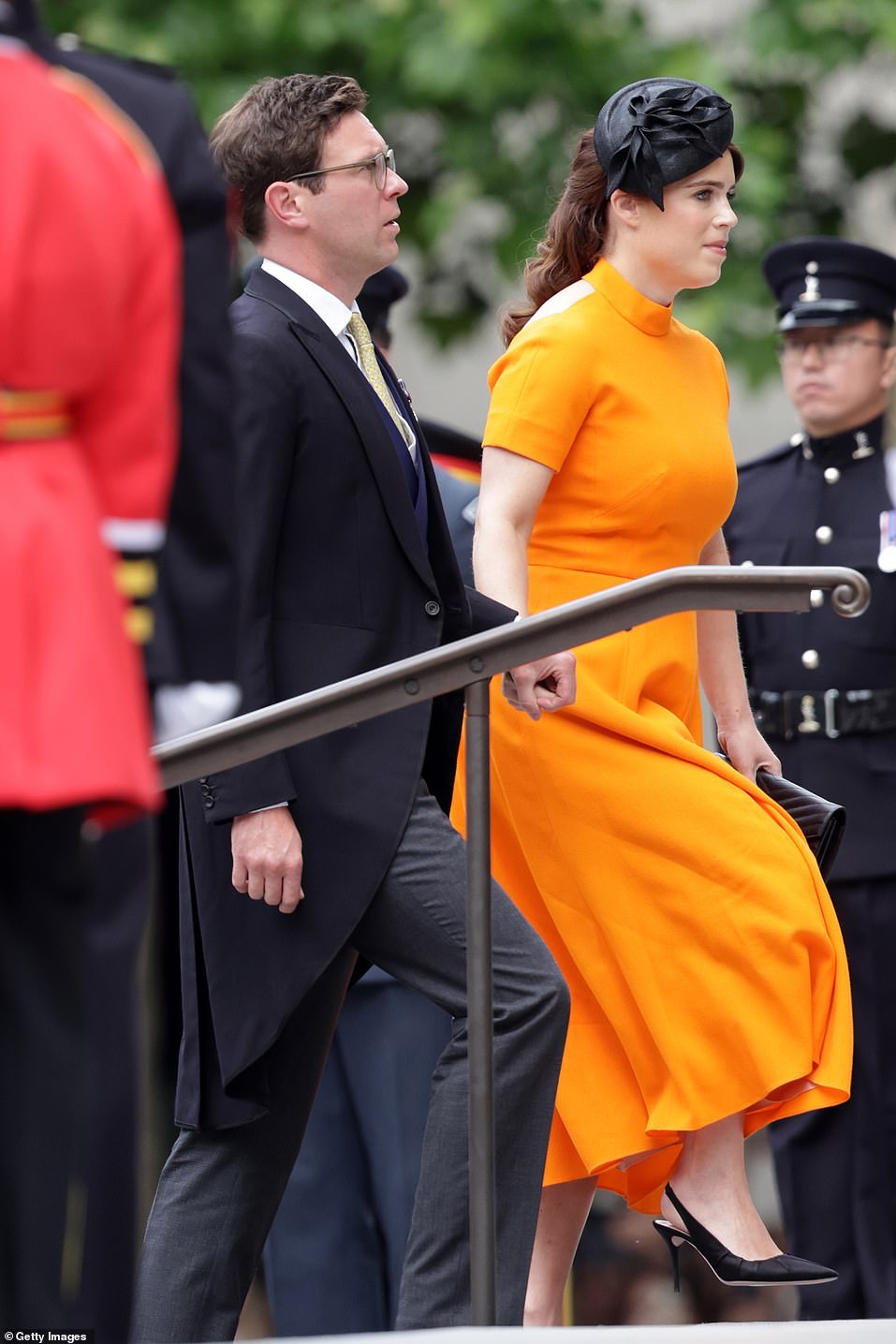 Eugenie stepped on the stairs of the cathedrals in a pair of stylish black slip -ons heels, which matched the pretty hat she chose to wear 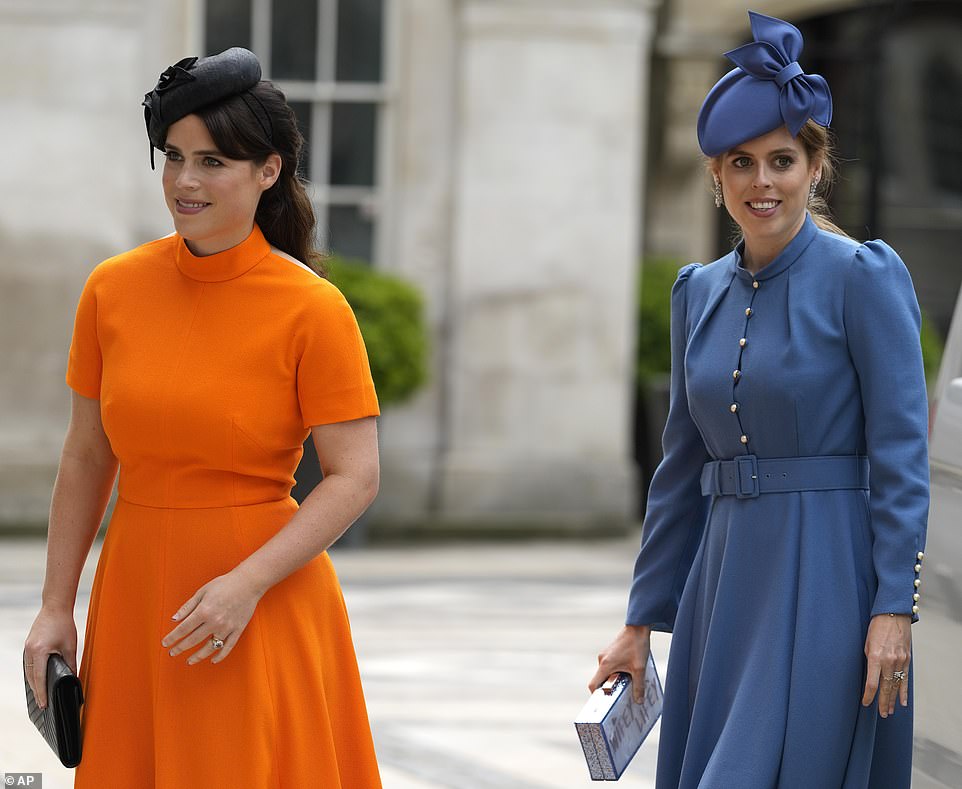 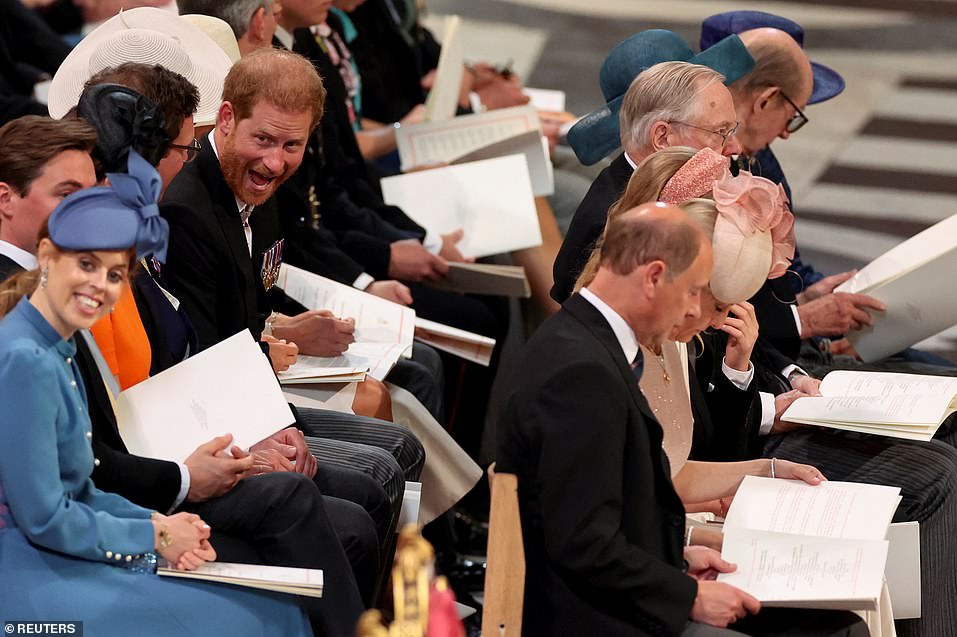 Eugenie and Beatrice, who looked very elegant, were all smiles as they arrived for the ceremony at St Paul’s with their respective husbands

Yet the mother-of-one, who welcomed her daughter Sienna in September 2021, has previously been seen as rather private, having had a surprise secret wedding on 17 July 2020, and reportedly held a ‘private christening’ for her daughter earlier this month.

Editor-in-chief of Majesty Magazine Ingrid Seward told FEMAIL Beatrice ‘wants to help her grandmother as much as she can’ after Prince Andrew was cast out of the monarchy over his civil sexual assault case.

Royal author Angela Levin added that the Queen’s granddaughter is ‘reliable’ and ‘trusted’ by the Firm and seen as ‘much more confident’ since welcoming her daughter and marrying Edo.

Speaking to FEMAIL, Angela said: ‘I think [Beatrice] is a trusted member of the royal family and seen as somebody who is sound. 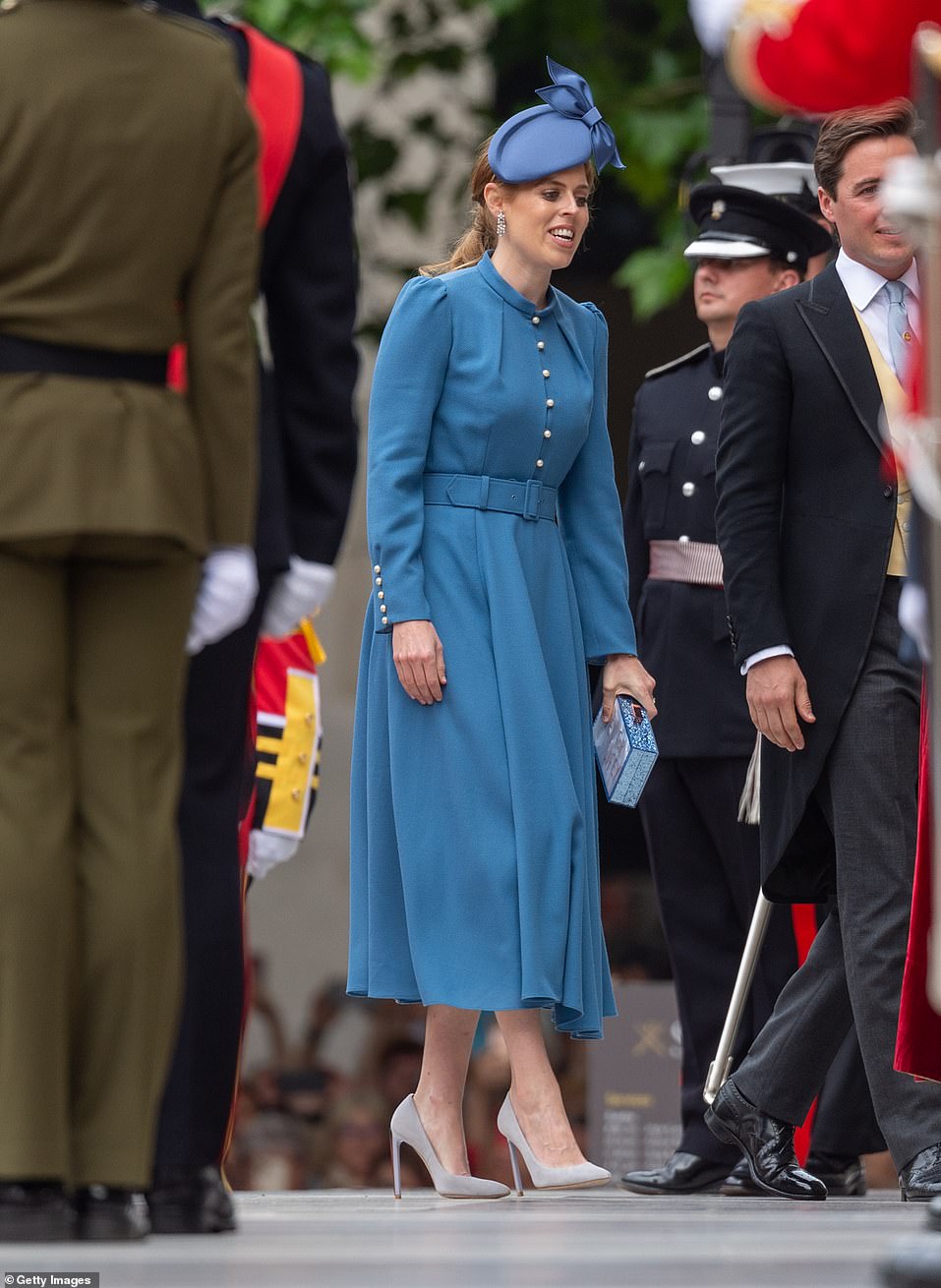 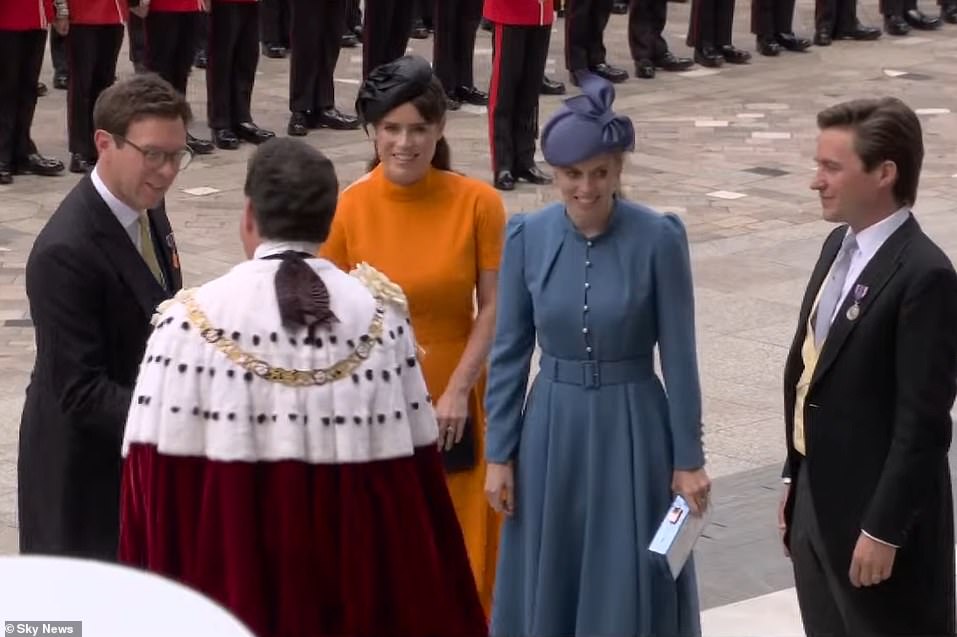 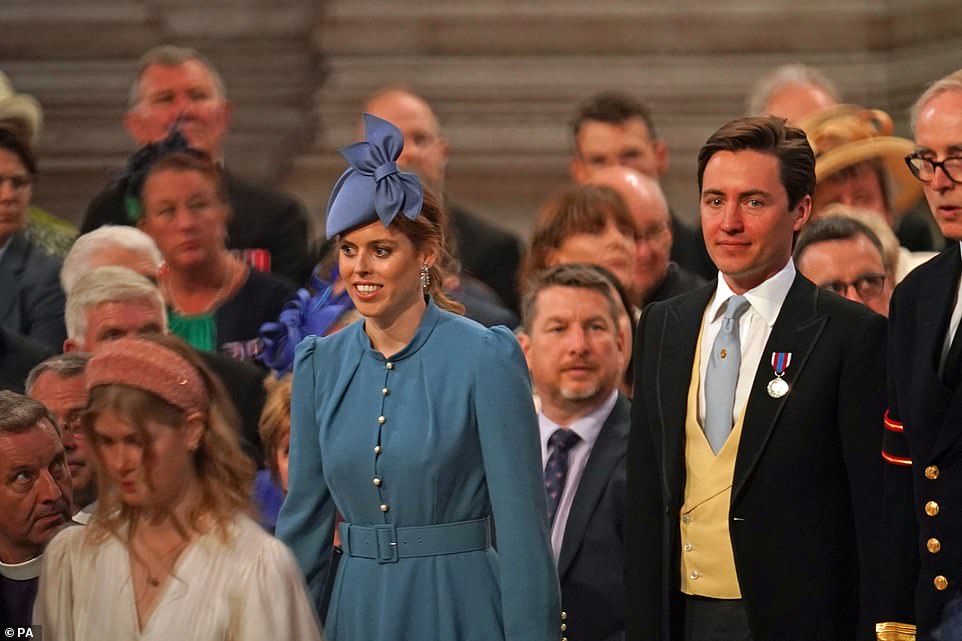 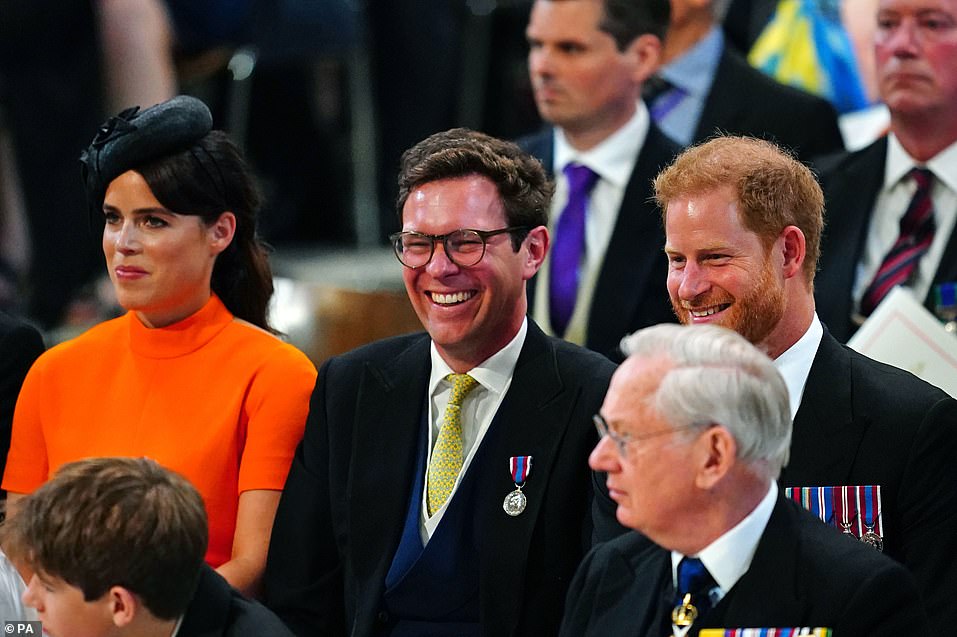 Eugenie, Jack and Harry seemed to be in on the same joke as they were seen laughing together after sitting down in the cathedral

‘When her father was going to be interviewed by Emily [Maitlis for BBC Newsnight in 2019], she was the one who told him not to do it.

‘And now she is married and a mother, she is seen as much more confident,’ added the royal biographer, who said Beatrice has always been seen as ‘having good judgement’ and being ‘reliable’.

Royal biographer Ingrid said: ‘Princess Beatrice is a lovely person and I imagine she wants to help her grandmother as much as she can.

‘She has a baby but has a top Norland nanny to take over when necessary. So I think she enjoys doing royal events with her husband and has the ability and wherewithal to do them.’