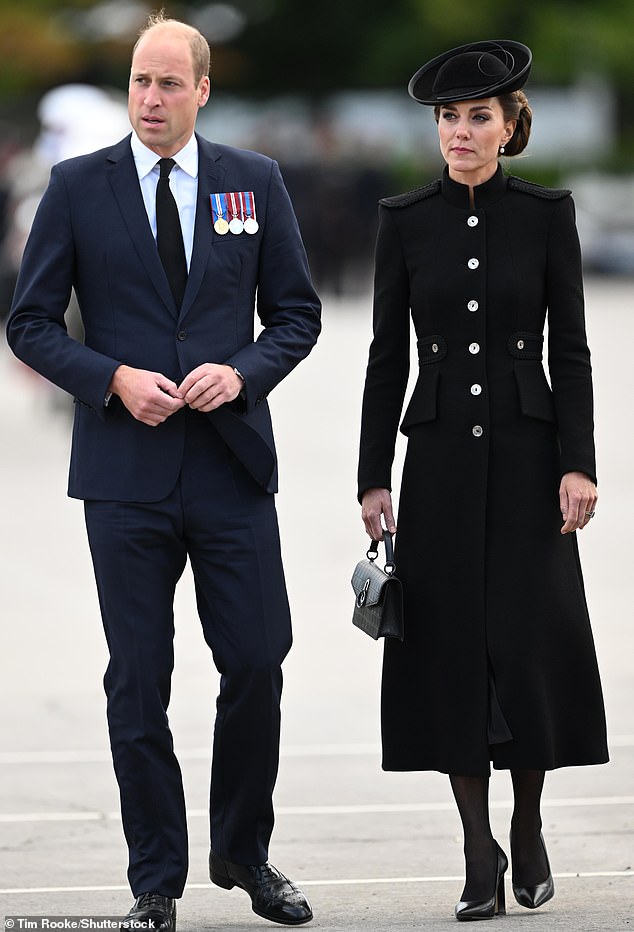 The Prince and Princess of Wales have arrived at Pirbright Army Training Center in Surrey to meet Commonwealth troops taking part in the Queen’s state funeral.

William and Kate are using the visit to speak to soldiers from Australia, Canada and New Zealand to take part in Monday’s historic event.

Rehearsals for the service took place earlier in the day and continued even after the royals arrived on the scene.

Today’s visit is Kate’s second visit to the center in less than a year, after wearing a helmet and posing in an army tank in photos she posted on Armed Forces Day.

Pirbright acts as a waiting area for service personnel outside London, where troops can train, eat and sleep before entering the capital to provide ‘ceremonial support’ to the funeral’.

The center houses 750 servicemen from Defense and Commonwealth Realm Defense Forces and has previously been used for soldiers involved in the funeral of the Duke of Edinburgh and Her Majesty’s platinum jubilee.

The funeral service will be attended by 28 Australian troops, 64 Canadian and 25 from New Zealand. 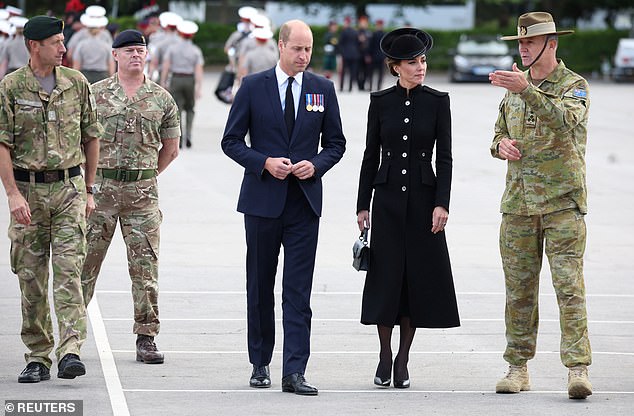 William and Kate use the visit to speak with soldiers from Australia, Canada and New Zealand, among others, to take part in Monday’s historic event 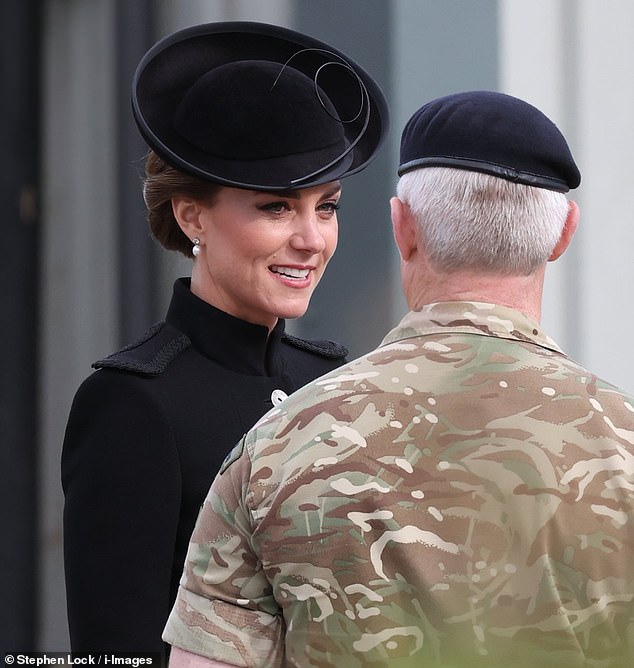 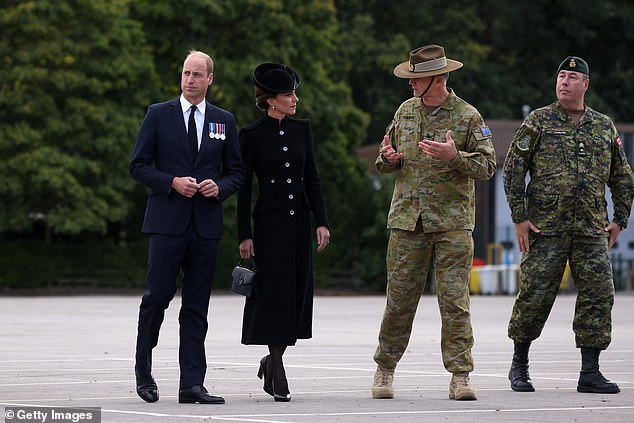 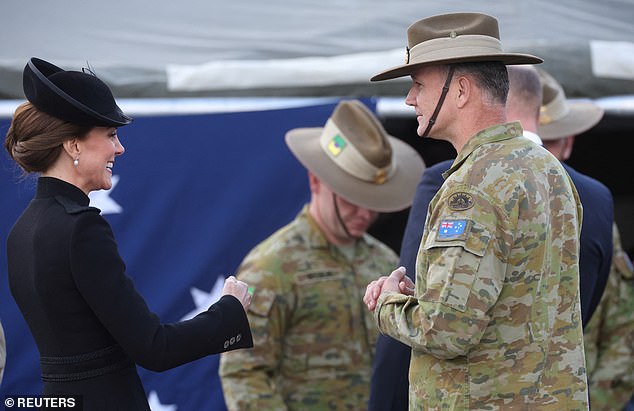 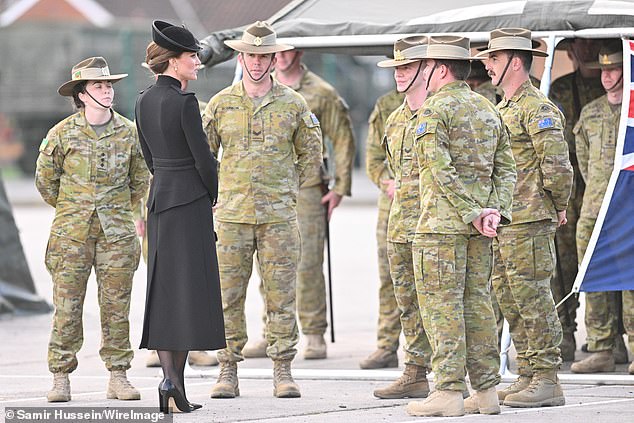 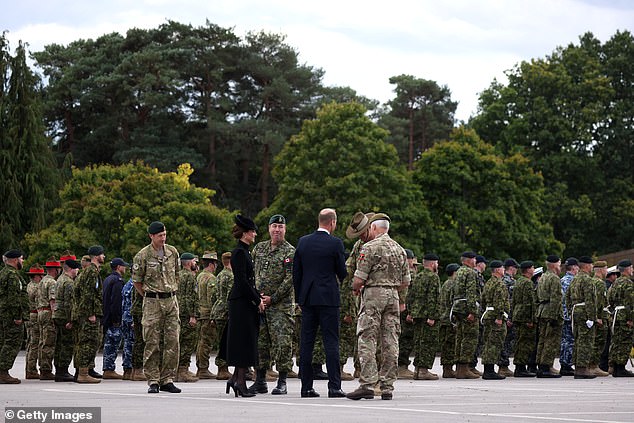 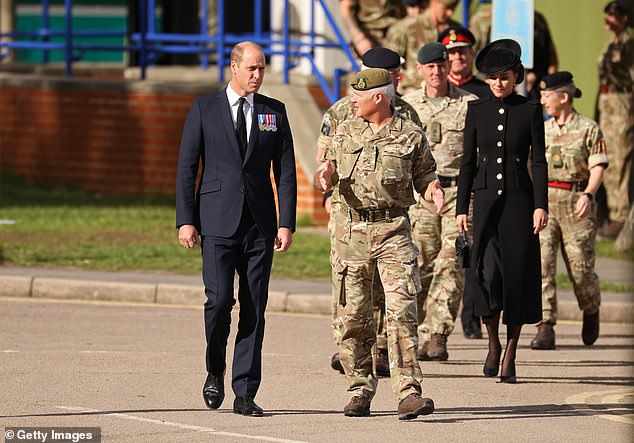 It comes after the pair chatted to crowds yesterday at the late monarch’s residence at Sandringham in Norfolk, looking out over the sea of ​​tribute left in her memory.

William and Kate, both 40, began the visit by disembarking from a dark Range Rover near the estate’s historic Norwich Gates, where they were warmly greeted by huge crowds who had waited behind metal barriers to see them.

A benefactor, Gemma Schultz, spoke to William after he saw her baby wearing a Paddington top and talked about the bear’s popularity following the Queen’s skit featuring the marmalade-sandwich-loving character for her Platinum Jubilee Celebrations in June .

The Prince quipped: ‘I said, I think Paddington may have knocked the Corgi off the top spot now. The Corgis won’t be so good at that.’

After the discussion, Gemma told BBC News that William and Kate were ‘nice and genuine people’, adding: ‘We spoke to William and we spoke to Kate, they both said about his little outfits, how cute they were. …things they do for everyone is just so much fun.”

The Prince and Princess of Wales, who stayed for nearly an hour, chatting with royal fans, young and old, looked deep in thought as they read the messages on the sea of ​​floral tributes left at the gates of the royal residence.

William told a woman waiting in the crowd that yesterday’s procession was “very difficult” and “brought back a few memories” of walking behind his mother Diana’s coffin, before saying to her – almost in tears: ‘Don’t cry now, you ‘will start me’.

William also heard a mourner say that the Queen was “everyone’s grandmother,” and Prince George, nine, understood she had passed away, but Princess Charlotte, seven, and Prince Louis, four, were fewer. Meanwhile, Kate told a woman she would burst into tears if she read too many condolences.

The Princess of Wales only visited Pirbright last year and repeated Princess Diana when she smiled wearing a helmet as she posed in an army tank on the occasion of Armed Forces Day.

The 40-year-old shared photos of herself helping out in an armored vehicle during a visit to the academy, where she met new recruits last November.

The photos evoked memories of the late Princess as they bore an uncanny resemblance to when she also donned a helmet while riding in a tank during a visit to the Royal Hampshire Regiment in Tidworth in 1998.

Kate used the Instagram account she shares with Prince William to write a personal message to mark the occasion.

In a heartfelt message, she wrote: “Today, on Armed Forces Day, William and I would like to pay tribute to the brave men and women, past and present, who served in all our armed forces, at sea, on land and in the air.” , here in the UK and around the world.

“Thank you for all the sacrifice you and your families have made to keep us safe.”

She added: ‘Last year I had the honor of spending time with the @BritishArmy to see how they train waitstaff and new recruits.

“It has been great to see first hand the many important and varied roles the military plays day in and day out to protect us all, and I look forward to discovering more about the @RoyalNavy and @RoyalAirForceUK in due course. ‘

To show that she had posted the message personally, she signed it with a ‘C’.