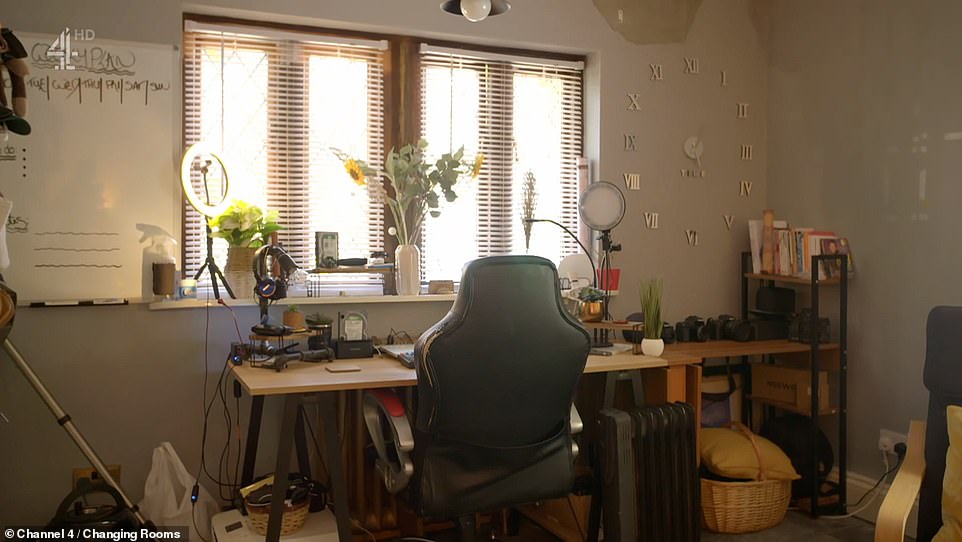 “It looks like the Wizard of Oz!” Viewers in dressing rooms are divided over a VERY bold 1970s-inspired makeover, complete with green velvet curtain obscuring an olive green office nook

Locker room viewers were split across a bold green office space hidden behind a velvet curtain in last night’s episode, with some comparing it to something from the Wizard of Oz.

Laurence Llewelyn-Bowen and guest designer Whinnie Williams visited the town of Haworth in the city of Bradford, West Yorkshire, to meet photographer Christian Jaemes and his girlfriend Charlotte.

The couple swapped homes with Christian’s mother Sonya, who lives next door, hoping to resolve their design dilemmas within 48 hours with the help of the Channel 4 team.

Christian and Charlotte’s sitting room and workspace needed some TLC as the photographer’s work and family life merged into one.

Laurence Llewelyn-Bowen and guest designer Whinnie Williams visited the town of Haworth in the city of Bradford, West Yorkshire, to meet photographer Christian Jaemes and his girlfriend Charlotte, whose sitting room and workspace needed some TLC as the photographer’s work and private life were mixed in a. Pictured, the room before the makeover 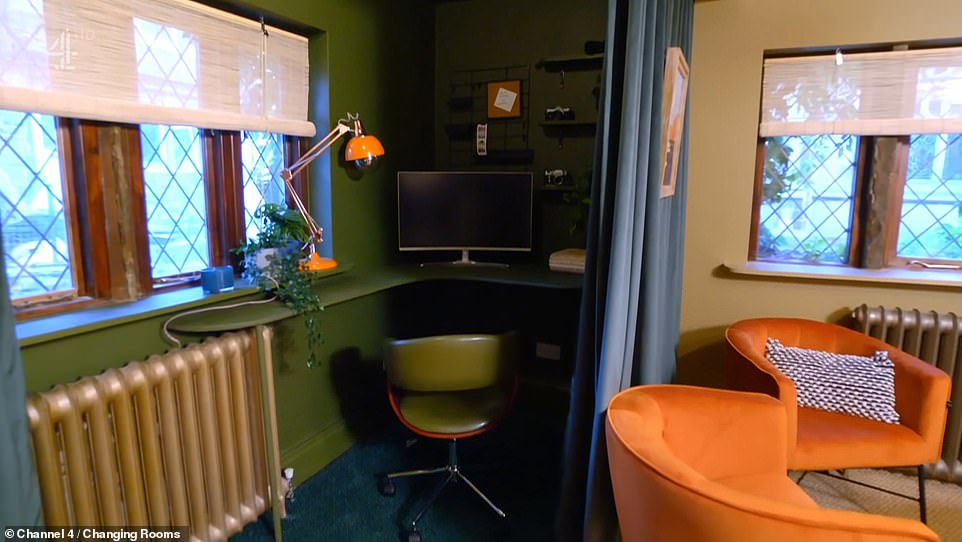 Whinnie wanted to bring the Hollywood glamor of the 70s to Yorkshire by keeping the living space neutral with lots of textures and using rich dark colors for the office. But the green office corner (photo left) divided the opinion online 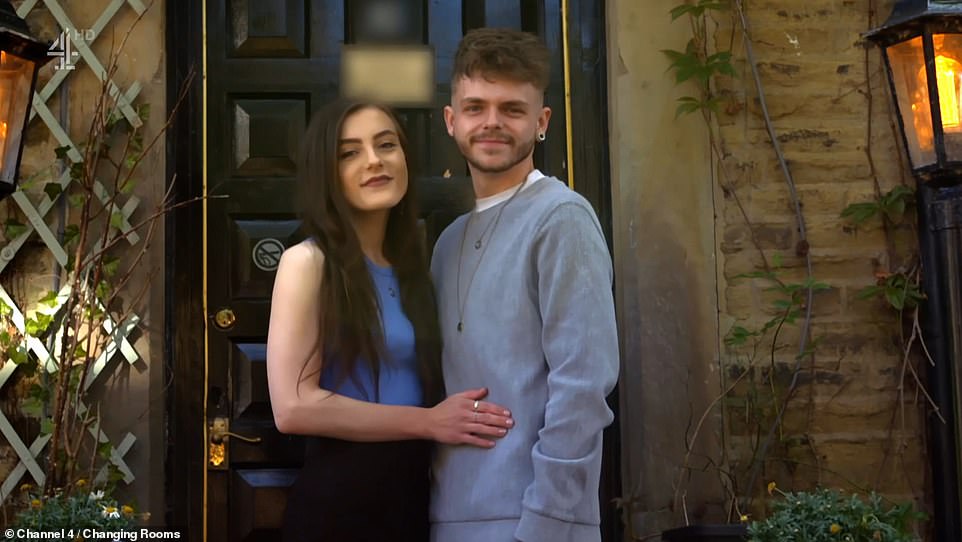 Photographer Christian James and his girlfriend Charlotte, pictured, wanted to find a way to revamp the living space in the 1770 cottage. They traded houses with his mother, who lives next door, in last night’s episode 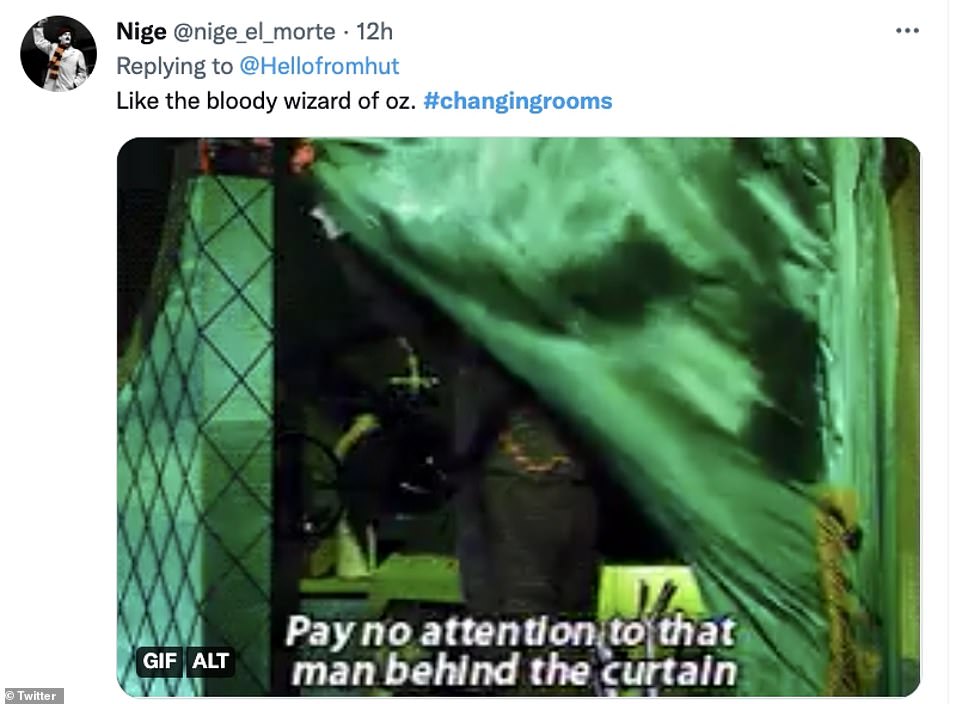 Meanwhile, Sonya and Nathaniel wanted to find a way to renovate their kitchen in the old workers’ cottages of 1770.

Teaming up with Laurence, Christian and Charlotte, Sonya’s dated kitchen got a vibrant yellow makeover, complete with hilariously faked Georgian portraits of the family.

But it was Sonya and Nathaniel’s transformation of Christian and Charlotte’s cottage under the watchful eye of Whinnie that really got viewers talking.

Many pointed to the “horrible” green velvet curtain that the designer placed in the living room to turn it into a separate office space.

One viewer compared it to the ‘Wizard of Oz’, while another added, ‘That green velvet is hideous against the olive walls.’

Another tweeted: “What planet does the color of those curtains match with that awful green on the walls?” 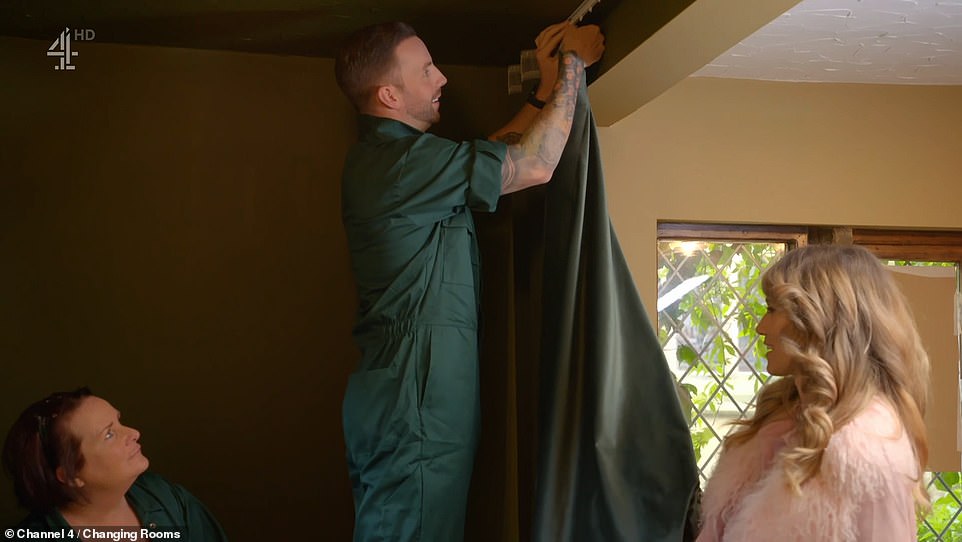 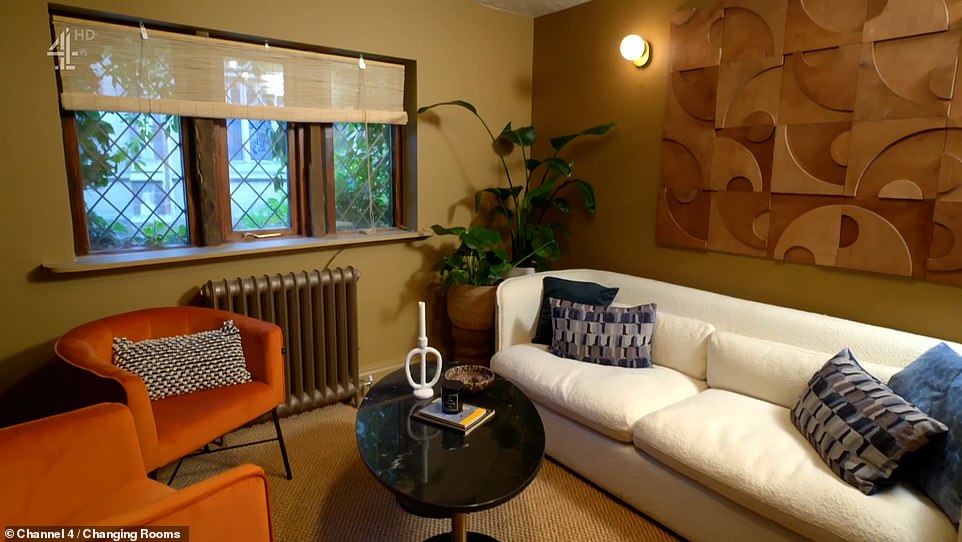 However, others insisted it was one of the best makeovers they’ve seen on the show, with many loving the 3D wooden art panel. Pictured, the 1970s-inspired renovation

Many others pointed out that the Artex added to the walls was dated with one person writing, ‘Well, that tops it all off, hospital curtains! I thought it couldn’t get any worse after the Artex!’

Another tweeted: ‘I think I’d rather have marmite on my walls instead of artex #dressing rooms.’

However, others insisted it was one of the best makeovers they’ve seen on the show, with many loving the wooden art panel. 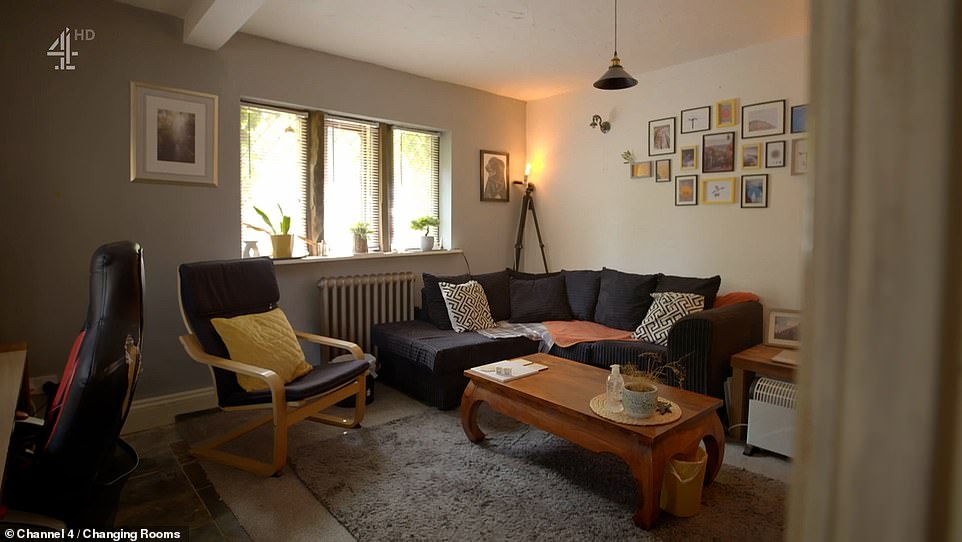 The sitting room used to be a dark space with a navy blue sofa and plain white walls with an old-fashioned dark wood coffee table in the center of the room, pictured 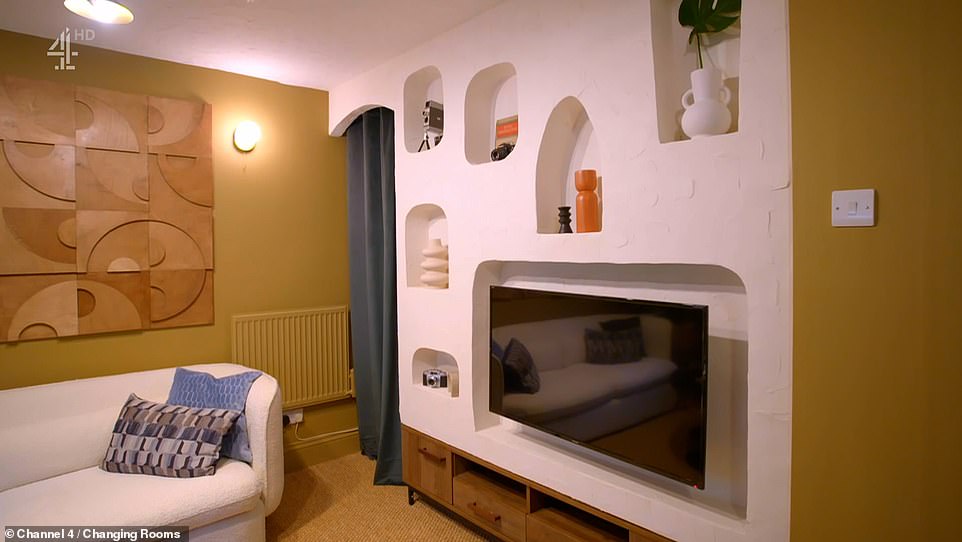 Many others pointed out that the artex added to the walls was dated with one person writing they thought it “couldn’t get worse after the artex” placed on the ceiling and walls. Pictured, after the transformation

The room was divided in two with a large green curtain and behind it an olive green office space.

In the small room was a dark green desk on which Christian’s computer stood and a bright orange lamp.

Across the room, Whinnie brought 1970s Hollywood glamor to Yorkshire.

She created a luxurious neutral living space for the couple to relax in, complete with the 3D wall art.

When explaining the new look, she said: ” [the artex] is such a Marmite feature in this room, so they will either love it or hate it. I just wanted it to be all about the textures.

“The brief I went for was a California cottage and I just wanted it to feel really 70’s retro and I was all about texture, but keeping it very calm and muted.” 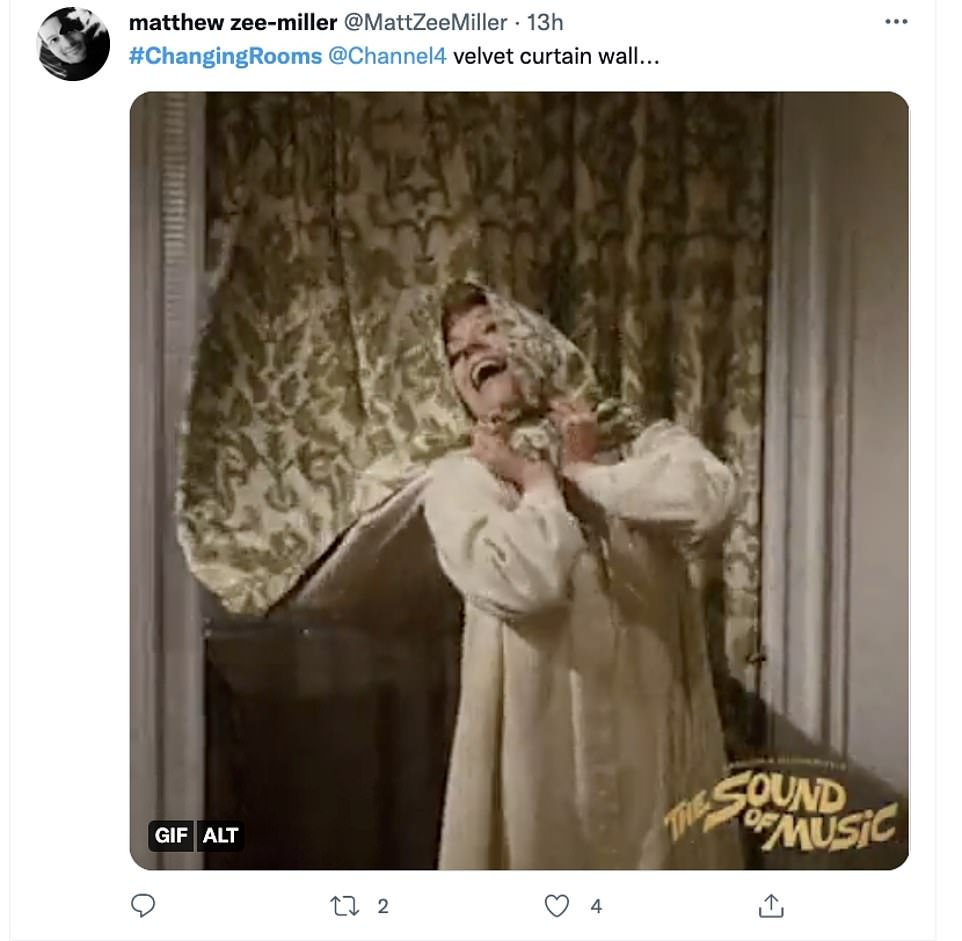 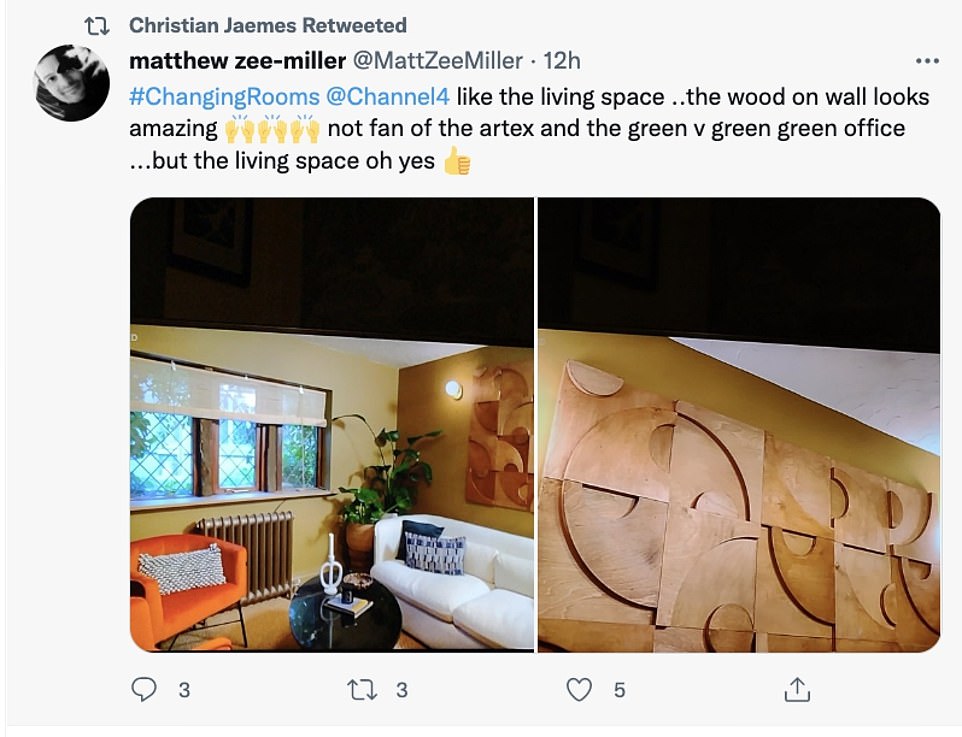 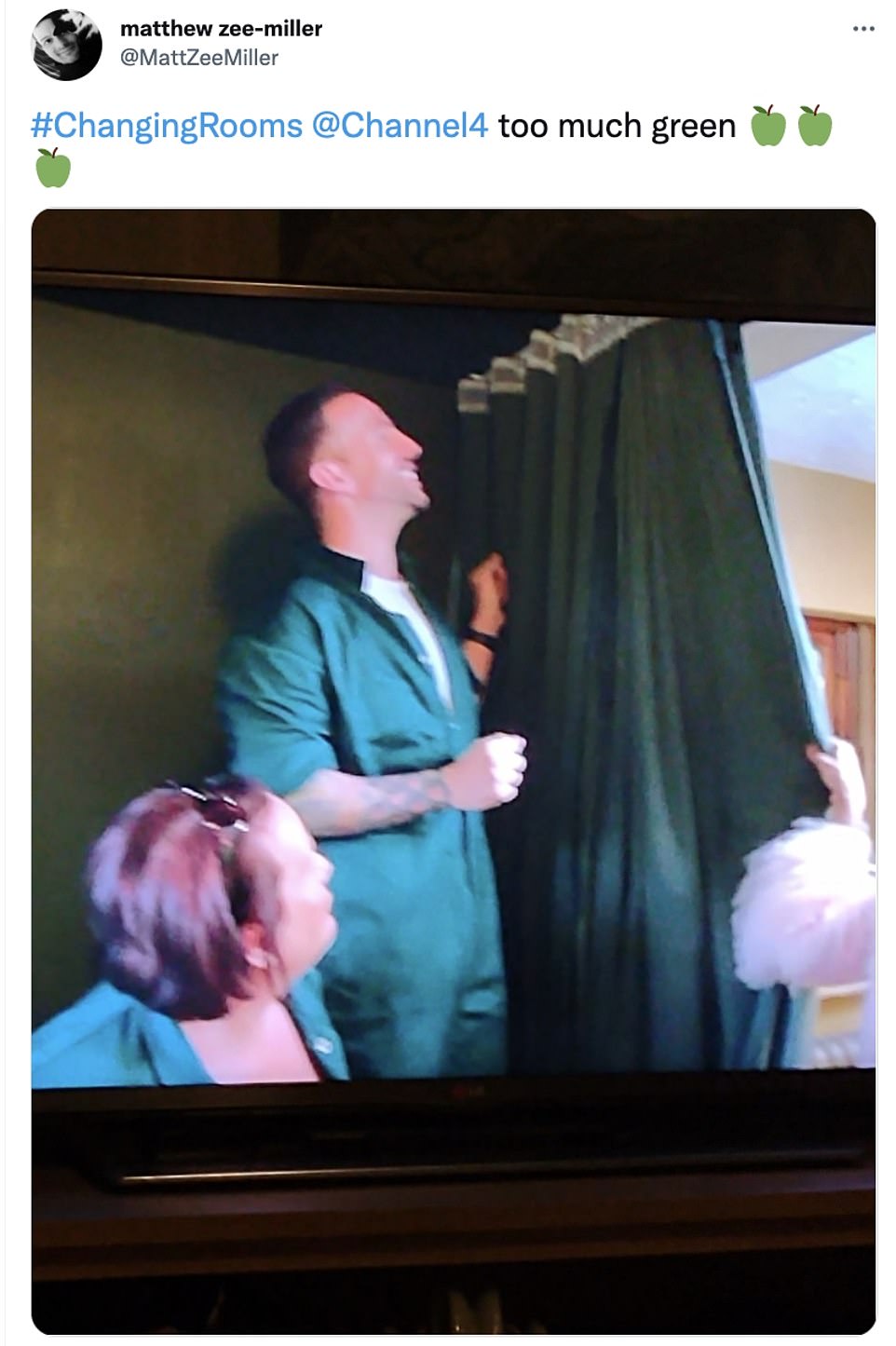 The room left viewers divided, some criticized the green curtains, saying it resembled the Wizard of Oz or Sound of Music