Liverpool was once the ‘Serengeti of Northwest Europe, revealing ancient footprints’

Hundreds of ancient footprints found on a beach in Merseyside show that wolves, lynx and wild boars roamed the area along with humans before a major decline in biodiversity 5,500 years ago.

The first date back nearly 9,000 years and the youngest are about 1,000 years old, researchers say.

The study reveals how the coastal environment changed over thousands of years, as sea levels rose rapidly and people settled permanently on the water.

University of Manchester experts found that the area close to the modern coastline in Formby was a center of human and animal activity in the first few thousand years after the last ice age.

It was such a biodiversity hotspot with large grazers and predators that it is called a ‘Northwest European Serengeti’.

The sandy stretch of England’s northwestern coast is already known for being home to one of the largest collections of prehistoric animal tracks on Earth.

Hundreds of ancient animal and human footprints found on a beach in Merseyside point to a major decline in Britain’s biodiversity about 5,500 years ago, researchers have found 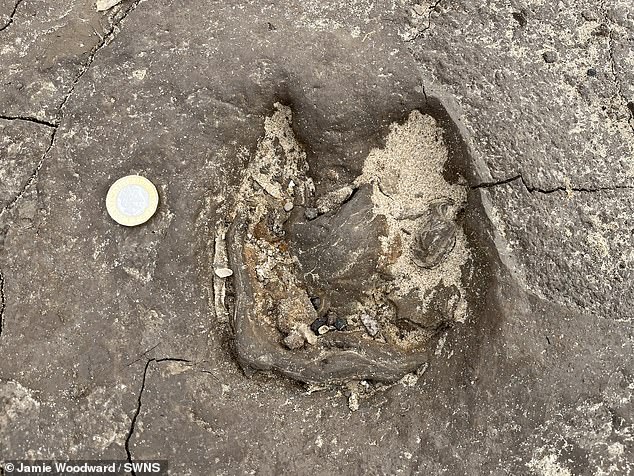 Experts from the University of Manchester found that the area close to the modern coastline in Formby was a center of human and animal activity in the first few thousand years after the last ice age. Pictured: A red deer’s hoof print in the ancient mud on Formby beach, dating back to about 8,500 years ago 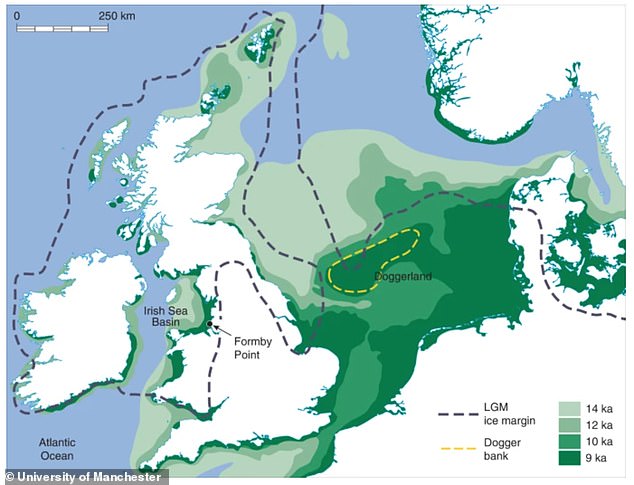 Global sea levels rose rapidly after the last ice age, leading to the loss of landscapes. The location of Formby Point in the Irish Sea Basin is shown in this image above

But now, with the hope of radiocarbon dating, the most species-rich footprint beds at Formby Point turned out to be much older than previously thought.

The beds describe an important period in Britain’s natural history from the Mesolithic to the Middle Ages (9,000 to 1,000 years ago).

They show that when global sea levels rose rapidly after the last ice age, humans were part of rich intertidal ecosystems alongside aurochs, red deer, roe deer, wild boars and beavers, as well as the predators wolf and lynx.

In the agriculture-based societies that followed, human footprints dominated the Neolithic period and later footprint beds, in addition to a marked decline in the richness of large mammal species.

This could be the result of several factors, the researchers say, including habitat shrinkage due to sea level rise and the development of agricultural economies, as well as hunting pressures from a growing human population.

The size and shape of one of the discovered human footprints suggests it belonged to a young man — perhaps a teenager.

It has a very obvious protrusion of a bunion on its little toe, which Dr. Alison Burns, who spent six years doing field research, said it was “a tailor’s bunion.”

She added: “They were usually barefoot, so if they sat down, the little toe would have rubbed on the ground.”

In total, there are 31 footprint beds, indicating a period of dramatic change in the area’s ecosystem. 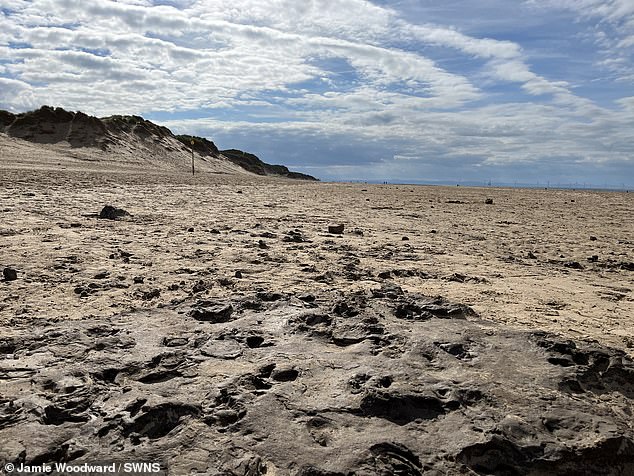 The beds describe an important period in Britain’s natural history from the Mesolithic to the Middle Ages (9,000 to 1,000 years ago). Pictured: A Mesolithic footprint bed about 8,500 years ago covered in red deer hoof prints 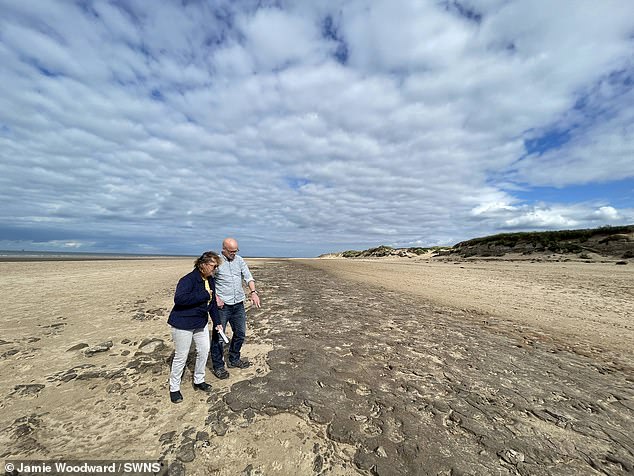 In all, there are 31 footprints, indicating a period of dramatic change in the area’s ecosystem. Pictured: Dr. Alison Burns and Professor Jamie Woodward inspect 8,500-year-old animal and human footprints in one of Formby’s Mesolithic mud beds 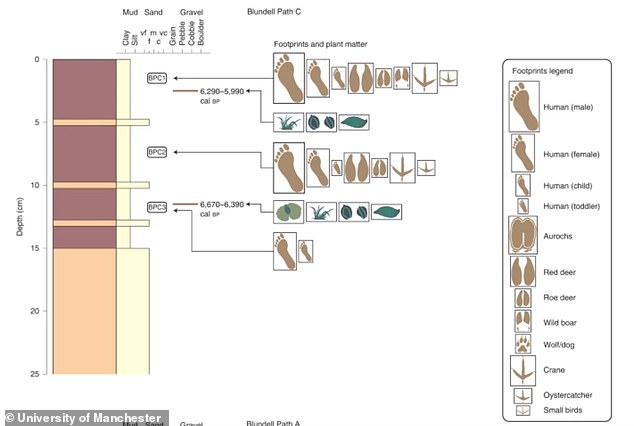 In total, there are 31 footprint beds, indicating a period of dramatic change in the area’s ecosystem 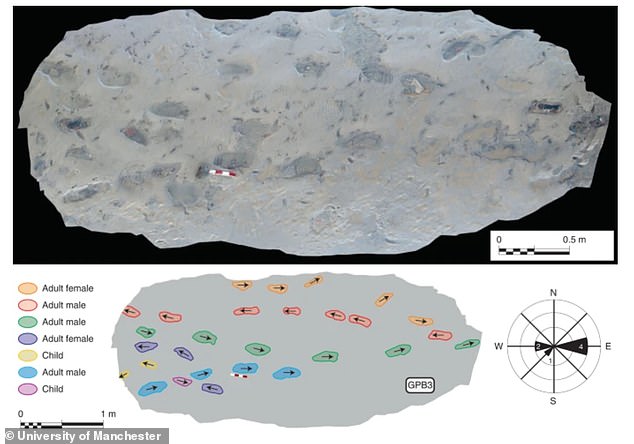 “Until about 6000 years ago, there was a very diverse landscape with all those animals,” said Professor Jamie Woodward of the University of Manchester. BBC news.

‘After about 5,500 years ago, we see a lot of human footprints, some deer and dogs, but not much else.

“So what we’re seeing — through the footprints — is a landscape that’s changing with sea level rise, and also with the advent of agriculture which is likely to put a lot more pressure on this ecosystem.”

He added: ‘Assessing the threats to habitats and biodiversity from rising sea levels is an important research priority for our time – we need to better understand these processes in both the past and the present.

dr. Burns said: ‘Formby’s footprints represent one of the world’s largest known concentrations of prehistoric vertebrate tracks. Well-dated fossils from this period are missing from the landscapes around the Irish Sea Basin.

“This is the first time such a fauna history and ecosystem has been reconstructed solely from footprints.”

Footsteps taken thousands or even millions of years ago have left traces in many parts of the British coastline, which scientists have been able to find, study and convert into a deeper understanding of our ancient history.

The new research is published in the journal Nature Ecology & Evolution.

Britain began transitioning from ‘hunter-gatherer’ to farming and settlement about 7,000 years ago as part of the ‘Neolithic Revolution’

The Neolithic Revolution was the world’s first verifiable revolution in agriculture.

The period saw the widespread transition of many disparate human cultures from nomadic hunting and gathering practices to farming and small settlement building.

Stonehenge, the most famous prehistoric structure in Europe, possibly the world, was built by Neolithic people and added later during the early Bronze Age

The Revolution was responsible for turning small groups of travelers into established communities building towns and cities.

Some cultures used irrigation and clearing to improve their farming techniques.

Others stored food for times of famine, and agriculture eventually created different roles and divisions of labor in societies and trading economies.

In the UK, the period was triggered by a massive migration or popular movement from across the Channel.

The Neolithic Revolution saw people in Britain move from groups of nomadic hunter-gatherers to established communities. Some of the earliest monuments in Britain are Neolithic structures, including Silbury Hill in Wiltshire (pictured)

Today, prehistoric monuments in the UK stretch from the time of the Neolithic farmers to the invasion of the Romans in 43 AD.

Many of them are looked after by English Heritage and range from standing stones to massive stone circles, and from burial mounds to hill forts.

Stonehenge, the most famous prehistoric structure in Europe, possibly the world, was built by Neolithic people and later completed during the Bronze Age.

Neolithic structures were mostly used for ceremonies, religious festivals and as centers of trade and social gatherings.

Erling Haaland and Phil Foden have to share the Player of the Match prize, but not the match ball!