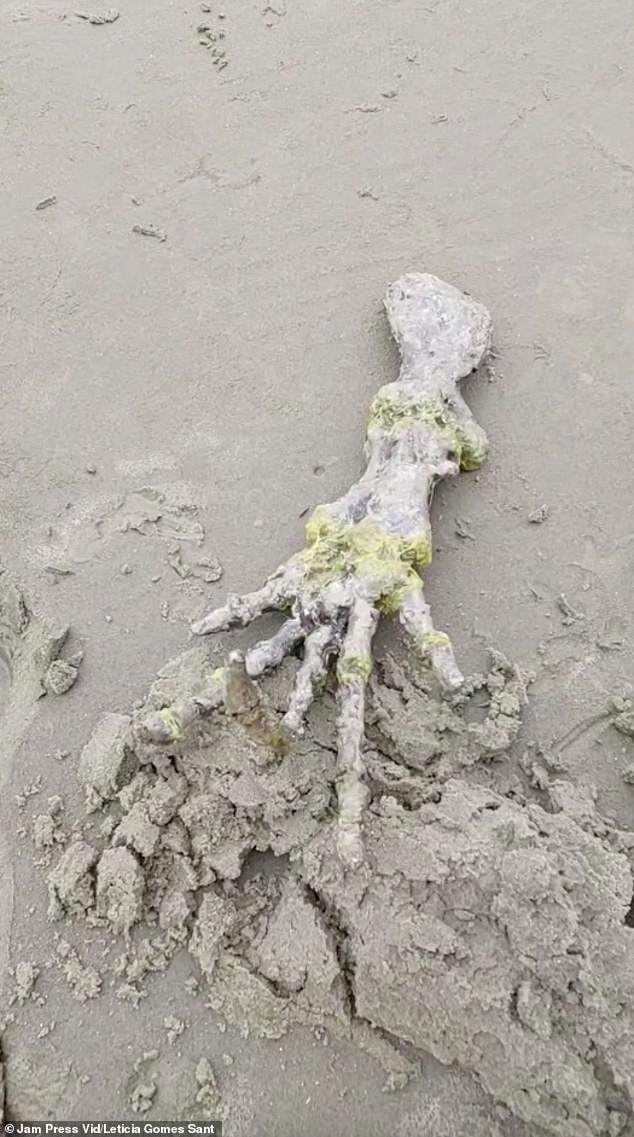 An appendage that washed up on a beach in Brazil this week sparked fear for a couple who said it “looks like ET’s hand” when they found it nestled in the sand — but a biologist assures it’s of this world.

Leticia Gomes Santiago and her boyfriend, Devanir Souza, were strolling along the shoreline when they came across a giant hand with long bony fingers.

Images of it have been seen by marine biologist Eric Comin, who said the hand belonged to a cetacean – an aquatic mammal that includes whales, dolphins and porpoises.

And based on the decomposition, the ocean animal died about 18 months ago.

Although the appendage looks otherworldly, it is a trait of early whale ancestors that walked on land about 50 million years ago. 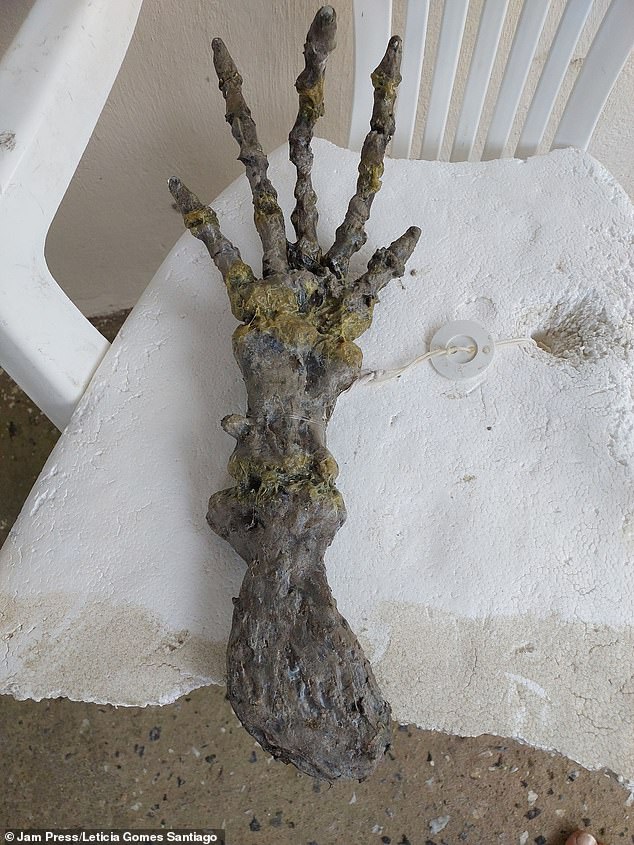 The pair thought it resembled ET’s hand, but took it home for further analysis

Beneath the interdigital flesh of a whale or dolphin’s fins are five “fingers,” or the pentadactyl limb.

This is found in humans, amphibians and a range of other animals and demonstrates a shared ancestry.

The pair filmed it and she placed her flip-flop next to the creepy hand with long bony fingers to show off the large size.

Santiago said, “It’s very big. We don’t know what animal it is, even worse if it’s an alien.’

The pair shared the discovery with locals, who joked that “it looked like E.T.’s hand,” or a “mermaid hand.” ‘

Leticia Gomes Santiago and her friend Devanir Souza were strolling along the shoreline when they came across it. She put it next to her shoe to show how big it is 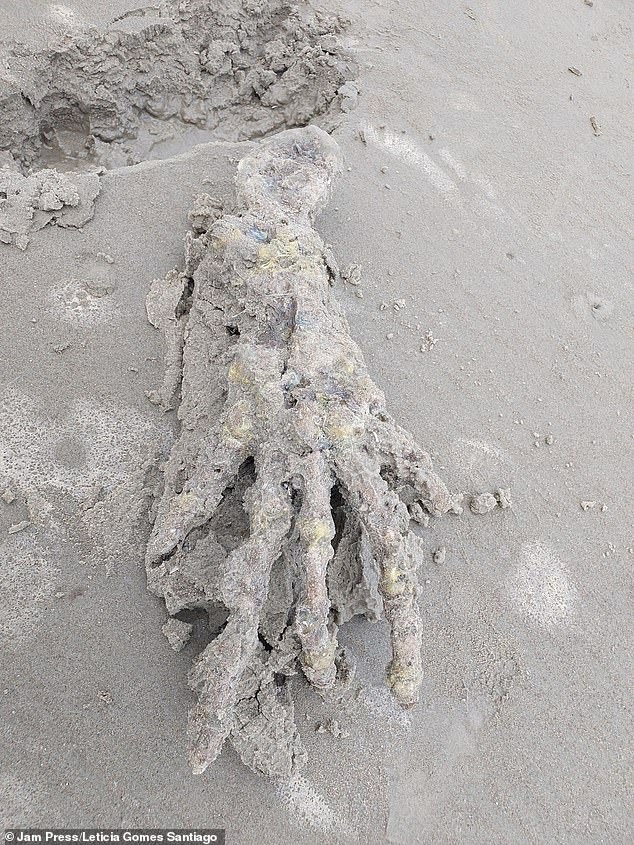 A marine biologist said the hand belonged to a cetacean – an aquatic mammal that includes whales, dolphins and porpoises

Due to the size, Comin said the bones probably belonged to a dolphin, especially since they are commonly found in the region.

The biologist added that anyone who finds animal remains on the beach should inform the region’s environmental agency, the Cananéia Research Institute (IPEC).

IPEC spokesman Henrique Chupill, who also said the skeleton probably belongs to a cetacean, said: ‘We always prioritize leaving the bones on the beach so that it doesn’t disrupt the nutrient cycle within the ecosystem.

“Ultimately, if there is any scientific interest, we collect them for research. If they are recently deceased animals, we pick them up to perform autopsies and determine the cause of death.’

While seeing the inside of a flipper is amazing to some, scientists are more familiar with the appendage.

Dr. Mark D Scherz, assistant professor of vertebrate zoology and curator of herpetology at the Statens Naturhistoriske Museum in Denmark, dissected a beaked whale that washed ashore in 2021 and pulled the flesh away to reveal the bizarre “hands.”

Speak against IFL Science, said Scherz: ‘Flippers have evolved repeatedly in different genera of mammals and reptiles, each time in a different way; the basic structure is the pentadactyl limb, but the specific structure [of the limbs] differ very strongly.’ 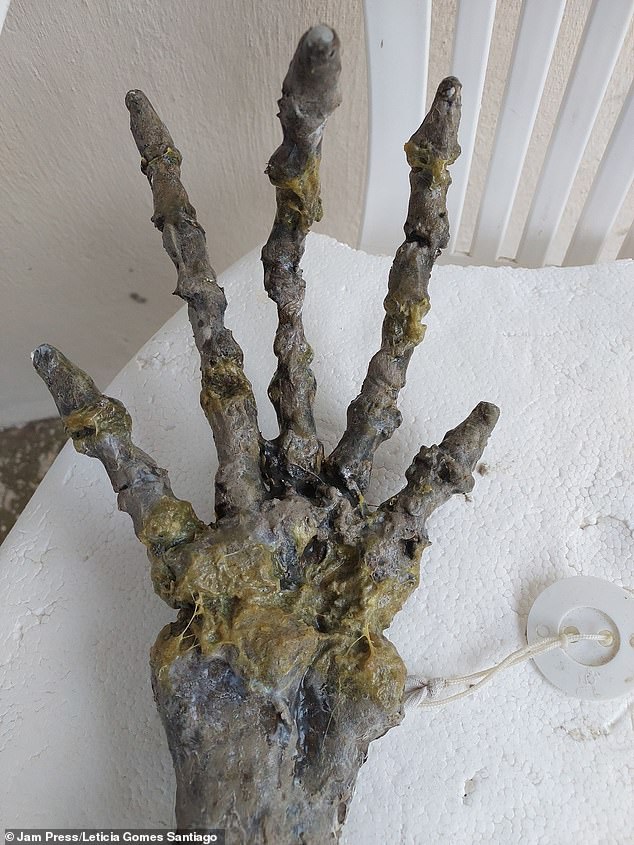 And based on the decomposition, the ocean animal died about 18 months ago 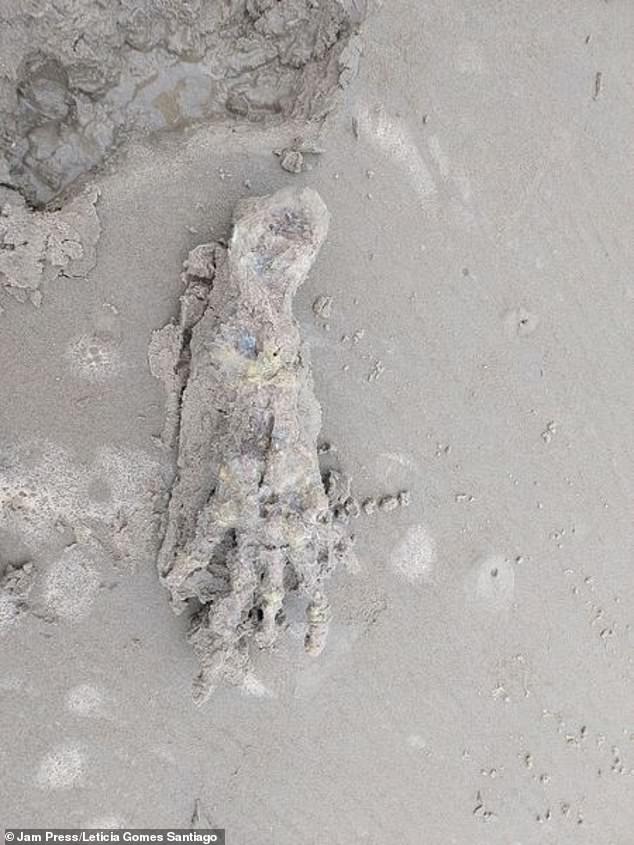 Although the appendage looks otherworldly, it is a trait of early whale ancestors that walked on land about 50 million years ago.

Whales, dolphins and porpoises are descended from a stocky fox-sized animal with an elongated body and tail, which experts compare to a miniature deer.

This ancient creature roamed the land and hunted for food in the water until it went completely into the water.

‘I have to thank Mikkel Høegh Post, who prepared the pinball in this way! Great to see him and the other researchers working on this animal,” Scherz shared on Twitter.

‘Now this is that flipper! Mikkel carefully tied each bone to a grid, preserving its precise arrangement through maceration. Look at those articular cartilages!’

The first evidence that whales evolved from land animals was discovered in 2008 in Pakistan.

Hans Thewissen, of Northeast Ohio Medical University and involved in the discovery, and his team determined that the creature, named Indohyus, waded through the water like a hippopotamus in search of food and as a means of evading predators. land to a fully aquatic lifestyle.

After a deeper analysis, researchers discovered similarities between the skull and ears of the Indohyus and whales.

They found that the bones of Indohyus had a thick outer layer, much thicker than other mammals of this size.

Beneath the interdigital flesh of a whale’s fin are five “fingers,” or the pentadactyl limb, found in humans, amphibians and a range of other animals. They show a shared common ancestor 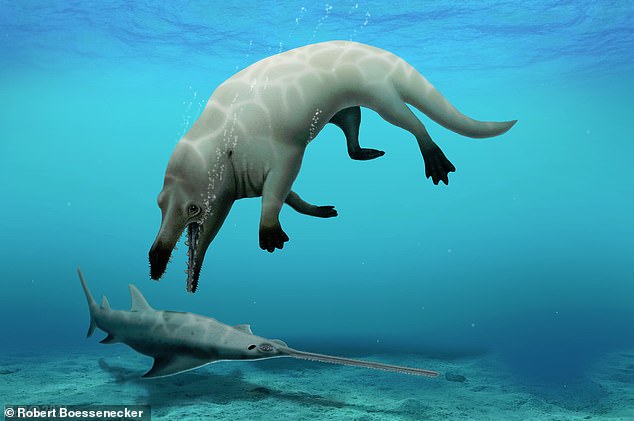 The Phiomicetus anubis whale was about 10 feet long with a body weight of about 1,300 pounds and was probably an apex predator when it roamed the ancient seas. He lived on land and in the sea

This trait is often seen in mammals that are slow waders in the water, such as the modern-day hippopotamus.

Another clue to how Indohyus lived was found in the bones of his limbs, which were thicker and heavier than hippos.

This suggests that the animal was a wader, with heavy bones to prevent it from floating.

Based on this evidence, Thewissen suggested that whale ancestors took to the water as a mechanism to avoid predators and did not develop a specific aquatic feeding behavior until much later.

The new whale, named Phiomicetus anubis, was about 10 feet long with a body weight of about 1,300 pounds and was likely an apex predator when it roamed the ancient seas.

The whale’s genus name honors the Fayum Depression, and the species name refers to Anubis, the ancient Egyptian dog-headed god associated with mummification and the afterlife.