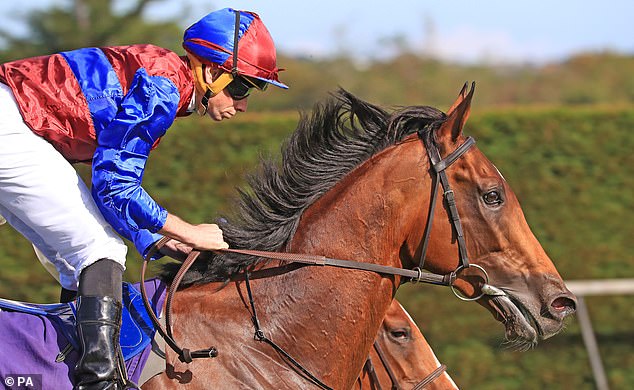 Luxembourg set out for a tilt in the Prix de L’Arc de Triomphe in three weeks with a hugely encouraging win in the Group One Irish Champion Stakes at Leopardstown.

He is now the joint favorite 6-1, but Aidan O’Brien’s one-time Derby hopes missed the summer with a muscle problem after finishing third in the 2000 Guineas in May.

The Ryan Moore-ridden 7-2 shot, which defeated Onesto half a length, came back into action last month when he narrowly won the Royal Whip Stakes at the Curragh.

O’Brien said: ‘The plan was three races if we could get it back: the Curragh; here and the Arc. We didn’t think we were going to get him to the Curragh and had to push for it. There was 20-30 percent improvement in him. It is clearly a very good horse. Chances are he could be better at a mile and a half.

“Ryan was very impressed with him and he’s not an optimist by nature!”

Vadeni, who was sent off the 7-4 favourite, finished third after Christophe Soumillon was dramatically switched from the outside to the inside rail, affecting the foal’s momentum.

O’Brien’s two-year-old Auguste Rodin strode away with the Group Two KPMG Champion Juvenile Stakes and is likely to shoot for a Group One target next, with the Dewhurst Stakes at Newmarket and the Vertem Futurity Stakes at Doncaster under consideration.