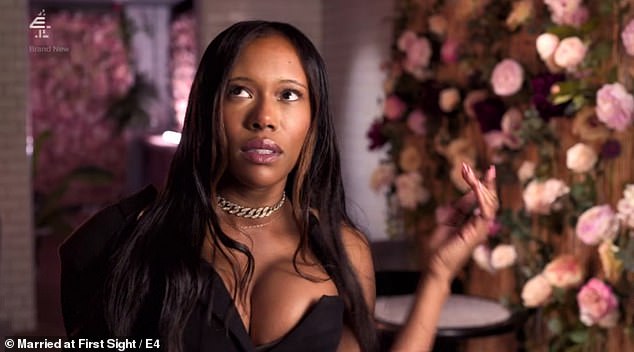 Viewers of Married at First Sight UK have called a bride a ‘handful’ as the new series kicks off.

The first episode of the new series, which aired tonight at 9pm on E4, showed the brides and grooms meeting for the first time at hen parties in London.

And St. Albans PA Whitney Hughes, who was paired with Duka Cav, impressed viewers — as well as her fellow contestants.

As she worked through her long list of requirements for a husband and clashed with other brides, viewers took to Twitter to share their thoughts on the 31-year-old and joke that she needed to “chill out.”

When the other brides asked Whitney what she was looking for, the 31-year-old replied that she wanted a “strong man.”

She continued: “Long, tanned, tight, thick thighs. I want him to have big, massive thighs.

“I won’t be impressed if he doesn’t have a full beard. No bandages, because that’s not what I’m here for.’

She told the camera that people often make “negative” assumptions about her.

Whitney explained that people think she is “cold, cocky, arrogant, too confident, rude.”

But she added that people see her friendly side once they get to know her.

Whitnety, 31, from St. Albans, tangled feathers among other brides-to-be and viewers as she worked through her long list of requirements for her husband 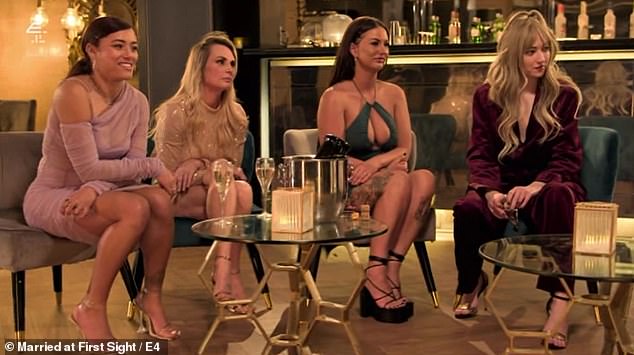 Whitney described herself as “single since the dawn of time” and admitted she’s never been in love – adding that she often runs away when things “get too close.”

She said, “I think I deserve the most in life.”

Just minutes after her first meeting with the other brides, Whitney ruffled feathers as she clashed with Jess, 30, over the issue of sleeping with the husband they’re compared to the first night.

After Jess said she would consider wrestling on the wedding night, Whitney hit back, arguing: ‘I feel like men should work for that motherfucker’

After the explosive row, viewers took to Twitter to share their thoughts on Whitney, with some people labeling her as “the villain” of the latest series.

One person wrote, “Whitney ready to fight,” while another quipped, “Whitney, honey. chill.’

One excited viewer said, “I can already tell Whitney is going to be the troublemaker.”

Others labeled her a “handful,” while one viewer said she radiated “diva vibes.”

Viewers took to Twitter to share their thoughts on Whitney, who they say could be the ‘troubleshooter’ of the new series

Despite impressing audiences with her high standards, Whitney made a number of confessions that deeply moved viewers.

Speaking to the other brides, she revealed that her mother had passed away and would not be walking down the aisle with her on her wedding day.

Later in the episode, she revealed that her mother’s death had come suddenly when she was killed in a car accident at the age of 55.

“She was driving home from work and a man bumped into her,” Whitney explained in tears.

‘I really miss her. I want to say she’s my best friend.’

Whitney burst into tears and said, ‘I don’t think I’d have done this before my mother, but why not? Life is so short, just jump in.”

Whitney, who has also been a road safety campaigner since her mother’s death, was linked with bubbly 31-year-old Duka Cav.

After hearing how Whitney lost her mother in a car accident, some viewers suggested that her tough appearance could be a defense mechanism

The HR recruitment coordinator moved from Yugoslavia to the UK when he was 10 years old as his family fled the war.

On the morning of her wedding day, Whitney spoke of her grief for her mother as she had her hair pinned.

She said, ‘It doesn’t get any better. It just is what it is.’

Upon hearing Whitney’s heartbreaking story, some viewers softened on the PA.

One person said, ‘I can’t imagine having my wedding without my mom around. I feel so sad for Whitney.

Another person wrote: ‘Whitney looks like someone’ [who] maintains a very rigid front to try and protect itself.

“She comes across as abrasive, but I don’t think that’s her true personality.”