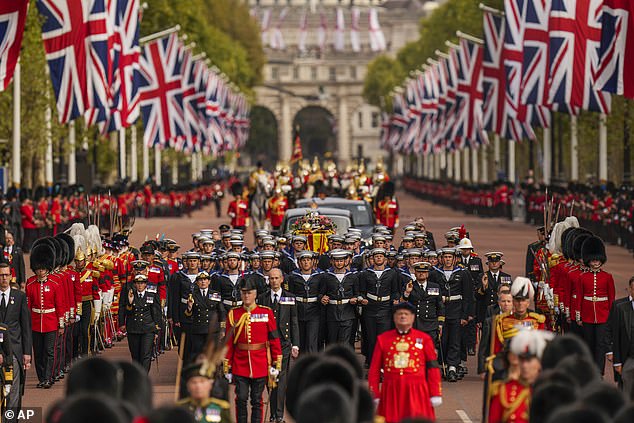 A man has been arrested after trying to jump a barrier just before the Queen’s procession began making its way through the streets of London today, following a moving state funeral for the late monarch at Westminster Abbey.

Thousands of mourners had gathered to watch the queen’s casket make its final journey, after many queued all night to secure a first-class vantage point.

But one of those in attendance attempted to jump the barriers to Parliament Street at the Cenotaph and was arrested by police when the deceased monarch’s coffin emerged from the abbey just before the full procession began.

Queen Elizabeth II’s coffin is being pulled past Buckingham Palace today after her funeral service at Westminster Abbey in central London. A man was arrested just before the procession started

The Queen leaves London after passing through Buckingham Palace for the last time, followed by her grieving family.

Her Majesty will be buried in Windsor next to her beloved husband Prince Philip and her parents after she drove 32 miles from Hyde Park Corner later this afternoon on a day filled with pomp and poignant symbolism to mark the passing of the longest-reigning monarch of Great Britain.

Sorrow was engraved on the faces of King Charles, his siblings and children, as well as the huge crowds that flooded The Mall, Whitehall and Parliament Square to bid farewell to the beloved monarch.

And applause and spontaneous cheer broke out as the Queen’s casket passed the Albert Memorial in Kensington on its way to Windsor. As the hearse pulled away, flowers were thrown onto the road by the crowd watching from behind a fence. Others waved Union flags as the fleet passed.

Who’s who at Westminster Abbey? Royals turn out in force