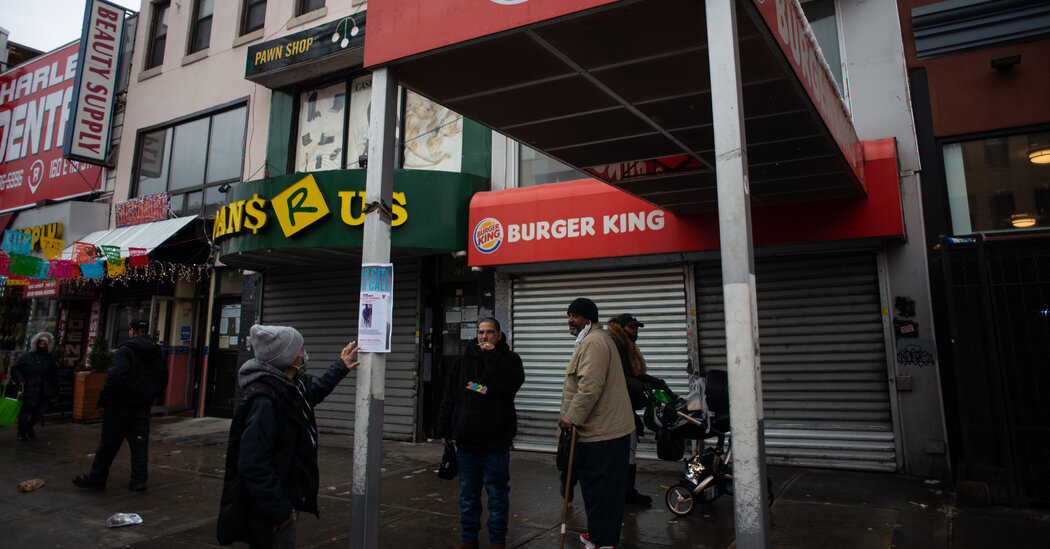 A man who, police say, fatally shot a 19-year-old worker at a Burger King in Upper Manhattan during a botched robbery has been arrested and charged with murder, Mayor Eric Adams and other officials said at a news conference Friday.

The man, Winston Glynn, had entered the fast food restaurant on 116th Street in East Harlem shortly after midnight Sunday and pulled out a gun, police officials said.

He demanded that a cashier, Kristal Bayron-Nieves, hand over cash, officials said. But as she crouched behind a counter and struggled to find the key to open the machine, authorities said Mr Glynn, 30, shot her once. She was hit in the chest and died in a hospital.

Mr Glynn was charged with several charges including first degree murder, theft and criminal use of a firearm, police said. A lawyer for Mr Glynn was not immediately available on Friday.

Speaking to police officials at the department’s headquarters, Mr. Adams said the deadly shooting was a disturbing example of the gun violence he made a central part of his campaign last year and has promised to address at City Hall.

“I visited Kristal’s mother and only saw the pain on her face, and saw how much this incident tore her apart,” said Mr. Adams. “I don’t come to press conferences of arrests. But this one was so personal.”

The murder of Mrs. Bayron-Nieves was another painful loss in the part of East Harlem where she worked—a neighborhood where gun violence is on the rise.

Shootings in New York City had hit historic lows in 2018 and 2019, but increased significantly during the pandemic. Experts say trends in the second half of last year showed hopeful signs of improvement.

But the rate of shootings remains higher than before the pandemic and is particularly high in some parts of the city, including East Harlem. A few blocks from the Burger King in East Harlem, where Mrs. Bayron-Nieves was killed, an off-duty police officer was injured on New Year’s Day when he was hit by a bullet while sleeping in his car outside a station building.

Police said Mr Glynn had been identified on surveillance video with headphones similar to the ones he had with him during the shooting. He was arrested late Thursday at a home address in Brooklyn.

Glynn had worked at the same Burger King as the victim of the shooting between April and December 2020, police said, but officials had no indication that he and Ms Bayron-Nieves knew each other. Officials said he probably planned to rob a store he knew.

Mr Glynn, who wore a black ski mask, had already taken $100 from another register before the shooting, police said.

He had had four previous arrests, authorities said, including for criminal possession of a weapon in an incident where he brandished a knife.

In the days after Mrs. Bayron-Nieves was murdered, residents of East Harlem held several vigils, placing pink and white balloons, bouquets of flowers and more than three dozen candles at the entrance to the Burger King.

At one of the memorials, a niece of Mrs Bayron-Nieves, Kiara Fuentes, described the aftermath of an incident she said “hurted our family so much”.

“My Crystal did not deserve this. She didn’t wake up thinking she wouldn’t come home,’ said Mrs. Fuentes. “It’s heartbreaking. This should not happen to anyone, especially teenagers.”

The teen’s family had moved to New York from Puerto Rico a few years ago “in search of a brighter future,” Diana Ayala, a city council member whose cousin is a cousin of Ms. Bayron-Nieves, wrote on social media after the shooting.

Ms. Bayron-Nieves had recently received her GED and was working at Burger King to save money while planning her future, Nathalie Pagan, a family friend, told the New York Daily News this week.

The head of the department, Kenneth Corey, said on Friday that officials were trying to determine whether Mr Glynn has a mental illness.

“That could be a problem here,” Chief Corey said. “Maybe he’s someone who, had he gotten help earlier, could have saved this woman’s life.”

At a memorial service this week, Ms Ayala, who represents parts of East Harlem and the South Bronx, said she was concerned about the ripples of trauma that could continue after the shooting.

The teen’s 14-year-old brother was the one called that she had died in hospital, she said.

“That is a trauma that stays with us for years. Many of us grew up under the same circumstances,” said Ms Ayala. “It is inhumane and cruel to allow communities of color to live under these conditions.”

Women with apple-shaped bodies feel worse about themselves than ‘pears’