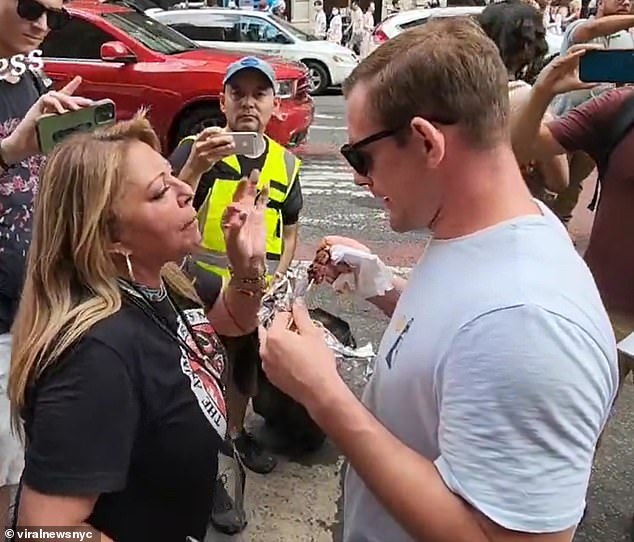 A man was filmed happily eating a shish kebab in front of animal rights activists as they protested outside several New York City stores.

The man, who has not yet been identified, was filmed Saturday eating his shish kebab outside the Nike store in New York City, where PETA was protesting the company’s use of animal products.

He came off the street and started eating his meal in front of the activists, according to @ViralNewsNYC, whereupon a woman confronts him and tells him, “You are disgusting. Who do you think You Are? You’re a coward, you’re just a coward.

“You’re a piece of shit and you’re embarrassing,” the woman continues. ‘What am I going to do? Nothing, you will die yourself.’

The video then cuts to another woman in a hat berating the man and asking him if “it feels damn good?” 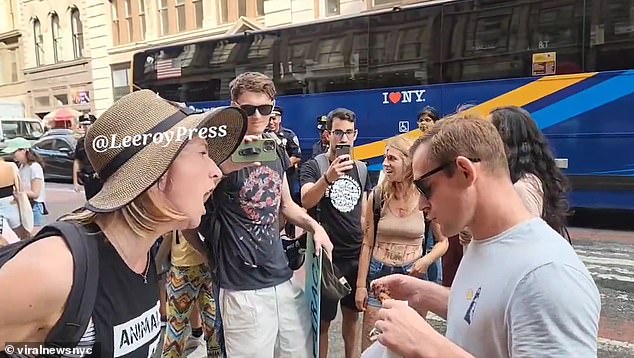 “You and your little jerk and your fucking way of killing animals and it feels good for the vegans, doesn’t it?” she yells at the man, who begins to nod and make a show of the remaining meat of his shish kebab.

“You’ve got all the blood on your face and on your hands,” the woman continues to scream. “It feels good with your little dick. 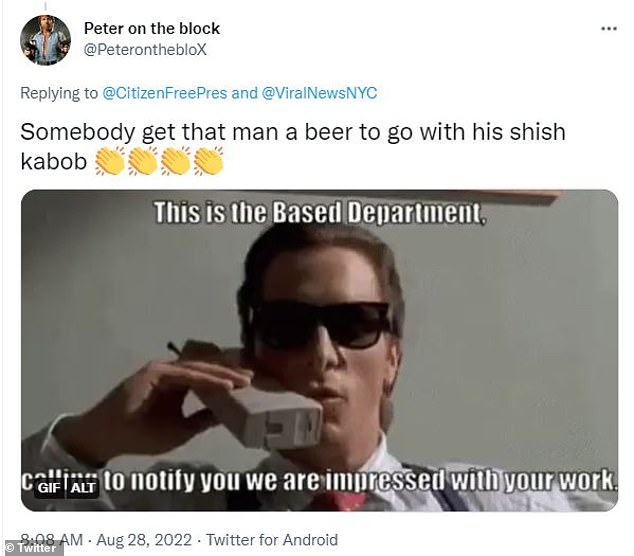 Many of those who responded appeared to be applauding the man, who was seen wearing a white t-shirt and sunglasses as he walked through Manhattan on Saturday.

A third Twitter user said he’d do the same if he lived in New York City, writing, “I’d bring 50 of my friends and have a giant barbecue.”

He then called the unidentified man a “stud.” 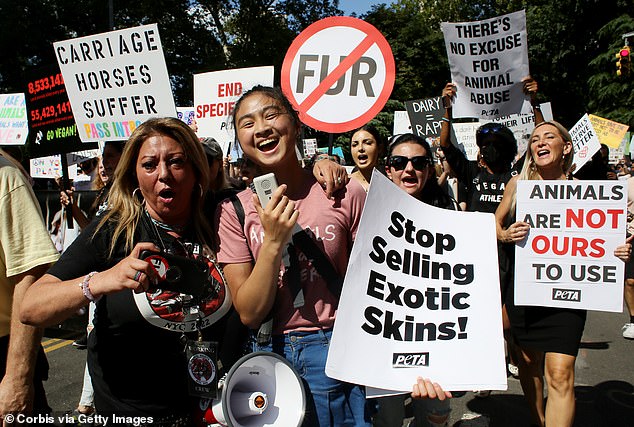 The confrontation came as PETA, the animal rights organization, held a planned demonstration in front of the Nike, Dior and Louis Vuitton stores to protest their use of animal products. 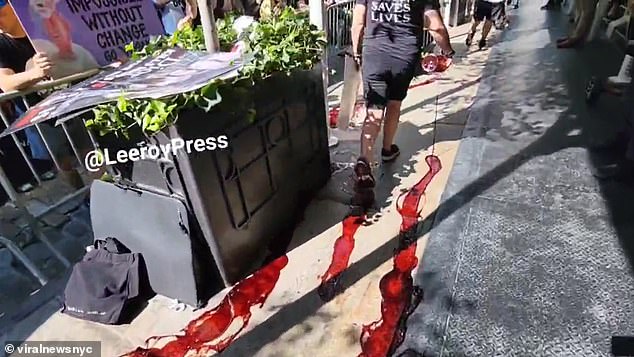 The confrontation came when the animal rights organization PETA held a planned demonstration in front of Nike, Dior and Louis Vuitton stores to protest their use of animal products.

in a interview Speaking to Viral News NYC, Ashley Byrne, PETA’s director of outreach communications, said the protest was “our opportunity to come together…to celebrate our movement, to let the world know that we are taking a stand together against speciesism, which is the idea that humans are superior to animals and that we have the right to use them for our purposes.

“I think we all want to be here today, for people to think about their relationships with animals and realize that animals are individuals,” she said.

“They always create, think and feel individuals like us, and they deserve better than to be exploited for human purposes.”

DailyMail.com has also reached out to her for comment.

Meanwhile, activists were filmed spilling fake blood in front of Louis Vuitton and Dior stores, chanting “Shame on what you do” and “Christian Dior, animal abuser.”

They also held a sign outside the Dior store that read, “Fur is dead,” and protested further outside the Nike store, chanting “kangaroos are not shoes” and “bloodbaths we don’t condone; leave the kangaroos alone.’