The street I grew up on: Mariella Frostrup, 59, presenter, author and campaigner shares memories of The Stables, Kilmacanogue, County Wicklow

By Yvonne Swann For Weekend Magazine

I was born in Norway and moved to Ireland when I was six with my younger siblings Danielle and Aksel. My Norwegian father Peter was a journalist who worked for The Irish Times, and my Scottish mother Joan was an artist.

We lived in Dublin briefly and then moved into the only house we’ve ever owned.

In my mind it was my real home and I lived there for much of my childhood, but actually it was not much longer than three years. By the time I left there, my parents had split up, my stepfather had come on the scene, and then my childhood ended in a sense, somewhat prematurely, when I was nine or ten years old.

The house was a converted stable block on the edge of a run-down hotel, surrounded by beautiful gardens, which we accessed through a hole in a wall. The gardens became our paradise.

There was a lake, gigantic rhododendron bushes and a huge tree that spread out like a house, which we played in because the leaves gave us shelter in all weathers. This was our secret world, and as soon as we got home from school, we ran amok.

The stables themselves were on a corner known for accidents. It had a very sharp turn and my mother spent at least one day a week dealing with horrific car accidents.

I especially remember a crash where an entire family was killed in a Mini by a juggernaut.

You walked straight into the kitchen with the stove and the tiles, and the rest of that floor was taken up by my mother’s studio. I think she painted landscapes, but I didn’t pay much attention to them.

My talent as a child was writing. Even before I discovered boys, when I wrote about heartbreak, I wrote poems about the joy of seagulls and calves. 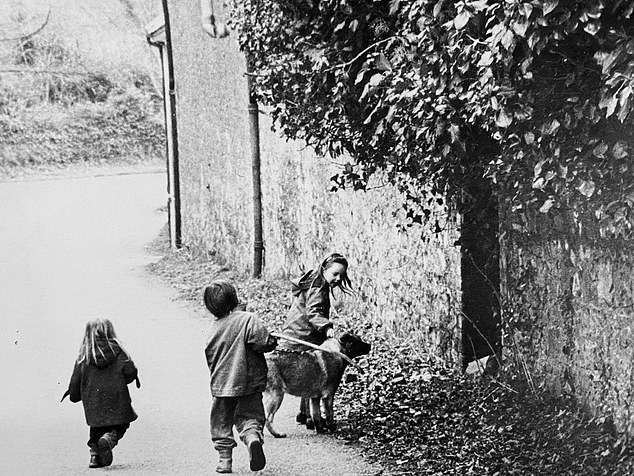 Mariella, age seven, with her siblings Danielle and Aksel at her home in Ireland. She lived there until the age of nine or ten

There was a terrible period after my mom and dad broke up when we had no money at all. There was nothing to eat and the cupboard was bare.

Trying to be helpful, my brother took out an old packet of spaghetti and a can of golden syrup and said, “This is going to be fun.” It really wasn’t.

In 1971, Northern Ireland introduced internment without trial. By this time my mother was involved with my stepfather, who was attached to the IRA and would sleep in his boots and combat clothes.

The garden was our secret world. We’d come home from school and run amok

He had set up a rope ladder to escape. No one came to get him and we thought he was ridiculous.

I do remember several men arriving at the house in the middle of the night, fleeing an internment camp in the north. It was all a bit crazy.

When my father was away, I went to his study where everything remained as it was: his books, his ashtray, his wine. Everything smelled of him and I sat in his chair imagining he was home.

I didn’t get along with my stepfather and ended up living with my father in Dublin. He was an alcoholic and died at age 44 when I was 15.

I left school before my 16th birthday, went to London, moved into a squat, worked as a waitress and then for the Rolling Stones’ mobile recording studio. Another life had begun.

My parents were very loving in their own way, and I’m sure the only reason I didn’t completely fall apart when I went to London was that they gave us a strong sense of self-worth. They made us feel, ‘Yes, I am a good person.’

New York City health chiefs are blasted for last-minute and…

Three in four American teens don’t get enough exercise every…