Melrose Place star Brad Johnson died of coronavirus in February aged 62, his heartbroken family has revealed – as they paid tribute to a ‘true Renaissance man’.

The actor, who also featured in Steven Spileberg’s hit drama Always, passed away due to pneumonia he contracted while fighting the deadly virus.

He died on February 18 in Fort Worth in Texas following his battle with Covid, his representative Linda McAlister announced.

His family released a heartbroken statement on Thursday night, remembering a man who ‘lived life to the fullest’ but ‘was taken too early’.

Johnson rocketed to fame in his role as Dr Dominick O’Malley in the hit Fox drama Melrose Place, which he starred on in 1996.

The actor had stayed away from films over the last few years but had been planning a comeback in the Western Treasure Valley before it was shut down due to the writer and star of the film Jay Pickett’s death.

Brad Johnson, an actor who played a supporting role in the hit Steven Spileberg drama Always, has died at the age of 62 due to complications from Covid. Pictured: The actor and a horse in a photo released by his family ahead of his funeral in February 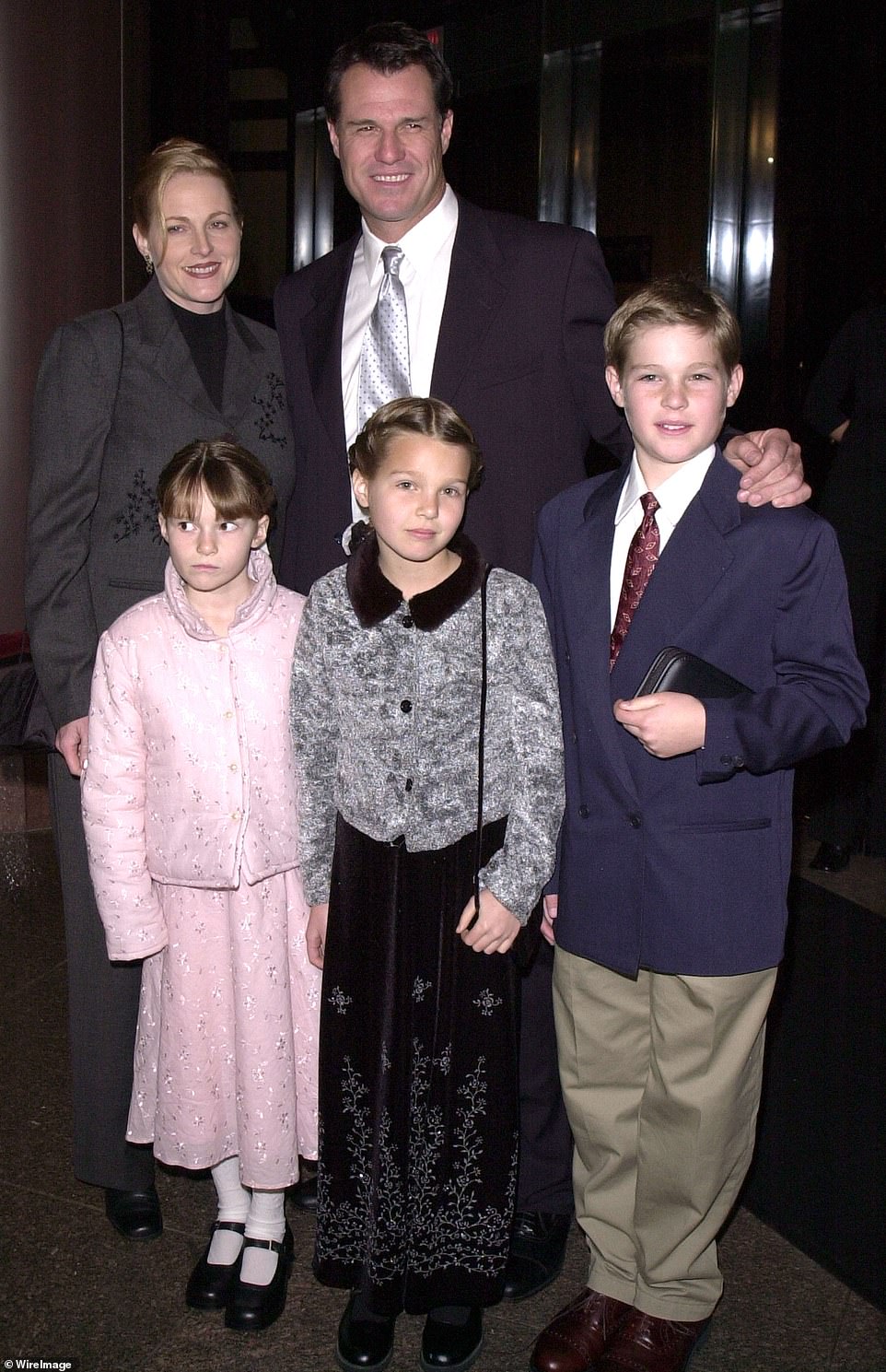 Johnson and his family are pictured at the Los Angeles premiere of the Kirk Cameron-starring religious film Left Behind in 2000. The film spawned two sequels 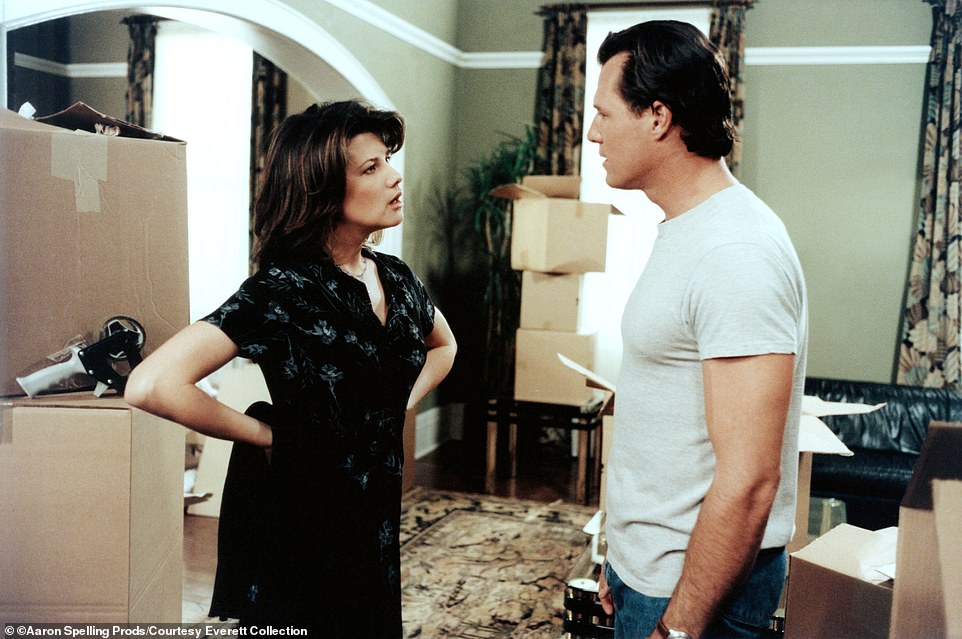 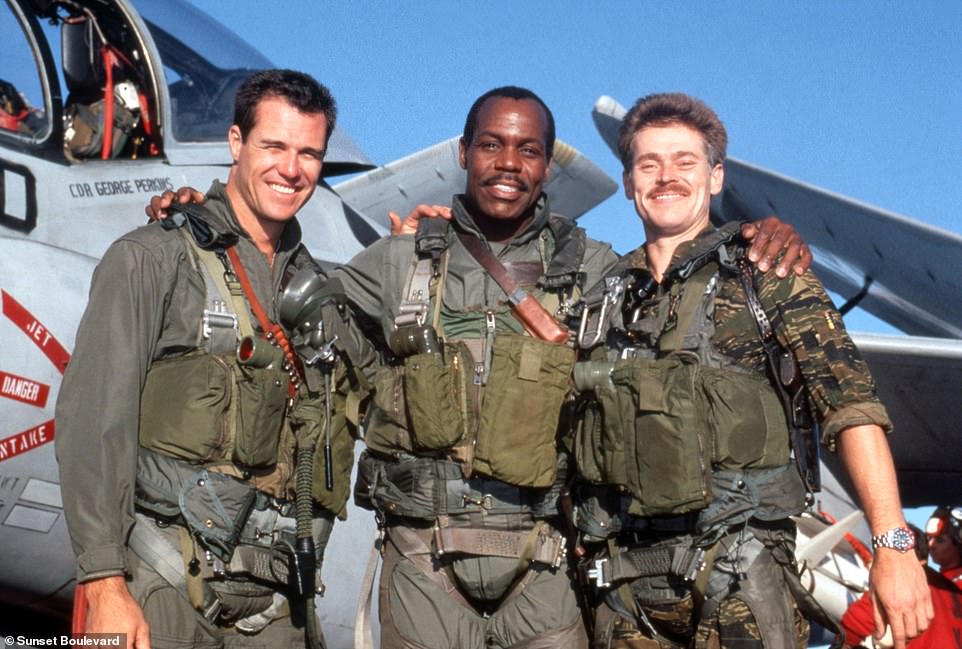 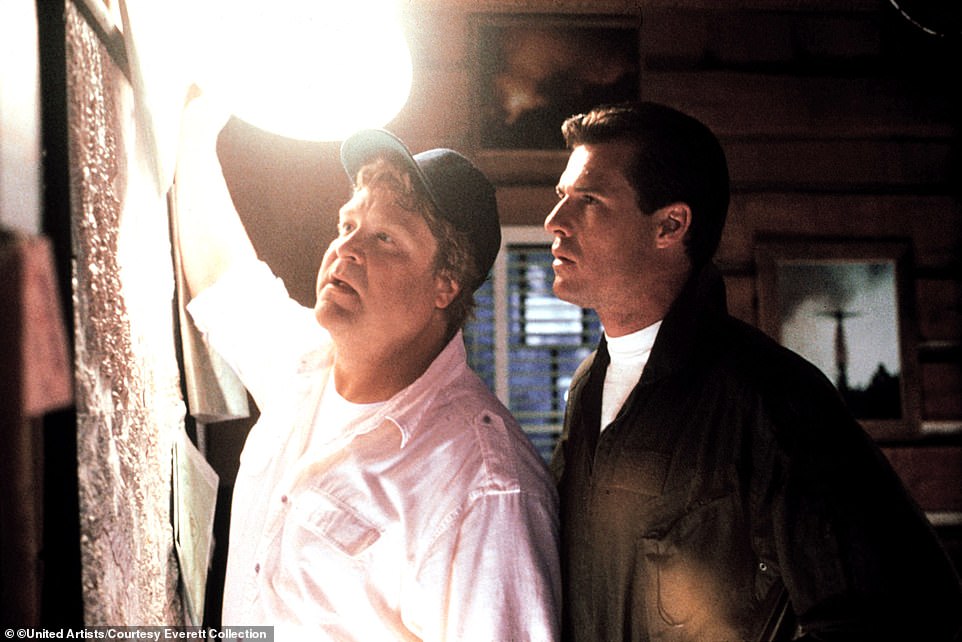 Johnson, seen here with John Goodman on the set of Steven Spielberg’s 1989 hit Always in which he played Ted Baker 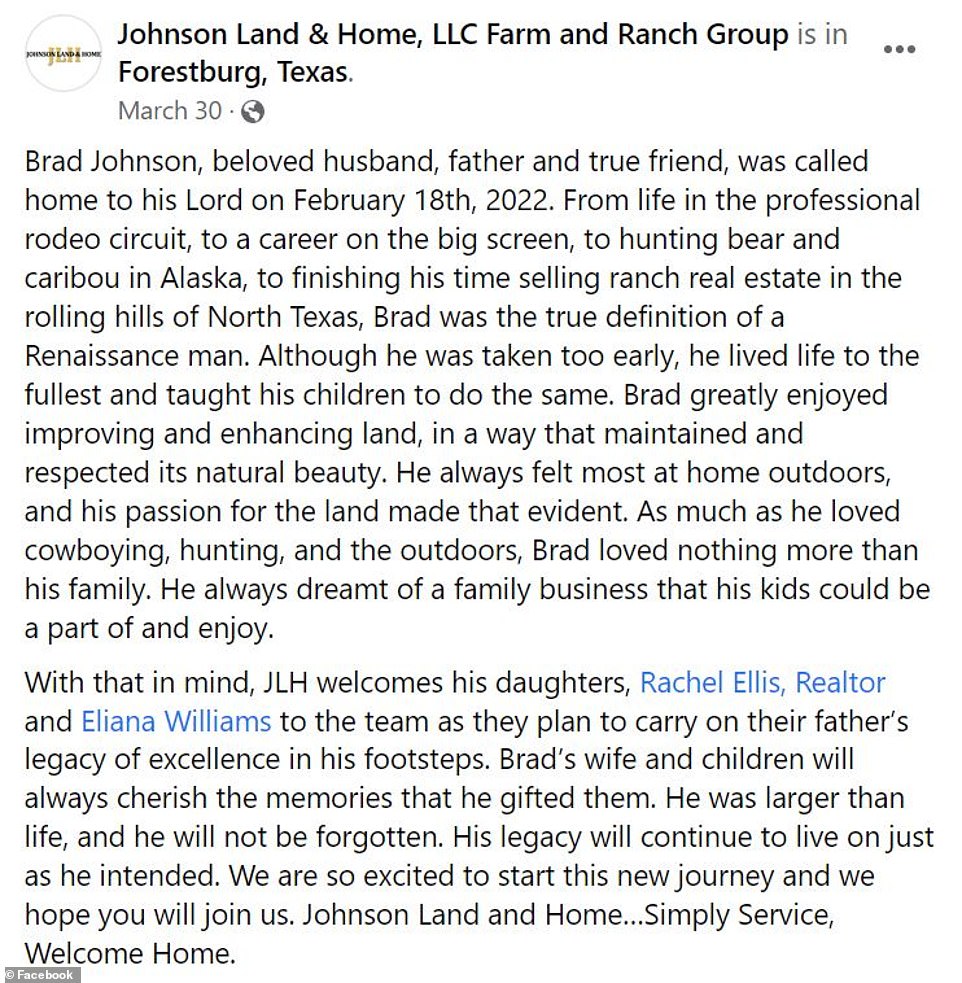 Johnson’s family business posted this tribute to him on Facebook in March. Away from acting, he built a hunting lodge in New Mexico, according to The Hollywood Reporter, and also worked restoring old rifles and selling ranch real estate in North Texas

‘He was a true renaissance man,’ his family wrote in an obituary published in March. ‘He was not only interested in all life had to offer, but was gifted in it as well.’

‘Although he was taken too early, he lived life to the fullest. He was larger than life. Brad was loved by many and loved people back, a genuine friend, trusted colleague, and a dedicated husband and father, he will never be forgotten, and his legacy will go on.’

The onetime rodeo cowboy got his big break portraying the famous ‘Marlboro Man’ cigarette mascot in the mid-80s, which brought him to Spielberg’s attention. He was in People’s ‘Most Beautiful’ issue in 1990.

Some of his other prominent roles include a recurring part on CSI, the Kirk Cameron-starring religious trilogy Left Behind as Captain Rayford Steele and the syndicated TV series Soldier of Fortune, Inc.

The most recent role cited on his IMDb page is a 2015 cowboy film called Nail 32.

Johnson was born on October 24, 1959 in Tucson, Arizona to a horse trader father.

In 1984, Johnson worked as a professional rodeo cowboy before becoming a pitchman for Marlboro cigarettes and Calvin Klein.

He quit rodeo after injuring his knee in 1986 and in that same year, having been recruited by a movie scout which led to the beginning of his acting career.

The former cowboy’s TV break came with a guest spot on the CBS megahit Dallas and worked in films like 1989’s Nam Angels before being cast in Spielberg’s hit Always with Richard Dreyfuss, Holly Hunter, John Goodman and Audrey Hepburn in her final film role.

Johnson has largely been inactive in films and TV in recent years but has stayed busy in other pursuits.

He built a hunting lodge in New Mexico, according to The Hollywood Reporter, and also worked restoring old rifles and selling ranch real estate in North Texas.

His family noted that his restoration work had been displayed worldwide and he’d become known as a master crafstman.

‘[Johnson] always felt most at home outdoors, and his passion for hunting made that evident,’ his family said. The business, Johnson Land & Home, will be taken over by two of his daughters.

Johnson spoke to People about his interests outside acting in a 1990 interview. ‘If things work out in Hollywood, great,’ he said.

‘But if something happens that I don’t like, adios. It’s kind of like my dad says: You only go this way once, and if you do it right, then once is enough.’ 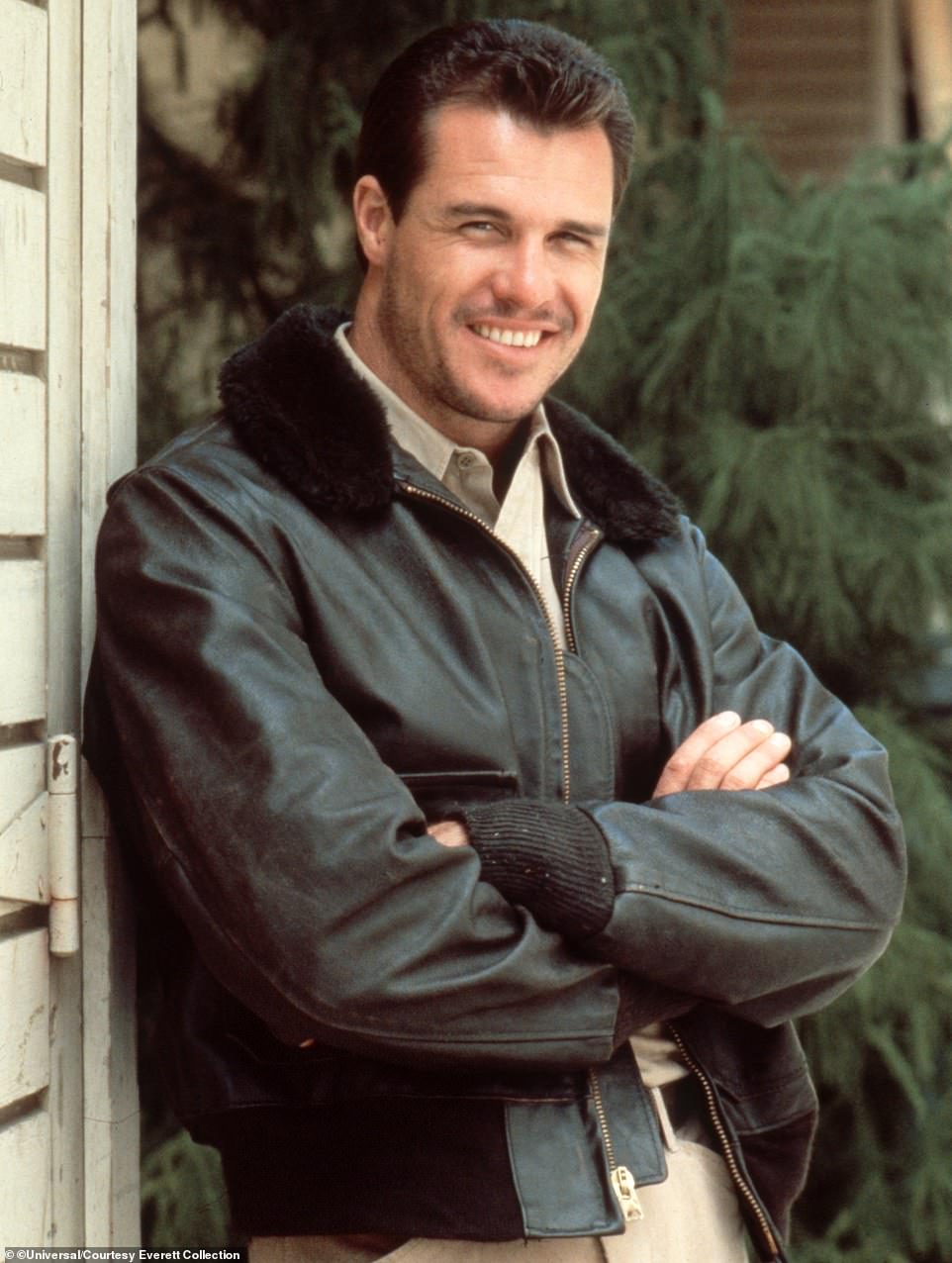 Johnson – seen here in 1989 – died on February 18 in Fort Worth, Texas , his representative Linda McAlister told The Hollywood Reporter 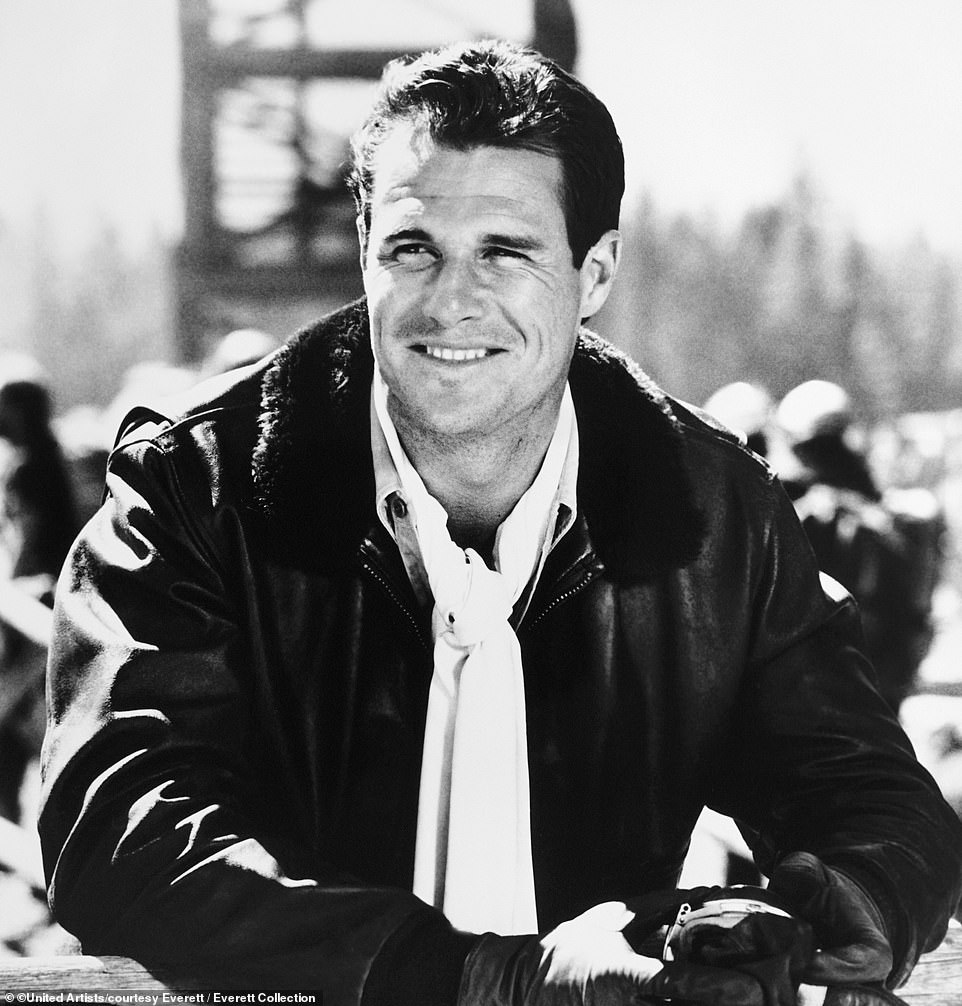 Johnson, pictured in black and white on the set of his first big film, 1991’s Always directed by Steven Spielberg 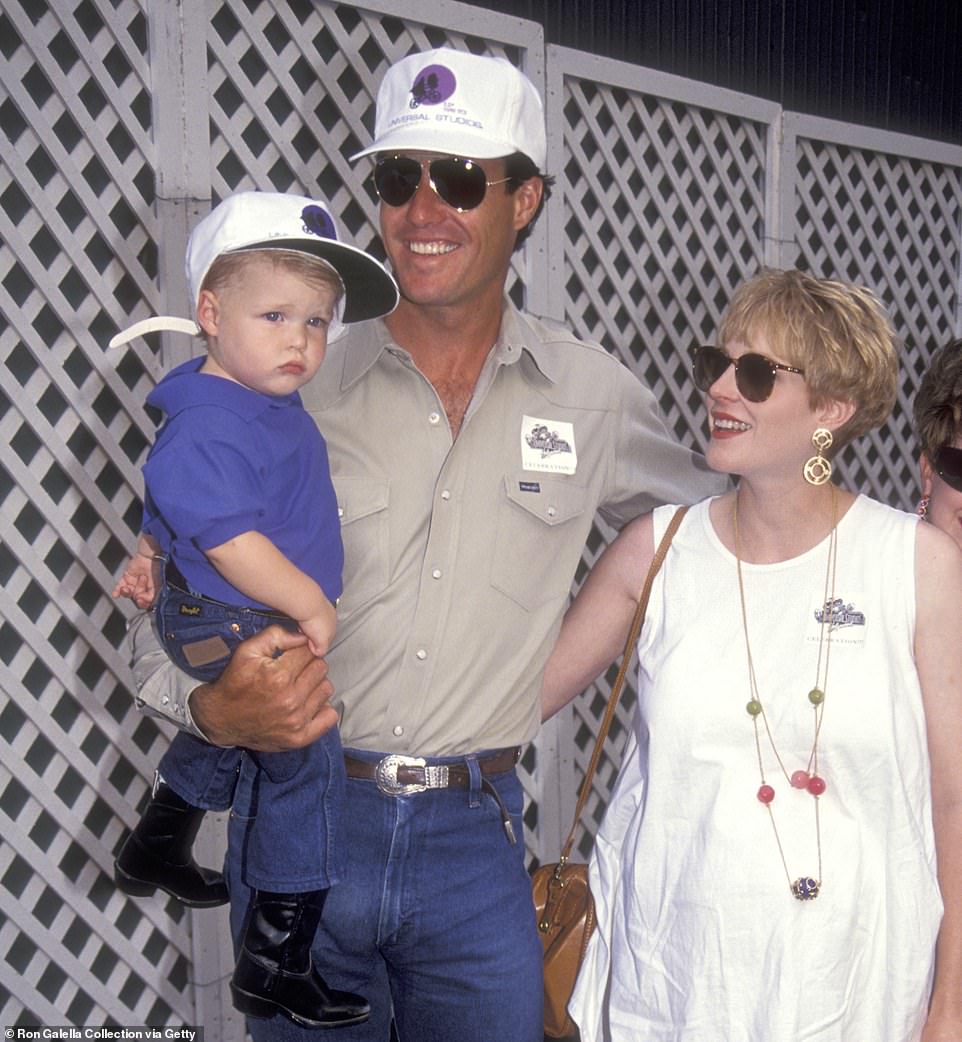 Brad Johnson with wife Laurie and son Shane as they attend the Grand Opening of the New Universal Studios Theme Park Ride – E.T. Adventure in California in 1991 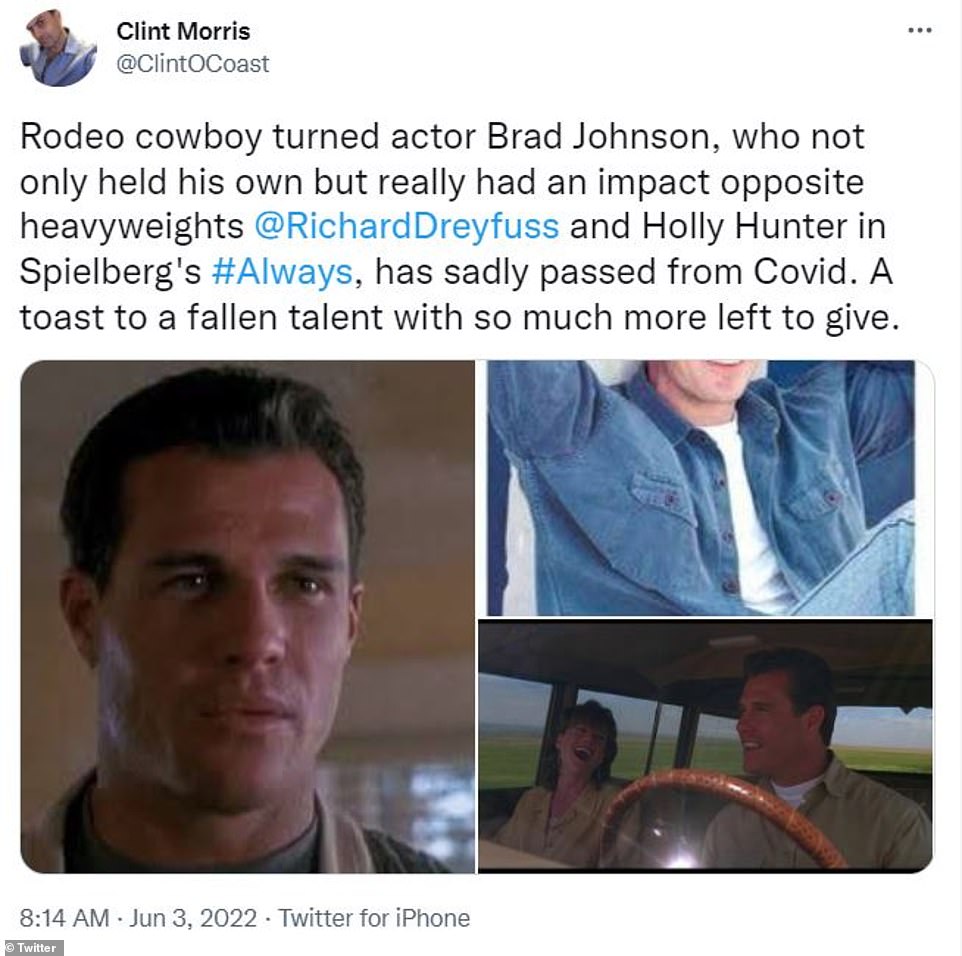 He is survived by his wife of 35 years, Laurie, and their children, Shane, Bellamy, Rachel, Eliana, Eden, Rebekah, Annabeth and William, as well as three grandchildren and his stepmother.

The rodeo was where Johnson and Laurie met in Dallas.

‘Brad loved nothing more than his family,’ his obituary reads. ‘He put them before himself in every way and they know that they could not have been blessed with a better husband and father.’

Johnson was buried at Perryman Cemetery in Forestburg, Texas.

Brad William Johnson, beloved husband, father and cowboy, was called home to his Lord on February 18th, 2022. A graveside service will be held at Perryman Cemetery, February 27th at 2:00 pm. Anyone who knew Brad knows how difficult it is to sum up the details of his life on a single page.

Born to Grove and Virginia Johnson on October 24th, 1959 in Tucson Arizona, Brad was a true renaissance man. He was not only interested in all life had to offer, but was gifted in it as well.

Although he was taken too early, he lived life to the fullest. The son of a horse trainer, Brad grew up with a passion and love for the outdoors, and his younger years would see him hunting and competing in rodeo whenever he had the chance.

Brad started his professional rodeo career in 1984, and the circuit would lead him to Dallas, Texas, where he would meet the love of his life, Laurie. They married October 11th, 1986, and were married for 35 very full years.

While on the professional rodeo circuit, Brad was recruited by a movie scout which led to the beginning of his acting career.

Prolific, he would appear in many commercials, magazines, films, and television shows, and became the face of Marlboro for a few years as the Marlboro Man.

This brought the Johnson family to California. A few years later, his love for the outdoors would lead Brad and the family to purchase and move to a ranch in rural New Mexico.

Brad greatly enjoyed improving and enhancing land, in a way that maintained and respected its natural beauty. After building a beautiful hunting lodge in New Mexico, Brad saw great success and enjoyment from guiding hunts while raising his growing family with his wife. He always felt most at home outdoors, and his passion for hunting made that evident.

A man of many talents, Brad also filled his days restoring Model 1886 Winchester Rifles. For this he would come to be recognized as a master craftsman, as his rifles are showcased and cherished worldwide.

As much as he loved cowboying and the outdoors, Brad loved nothing more than his family. He put them before himself in every way and they know that they could not have been blessed with a better husband and father.

From life in the professional rodeo circuit, to a career on the big screen, to hunting bear and caribou in Alaska, to finishing his time selling ranch real estate in the rolling hills of North Texas that he loved, Brad truly seized and embraced all different paths of life.

His wife and children will always cherish the memories that he gifted to them. He was larger than life. Brad was loved by many and loved people back, a genuine friend, trusted colleague, and a dedicated husband and father, he will never be forgotten, and his legacy will go on.

Brad is preceeded in death by his parents Grove and Virginia Johnson and his sister Beth and is survived by his wife, Laurie, his eldest son Shane Johnson, his daughters; Bellamy and husband Brian Olomon and their 3 children, Rachel and her husband Layne Ellis, Eliana and her husband Jordan Williams, Eden and her husband Dylan Gressett who are expecting their first child, Rebekah Johnson, Annabeth Johnson, and his youngest son William Johnson. He is also survived by his step mother Teresa Johnson.

‘He taught his sons to be men, and his daughters to accept no less’

‘Do right and fear no man’