RMT boss Mick Lynch split the Question Time audience last night as he was booed over the ‘Spanish practice’ of maintenance teams only operating at certain stations.

The union leader, who has led 50,000 rail workers on strike this week, causing travel chaos in the process, was berated by one audience member over what they saw as his ‘Victorian attitude’.

It came after host Fiona Bruce confirmed that crews operating at stations as little as five minutes apart are not allowed to work at the other station, a policy Network Rail CEO Andrew Haines wants to scrap.

However, another member of the audience, who said he was a rail worker who has been on the picket line this week, rushed to his defence, saying the franchise system of rail operators was actually to blame.

In a fiery show, which was held last night in Stratford-upon-Avon in Warwickshire, Mr Lynch divided opinion among the audience, with some showing support for the pickets and others coming out against the strikes.

It came amid strikes by Mr Lynch’s RMT union, which is calling for better pay, improved working conditions and guarantees of no compulsory redundancies. 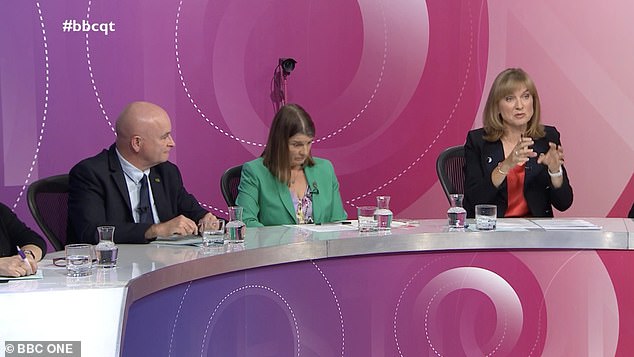 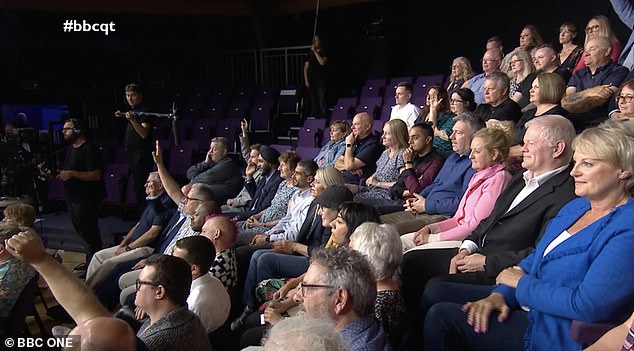 It also came the same day that British Airways staff voted to go on strike during the summer holidays after rejecting a 10 per cent pay offer, as the potential for a ‘Summer of discontent’ marred by strikes grows.

In one section of the programme last night Ms Bruce quizzed Mr Lynch over maintenance crews and how they operate.

Speaking to Mr Lynch, she said: ‘Network Rail Chief Executive Andrew Haines has said one of the things he wants to change and that you’re not allowing is that maintenance teams are responsible for geographical areas.

‘So for example, if you have a maintenance team who are Kings Cross Station, they are not allowed to go to Euston Station which is just a five minute walk. Is that right?’

The union boss replied ‘it’s right because they are two different regions’, prompting groans from the audience, with Ms Bruce saying ‘but they’re five minutes walk away?’

He went on to say: ‘The regions of the railway were constructed by private companies and the assets and equipment on them are entirely different on each region.’

‘We have digital timesheets and manual timesheets, you wouldn’t be surprised that if you’re out on the ballast in Inverness on a February you may not have a computer with you.’ 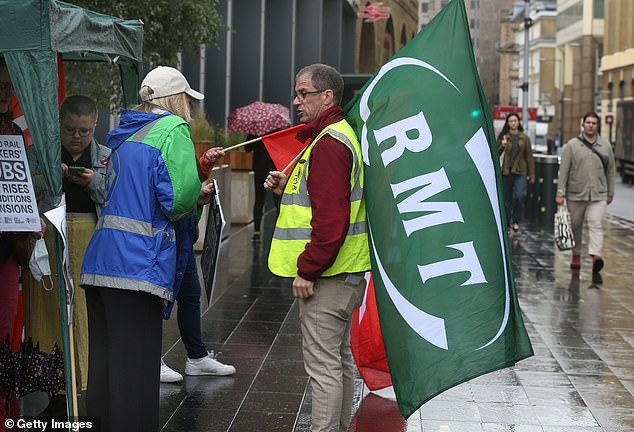 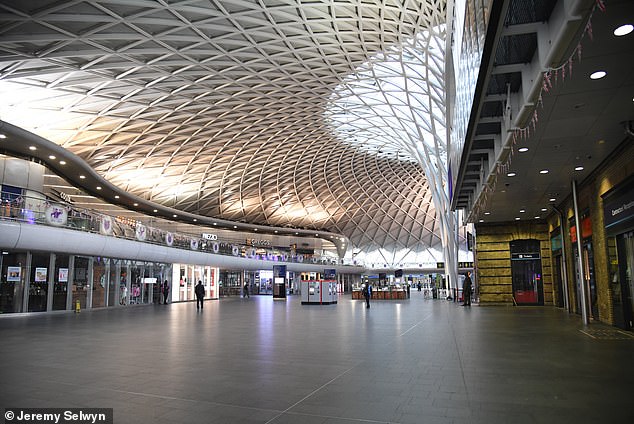 This prompted an angry outburst from one member of the audience, who was applauded by some in the crowd for saying: ‘Mick that just doesn’t fly, that’s an absolutely Victorian attitude.’

‘I employ 35 people, we have to change with what the customer demands.’

Mr Lynch attempted to respond saying ‘so do we (respond to customer demands)’, but this was rebutted by the audience member who said: ‘You clearly don’t Mick because you’ve got people in Charing Cross unable to maintain Victoria, it’s a ludicrous situation.

What train services will run on Friday after the latest strike?

How many trains will run on Friday?

Only around 60% of the 20,000 normal weekday services will be able to operate.

Why are timetables not returning to normal on Friday if there is no strike?

Walkouts by signallers and control room staff who would usually have worked overnight from Thursday night into Friday morning mean trains will leave depots later than normal, delaying the start of services.

Between around 3am and 4am.

Between around 5am and 6am.

How will that change on Friday?

The process of taking trains out of depots will only begin when signallers on daytime shifts start work at 6am-6.30am.

How long will the start of services be delayed?

It is expected to take up to four hours in some locations.

How quickly will services ramp up?

In London, services will increase quickly as trains do not have to travel long distances from depots to stations. It will take several hours in remote locations.

Will services eventually return to normal on Friday?

Network Rail said that ‘even during the day the service will stay thinner’ than usual and some operators will wind down services slightly earlier than normal.

It will be a similar picture to the other strike days on Tuesday and Thursday. Around 20% of services will run and just half of lines will be open, and only between 7.30am and 6.30pm.

Is there any chance that strikes planned for Saturday will be called off?

Negotiations are ongoing but passengers are still urged to check with train operators for updates to services.

‘You will be the death of the railways. Look at railways now, utterly hopeless, terrible places to travel in, you’ve got customers crashing out left and right, you’ve had a 20 per cent fall since the pandemic and you’re still demanding more.

However, a railway worker and RMT union member who was in the audience leaped to Mr Lynch’s defence, blaming the franchise system.

‘My issue is, the reason it’s so fragmented is because of the franchise system, there 15 or 16 and Network Rail, how are they supposed to communicate?’ he said.  I

‘If it was nationalised all under one banner then you can do those things, but you can’t do it.

‘It’s like going into Sainsbury’s and doing something at Asda. You can’t do it, and that’s the way the franchise system works.’

The franchise system refers to the private companies which operate trains on British railways.

At the moment there are 17 different franchises in Great Britain, with Network Rail responsible for maintaining the infrastructure of the railways.

All of these are run by private companies with the exception of LNER, ScotRail, Southeastern and Transport for Wales Rail, all of which are Government-run.

The walkout by RMT members is set to take place for a third day on Saturday, with Mr Lynch saying yesterday that strikers will ‘take a pause next week and consider everything’ next week.

The union boss ominously predicted that managers and train drivers would join the strike soon, telling Sky News the situation ‘is going to escalate’.

He said: ‘There are other people that are balloting in this industry, the TSSA, the managers’ union, which shows you where the situation is, if the managers are going to go on strike and then we might have more drivers coming into the dispute through separate ballots.’

And airports, which have already faced delays and cancellations due to staff shortages in recent weeks, could be impacted after BA workers voted to go on strike yesterday.

It is the latest pay dispute threatening to disrupt Britain as workers, the majority of them in the public sector, demand pay rises in line with surging 9.1% inflation caused by the Government’s massive Covid bailouts and Putin’s war in Ukraine.

The earliest date the strikes could happen is early July, but the unions have not announced a timescale, possibly in the hopes of pressuring BA bosses to cave in.

GMB and Unite unions have blamed ‘pig-headed’ aviation bosses for the dispute by imposing mass layoffs during the pandemic, while airlines were struggling.

BA said that the unions had rejected a 10 per cent pay offer in favour of walkouts as early as next month, potentially during the school holidays.

However, union barons claim the airline’s offer was a one-time ‘bonus’ and its members want a full-time raise. 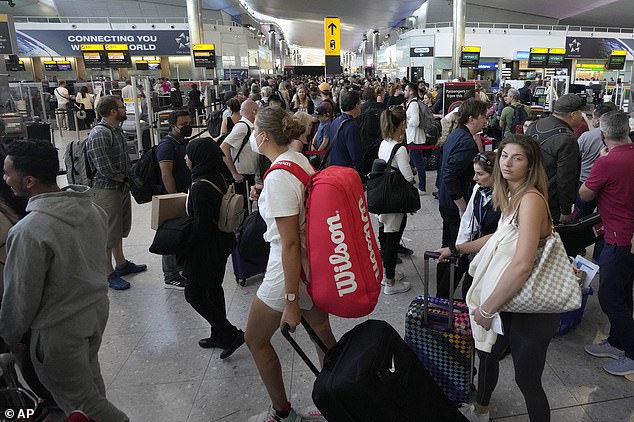 Travellers queue at security at Heathrow Airport in London, Wednesday, June 22, 2022. British Airways workers at the airport are set to go on strike as early as next month

Who else is set to join Britain’s summer strike contagion?

Strikes could spread across the economy in the coming months. These are the areas affected – and those which could be hit – and the unions behind the ballots.

Britain’s entire rail network will will be paralysed again on Saturday when more than 50,000 RMT members will go on strike.

The Transport Salaried Staffs’ Association (TSSA) is also balloting thousands of staff at Network Rail and several train companies, with the possibility of strikes as soon as July 27.

The train drivers’ union Aslef is set to strike at Greater Anglia and the Croydon Tramlink in the coming weeks.

Teachers’ union NAS/UWT will ballot members over action unless the Government backs demands for a 12 per cent pay rise. A pay award for 2022/23 is due in November.

The National Education Union has said it will ballot its 460,000 members if a pay rise in line with inflation is not offered by the Government.

Unison, which represents NHS staff, has said strikes are possible unless the annual pay offer for them is not close to the rate of inflation. The British Medical Association, which represents doctors, has also said it will prepare for a ballot unless junior doctors are given a 22 per cent ‘restorative’ pay rise.

The Royal College of Nursing has also demanded a pay rise of 5 per cent above inflation.

The Public and Commercial Services Union, which represents civil service workers, will hold a ballot in September over pay, pensions and redundancies.

The Unison, GMB and Unite unions have said local government staff in England, Wales and Northern Ireland should receive a pay increase of at least £2,000 each. Workers include rubbish collectors, library staff, teaching assistants and care workers.

Unite said it will support ‘any action’ by workers to achieve a pay rise.

The Criminal Bar Association (CBA), which represents barristers in England and Wales, said several days of court walkouts will begin from next week.

The promised industrial action, announced on Monday following a ballot of members, comes at a time of significant backlogs across the court system.

The Communication Workers Union will ballot Royal Mail workers in a dispute over a pay rise offer of 2 per cent.

The union has also sent ballot papers to BT workers including engineers, contact centre staff and retail employees over pay. It could result in the first strike at the company since it was privatised in the mid-1980s.

For some commuters hit by rising fuel costs and rail strikes, it is the glimmer of a silver lining.

This month traffic wardens will start a seven-day strike in protest at pay cuts and ‘fire and rehire’ tactics.

The walkout in Wiltshire means penalty charge notices will not be issued and charges in council car parks will not be enforced, costing £30,000 in revenue.