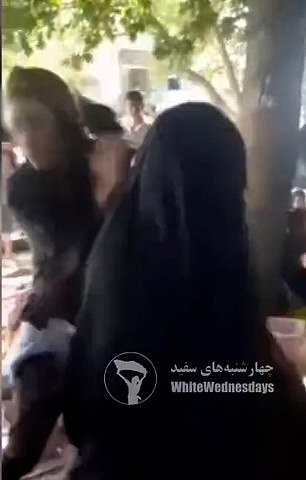 This is the shocking moment when a pregnant Iranian woman is pushed to the floor for dancing and not wearing a hijab.

Video shows the pregnant woman dancing in front of onlookers at a gathering before a hijab woman pushes her to the floor – causing the victim to fall on top of a seated child.

But the pregnant woman fights back and punches the attacker in the face in front of a crowd of shocked onlookers.

The angry woman wearing the hijab punches the victim repeatedly, leading to cheers from the onlookers. 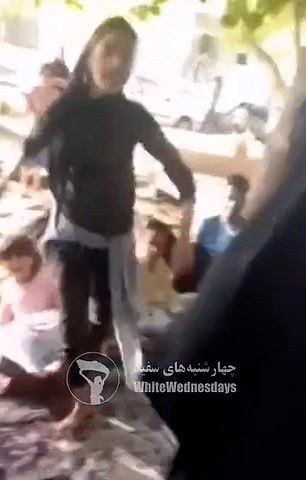 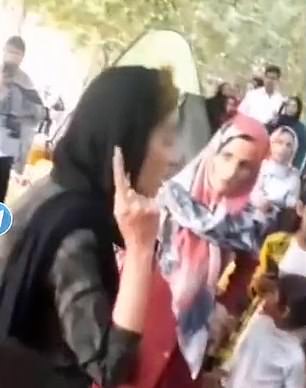 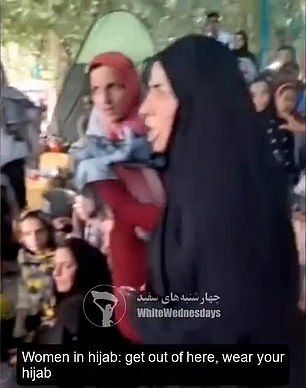 The pregnant woman, after being beaten three times, yells, “Why are you hitting me?”

The attacker responds: ‘Go away, wear your headscarf. You have to respect the hijab.’

The victim confronts the woman and says, “You know what? I’m pregnant and unfortunately I can’t defend myself at the moment.’

The attacker then yells “Put your headscarf on” in front of the crowd.

It is not known exactly when or where in Iran the footage was taken, but it was shared on Twitter by Masih Alinejad – an Iranian women’s rights activist who currently lives in the US and described the attack. as ‘shocking, bitter and painful’.

Alinejad said: ‘Why would this pregnant woman be so brutally attacked by an intimidating woman because of the hijab and so many people are just bystanders?

“Silence to bullies is not only suppression, but also encouraging the oppressor to repeat the bullying.” 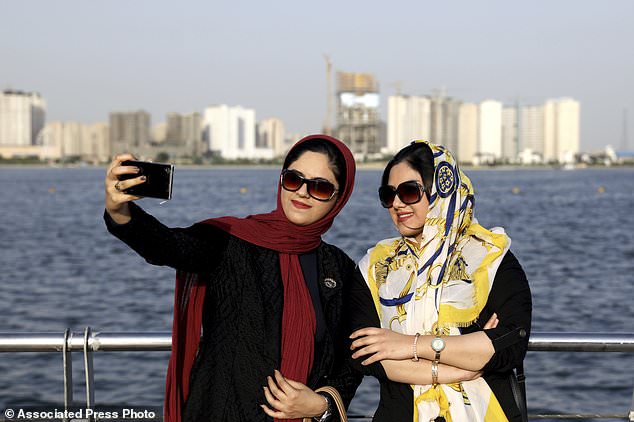 Iranian women take a selfie around Lake Martyrs in the Persian Gulf, west of the capital Tehran

She said in a later tweet: “This pregnant woman was beaten up by a pro-hijab woman for wearing ‘inappropriate hijab’ and dancing.

“In my country Iran, the laws allow people to warn women against not complying with the hijab laws. The regime hired 7,000 undercover agents in Tehran alone to stop unveiled women.’

Iran, like many countries in the Middle East, enforces laws about what women and girls 13 and older can wear in public, with an emphasis on “modesty.”

Women in Iran are required to wear a headscarf, cover their arms and legs, and not wear clothes that are deemed too colorful or form-fitting.

The laws stem from comments made by Ayatollah Ruhollah Khomeini after the 1979 Islamic Revolution.

Former President Hassan Rouhani, who came to power in 2013 and promised a more moderate stance, previously said it is not the job of the police to enforce religious rules, such as those requiring women to cover their hair.

But in April 2016, officials said there were 7,000 undercover morality police reports on things like “bad hijab” — a generic term that usually refers to women’s un-Islamic attire.

And after Rouhani’s ouster earlier this year and the election of hardliner Ebrahim Raisi, it appears that the rules are being enforced more strictly.

Human rights activists warned when Raisi came to power that his election was intended to send a message from Iran’s rulers to the population that dissent would no longer be tolerated.

Last week, Iranian authorities arrested the organizers of a skateboarding event in the southern city of Shiraz after videos surfaced of teenage girls at the event not wearing a hijab.

“This video shows that, like young people everywhere, Iranian young people want to hang out with their friends and have fun on the weekends,” said Holly Dagres, a non-resident senior fellow at the Washington-based think tank, the Atlantic Council, which has a area has target Iran.

“The Islamic Republic is in a real conundrum with the geriatric clerics at the top disconnected from some of the realities on the ground and struggling to reach this young generation of Iranians who are looking beyond their religious ruse.”

There have been a number of cases of women in Iran being beaten for not wearing a hijab.

In 2019, an Iranian woman was dragged across the street and beaten while the crowd cheered for dancing and not wearing a hijab.

The woman was seen being booed in the median strip of a busy road by men in the town of Rasht, on the Caspian Sea coast of Iran. 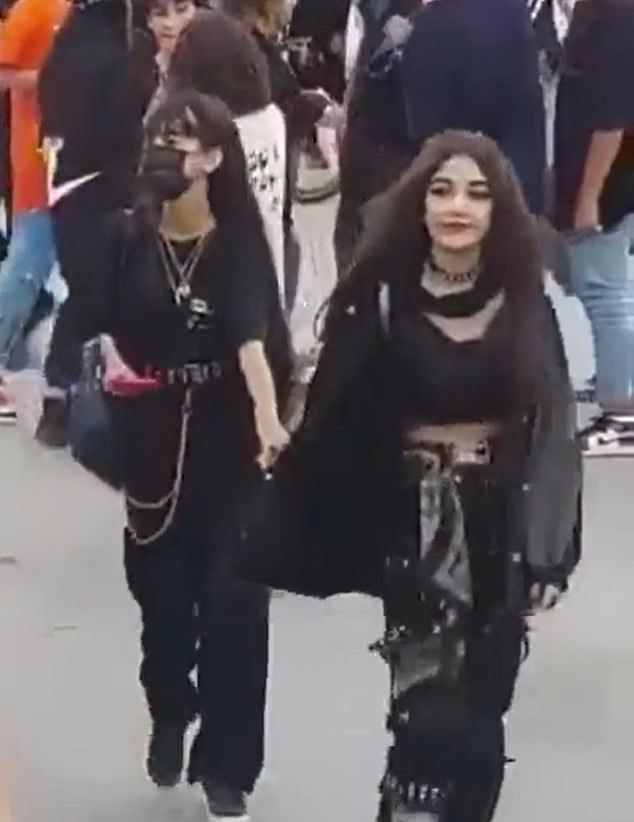 The ‘Go Skateboarding Day’ event in Shiraz, Iran, sparked outrage among conservative religious authorities over teens who interacted freely and teenage girls who did not wear headscarves 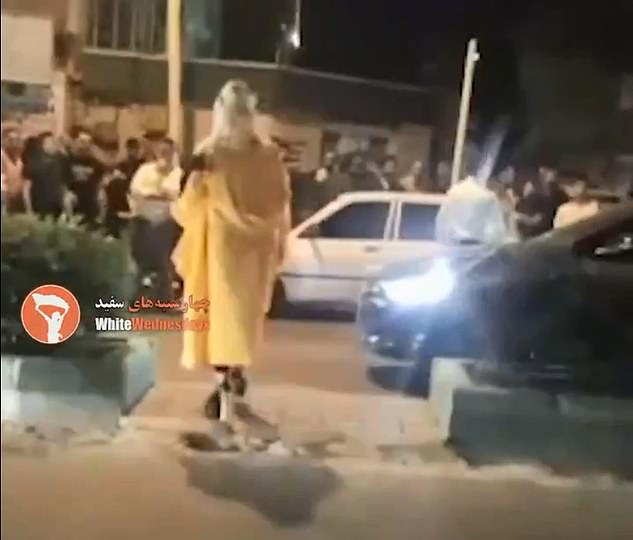 The woman is seen confronting the crowd of men as she stands in the median strip of a busy street in the city of Rasht, Iran 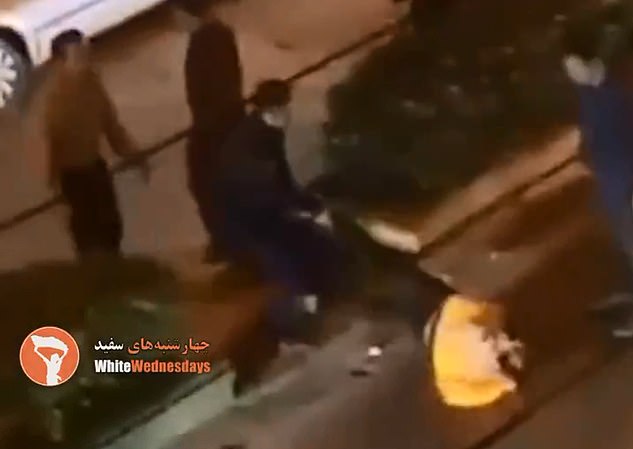 A crowd appeared to be at a standstill with the woman before a few men approached her, with one grabbing her by the head and forcing her to the ground.

He then grabbed her ankles and dragged her brutally across the tarmac, provoking huge cheers from the crowd of men.

In 2020, an Iranian undercover morality officer spat at teenage girls and asked them ‘where is your dirty boss?’ after seeing them without hijab.

In a shocking video circulating on social media, a man stops his car and gets out before assaulting the youths.

During the heated argument on the side of the road in Kermanshah, Iran, he says to the girls “I’ll f*** your mother” and claims their behavior is “immoral” while a police officer seems to have nothing to do with the incident. to do . 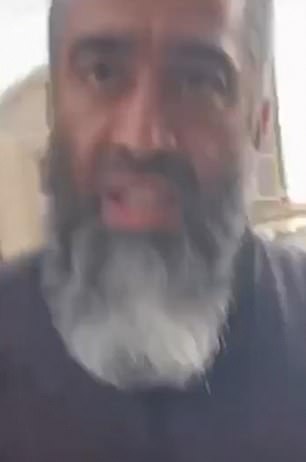 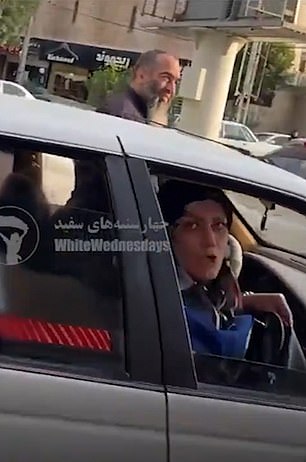 The morality officer gets out of his car on the side of the road and he and his wife start yelling at the teenagers for not wearing hijabs in Kermanshah, Iran

The video shows that as tensions mount between the man and the teens, the man’s wife gets out of the car and says “apologies to my husband, so he doesn’t hit you.”

The woman tells them that her husband is from the intelligence services and can have them arrested.

After the man spits in the girls’ faces, another woman in a hijab pushes him.

Shortly after, a police car arrives, but the officer watches from a distance and the teenagers yell, “Officer, why don’t you do something?”

US special forces conducted midnight raid on Syria that…

Premier League players will kneel this weekend to support…

US special forces conducted midnight raid on Syria that…

Premier League players will kneel this…