More than 45,000 Americans have applied to sponsor Ukrainian refugees to live with them within a month

More than 45,000 Americans have applied to sponsor Ukrainian refugees to live with them in the US’s largest asylum-seeking program in decades.

Just over 6,500 displaced Ukrainians arrived in the US on Wednesday, June 1, under the Uniting for Ukraine program launched on April 25.

And now the Department of Homeland Security has revealed that an additional 27,000 Ukrainians have been granted permission to travel to America by immigration officials.

According to the UN, the Biden administration announced on March 24 that it will host 100,000 refugees fleeing the war in Ukraine. More than 14 million people have fled their homes since the Russian invasion of Ukraine.

Another six million have left for neighboring countries, while eight million are internally displaced in Ukraine.

And according to data shared with CBS Newsthe program could enable the US to host more than half of the 100,000 refugees from Ukraine that President Biden promised to welcome within the next three months.

More than 45,000 Americans have applied to sponsor Ukrainian refugees (pictured at Mexico’s Tijuana Airport) to live with them in the US’s largest asylum-seeker program in decades

In addition to welcoming more IDPs, the Biden administration also announced more than $1 billion in new funding for humanitarian aid.

The funding will provide food, shelter, clean water, medical supplies and other aid, according to the White House.

A state spokesman told CBS the Biden administration has rolled back cuts to the traditional U.S. refugee program as a private sponsorship program for all refugees is in the works to launch by the end of 2022.

The private program is different from most US citizenship and immigration programs, which require paper records and usually take months or even years to process cases.

The Uniting for Ukraine scheme is brought through the system in just weeks or even days, with approximately 300 employees trained to judge sponsorship matters.

The spokesperson added: “This will build on lessons learned from the US government’s efforts over the past year to build tailor-made private sponsorship initiatives so that Americans can play a leading role in welcoming newly arrived Afghans.” and Ukrainians.’

About 15 percent of Americans who have signed up to sponsor Ukrainian refugees, representing about 7,500 people, are from the New York metropolitan area, statistics from the Department of Homeland Security show.

Other regions with the most sponsorship applications include Chicago, Seattle, Philadelphia, Los Angeles, Miami, Washington, Sacramento, Portland, and Cleveland. 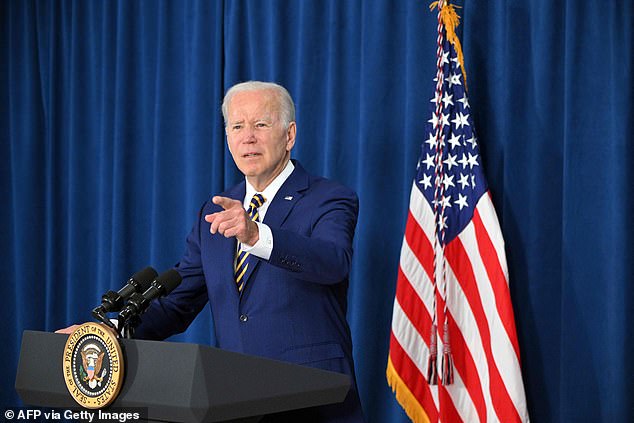 According to the UN, the Biden administration announced on March 24 that it will host 100,000 refugees fleeing the war in Ukraine. More than 14 million people have fled their homes since the Russian invasion of Ukraine. President Biden in the picture last week

Immigration policy analyst at the centrist think tank Niskanen Center said, “I think this is a great case study for what is possible if the United States government gives individuals and community groups the opportunity to step forward and directly resettle refugees.”

Early last month, First Lady Jill Biden paid a surprise visit to Ukraine where she met her Ukrainian counterpart Olena Zelensky and expressed US support for the troubled country.

Biden is the most prominent member of President Joe Biden’s administration to visit the war-torn country. She called the president from her car as her motorcade left the Ukraine to return to Slovenia, an East Wing official said.

The next day, Biden heard heartbreaking stories from Ukrainian refugees about fleeing their homeland during her visit to a Uruguay school in Bucharest, Romania, where the displaced Ukrainian children are teaching.

The 90 minute visit was filled with joy as well as sadness. Biden not only heard the terrifying stories, but also laughed with the children during their art projects, handed out presidential M&Ms and gave hugs. 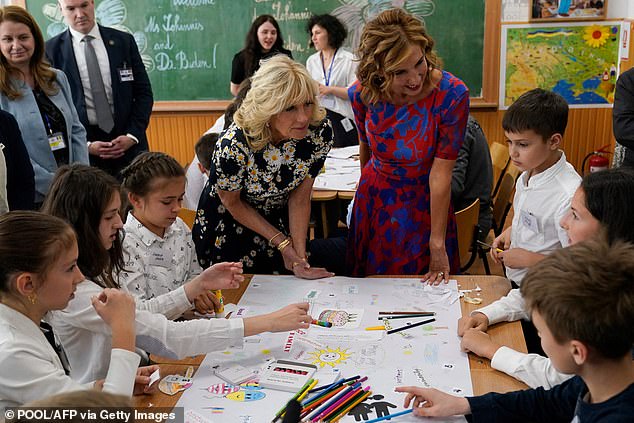 Eric Trump reveals what REALLY happened in the FBI raid

Kim Kardashian, 41, supports ex Pete Davidson, 28, who is getting therapy after their…