A mother-of-four who was an hour from death after contracting sepsis is raising awareness about the condition in pregnant and post-natal women.

Victoria Robinson, 30, from Bedford, had sepsis in November 2016 following the birth of her fourth daughter, Myla, but midwives dismissed her symptoms as exhaustion after a natural delivery.

It was only when her daughter was admitted to the baby unit with jaundice that a doctor took her symptoms seriously, and said that if another hour had passed she would have died.

Sepsis kills more people than breast, bowel and prostate cancers in the UK every year, yet many people are unsure of the signs to look out for.

Victoria (pictured here with her four daughters) was told sepsis should have destroyed her womb and that she would have needed a hysterectomy but luckily, everything was just how it should be. However, recovering mentally from sepsis was difficult and for months afterwards she experienced Post Sepsis Syndrome 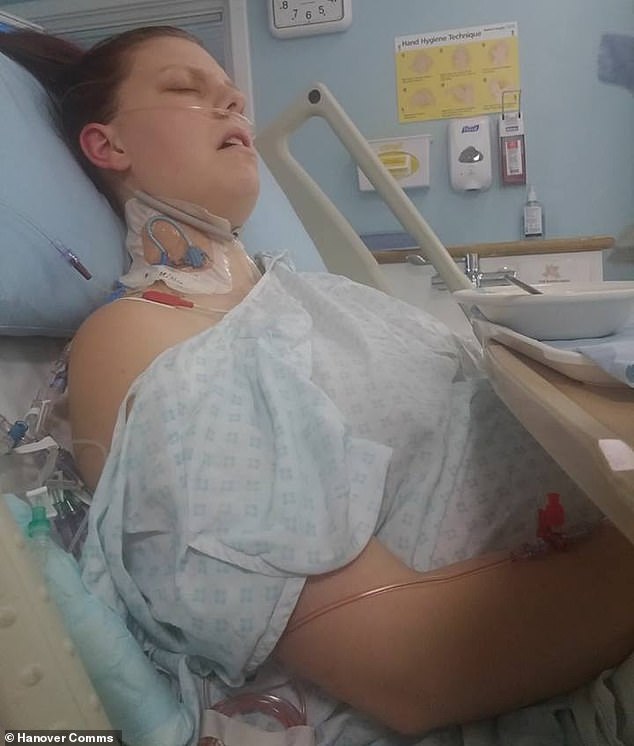 Sepsis survivor Victoria Robinson, 30, (pictured) reveals how she felt unwell during labour and was eventually

Myla was Victoria’s fourth baby, and while her pregnancy had been pretty plain sailing, towards the end she was admitted to hospital on numerous occasions due to lack of movement from the baby.

Victoria from Bedford said: ‘I went into labour two weeks before my due date, and having had three natural births previously, this time it just didn’t feel the same.

‘I felt poorly throughout the labour, my heart was racing at 160bpm and the baby’s heart-rate was even higher.

‘I was prepped for an emergency C-section, because the baby was showing signs of distress and didn’t have the energy to move down the birth canal.

‘But after intervention from the medical team, thankfully Myla Eve Michele was born safe and well.’

Myla was monitored for 24 hours for signs of infection but thankfully she was fine and htey were allowed home from hospital the next day. 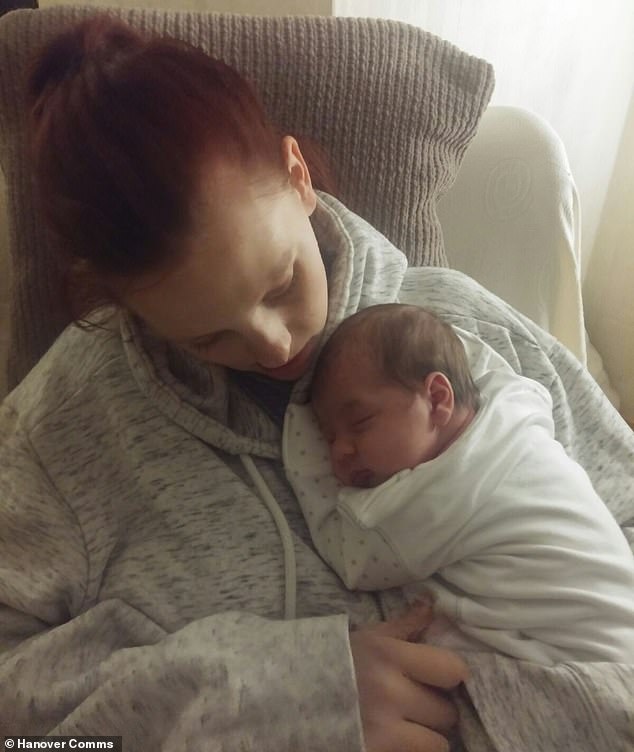 Victoria gave birth to her fourth daughter Myla (pictured) in November 2016. A few days after leaving hospital Myla was showing signs of jaundice and Victoria was experiencing extreme pain in her lower right abdomen

On day three at home, Victoria suddenly became unwell with a high temperature.

‘My body was shaking uncontrollably, I was freezing cold and I had extreme pain in my lower right abdomen,’ she recalled..

‘After a short while the shivers subsided and I began to feel okay again.’

The next day Victoria had an appointment at home with the breastfeeding nurse to help her latch the baby on because she was very lethargic and didn’t want to drink from the nipple.

Myla was also showing signs of jaundice, so it was recommended that they went back to the baby unit to have her checked and to monitor her for signs of infection again.

Victoria said: ‘It took all day for me to wash and prepare myself – I had never felt so run down and poorly.

‘As the pain in my stomach became increasingly worse, I begged my partner a few times to take Myla to the baby unit whilst I stayed home with the three older children. I ended up taking her myself thankfully, otherwise who knows what would have happened.’

When she got to the hospital, Victoria explained how she felt to the nurses and that she had taken pain relief but nothing seemed to help.

The midwives advised her that on day three to four, the pain was most likely related to breastfeeding and breast pain.

Meanwhile, Myla was admitted with jaundice, and she also had an infection in her tummy button and eye, which the midwives thought she may have contracted during labour.

Victoria, who is an SEN teaching assistant, made another attempt at telling the midwives that she felt unwell but was again reassured that she was okay.

They said that she had a baby just five days before and so her breasts were filling with milk and she was recovering from her fourth natural labour.

However, after two days in hospital Victoria was becoming increasingly unwell and was struggling to walk, eat and drink, and hadn’t urinated for a number of days.

She recalled: ‘I spent most of the time with baby Myla next to me in her crib sleeping in an upright position as I couldn’t lay down due to the extreme pain.

‘I barely had the energy to hold my newborn baby girl.’ 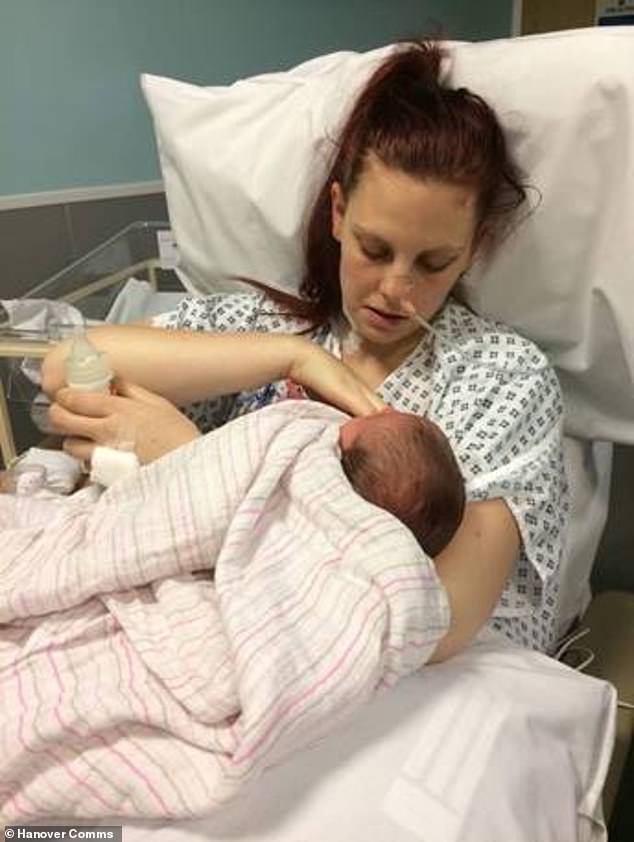 Victoria made attempts, whilst in hospital with Myla, at telling the midwives that she felt unwell but was reassured that she was okay. It was until she called for a doctor herself that her infection was diagnosed

At this point Victoria called for a doctor who spotted signs of infection immediately.

She was taking to the emergency room on the labour ward as she was struggling to breathe, and was laid flat to be checked over.

‘I had numerous doctors surrounding me, all telling me the things they were going to do to help me.

‘I had a central line inserted into my neck, nasal oxygen tubes, a catheter to help me urinate and a cannula placed into my hand.

‘I was given three loads antibiotics in case of infection, the catheter drained urine the colour of Ribena and my infection levels were sitting at 300. A healthy range is under 10.

‘I was also sent down for the first of two CT scans to understand where the pain was coming from.

‘All I remember feeling was a sense of peace, and I didn’t really understand the urgency.’

Victoria’s mum was concerned about how cold her hands and feet were because they had started to lose circulation.

The doctor told her mother that if she had left asking for help for an hour longer, she wouldn’t have survived.

Victoria was kept in ICU for a week, before a second CT scan confirmed that she had sepsis and a pelvic abscess, which she had a laparoscopic operation on to drain a litre of pus from.

By this point her kidneys had started to fail, and she was pumped with litres and litres of fluid to aid her body in its recovery.

The initial infection started in her uterus and had gone through to her stomach causing the abscess.

She was told sepsis should have destroyed her womb and that she would have needed a hysterectomy but luckily, everything was just how it should be.

Victoria spent a further seven days in the gynaecological ward, where she was seen by physios to help her walk again. 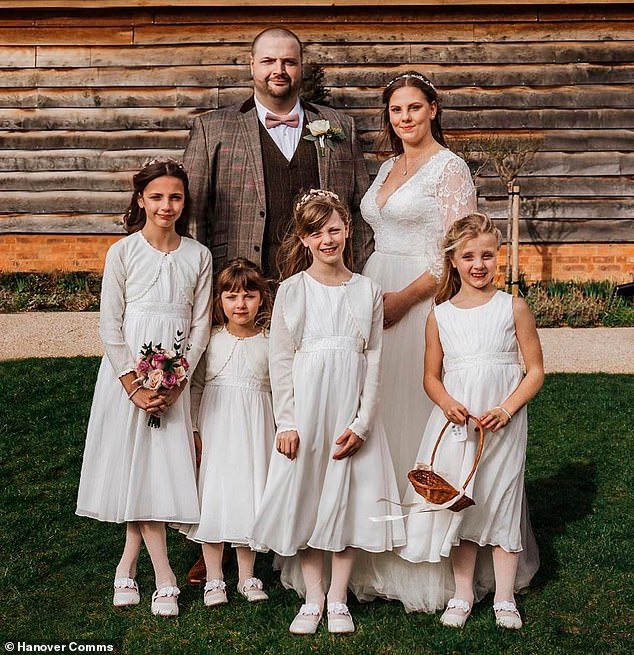 New landmark guidelines have been published, proposing significant changes in the way people with suspected sepsis are treated with antibiotics, alongside new measures to address antimicrobial resistance. Victoria (pictured here with her partner and daughters) has made a full recovery and is raising awareness about sepsis symptoms

She was also put on a special diet to gain back the 1.5st she had lost during her stay in ICU.

VIctoria also suffered hair loss, but she said the worst part was missing out on the first weeks of her daughter’s life.

She says that three years on and some of these symptoms are still around.

Victoria says: ‘Thankfully, I was able to return home to my four beautiful daughters and amazing partner.

‘Since having sepsis in 2016, I still struggle mentally on and off. As the cause of the original infection was never determined, I was sterilised in 2017 to prevent future pregnancies as advised by the gynaecologist who looked after me.

‘Throughout my labour and recovery from birth I showed so many signs of infection.

‘Signs that I missed, signs the midwives missed – signs that if I had known, I could have done something about, and maybe the sepsis wouldn’t have been as bad as it was.’

Recently, new landmark guidelines have been published, proposing significant changes in the way people with suspected sepsis are treated with antibiotics, alongside new measures to address antimicrobial resistance (AMR).

This new approach has been welcomed by the UK Sepsis Trust and Jeremy Hunt.

The guidelines encourage healthcare professionals to recognise and treat the very sickest people with sepsis immediately (within one hour) and assess and treat those who are less ill within three hours.

The extended time for investigation of those who are less sick enables medics to accurately identify the source of infection and prescribe the correct antibiotic, reducing the risk of antibiotic overuse and subsequent AMR.

This new approach could be critical to saving thousands of lives and reduce the aftereffects of sepsis.

What are the key symptoms of sepsis? The ‘silent killer’ that can cause death in minutes

Sepsis, known as the ‘silent killer’, strikes when an infection such as blood poisoning sparks a violent immune response in which the body attacks its own organs.

It is a potentially life-threatening condition, triggered by an infection or injury.  Around 245,000 people develop sepsis in the UK each year and 52,000 die, according to the UK Sepsis Trust.

Instead of attacking the invading bug, the body turns on itself, shutting down vital organs.

If caught early enough, it’s easily treated with intravenous antibiotics and fluids, but these must be given as soon as sepsis is suspected – it strikes with frightening speed and, for every hour of delay, a patient’s chance of dying increases 8 per cent.

Sepsis is a leading cause of avoidable death killing 44,000 people each year

The early symptoms of sepsis can be easily confused with more mild conditions, meaning it can be difficult to diagnose.

A high temperature (fever), chills and shivering, a fast heartbeat and rapid breathing are also indicators.

A patient can rapidly deteriorate if sepsis is missed early on, so quick diagnosis and treatment is vital – yet this rarely happens.

In the early stages, sepsis can be mistaken for a chest infection, flu or upset stomach.

It is most common and dangerous in older adults, pregnant women, children younger than one, people with chronic conditions or those who have weakened immune systems.

The six signs of something potentially deadly can be identified by the acronym ‘SEPSIS’:

Anyone who develops any of these symptoms should seek medical help urgently — and ask doctors: ‘Could this be sepsis?’

Monkeypox outbreak spreads as NEW case is identified in Australia

Can you sniff out the missing corgi in this special Jubilee puzzle?