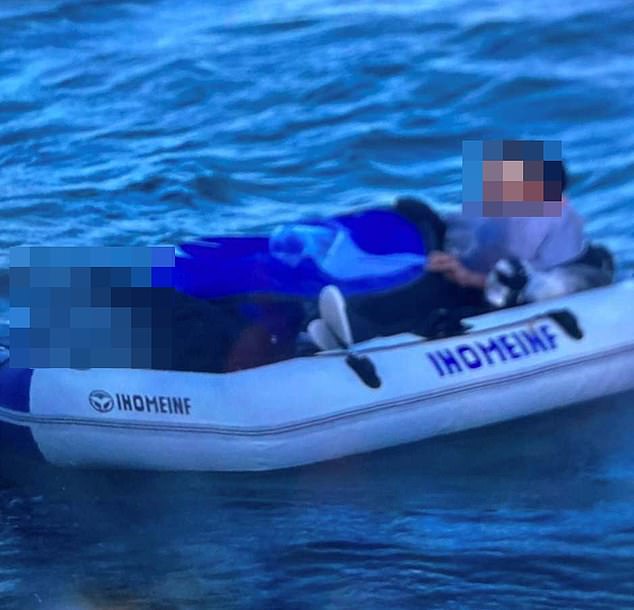 By James Tozer for the Daily Mail

A murder suspect was arrested when he tried to flee Britain in a thin inflatable dinghy with a tarpaulin as makeshift sail.

Apparently inspired by the tactics of migrants crossing the English Channel from France, the fugitive was spotted trying to make the reverse journey in a small, 2.8-metre-long boat.

A lifeboat was called in to rescue the man more than five miles off the Kent coast – only to be told he didn’t need their help. Incredibly, he told them he planned to continue his near suicide attempt to cross the world’s busiest shipping route in the £400 inflatable.

After rescuers convinced him that his journey was doomed, he was picked up and taken to shore.

A murder suspect (pictured) was captured trying to flee Britain in a flimsy inflatable dinghy with a tarpaulin as makeshift sail. Apparently inspired by the tactics of migrants crossing the English Channel from France, the fugitive was spotted trying to make the reverse journey in a small boat measuring 2.80 meters in length.

The man, in his forties, claimed he wanted to travel to Portugal via France because his work visa had expired. But after his name was passed to the police, it turned out that a warrant for his arrest had been issued for a murder committed the previous night.

Armed officers were rushed to the Dungeness rescue station and arrested the man, who cannot be named for legal reasons.

“We went out thinking it was going to be a routine rescue, but it turned out to be anything but!” one of those involved in the rescue told the Daily Mail.

A bait seeker first sounded the alarm one night earlier this month for the dinghy “floating” off St Mary’s Bay. “At first we assumed it was children messing around on a boat, as migrants normally come straight to shore,” the crew member said.

“He said his outboard had fallen off and he was holding up a tarpaulin to use as a sail. But it didn’t yield much.

‘The dinghy was hardly suitable for fishing in the bay, there was no chance of it crossing the Channel into it.

“The sea got rough, so even if he’d gone further into the fairway without crashing, he would’ve toppled over. 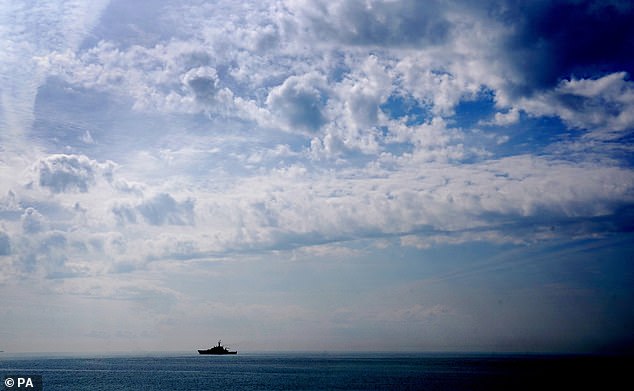 The man, in his 40s, claimed he wanted to travel to Portugal via France because his work visa had expired. But after his name was passed to police, it was revealed that a warrant for his arrest had been issued for a murder committed the previous night. (File image of a Royal Navy patrol ship)

“But although he had three cell phones, he hadn’t tried to call for help.”

The crew member said the man was “very reluctant to get on the lifeboat.” “Finally, after about 40 minutes, he agreed to come on board.

“He said the reason he was trying to cross the Channel was because his work visa had run out.”

He was met by members of the Romney Marsh Coastguard and taken to the Dungeness rescue station, medically assessed and given coffee and biscuits to warm him up.

Crucially, the suspect — who was wearing a tracksuit — had his passport with him so rescuers could find out his real name.

Coastguard teams, already suspicious of his ‘strange’ attitude, informed the Kent police – and the game was over.

They talked to him about water safety advice so as not to worry him as they waited for armed officers to arrive to arrest the suspect.

The man was then handed over to the police investigating the murder, where he was charged with murder and held in custody ahead of his trial.

A spokesman for the Maritime and Coast Guard Agency said it had received reports of “a dinghy drifting east of Dungeness Point with one person on board.”

“The Romney Marsh Coast Guard rescue team and the RNLI lifeboat from Dungeness were dispatched to rescue the victim and return them to shore where they were received by police,” she added.

The rescue comes as Coast Guard bosses look for new volunteers ahead of the busy summer season along the South Coast.