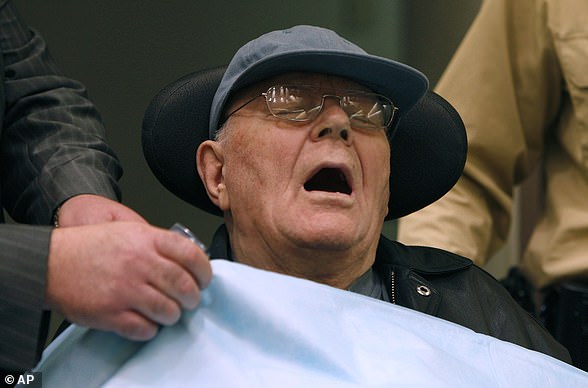 Seventy-six years after the end of World War II, the time is running out to bring people to justice for their role in the Nazi system.

According to the Central Bureau for the Investigation of National Socialist Crimes, prosecutors are currently dealing with eight more cases, including former workers in the Buchenwald and Ravensbrück camps.

In recent years, several cases have been dropped because the accused have died or were physically unable to stand trial.

The latest conviction was handed down to former SS guard Bruno Dey, who was given a two-year suspended sentence in July at the age of 93.

Historically, it was difficult to prosecute former Nazis for concentration camp murders due to the difficulty of proving they were directly involved in the murder.

But the 2011 conviction of John Demjanjuk set a legal precedent that allowed guards and staff to be held responsible for deaths in camps where they served, even if they could not be proven to have killed someone.

The ruling sparked a spate of new lawsuits and expanded the scope of the targets to include camp administrators such as Furchner — who is the only woman on trial for Nazi-era atrocities in recent years.

Here, MailOnline looks at others who have gone to trial years after their crimes took place…

John Demjanjuk at his 2009 Munich trial over the murder of 27,900 Jews in a Nazi death camp after 30 years of persecuting him after moving to Ohio

Ukrainian-American Demjanjuk was a Nazi guard who served in the Sobibor, Majdanek and Flossenbürg extermination camps between 1942 and 1945.

Originally enlisted in the Soviet Union’s Red Army, Demjanjuk was captured by the Nazis in 1942 and became a “Trawniki man” – a name for Eastern European Nazi collaborators recruited from POW camps.

After the war, he married a West German woman he met in an IDP camp and emigrated to the US, where he settled in Ohio.

In 1977, Israeli investigators identified Demjanjuk as “Ivan the Terrible” – a guard at the Treblinka extermination camp, notorious for his brutality, and had him extradited in 1986 to face charges.

He was convicted and sentenced to death in 1988, but his conviction was quashed in 1993 when the Israeli Supreme Court heard evidence that Ivan’s true identity was another Soviet man named Ivan Marchenko.

Although the identity has never been definitively proven, it was enough to cast reasonable doubt on the case and Demjanjuk was released.

He returned to the US but was stripped of his citizenship in 2002 and in 2009 Germany had him extradited to face charges of complicity in the murder of some 30,000 inmates at Sobibor who died while he was there.

Demjanjuk was a test case. Previously, it was difficult to convict former Nazi guards for murder in the death camps because it was necessary to prove that they were directly involved in the murders.

But lawyers convinced a judge that it was reasonable to convict Demjanjuk for complicity in murder simply by working in the camp, whether or not he was directly involved in the murder.

In May 2011, he was sentenced to five years in prison, but was released pending his appeal. He died the following year.

However, the case set a crucial legal precedent and opened a wave of lawsuits against camp guards and administrative staff for their role in the Nazis’ genocidal death machine.

In June 2022, a German court handed down a five-year prison sentence to a 101-year-old former Nazi concentration camp guard, the oldest person to face charges of complicity in war crimes during the Holocaust.

Josef Schuetz was found guilty of complicity in murder while working as a prison guard at the Sachsenhausen camp in Oranienburg, north of Berlin, between 1942 and 1945, chairman Udo Lechtermann said.

But despite his conviction, given his age, it is highly unlikely that he will be put behind bars to serve the five-year prison term. 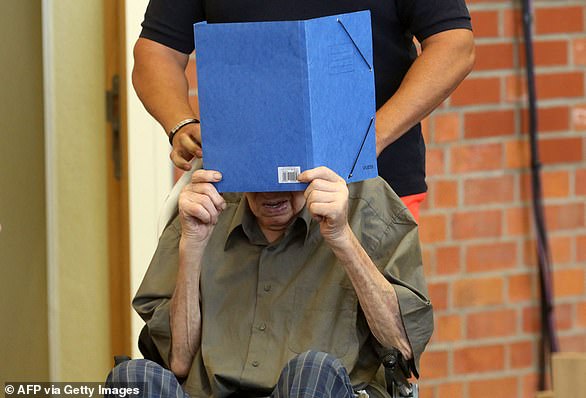 Josef Schuetz was found guilty of complicity in murder between 1942 and 1945 while working as a prison guard at the Sachsenhausen camp in Oranienburg, north of Berlin, chairman Udo Lechtermann said.

The Lithuanian-born pensioner, who now lives in Brandenburg state, had pleaded not guilty, saying he had done “absolutely nothing” and was unaware of the heinous crimes committed in the camp.

“I don’t know why I’m here,” Schuetz, who is the oldest person so far tried for Nazi war crimes during the Holocaust, said Monday at the end of his trial.

But prosecutors told the Neuruppin regional court, which is being held in a sports hall of a prison in Brandenburg an der Havel, that Schueltz “knowingly” participated in the murders of 3,518 inmates at the camp and demanded that he be sentenced to five years. behind bars.

Oskar Groening – ‘The Bookkeeper of Auschwitz’ 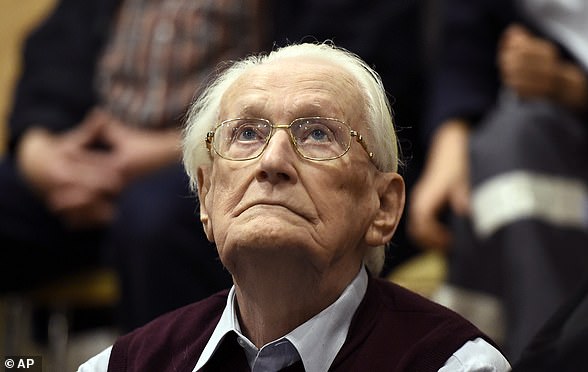 Oskar Groening, a 94-year-old former SS sergeant looking up as he listens to the verdict of his trial before a court in Lüneburg, northern Germany in 2017 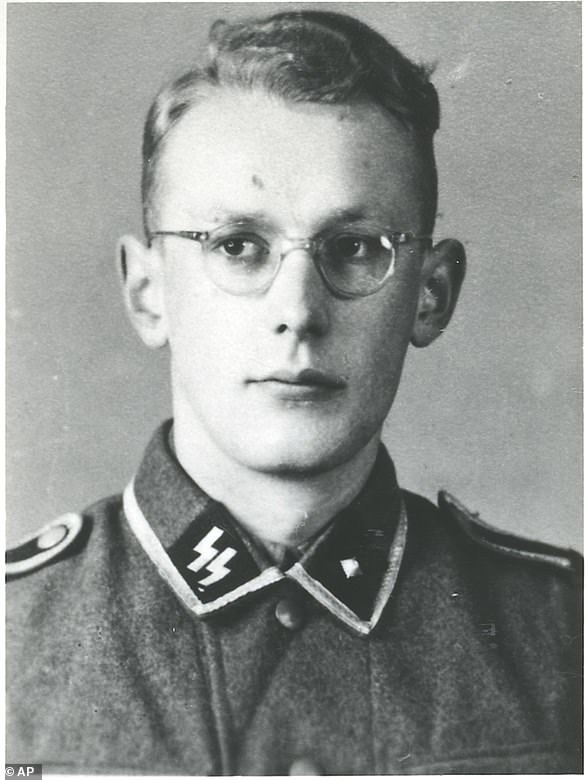 Born in 1921 in Lower Saxony, Groening was the son of a textile worker father and domestic mother who died when he was four years old.

His family had a military history, as Groening’s grandfather had served in an elite regiment of troops from the Duchy of Brunswick.

Raised in a conservative family, radical politics entered Groening’s life at a young age when his father joined the far-right group Stahlhelm – meaning Steel Helmet – in the wake of Germany’s defeat in World War I.

Groening only joined Stahlhelm’s youth wing a few years later, in the early 1930s, before switching to the Hitler Youth after the Nazis seized power.

Groening finished high school at the age of 17 and started working as a bank clerk several months later before the outbreak of war.

Groening decided to join an elite unit of the new German army and settled with the Waffen-SS.

Groening was accepted into the unit and spent a year there before being ordered to report to Berlin for a special task – helping to run the Auschwitz death camp.

On arrival, Groening was assigned to the administrative division – a position that would earn him his nickname as the bookkeeper of Auschwitz.

It was some time before he learned the true purpose of the camp, and when he found out, Groening complained and requested a transfer to a combat position.

However, he never objected to the killing of Jews and others in the camp—just the methods used—and when his transfer request was denied, he went on to live a comfortable life by eating extra rations given to the guards and getting drunk. be with his fellows. officers.

Groening served in the camp from 1942 to 1944 when he got his wish and was sent to fight against the Allies in the Battle of the Bulge.

Captured by the British in 1945, he was transferred to the United Kingdom, where he worked as a farm labourer, and later returned to Germany to work as a glass factory manager.

Groening rarely spoke of his experiences in Auschwitz until the mid-2000s, when he revealed his role as a way to retaliate against Holocaust deniers.

He gave several prominent interviews in which he spoke candidly about gas chambers, furnaces and burial pits, as well as taking jewelry from the dead.

In 2014, he was charged by German prosecutors with complicity in the murder of 300,000 people who died while staying there in Auschwitz, and in July 2015 he was found guilty and sentenced to four years in prison.

Groening appealed the verdict and died in hospital in 2018 before starting his jail term. 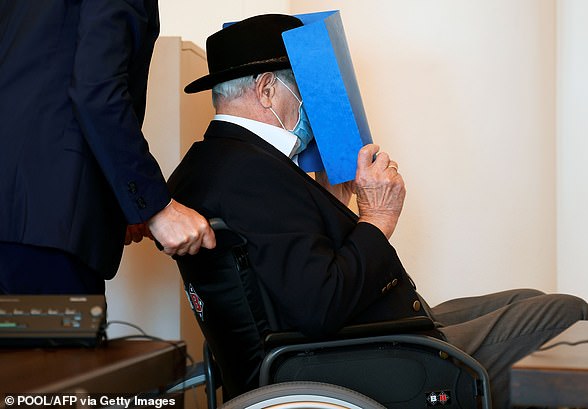 Last year, 93-year-old Bruno Dey, pictured, was convicted of his part in the Holocaust after serving as an SS guard at Stutthof.

The latest conviction was handed down to former SS guard Bruno Dey, who was given a two-year suspended sentence in July at the age of 93.

He was charged with complicity in the murder of 5,230 people while working at the Stutthof camp near what was then Danzig, now Gdansk in Poland.

Dey admitted last year that he had been aware of the camp’s gas chambers and admitted to seeing “starving figures, people who had suffered,” but insisted he was not guilty.

In a separate case, a 100-year-old man will stand trial next week in Brandenburg for alleged service as a Nazi SS guard in a concentration camp just outside Berlin during World War II.

The man, whose name was not released in accordance with German privacy laws, is charged with 3,518 counts of complicity in murder.

The suspect is said to have worked in the Sachsenhausen camp between 1942 and 1945 as a conscripted member of the paramilitary wing of the NSDAP.