Social media users are outraged after advice on the NHS website about ‘ways to manage chronic pain’ went viral.

British Twitter user Sarah M shared a screenshot of the advice in a Tweetwhich garnered over 22,500 likes, with the caption: ‘Jesus Christ man…95 percent of that page offers no advice at all on managing your pain…@NHSUK just say you don’t know anything.’

The advice is taken from the NHS UK website, under the ‘Live Well’ and ‘Pain’ sections and reads: ‘Ways to manage chronic pain. Moving and continuing to work if you can are key to managing persistent pain, also known as chronic pain, to live a fuller life.”

Other Twitter users were stunned by the advice, with some saying it contradicted what doctors had told them about managing their pain.

One commented, “It’s 100 percent sure this was written by someone who’s never had chronic pain.”

A second added: ‘Yeah, that’s about what we get.

“I’m surprised they don’t say ‘We think you’re making it up and it’s all in your head,’ as the physical therapist told me before giving me a HIIT routine I can’t do and then asking me to leave.”

And a third said, “I’ve literally been told that exercising damages my joints and makes my pain worse, what?” 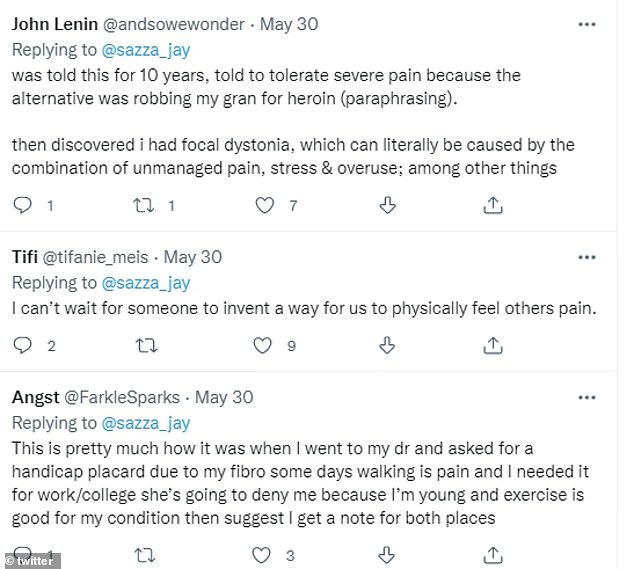 Other Twitter users were equally outraged by the page, with some saying they were advised not to exercise by doctors

What is Chronic Pain?

Chronic pain is defined as persistent long-term pain that either lasts longer than 12 weeks or lasts unusually long after trauma or surgery.

The mainstay of treatment is normally painkillers.

However, a series of new studies show that our most commonly used strong pain medications are not only ineffective for common conditions, they are also dangerous — and can cause chronic pain themselves.

A fifth wrote: ‘”We’re not going to help you anyway, so just carry on as you were.”‘

Another added: ‘The NHS is objectively terrible for so many chronic conditions.’

“Chronic pain is such a wide range of injuries/conditions that they should not give advice at all,” one commented.

“So basically pushing through,” another wondered, “that’s part of why I’m where I am, because I’ve been pushing for so long.”

However, others disagreed, saying the advice on the NHS website had worked for them, with one saying ‘this is good’

However, others disagreed, saying the advice on the NHS website had worked for them.

Dance is the greatest medicine! Expert says doing a jive every day can reduce anxiety and help manage chronic pain

Put laughter aside, dancing can be the real natural medicine for treating anxiety and chronic pain.

Starre Vartan, a prominent science writer and former geologist, writes for the Washington Post that dance has helped her through tough, lonely times during the COVID-19 pandemic, and experts agree the activity could have positive effects on the brain.

While there are known links between regular exercise and improved mental health, experts say dancing may still have some benefits.

Daily dancing has been linked to teaching anxiety symptoms, managing chronic pain, and even an overall higher quality of life for those suffering from Alzheimer’s disease.

One commented, “TBH, if I move and stay active in the gym, it helps with my pain.”

Another wrote: ‘This is correct.

‘If pain is nothing but old age, you have to keep moving, otherwise the pain will get worse. It’s a cycle.’

A third added: ‘Yeah, they don’t know. But isn’t this the best advice they can give for a short and general blurb?

‘Honest question, stemming from my own unemployment and the ensuing madness.

“Idk, I’d rather be encouraged to stay active and involved than be prescribed painkillers.”

Chronic primary pain is a condition in itself that cannot be explained by another diagnosis or as a symptom of an underlying condition.

Doctors often define chronic pain as any pain that lasts for three to six months or more.

It is notoriously difficult to treat and is characterized by significant emotional difficulties and functional limitations.

The advice is available on the NHS website under the ‘Live Well’ and ‘Pain’ sections.

It says: ‘Long time in bed can make back pain last longer. Lack of activity can cause it: you stiffen up, get up, your muscles and bones get weaker, you don’t sleep well, you become lonely and depressed, the pain gets worse.’

And it adds that a “better approach” to reduce pain involves a combination of: exercise, staying at work, physical therapy, and pain medications.

And the site also suggests talking to a boss or supervisor about your condition, trying to go in and work with custom changes that are right for you.

Finally, it mentions physical therapy, saying a course of it can help with pain and will be administered by a physiotherapist or chiropractor.

The NHS website also recommends painkillers, but says adults should try to stick to acetaminophen.

There is some evidence that cognitive behavioral therapy (CBT), already used in the NHS for chronic primary pain, improves quality of life and is not harmful.

A newer type of therapy called “acceptance and commitment therapy” has been shown in a small number of studies to improve quality of life and sleep and reduce pain and psychological distress. 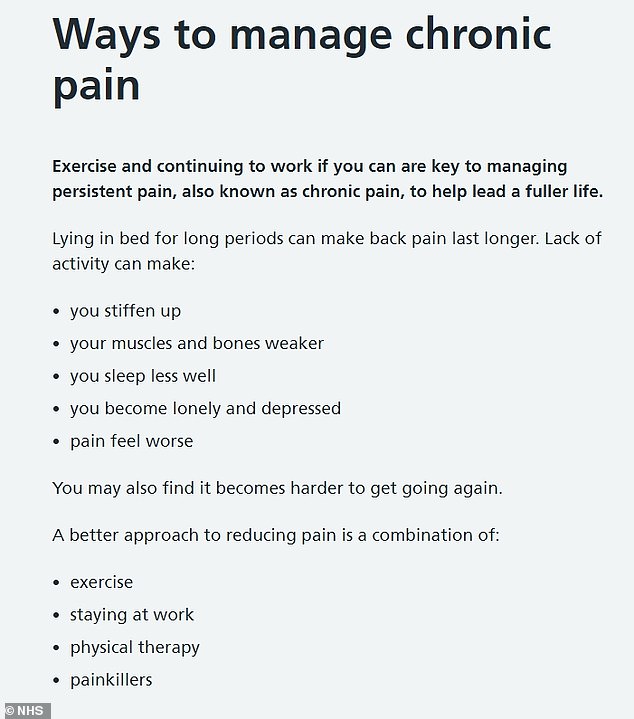 The seven most important ‘posing points’ that will make everyone look…