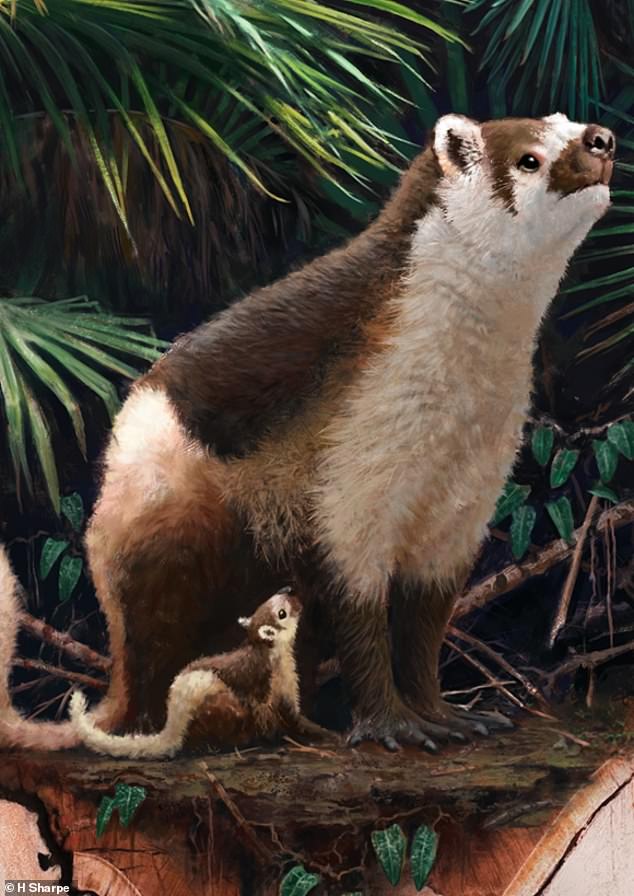 Live fast, die young: Some prehistoric mammals grew up TWICE as fast as their modern counterparts – giving them a competitive edge after the dinosaurs were wiped out

Some prehistoric mammals were born almost independently and grew up twice as fast as their modern-day counterparts, giving them an edge over other animals after the dinosaurs went extinct, a new study has suggested.

The research provides insight into how our early ancestors rose to prominence some 62 million years ago and dominated areas previously occupied by Tyrannosaurus rex, Triceratops and others.

Scientists used dental analysis to uncover the life history of Pantolambda bathmodon (P. bathmodon) — a member of the earliest known group of herbivores that grew about the size of a sheep in the post-dinosaur era.

Their findings suggest that P.bathmodon mothers were just under seven months pregnant and gave birth to single, well-developed babies with mouthfuls full of teeth.

Discovery: Scientists used dental analysis to discover the life history of Pantolambda bathmodon (shown in an artist’s impression) — a member of the earliest known group of herbivores in the post-dinosaur era. Their findings suggest mothers were just under seven months pregnant and gave birth to single, well-developed babies

Pantolambda bathmodon is an extinct creature that was about the size of a sheep and lived just four million years after Tyrannosaurus rex.

The fossilized remains have been found in Asia and North America.

The species had a vaguely feline body, a heavy head and a long tail.

It was one of the first mammals to expand into the large animal niches created by the extinction of the dinosaurs, living some 62 million years ago.

The offspring, probably mobile from day one, nursed for only one to two months before becoming fully independent.

While the gestation inferred from the study is similar to that of contemporary mammals of similar size, this early mammal appears to have lived and died faster by comparison.

The data shows that P. bathmodon was independent and ready to mate before their first birthday, living an average of only three to four years, while most mammals of similar size today live 20 years or more.

“When the asteroid slammed the dinosaurs 66 million years ago, some mammals survived and they expanded in size very quickly to fill the ecological niches vacated by T. rex and Triceratops, and other giant dinosaurs,” said Professor Steve Brusatte of the University of Edinburgh.

The ability to produce large babies, which matured in the womb for several months before being born, helped transform mammals from the humble mouse-sized ancestors that lived with dinosaurs to the vast array of species, from humans to elephants to whales, those around today.’ 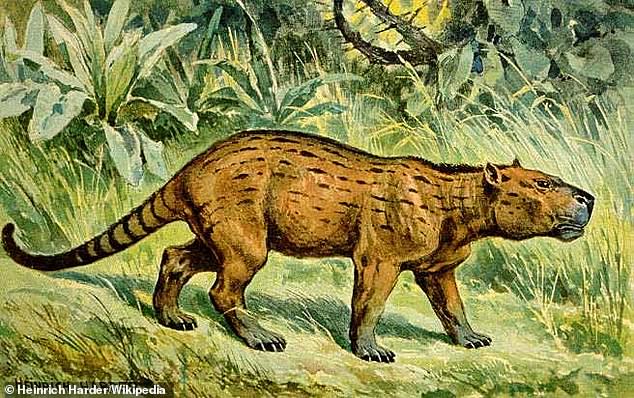 Their findings suggest that P.bathmodon mothers (shown in an artist’s impression) were just under seven months pregnant and gave birth to single, well-developed babies with mouthfuls full of teeth. 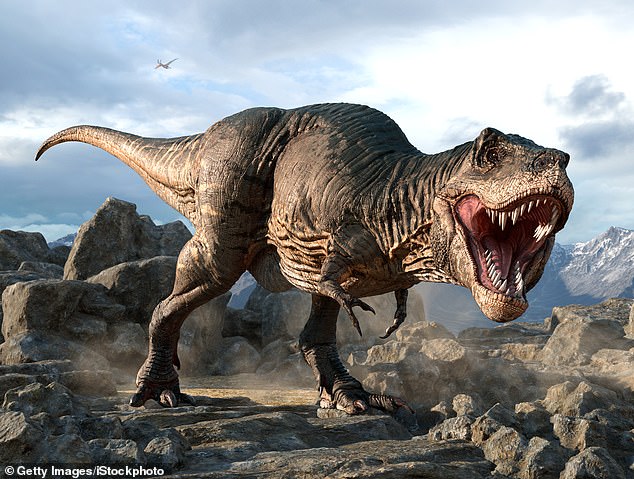 The study provides insight into how our early ancestors gained prominence some 62 million years ago and dominated areas previously occupied by Tyrannosaurus rex (pictured), Triceratops and others

The scientists found that chemical changes in the teeth showed major transitions in the creatures’ early lives, including high levels of zinc deposited at birth, and barium enrichment during lactation.

Lead author Dr Gregory Funston, Royal Society Newton International Fellow, University of Edinburgh and currently based at the Royal Ontario Museum, Toronto, said: ‘Our research opens the most detailed window yet into the daily life of extinct mammals.

This unprecedented level of detail shows the types of lifestyles that make placental mammals special, which evolved early in their evolutionary history.

“We think their babies’ longer gestation periods could have fed large body sizes faster than other mammals, which may be why they’ve become the dominant mammals of today.”

The study is published in the journal Nature.

HOW DID THE DINOSAURS SET OUT ABOUT 66 MILLION YEARS AGO?

Dinosaurs ruled and dominated the Earth about 66 million years ago, before suddenly becoming extinct.

The Cretaceous-Tertiary extinction event is the name given to this mass extinction.

For years it was believed that the changing climate was destroying the food chain of the huge reptiles.

In the 1980s, paleontologists discovered a layer of iridium.

This is an element that is rare on Earth, but found in large quantities in space.

When dated, it coincided exactly with when the dinosaurs disappeared from the fossil record.

A decade later, scientists discovered the massive Chicxulub crater on the tip of Mexico’s Yucatán Peninsula, which dates back to the period in question.

Scientific consensus now says that these two factors are linked and that they were both likely caused by a huge asteroid that crashed into Earth.

At the projected magnitude and impact speed, the collision would have created a massive shock wave and likely triggered seismicity.

The precipitation would have created plumes of ash that likely covered the entire planet and made it impossible for dinosaurs to survive.

Other animal and plant species had shorter time spans between generations that allowed them to survive.

There are several other theories as to what caused the demise of the famous animals.

An early theory was that small mammals ate dinosaur eggs, and another holds that poisonous angiosperms (flowering plants) killed them.

Amazon shoppers call this all-season dress flattering and fun and it’s reduced by 45% to just $22.48