Prince and Princess of Wales say goodbye to ‘mother, grandmother and great-grandmother’ 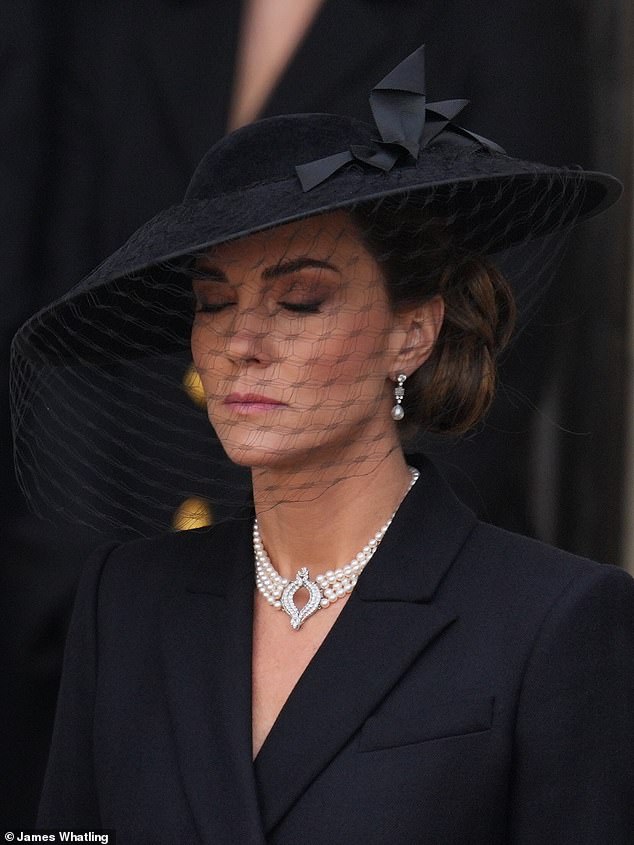 The Prince and Princess of Wales have said their final goodbyes to Queen Elizabeth II in a touching Twitter post.

Kate Middleton and Prince William, both 40, posted a black and white photo of the porters carrying the Queen’s coffin in St George’s Chapel, Windsor, for this afternoon’s service.

They wrote on their official Twitter account: “Goodbye to a queen, a mother, a grandmother and a great-grandmother.” 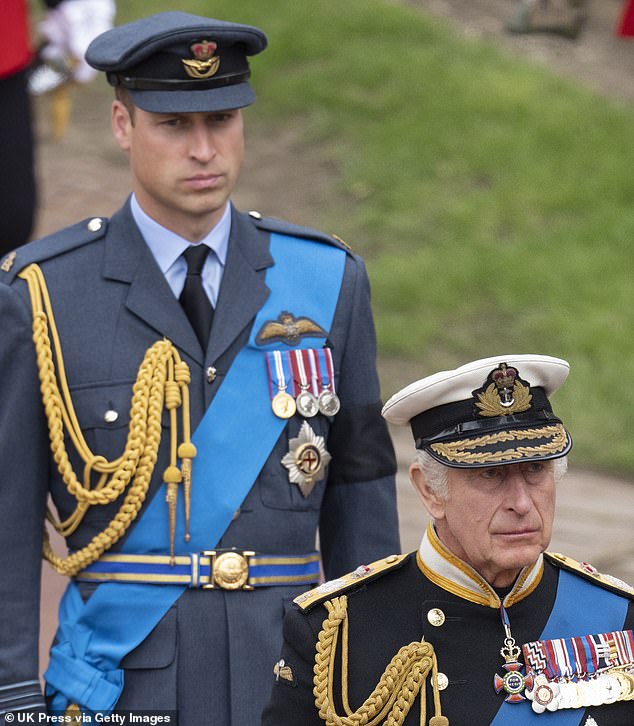 Prince William was committed to his duty as he walked behind his father Prince Charles as they walked behind the Queen’s coffin at the entrance to St George’s Chapel, Windsor 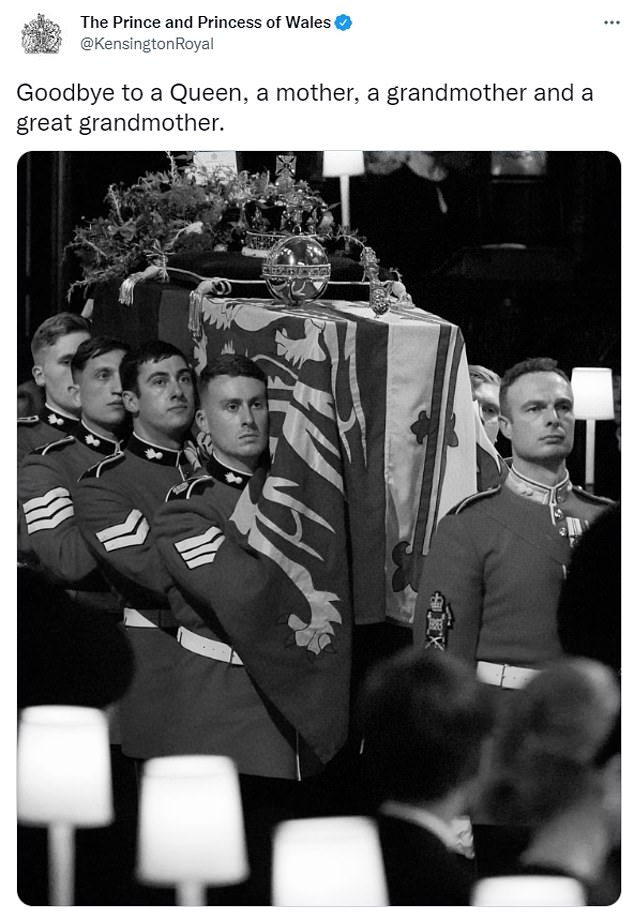 The Queen was dedicated to the chapel of the chapel where she will lie in eternity with Prince Philip, her father King George VI, the Queen Mother and her sister Princess Margaret.

The Prince and Princess of Wales remained stoic throughout the day as they went about their duties as part of the Queen’s state funeral at Westminster Abbey and later conscription at Windsor.

The family will also pay their respects to Her Majesty tonight in a private, more intimate service, to bid farewell to the Queen.

Kate paid tribute to Her Majesty in her outfit by wearing her delicate earrings and a pearl choker necklace that was also lent to Princess Diana. It’s the same necklace and earrings she wore to the Duke of Edinburgh’s funeral last year. 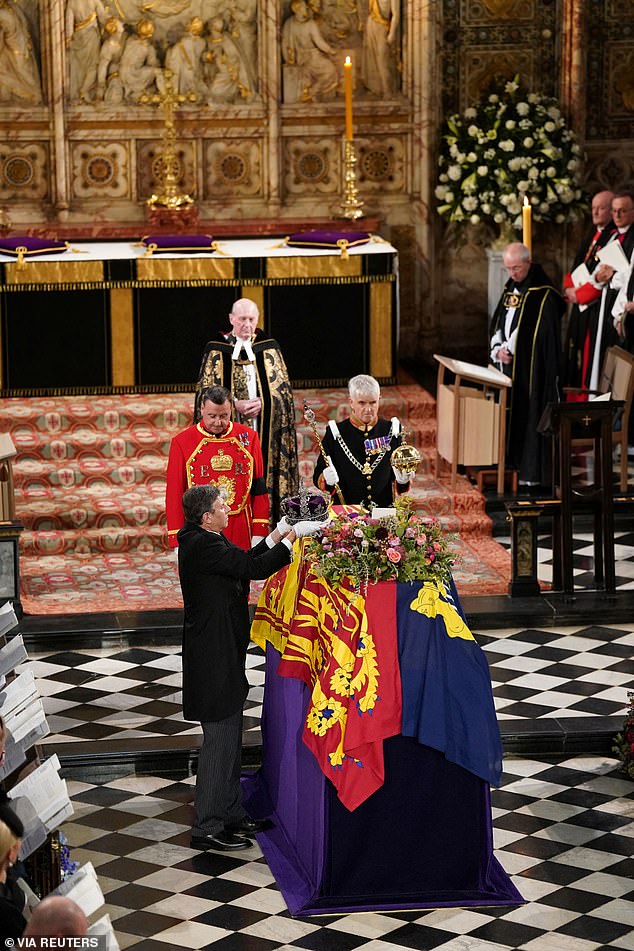 Meanwhile, William took his royal duties seriously as he walked behind his grandmother’s coffin as part of the procession led to Westminster Abbey for the state funeral.

The Prince and Princess of Wales also walked behind the Queen’s casket in St George’s Chapel before taking their seats at the service.

The royal family had walked into the chapel behind the queen’s casket after it had been taken from the treasury and carried in before the service at 4pm. The procession was ushered in by members of the Queen’s royal household.

William then showed his younger brother, Prince Harry, to his seat in the chapel and watched him walk to the end of the bench holding his son Prince George next to his wife Kate Middleton and daughter Princess Charlotte as he beckoned to Harry and Meghan walk past them.

Harry and Meghan then sat down, with the Duke of Sussex next to Charlotte. Kate sat between Charlotte and George, with the nine-year-old prince sitting next to William at the end of the couch.

The Committal Service was led by the Dean of Windsor and, like her family, consisted of a congregation of friends and mourners from her household, past and present, including her personal staff from her private estates.

At the end of the last hymn, the king placed the Queen’s Company Color of the Grenadier Guards – the regiment’s royal standard – on the coffin.

Baron Parker, the Lord Chamberlain and the highest official in the royal household of the late Queen, then ‘broke’ his wand and placed it on the coffin.

As the coffin was lowered into the royal vault, the Garter King pronounced the Queen’s styles and titles and the Sovereign’s Piper played a lament before slowly walking away to let the music fade.

During this evening’s private funeral, the Dean of Windsor will once again lead the proceedings.

At present, a black stone slab has been placed in the floor of the King George VI Memorial Chapel.

It features the names of George VI and his wife Elizabeth – who died in 2002 – in gold letters, above the dates of their births and deaths.

Nearby, there is a slab of black and white diamond-shaped stones that is taken away for burials to access an elevator.

Princess Margaret died just weeks before her mother and was subsequently cremated. Her ashes were initially kept in the royal vault and then moved to the chapel to be with her parents.

The memorial chapel was added on the north side of St. George’s, behind two of the buttresses that support the building’s north wall.

The ceremony to bring King George’s body there was private, as was the chapel’s dedication the following week.

St George’s Chapel itself was ordered by King Edward IV, construction of which began in 1475 and ended in 1528 under the reign of King Henry VIII.

Henry is one of the princes who will be buried there. The others are George III, George IV, George V and William IV.

In addition to funerals, successive royal weddings have been held at the chapel, including Queen Victoria to Prince Albert and Prince Harry to Meghan Markle in 2018.

Last April, moving images showed that the Queen had to sit alone during Prince Philip’s funeral in the chapel due to the corona measures.