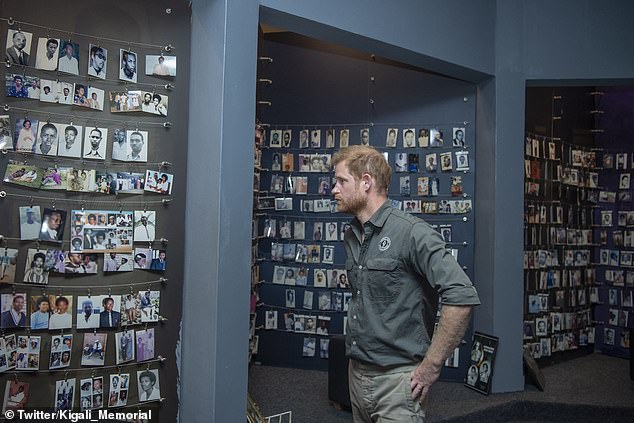 Prince Harry has praised Rwanda’s ‘incredible show of unity and resilience’ as he visited a genocide memorial and met the country’s president during an unannounced tour.

The Duke of Sussex, 37, paid a visit to the Kigali Genocide Memorial on Saturday – a site that remembers the victims of the 1994 mass genocide.

It comes just weeks after his father Prince Charles and wife Camilla visited the memorial site, where the remains of an estimated 250,000 victims are buried.

Meghan Markle’s friend Omid Scobie today gave details of what Harry wrote in a visitor book during his time at the site.

He said: ‘I am profoundly moved by what I have witnessed. What an incredible show of unity and resilience we now see.

‘Thank you for showing us all the way to healing and forgiveness. You are setting an example across the world.’

It comes after Harry, who is currently living in his $14 million mansion in California having stepped back from royal duty, also made a solo trip to Mozambique’s azure Indian Ocean coast last week.

The Duke made the 20,000 trip from California to host a group of US officials, conservationists and philanthropists on a tour of the pristine Bazaruto Archipelago in his role as president of African Parks, his spokesperson said.

However it then emerged the father-of-two had also visited Rwanda during his trip to Africa.

He later went on to visit the Kigali Genocide Memorial, with the organisation sharing a number of pictures of the royal on Twitter 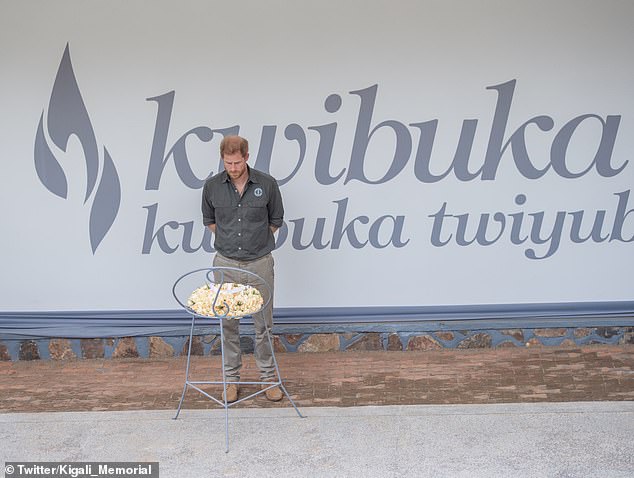 The President’s official Twitter account posted: ‘President Kagame received Prince Harry, The Duke of Sussex, who visited Rwanda as part of his work as President of African Parks.

‘The Government of Rwanda has agreements with African Parks to manage Akagera and Nyungwe National Parks.’

He later went on to visit the Kigali Genocide Memorial, with the organisation sharing a number of pictures of the royal on Twitter and writing he ‘paid his respects to victims of the Genocide against the Tutsi.’

The royal appeared not to have been joined by his wife Meghan Markle, 41, or his children Archie, three, or Lilibet, one, on the trip.

News of the prince’s surprise African visit first emerged after he was photographed at the luxury $270-night Vilanculos Beach Lodge on the edge of the Bazaruto Archipelago National Park which is managed by African Parks last week.

A source told MailOnline Harry flew to Heathrow last Sunday, where he changed to a connecting flight to Johannesburg.

Harry and his ex-girlfriend Chelsy regularly visited Bazaruto island, the largest of six in the archipelago where they made the most of its empty white sand beaches and snorkelled in coral reefs populated by thousands of marine life species.

Bazaruto’s isolation and protection have also guarded one of the world’s last populations of dugongs, also known as sea cows, the giant underwater grazers on the verge of extinction. 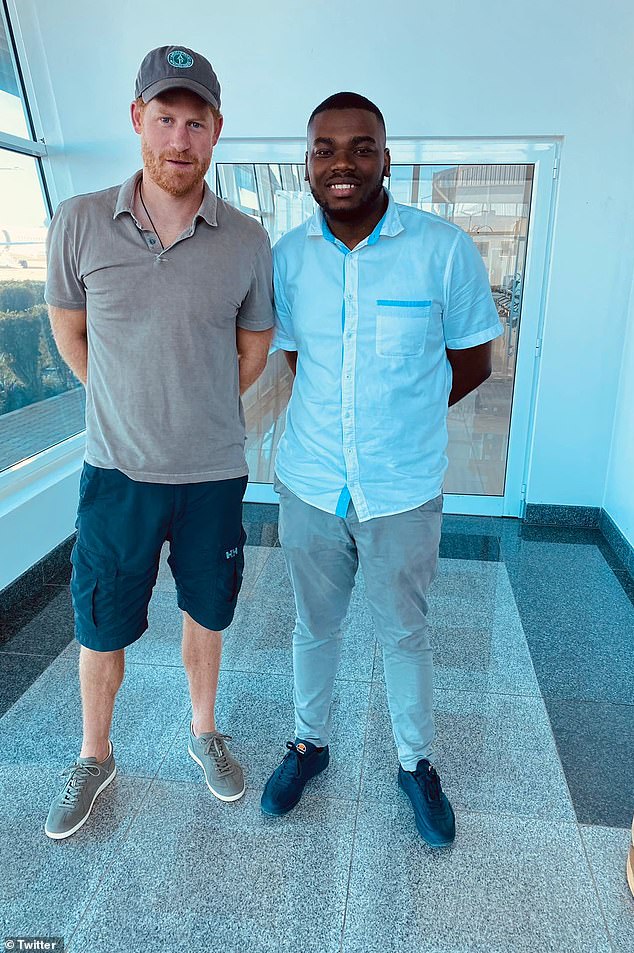 The Duke of Sussex, 37, made a surprise solo three-day visit to Mozambique last week (pictured, during the trip)

The blonde beauty dated Prince Harry for seven years until 2010 and has remained largely out of the spotlight in the 12 years since.

Yassin Amuji, the head of Vilanculos tourism association, met Harry over breakfast at his beachfront resort before the prince headed off by boat from the local port to check on the work of African Parks which runs the Bazaruto Archipelago.

‘He was simple and humble and very polite even when guests at the hotel were coming up to take pictures.

‘I have seen Prince Harry coming to this area since he was in his Twenties and enjoying his holidays to Bazaruto. I know he will come back and hopefully bring his family next time,’ Mr Amuji told MailOnline.

‘I explained to him how difficult things have been in the tourist industry because of covid and he was very sympathetic and wished us well. 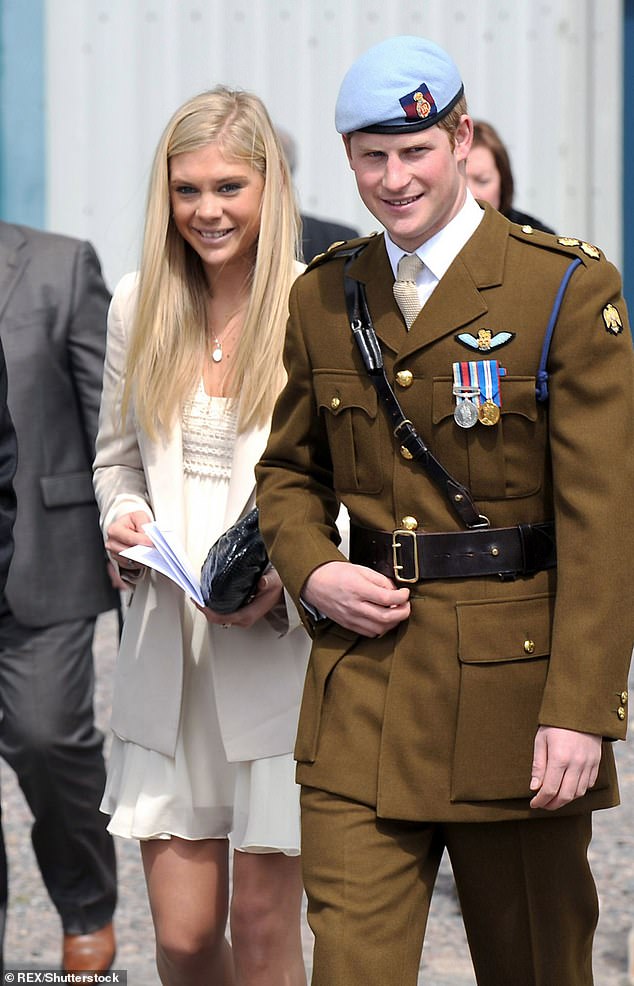 ‘He toured the archipelago to see the work being done by African Parks and travelled by boat from Vilanculos because it is very close by boat and you can see a lot of the wildlife that way.’

During his recent speech at the United Nations, on Nelson Mandela Day, Harry expressed his deep connection to the continent.

‘Since I first visited Africa at 13 years old, I’ve always found hope on the continent. In fact, for most of my life, it has been my lifeline… It’s where I’ve felt closest to my mother and sought solace after she died, and where I knew I had found a soulmate in my wife’.

Harry and Meghan considered setting up home in Cape Town before finally settling on moving to Canada and then California. Many of the Duke’s closest friends are based in neighbouring Botswana.

Meghan, 40, and Harry have traveled to Africa together several times, including a visit to Botswana early in their relationship in the summer of 2016.

‘I managed to persuade her to come and join me in Botswana. We camped out with each other under the stars.

‘She came and joined me for five days out there, which was absolutely fantastic,’ Harry said after their engagement. ‘So then we were really by ourselves, which was crucial to me to make sure that we had a chance to know each other.

The couple’s tour of Africa in 2019, bringing along their son Archie, was the last one they made as members of the royal family.

South Africa-based African Parks manages around 20 national parks on behalf of governments in nearly a dozen countries including Malawi, Zambia, Rwanda and Chad. 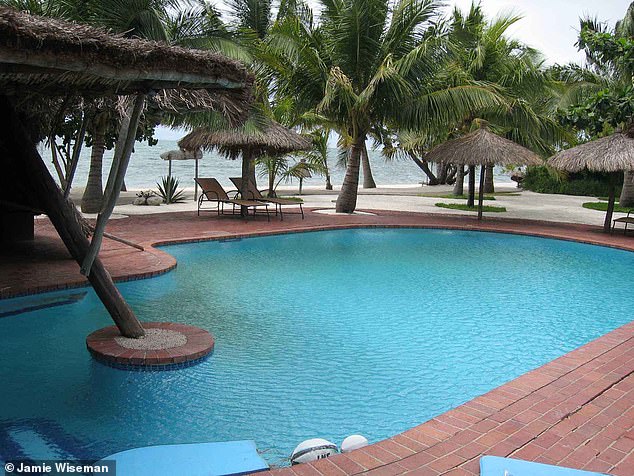 The couple would visit Bazaruto island, the largest of six in the archipelago where they would snorkel in coral reefs populated by thousands of marine life species (pictured, a resort Harry and Chelsy stayed at in 2004)

The conservation charity is one of the few private patronages Harry kept after Megxit in 2020. He became its figurehead after working as a volunteer in Malawi where they relocated 500 elephants – the most ambitious project of its kind.

His surprise visit comes after it emerged the Sussexes will come to Britain next month for the first time since the Platinum Jubilee to attend several charity events, including the One Young World Summit in Manchester on September 5.

In photographs shared online of the Duke’s visit to the country, he looked relaxed in grey polo shirt, baseball cap and navy shorts.

In one snap posted by author Eric Morier-Genoud on Twitter, the royal could be seen posing with another man. 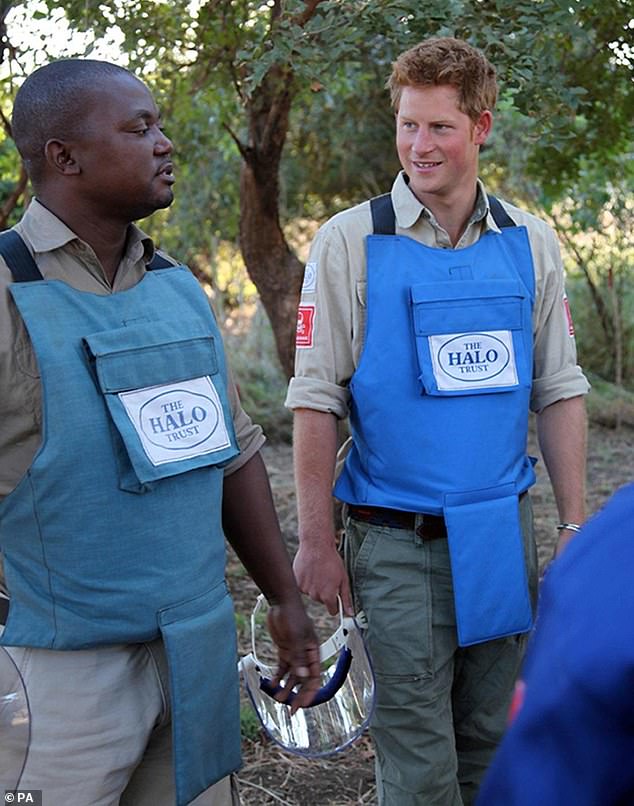 The Duke has visited Mozambique before – in 2010, he made a secret visit to the country where he joined British charity The Halo Trust  (pictured in 2010)

The Duke has visited Mozambique before – in 2010, he made a secret visit to the country where he joined British charity The Halo Trust.

The charity cleared an astonishing 105,000 landmines from the northern part of the country and took then-25-year-old Harry to see their work at a village close to the Cahora Bassa dam in Tete, central Mozambique.

His latest visit comes as royal experts said Harry and Meghan may use their visit to the UK next month as a chance to see the Queen, – although their arrival coincides with a busy week in which the monarch will also meet the new Prime Minister.

They will then head to Germany for the Invictus Games Dusseldorf 2023 One Year to Go event, before returning to the UK for the WellChild Awards on September 8.

It is not known if their three-year-old son, Archie, or Lilibet, one, will join them.

The couple are likely to want to spend time with the Queen after enjoying ‘barely 15 minutes’ with her during the Platinum Jubilee celebrations this summer, according to royal watchers.

The monarch is currently in Balmoral but will be in London on September 6 to meet either Liz Truss or Rishi Sunak when they are made PM.

Earlier this month, she invited Harry and Meghan to join her at her Highland retreat, The Sun reported.

Royal expert Richard Fitzwilliams earlier this week suggested a meeting with the monarch would be more likely to take place in London or Windsor. 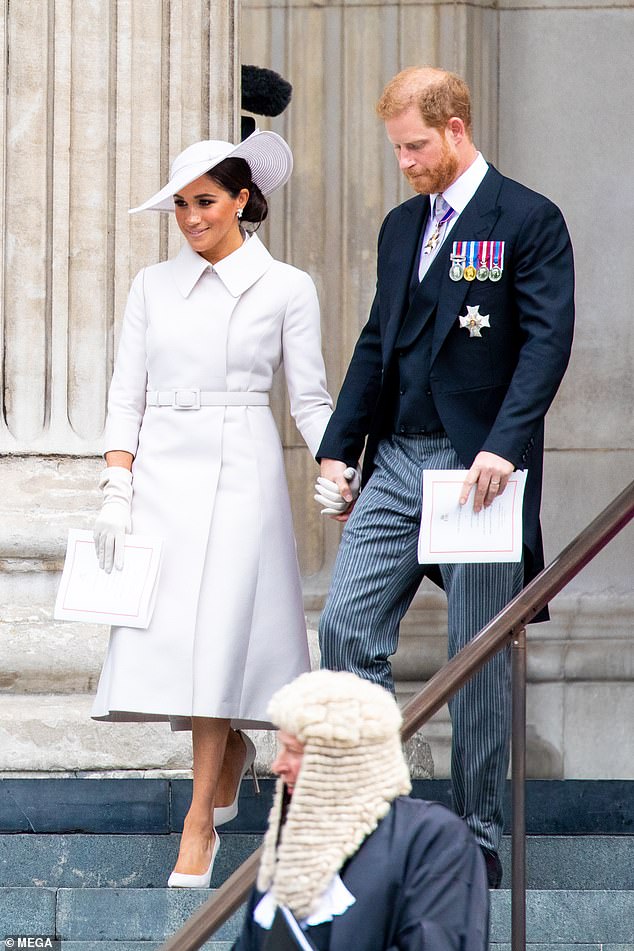 His surprise visit comes days after it emerged the Sussexes will come to Britain next month for the first time since the Platinum Jubilee to attend several charity events, including the One Young World Summit in Manchester on September 5

He told MailOnline: ‘The reports that the Queen had invited Harry and Meghan to Balmoral were never confirmed. However it would only make sense for them to see her when she is at Windsor and when they are based at Frogmore, as they could only spend a very little time with her during the Platinum Jubilee.

‘If she does come down as anticipated, she may receive the new Prime Minister at Windsor or at Buckingham Palace. There would also be time for her and the Sussexes to discuss the future, which hopefully will be more constructive than the recent past.

‘They also must be aware that some form of reconciliation in the Platinum Jubilee year would surely be beneficial for the image they want as philanthropists.’

However, Phil Dampier suggested Balmoral could be the more likely venue.

‘Whether he meets the Queen will probably depend on her. If she tells them she wants to see them I’m sure they will pop in for a chat,’ he told MailOnline.

‘I’m sure she would hope the relaxed atmosphere there would be more conducive to talking things through and trying to solve the problems they all face.

‘Meghan won’t like the hunting shooting and fishing environment of the Highlands but the Queen would feel much more comfortable meting them there rather than a rushed meeting in London.’

A spokesman for the Sussexes said: ‘Prince Harry and Meghan, The Duke and Duchess of Sussex are delighted to visit with several charities close to their hearts in early September.’

The announcement comes just weeks after it emerged Harry had filed a second lawsuit against the government and Scotland Yard over the decision not to allow him to pay for police protection when he visits from California.

The Duke of Sussex is already suing the Home Office over its decision in 2020 to remove his taxpayer-funded protection, which he says makes it unsafe for him to come to Britain with his wife, Meghan Markle, and two children, Archie and Lilibet.