Princess Charlotte looked impeccable in a cornflower blue dress when she arrived at Trooping the Color with her brothers today.

The Queen’s great-granddaughter, 7, was dressed in a beautiful pastel dress from Patachou when she arrived in a carriage with Prince George, 8, Prince Louis, 4, Camilla, Duchess of Cornwall and her mother, the Duchess of Cambridge.

Crafted from chiffon, the elegant design features a full skirt with ruffles, butterfly sleeves and bow details, and is still available in a handful of sizes.

However, it sold out quickly and was recently reduced from £77 to £54, which is a 30 percent saving.

The Portuguese label Patachou describes itself as an ‘accessible luxury brand’ and focuses on children up to 14 years. 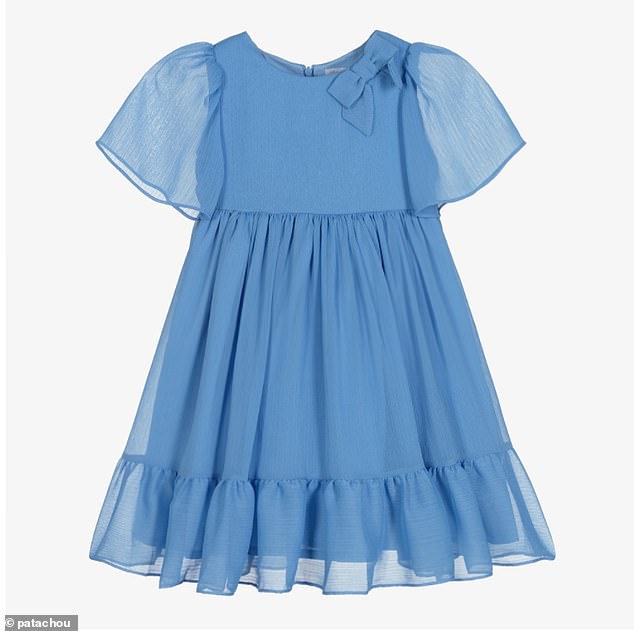 The Queen’s great-granddaughter wore her loose with a neat braid and matching blue ribbon. The dress (pictured) has a ruffled hem, puffed sleeves and a pretty bow at the neck

Charlotte was typically sassy today, and an adorable clip shows the seven-year-old wearing her hair down in a neat braid and matching blue ribbon, and Prince Louis saying ‘stop waving!’ as they made their journey through the crowd.

Prince George, the eldest child of Prince William and Kate Middleton, dressed in a sharp navy suit with matching blue tie, watched as the little bickering erupted in the royal carriage.

Little Prince Louis, dressed in an immaculate white sailor suit, seemed undisturbed by his sister’s chastisement, yet continued to wave.

The young royal bore a striking resemblance to his same-aged father, who wore a similar outfit at the 1985 Trooping the Color event. 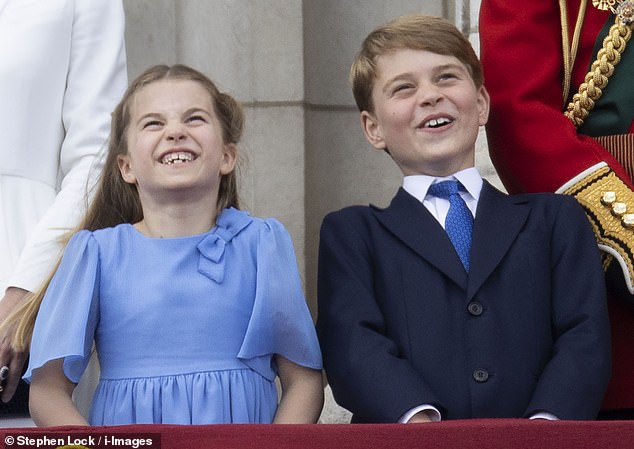 Charlotte pictured with her brother Prince George, 8, watching a flypast from the balcony of Buckingham Palace 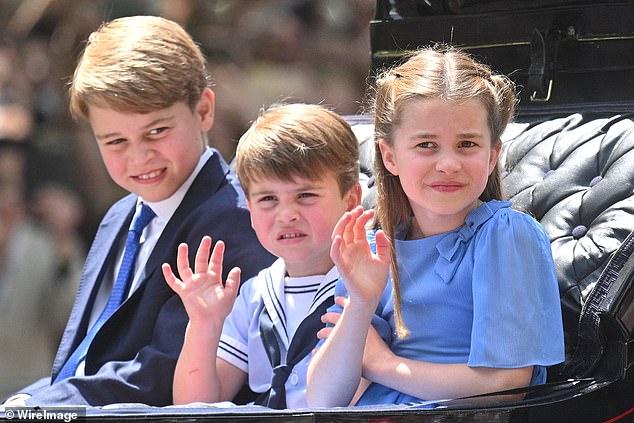 The young royal arrived at the event in a carriage with her brothers, Prince George, 8, (left) and Prince Louis, 4, (center) 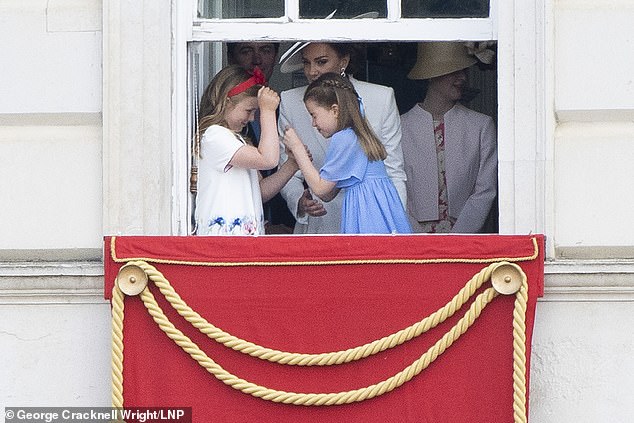 The mischievous royal was later spotted in a playfight with her cousin Mia Tindall, 8, at a Buckingham Palace window 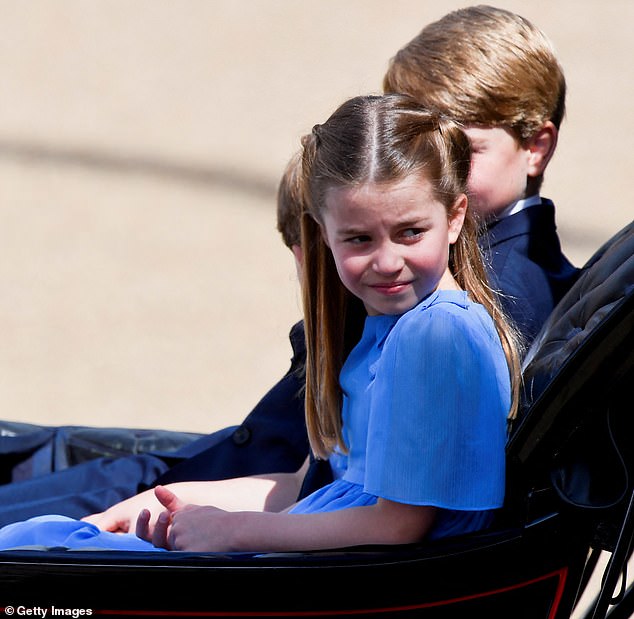 Charlotte arrives at Trooping the Colour, also known as The Queen’s Birthday Parade, in her elegant Patachou dress 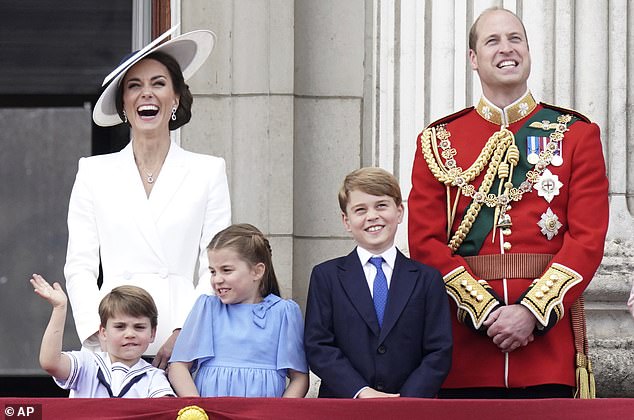 The Cambridges watch from the balcony of Buckingham Palace after the Trooping the Color ceremony in London, marking the first of four days of platinum anniversary celebrations 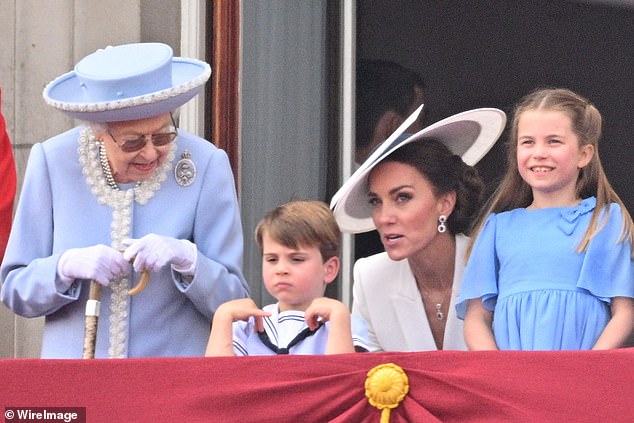 The Queen was also chosen for blue as she appeared on the balcony of Buckingham Palace in a powder blue suit with Kate, Prince Louis and Princess Charlotte

Charlotte was later spotted having a game fight with her cousin Mia Tindall, 8, in the window of the Major General’s office overlooking the Whitehall parade ground.

Kate seemed unimpressed and had to intervene to separate them.

The Royal Family began gathering in the room leading out to Buckingham Palace’s balcony as the Trooping the Color parade continued below before all gathered to witness an incredible flypast.

People have taken to Twitter and social media to express their joy at the Cambridge kids and comment on Charlotte’s sassy nature and gorgeous attire.

Another commented: ‘Ha ha #bossbaby at its best from #princesscharlotte becomes a fierce princess when she grows up, well cheeky’

A third posted: ‘Remi and I are delighted to be joining the Royal Ladies, for the first time but not the last HRH Princess Charlotte!! Charlotte wears a beautiful chiffon dress from Patachou. Charlotte was so sweet today!!’

And a fourth posted: ‘Thank God the beautiful Cambridge families are the future of the British monarchy! Prince George, Princess Charlotte and Prince Louis certainly stole the show today!’

‘Don’t get used to our pain’: Ukrainian First Lady appeals to the West