By Joe Davies for Mailonline

Scottish officials could be given a four-day reduced pay work week to deal with rising government bills.

The plans were published on Wednesday along with a spending statement by the Scottish government, which aims to plug a black hole estimated to be £3.5 billion.

The move presents an ‘opportunity’ to cut spending on salaries, officials said, but Scottish Conservatives labeled it a ‘fantasy’.

It comes after Boris Johnson warned British officials to endure the same cost cuts as families across the country, while defending his pledge to cut 91,000 of their jobs.

Scottish officials could be given a four-day reduced pay work week to deal with rising government bills. Pictured: Nicola Sturgeon during the Prime Minister’s questions in the Scottish Parliament on Wednesday 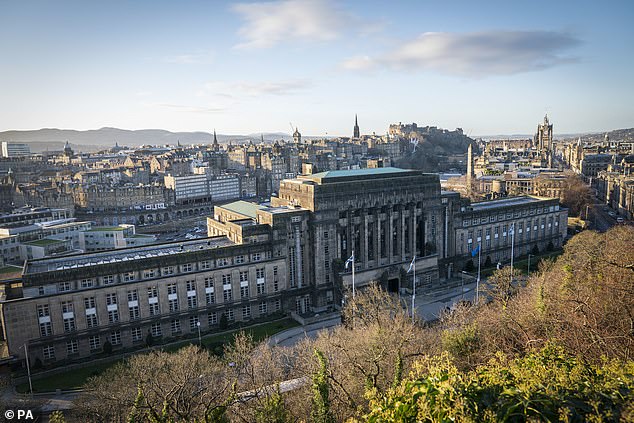 The plans were published along with a spending statement by the Scottish government, which aims to plug a black hole estimated to be £3.5 billion. Pictured: St Andrew’s House, Edinburgh, where approximately 1,400 civil servants work

The Scottish government said it is investigating the development of ‘unpaid benefits’, including the four-day working week.

It said: ‘Longer term, this could be an opportunity to reduce the cost burden of payroll awards for employers.’

Critics said reducing the hours of workers in the Scottish public sector would lead to a 20 per cent reduction in capacity for Scotland’s public services.

Unions have previously campaigned for a four-day workweek while maintaining wage levels, arguing that fewer hours would increase productivity.

Cat Boyd, the national official for the PCS union, said the new plans to cut wages by the hours are “ill-considered and downright insulting.”

She told the Daily Telegram: ‘In 2010 our members bore the brunt of budget cuts.

Now we are seeing threats of further wage cuts to the workers who are running Scotland during the pandemic.

“Any proposal involving a further loss of wages coupled with a cut in the number of hours represents more broken promises from the Scottish Government when it comes to their own staff.”

It is estimated that around 30,000 of Scotland’s 585,400 public sector jobs will need to be cut to return to pre-pandemic levels.

Kate Forbes, the SNP finance secretary, said it is “unsustainable” to continue increasing the workforce in the public sector.

A similar scheme for the public sector will be rolled out later this year, details of which have not yet been published.

But Liz Smith, the Scottish Tories’ financial spokeswoman, described the plans as a “cavalier economy” that would derail public services after the pandemic.

She said: “The SNP ministers are determined to continue with this nonsense,” which would further increase the spending black hole.