Queen: Girl who stood in line for 15 hours to pay respect, pushed aside by man who took coffin 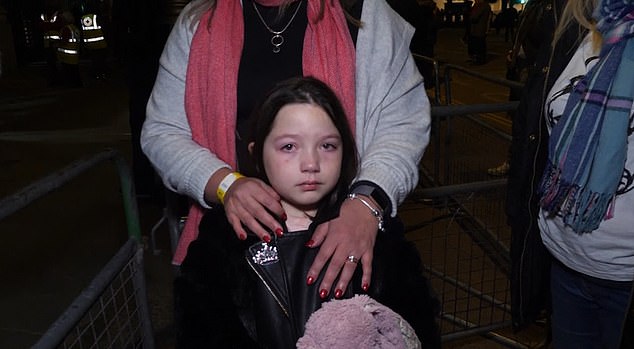 ‘She’s not okay at all’: Seven-year-old girl who had queued for 15 hours to honor the Queen was pushed aside by man who tried to grab coffin

By Alastair Lockhart and James Robinson for MailOnline

A seven-year-old girl has been left in tears and shock after a man pushed her aside to try to grab the queen’s coffin.

Young Darcy Holland queued for 15 hours to see the Queen with her Aunt Tracey, before finally reaching Westminster Hall.

Did you see the Westminster Hall incident or do you know the man involved?

Darcy was in the middle of the hall last night paying her respects to the Queen when the man pushed her and others in line and tried to lift the royal standard draped over the coffin.

It is thought that he was able to touch the coffin before being knocked to the ground by police officers as shocked bystanders watched. Shortly afterwards he was arrested.

Tracey Holland said Darcy was paying her respects to the Queen while she was trying to look at the crown when someone decided they would push her out of the way, run to the coffin, lift the stand and try to do it. don’t know what.

“Darcy was snatched out of the way and the police had him in two seconds.”

When asked if Darcy was okay, Tracey said, “No, not at all. We’re just trying to get her back in so she can walk around respectfully again because she’s been up since two this morning, she’s been in line for 15 hours and that’s his result.’

The Queen has been lying in state in Westminster Hall since Wednesday, as thousands queue all night for a chance to see the late monarch for one last time.

Darcy Holland, 7, queued for 15 hours to see the queen with her aunt when she was pushed by the man next to the queen’s coffin 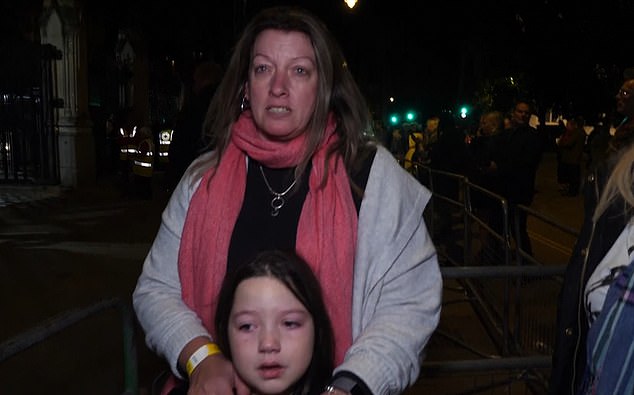 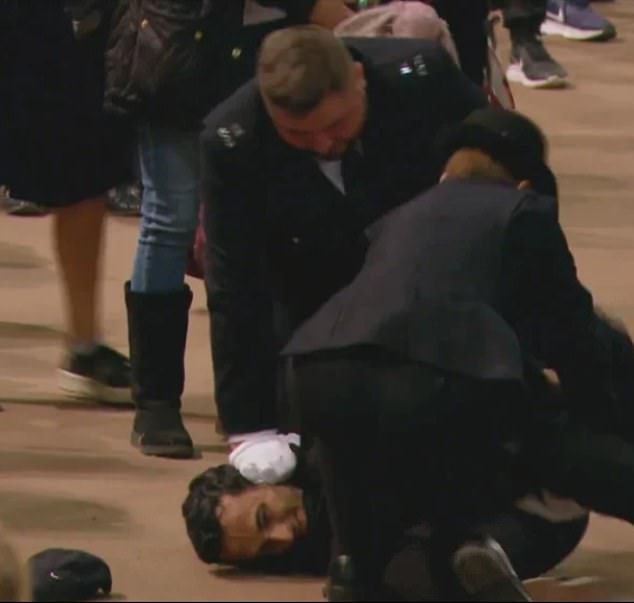 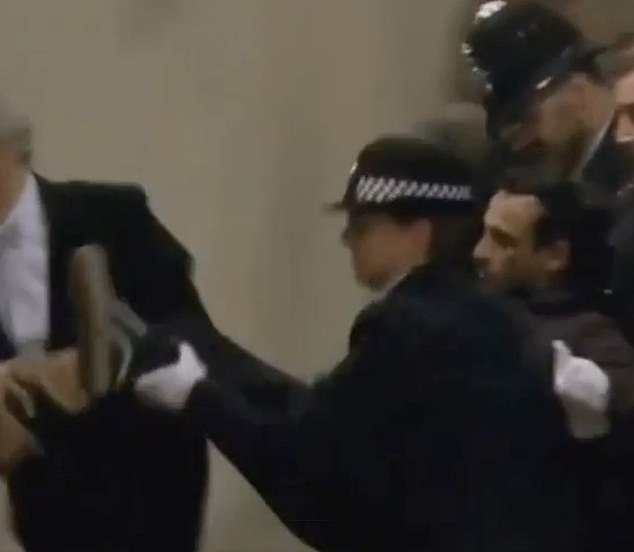 After the incident, which took place around 10 p.m. Friday, officers were seen carrying the man away from Westminster Hall

Hundreds of thousands of respectful mourners are said to have passed through the hall in the past two days, despite queues that can reach up to 24 hours.

But mourners were left visibly shaken during Friday night’s incident – which took place just hours after King Charles and his family held a vigil in the Queen’s honor.

Alongside siblings Anne, Andrew and Edward, the newly crowned monarch stood guard next to his mother’s coffin.

Another witness who saw the incident told MailOnline how a mourner “screamed” when she saw the man running towards the coffin.

The witness said: ‘We saw him (the man) in line from the beginning of the line and he was alone all day.

“When we entered the room, we were standing at the top of the stairs when we saw the incident. One lady screamed as it happened, it was quite unnerving. Although he was held and the people kept calm and carried on.’ 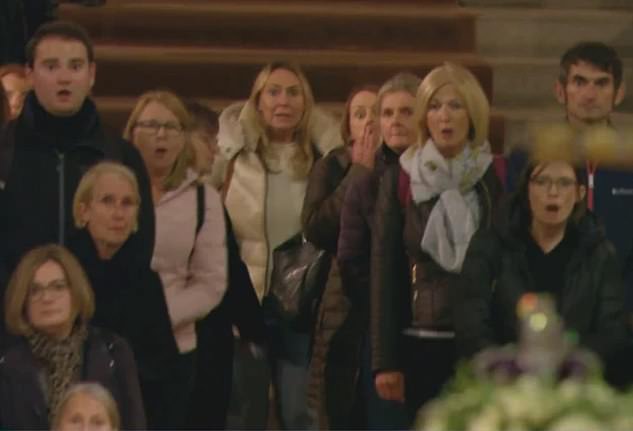 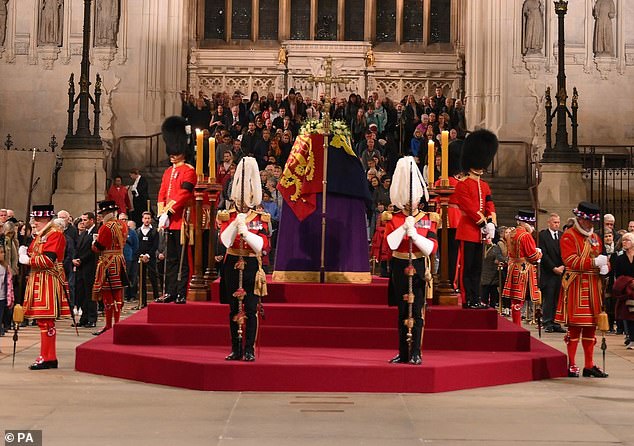 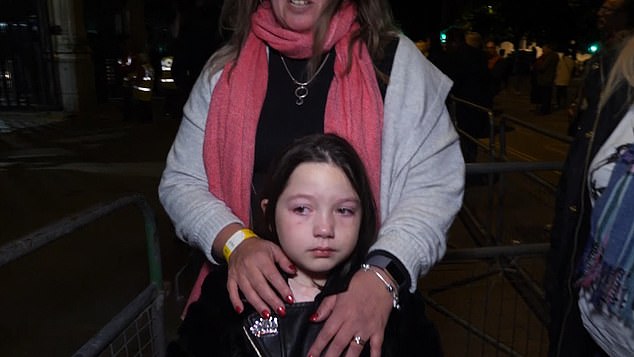 The schoolgirl was visibly shocked by the shocking incident in Westminster

The Metropolitan Police confirmed last night that a man has been arrested on suspicion of a public order violation.

A police spokesman said: ‘At 10pm on Friday 16 September, agents from the Met’s Parliamentary and Diplomatic Protection Command arrested a man in Westminster Hall following a disturbance.

“He has been arrested for a crime under the Public Order Act and is currently in custody.”

A spokesman for the UK Parliament said last night: ‘We are aware of an incident at Westminster Hall in which a member of the public walked out of line to the Catafalque.

“They have now been removed from the hall and the queue has started again.” 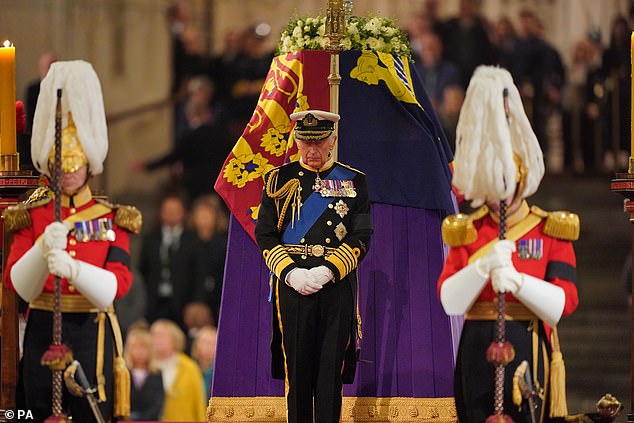 The mourners are said to have been left in shock during the incident, which took place hours after King Charles and his family held a vigil in the Queen’s honor. Alongside siblings Anne, Andrew and Edward, the newly crowned monarch stood guard next to his mother’s coffin (pictured)