RICHARD LITTLEJOHN: The Tories made a nuclear mistake by firing Boris Johnson 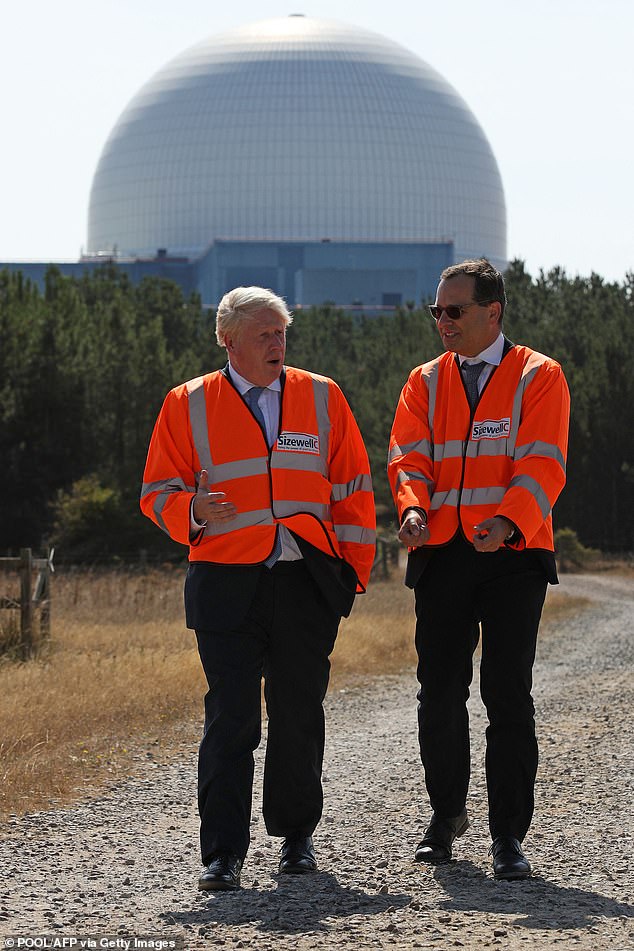 Go nuclear, go big. That pretty much sums up Boris Johnson’s career, when I think about it.

The first face I saw when I turned on the TV news yesterday morning was that of the outgoing Prime Minister.

He held a press conference at the Sizewell power station outlining the government’s plans to tackle the energy crisis. For a moment I wondered if he had changed his mind and decided not to resign after all.

Boris was in full boosterism mode. Its ‘go nuclear, go large’ fanfare heralded the announcement of a £700m investment in capacity expansion at Sizewell. He looked relaxed, refreshed and ready for battle. But oddly enough, he’s gone Monday night.

This was Boris’ farewell performance as Prime Minister and he was determined to milk it. He said it would be “absolute madness” not to invest in nuclear energy, given the global havoc on oil and gas markets caused by Putin’s war on Ukraine.

Boris was in full boosterism mode. Its ‘go nuclear, go large’ fanfare heralded the announcement of a £700m investment to expand Sizewell’s capacity

Defending his record, he said: “This government has not shied away from the big decisions, we have raised our eyes and looked to the horizon.”

Sizewell C fits Johnson’s enthusiasm for big projects – along with broken brainwaves such as the proposed tunnel under the Irish Sea and the international airport on an island in the Thames Estuary.

To those graciously shelved plans, we must add his two greatest triumphs, Brexit and the global Covid vaccine program.

Any of these should have been enough to secure his legacy and ensure that he led the Tories into the next general election. But, tragically, to invert Oscar Wilde’s famous quote: As Boris looked to the stars, others were determined to drag him into the gutter.

BoJo is often described as his own worst enemy. While it’s true that his tendency to go nuclear has often led to a Chernobyl-style meltdown, not all of his misery has been caused by himself.

Yes, his attempts to manipulate the Commons default system in defense of fellow Brexit MP Owen Patterson, who was caught taking money from corporations to lobby ministers, was a terrible mistake. 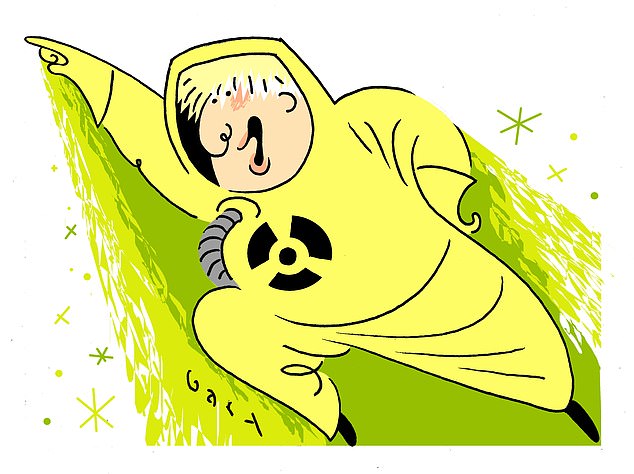 So did, in retrospect, his decision to circle the wagons around his Svengali, Dominic Cummings, who drove to Barnard Castle at the height of the first Covid lockdown “to test his eyesight.”

As with Patterson, Boris acted out of misplaced loyalty. And it backfired spectacularly in the case of Cummings who, after a falling out with Carrie Antoinette, retaliated by leaking a series of damaging stories as soon as he left No 10.

Boris also turned a blind eye to after-hours drinking by Downing Street staff during the lockdown, causing him to ‘inadvertently mislead parliament’ – now elevated to a heinous crime by the pygmies on the Commons Privileges Committee, who are determined to strike a strike through his heart.

None of this should have been enough to force him out of office, especially not the ridiculous insistence that he resign because an obscure member of his government had been caught drunkenly groping the buttocks of two men at the Carlton Club. We’re not talking about Watergate here.

Yet Johnson’s enemies were willing to seize any alleged sin, no matter how small, to destroy him, aided and abetted by the civil service and pro-EU broadcasts.

Recalcitrant Remainers have never forgiven him for leading the successful Leave campaign. And make no mistake, it was both a personal and a political triumph.

Speaking as a lifelong opponent of a federal Europe, I cheerfully admit that Nigel Farage deserves credit for forcing the referendum. But it wasn’t until Boris jumped on board that I became convinced that we were in with a scream to win.

The victory was due in large part to the sheer strength of Boris’ personality. You just had to watch the crowd, especially in the Red Wall seats in the North and Midlands, react to him with warmth and enthusiasm.

It was the same story in 2019, when he led the Tories out of the doldrums and returned to power with what we then believed to be an unassailable majority of 80 seats.

The conservative landslide was the closest Britain has seen to a US presidential mandate. Which makes it all the more sickening that so many Tory MPs who owe their seats to Johnson turned against him when it came down to it. 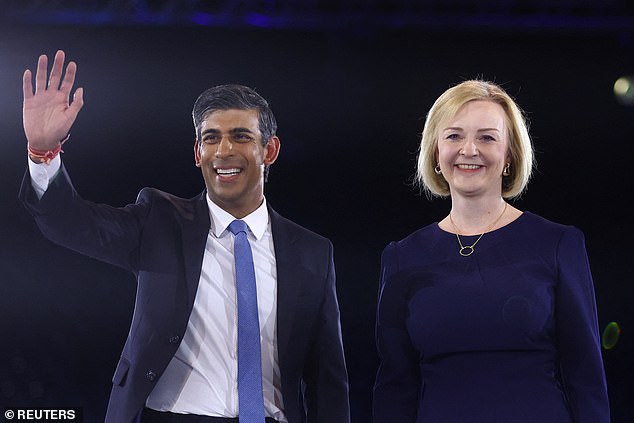 When he was forced to resign, I suggested that Conservative MPs convert at their leisure. Whatever Fizzy Lizzie’s qualities, she will never connect with voters in the same way as Boris

If he were to be taken out of No. 10, it should have been by the electorate that put him in office, not thanks to a petulant palace revolution by ambitious Conservative MPs, driven by petty resentment and a panicked grasp of self-preservation.

In the US, voters elect the president. In the UK, the Prime Minister can be impeached by the parliamentary party.

Strange to think that if the British and American systems were reversed, the crippled President Joe Biden would now be gone and Boris would still be there.

In fact, Boris should have gotten the job in 2016 when Call Me Dave threw in the towel after backing the wrong horse in the referendum. But the typical self-destructive Tory struggle put the kibosh on it and ushered in the disastrous Mother Teresa era from which Boris eventually had to rescue us.

Just think, if he had become Prime Minister then, as I wrote a few weeks ago, Brexit would have been done and dusted years ago.

We’d had no Gina Miller, no swirling gargoyle Bercow trying every trick to stop Brexit, no Northern Ireland Protocol. And if Remainers had tried to derail our withdrawal, Boris would have just gone into the country and achieved the kind of majority he secured in 2019.

Besides, he would probably be gone by now. His misfortune was that he ended up in number 10 when Covid struck. Nobody saw that coming.

Yes, he made mistakes during the lockdown. But you have to consider the reality that he almost died of Covid and lost his mother during the pandemic.

In contrast, he defied conventional wisdom to trample on the usual risk-averse suspects and ensure Britain became the first country to roll out a mass vaccination program. For once, the overused hyperbole “world storming” was justified.

That, and Brexit, he deserves to be judged on, no fluff and nonsense about wallpaper and prosecco.

His obsession with the devastating ‘net zero’ agenda should be placed firmly in the ‘goals against’ column. But yesterday, while he still didn’t fully endorse fracking or the continued use of fossil fuels, he at least acknowledged that nuclear power was our long-term way out of the global energy crisis, despite opposition from the Thunberg trend.

Frankly, Boris seemed more at ease at Sizewell yesterday than at any time since February 2020, when Covid struck. Maybe that’s because the yoke has been lifted.

But it’s been a wasted summer, weeks at the end of the Tories tearing lumps apart in an utterly unnecessary leadership contest.

It looks pretty certain that Fizzy Lizzie will be our next Prime Minister and we should wish her good luck for all of us. But I wondered what the Tory MPs who voted to get rid of Boris thought of his performance.

He was confident, fluent, joshing with reporters. Old Boris was back and, frankly, still head and shoulders above the hypocrites.

When he was forced to resign, I suggested that Conservative MPs convert at their leisure. Whatever Fizzy Lizzie’s qualities are, she will never connect with voters in the same way as Boris.

Throughout his career he has painted himself in a corner, only to walk confidently over the paint. He got away with scratches and scandals that lesser mortals would have buried.

I’m sure he could have done that again. He would have stumbled through the cost of living crisis just as he was grappling with Covid and would almost certainly have won another, albeit diminished, majority – especially given the dire alternative of a Starmer-led Labour/Lib Dem/SNP- attachment.

So could the Tories ever plead: come back Boris, all is forgiven? Probably not, but you never know. We’ll have to wait and see if he decides to go nuclear again.