ROBERT HARDMAN: What must the Queen have loved about that cheeky horse racing gag?

Well hallelujah. The prodigal son and his wife finally rejoined the royal family in public yesterday – and everyone found something to laugh about.

While the Queen’s absence from her own national thanksgiving service had tarnished some of the brilliance of the work at St Paul’s Cathedral, the Archbishop of York, the Reverend Stephen Cottrell, used his sermon to address the Sovereign as if she were there— knowing full well that she was watching on television.

And he hit just the right note when he used an equestrian analogy to sum up the record-breaking reign of our horse-mad monarch. The Archbishop noted that the scriptures describe life as a race—and that we were only a day from the Derby—and noted, “Your long reign reflects Aintree’s distance more than Epsom’s sprint.”

He continued, “Your Majesty, we are sorry you are not with us this morning. But we’re so glad you’re still in the saddle. And we’re glad there’s more to come. So thank you for sticking to the lesson.’

That caused wide smiles across the royal ranks. They sat grinning in row one dome to the south, where the Prince of Wales and the Duke of Cambridge sat with their husbands. And there was a smile down the aisle in row two, dome to the north, where the Duke and Duchess of Sussex sat between the daughters of the Duke of York and the Queen’s niece, Lady Sarah Chatto.

While much of the Twitter sphere will now be engaged in the usual Sussex-centric screaming contest over who snubbed who, there’s one point beyond dispute: Harry and Meghan enjoyed the Archbishop’s racing gag as much as the Cambridges, the Wessexes, the Princess Royal and all the others.

This was the event that many had confidently predicted would top the Queen’s list of anniversary priorities. But her trip to London the day before, for the Birthday Parade, had caused her enough ‘discomfort’ to stay in Windsor. From my spot in the cathedral, looking straight down at where she would have been, it wasn’t hard to see why. Quite apart from the fact that there wasn’t a route to her seat that wouldn’t involve a brisk walk on live television, she wouldn’t have been able to step out discreetly and with dignity had she suddenly felt the need.

It’s one thing to show up on a balcony for a few minutes and then go back in when you feel like it. However, a long church service would have been unpleasant. And as the Queen once remarked—to her then Archbishop of Canterbury, Robert Runcie—”I don’t think you should ever leave a Christian service feeling sad.”

Besides, as the Supreme Governor of the Church of England, she would hate to attend a service without standing or praying at the right times.

However, given the upbeat atmosphere of the occasion, it still felt like she was there in spirit after all. The mood was good from the start. It was not hard to detect a sense of relief among the palace officials that the Almighty had chosen to send the Archbishop of York, but not its Duke—who, we were told, was home with a non-threatening dose. covid. 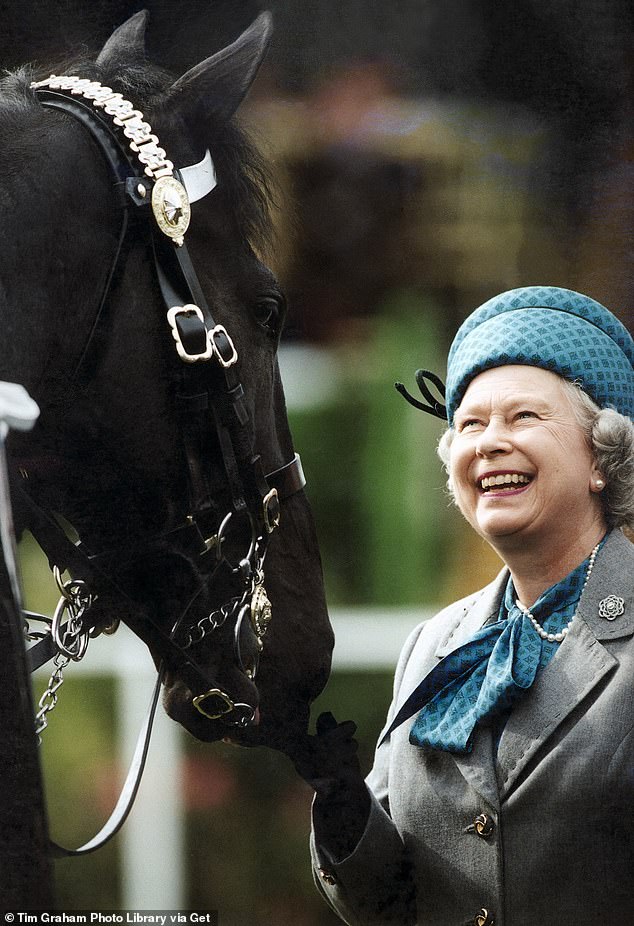 Her Majesty, pictured here judging mounted troops at the Royal Windsor Horse Show, has a known love of horses

There was certainly an unusual amount of cheerful pink on display. The Queen’s granddaughter, Zara Tindall, was dressed in a cheerful fuchsia outfit, paired with her husband Mike’s tie.

The Countess of Wessex, several Kents, Home Secretary Priti Patel and Scottish Prime Minister Nicola Sturgeon were all in vibrant shades of pink. All of the Queen’s living British Prime Ministers were here too. Theresa May was in dark green, while among the men Sir John Major and Boris Johnson had opted for morning attire, as members of the Royal Household. Tony Blair, Gordon Brown and David Cameron were all in lounge suits. There seemed to be a lot of jokes and pats on the back in that pew. I hadn’t seen such a happy Blair/Brown ash since those pre-millennium days of Cool Britannia.

All these politicians and the chiefs of services sat right in front of the beautiful new Remember Me porch, the national monument to all those who died as a result of the Covid pandemic and completed thanks to the generosity of the Daily Mail readers. Once everyone was inside the cathedral, the mighty oak doors of the portico closed. It really is a worthy addition to Wren’s behemoth.

As this would be the first public sighting of the Sussexes together on British soil in over two years, the choreography of the arrivals was more than usual fascinating.

Most of the royal family had come by coach – including the Tindalls – but there were separate Royal Mews vehicles for those higher up in the royal pecking order. The Earl and Countess of Wessex had been given a livery Rolls-Royce bearing the royal coat of arms. Although they were closer to the throne, the Sussexes could hardly complain that they were only allocated a Range Rover. For just ahead of them, Princesses Beatrice and Eugenie, plus husbands, arrived in a Mercedes van.

When the Sussexes went in, everyone — family and clergy alike — seemed determined to welcome them. Vigorous handshakes were the order of the day. Also, they were not allowed to be led down the aisle in a group of second-class royals. They had their own little procession with their own messenger, and a very distinguished one too. Lieutenant Colonel Sir Alexander Matheson of Matheson, formerly of the Coldstream Guards, is also the Clan’s 28th Chief. In addition, he was the man responsible for the inaugurations at Buckingham Palace. In other words, let there be no whining about insults from the establishment in the next authorized Sussex biography.

There was certainly a shiver of excitement as they walked down the aisle, with each row of the congregation taking turns taking double shots and ‘oooh’ faces as the couple passed them. 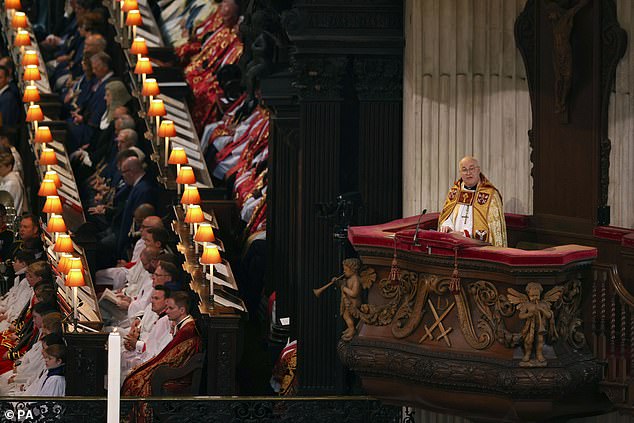 They held hands all the way, only breaking off to navigate on either side of a huge copper grid and then clamping back on the other side.

The Lord Chamberlain’s office, which arranges seating at these events, had secured a super-secure seating for the couple in row two, just behind the Duke and Duchess of Gloucester. Meghan sat next to Lady Sarah, one of the most popular, humble and trustworthy members of the family who had accompanied her husband Daniel and two sons, Sam and Arthur. The latter, who had recently joined the Royal Marines, was the only member of the extended royal party in uniform. The Duke of Sussex, meanwhile, was sitting between his wife and his tenant, Jack Brooksbank, Princess Eugenie’s husband. The Brooksbanks and their son have been babysitting the house at Frogmore Cottage lately.

The entry of the senior royal party can only be described as awe-inspiring. The combined talents of the organist at St Paul’s, William Fox, the Band of the Royal Marines and the Band of the Coldstream Guards produced a superb amalgamation of organ, brass and percussion as the Prince of Wales and Duchess of Cornwall, along with the Cambridges processed with the clergy. The choice of music made it all the more electric. The choirs of St Paul’s and the Chapel Royal sang John Rutter’s arrangement of Charles Hubert Parry’s ‘I Was Glad’, with his abrupt cry of ‘Vivat Regina Elizabetha!’

These were, of course, the opening words of the Queen’s coronation. Every part of this service, remember, had her personal endorsement.

Devotion to duty was the recurring theme of this occasion. The cathedral was full of people of whom the same could be said. The palace had kept the big and the good to a minimum and had invited hundreds of people who had received awards – mainly MBEs and OBEs – during the pandemic.

As the Archbishop reminded us just before Aintree’s parable: “In Her Majesty we see an example of this kind of service; a firm steadfastness and a firm consistency.”

When I saw the Prince of Wales and the Duchess of Cornwall emerge side by side in the sun as the service ended – he in morning dress and she in ivory – I was suddenly reminded of an occasion when the Queen herself had used a racing joke on an important to make a point. It was the day of the Prince’s wedding to the Duchess in Windsor in 2005. At the time, the monarch stepped forward to toast the newlyweds. She, too, compared life to Aintree’s challenges before realizing that the happy couple had now entered the “winner’s abode.”

Even without Her Majesty in our midst, this still felt like an equally happy and historic day.