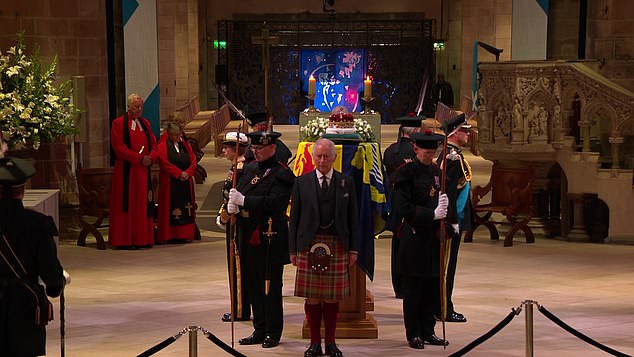 Royal fans sympathize with King Charles after noting that the new monarch looked ‘devastated’ at a vigil for Queen Elizabeth tonight.

All four of Her Majesty’s children gathered around her coffin today in a poignant vigil at St Giles’ Cathedral in Edinburgh.

After a short procession, King Charles III, Anne, the Royal Princess, Prince Andrew and Prince Edward each took their place on one of the four corners of the oak coffin with their heads bowed in a ceremony known as the Vigil of the Princes .

The Duke of York kept his eyes closed for a while during the 20-minute vigil, while the Princess Royal and the Earl of Wessex kept their eyes on the ground.

King Charles and his siblings held a vigil at Queen Elizabeth’s coffin, which is currently in Edinburgh’s St Giles Cathedral 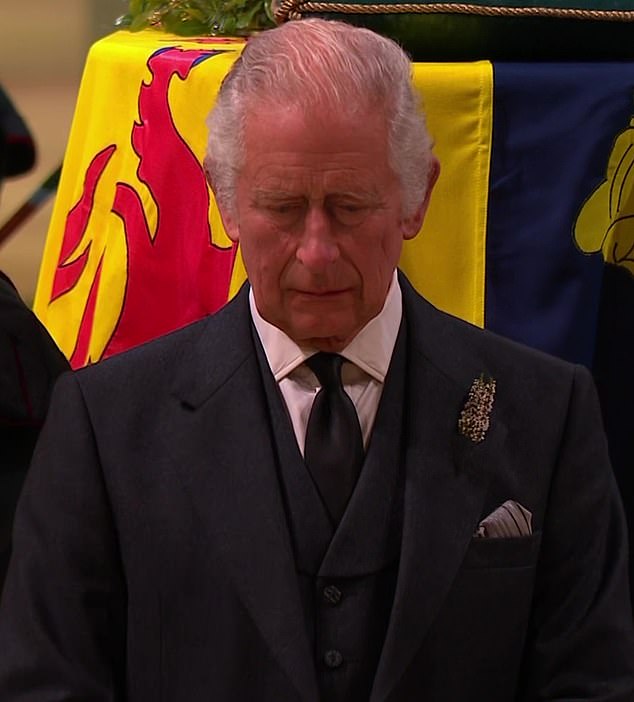 King Charles, who seemed to have tears in his eyes at times, held his hands together and also looked at the floor as the audience streamed by.

A royal guard wrote: ‘King Charles looks absolutely devastated, this must be the hardest thing for all of them.’

A second commented, “Charles looks absolutely heartbroken. He’s had such a busy few days that he literally didn’t have time to grieve.”

Another commenter Tweeter said: “Charles looks utterly bereft as he undertakes the Vigil of Princes. Imagine having to mourn in public. No, thank you.’

Another agreed and replied, “I’ve been thinking about how heartbroken he looked all the time.”

Meanwhile, another Twitter user thought the moment should have been private, writing: ‘The guards/police could and might have stopped the public from walking through, to let the family watch privately. King Charles III looks heartbroken. This should not have been on TV. It should have been a private moment behind closed doors.’ 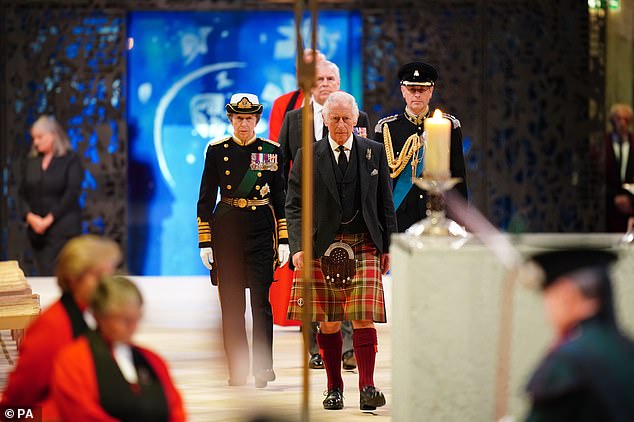 The King and his family began their vigil at the coffin at 7:46 PM and ended at 7:56 PM. They see them arriving at the church 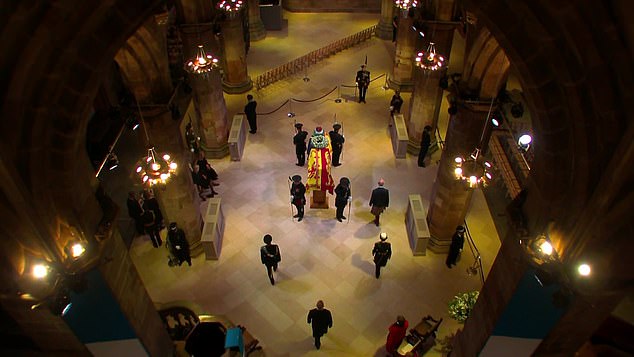 An aerial view showing the Queen’s four children walking down the aisle from St. Giles’ Cathedral to the Queen’s casket 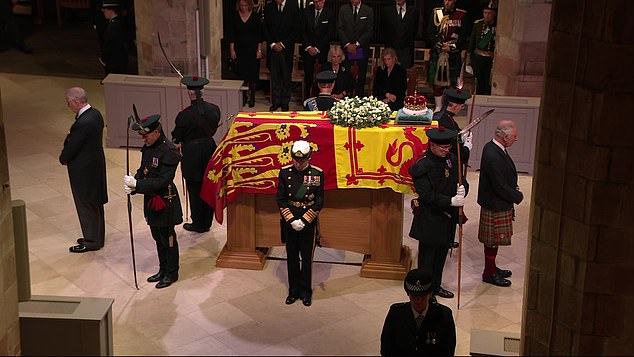 The Duke of York kept his eyes closed for a while during the wake, while the Princess Royal and Earl of Wessex kept their eyes on the ground 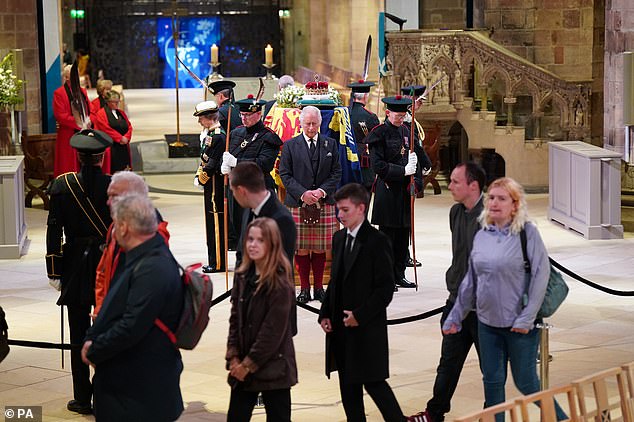 Members of the public – who have gathered around the coffin by the thousands all afternoon – were briefly stopped to allow the royal family to take their place. However, they kept going once the vigil started, giving them an extraordinary perspective on the historic moment 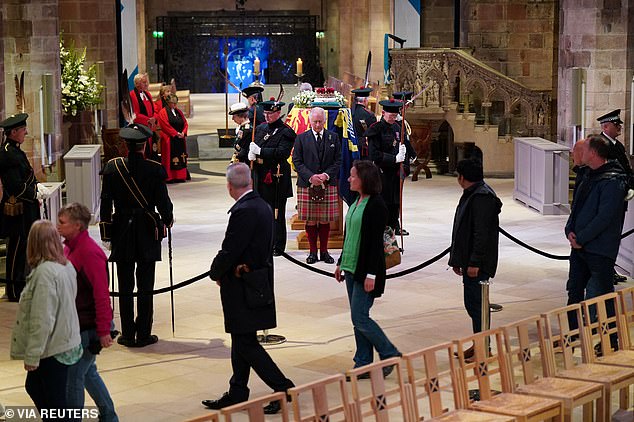 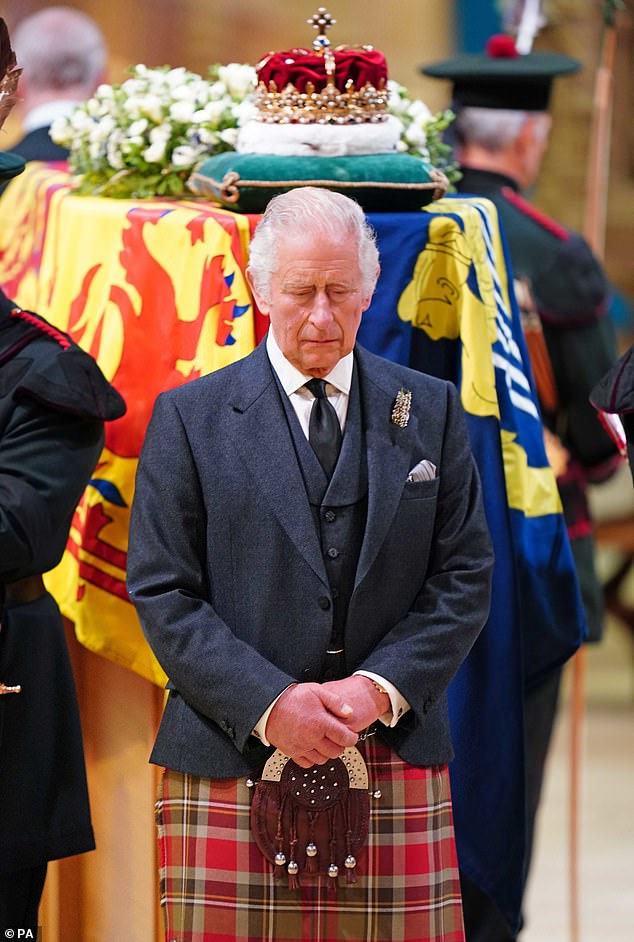 King Charles, along with his three siblings, stood beside four members of the Royal Company of Archers in suits, who stood guard, clad in long-feathered hats and armed with arrows and quivers, while Camilla, the queen consort, watched from a distance.

Members of the public – who have gathered around the coffin by the thousands all afternoon – were briefly stopped to allow the royal family to take their place.

However, they kept going once the vigil began, which gave them an extraordinary perspective on the historic moment.

Several members of the audience bowed as they passed the king, while others passed solemnly with their heads bowed.

Royal viewers took to Twitter to share their thoughts on the wake, with many commenting that King Charles looked ‘heartbroken’

The tradition of holding such a vigil has been honored since the death of King George V in 1936, with Princess Anne today being the first female royal to attend.

Tens of thousands of Scots paid their respects to the Queen all afternoon after queuing for hours through the streets of Edinburgh.

The royals were cheered and cheered by benefactors as they exited the west door of the church in the darkness of the evening.

The Queen will lie in state for 24 hours before being flown to London tomorrow for the funeral at Westminster Abbey on Monday, September 19.