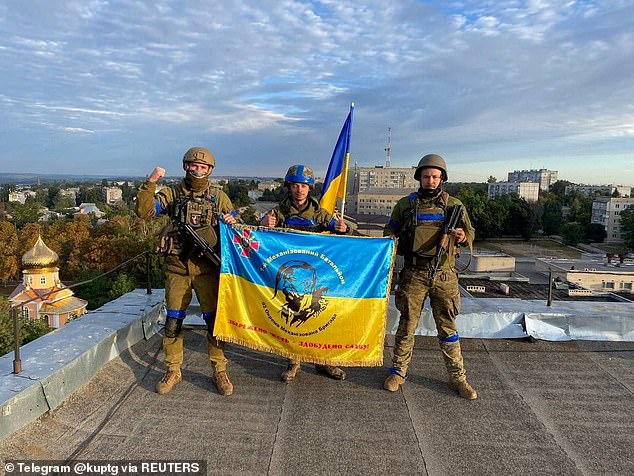 Russian lines in eastern Ukraine are crumbling as Ukrainian forces make staggering gains to liberate their homeland, with the Russian Defense Ministry admitting the magnitude of the collapse.

The offensive south of Kharkov, which began on Tuesday, surprised thinly defended Russian lines, leading to reports of mass withdrawals, mass surrenders and mass casualties that the Russian Defense Ministry has dressed as a “regroup.”

Russian Defense Ministry spokesman Igor Konashenkov said on Saturday that troops will be regrouped from the Balakliya and Izyum areas into the occupied Donetsk region of Ukraine.

Izyim was an important base for Russian troops in the Kharkiv region, and earlier this week videos on social media had the residents of Balakliya cheering as Ukrainian troops moved in.

Konashenkov said the Russian move is being taken “to achieve the stated goals of the special military operation to liberate Donbas,” one of the regions of eastern Ukraine that Russia has declared sovereign. 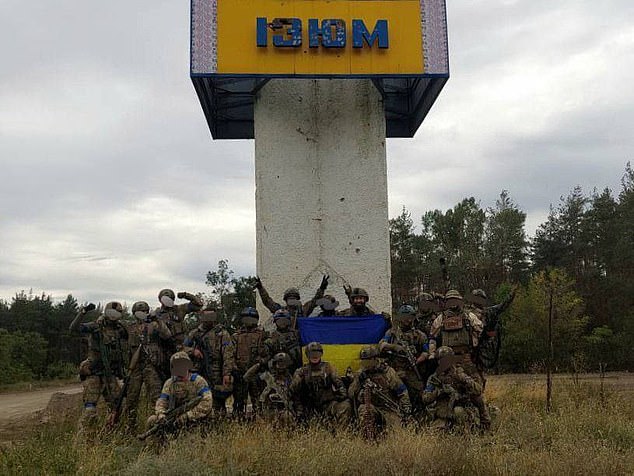 Ukrainian soldiers pose for a photo under the sign of Izium, an important logistics hub and prize-recording 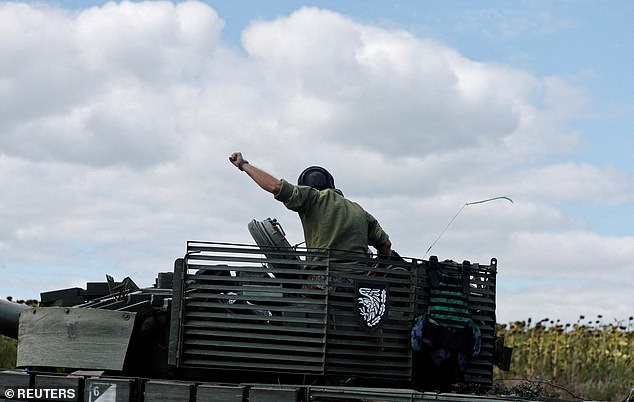 The withdrawal claim to focus on Donetsk is similar to Russia’s justification for withdrawing its troops from the Kiev region earlier this year when they failed to take the Ukrainian capital.

The news is confirmation of stunning battlefield successes for the Ukrainian armed forces, which have liberated nearly a thousand square miles of Russian-occupied territory, according to Washington DC-based think tank the Institute for the Study of War.

The area includes the main strategic and logistical hubs in Izium and the city of Kupiansk, which in reality will endanger Russia’s entire position in the Donbas.

Ukrainian Foreign Ministry spokesman Oleh Nikolenko also said Ukrainian forces have recaptured Kupiansk, a town along the main supply route to Izyum, which has long been targeted at the Russian frontline and the site of heavy artillery and other fighting.

Nikolenko tweeted a photo of soldiers in front of what he believes was a government building in Kupiansk, 75 miles north of Izyum.

The latest reports point to fighting around the town of Limán, just 40 miles from the twin cities of Lysychnask and Severodonetsk, which fell to Russian forces in early July after a long, drawn-out battle.

Denis Pushilin, the head of the separatist People’s Republic of Donestk, reported on the fighting amid rumors that he had fled Donetsk.

The situation in Limán “remains quite difficult,” he said in a video post from a moving car. “Just like a number of other locations in the north of the republic.”

And Serhiy Haidai, the Russian-installed governor of the Luhansk region, said Ukrainian units had even reached the outskirts of Lysychansk itself.

‘Lysychnask, a large Ukrainian city. There will be a lot of reconstruction work,” he said in a cryptic message. 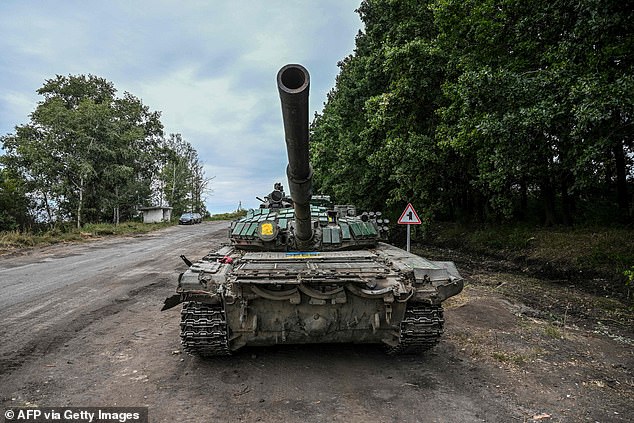 A captured Russian tank near Balakliya, Kharkiv region, after Russian troops ran away, leaving behind their weapons and equipment 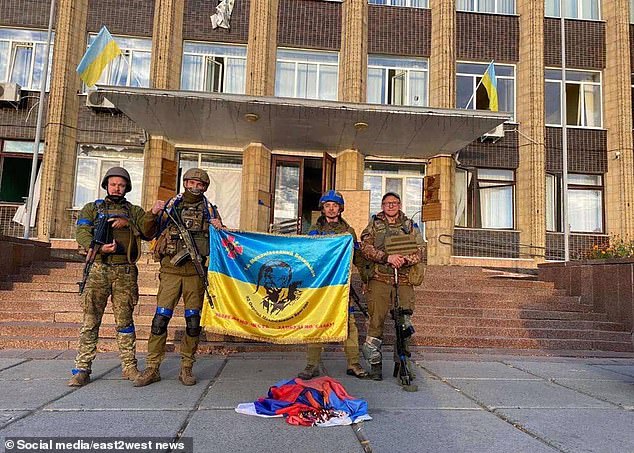 This morning, Kiev soldiers were pictured with their own country’s flag claiming to have recaptured Kuyansk – something Russia disputes

There are even unconfirmed reports of Ukrainian troops entering Donetsk International Airport, the subject of two separate battles between Ukrainian and pro-Moscow forces in 2014 and 2015.

Earlier Saturday, the British Ministry of Defense told reporters that Russian forces were likely surprised by the speed, scale and ferocity of the Ukrainian attack.

“The sector was only lightly occupied and Ukrainian units captured or surrounded several cities,” the British military said, adding that the loss of Kupiansk would have major consequences for Russia’s supply lines.

The Institute for the Study of War said it appeared that “disorganized Russian forces (were) caught in the rapid Ukrainian advance.” They cited images on social media of apparent Russian prisoners seized during the advance around Izyum and surrounding towns.

The same report, now seemingly outdated, said Ukrainian forces could collapse “Russian positions around Izyum if they sever Russian ground lines of communication” north and south of the city.

Vladislav Sokolov, head of the Russian-appointed local administration, said on social media that authorities in Izyum have begun evacuating residents to Russia.

The fighting in eastern Ukraine is taking place amid an ongoing offensive around Kherson in the south. Analysts suggest Russia may have brought soldiers from the east to fortify around Kherson, giving the Ukrainians a chance to attack a weakened front line.

Ukrainian Defense Minister Oleksii Reznikov told Ukraina television channel that the Russians had no food or fuel for their troops in the area because Kiev had cut off their supply lines.

“It will be like an avalanche,” he said, predicting a Russian relapse. “One line of defense will shake and he will fall.” 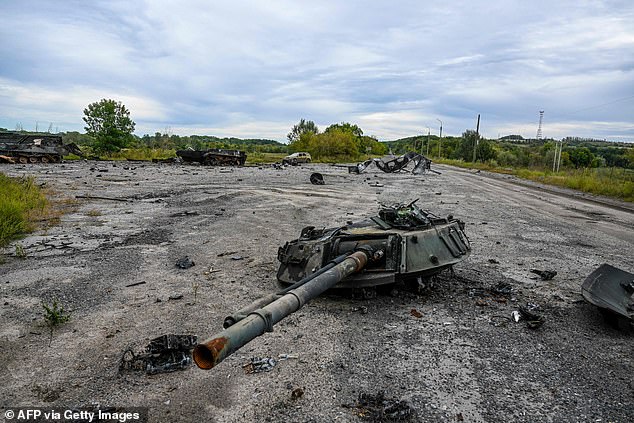 The Ukrainian military was more cautious about reported gains, claiming to have taken “more than 1,000 square kilometers” (386 square miles) from pro-Kremlin forces on Saturday this week. It said “in some areas, units of the armed forces penetrated to a depth of 50 kilometres,” which is in line with the British assessment, but did not disclose geographic details.

Officials in Kiev have silenced plans for a counter-offensive to retake the area overrun by Russia early in the war for weeks, urging residents not to share information on social media.

However, Ukrainian President Volodymyr Zelenskyy said on Friday that Ukrainian forces have reclaimed more than 30 settlements in the Kharkiv region since the counteroffensive began.

“We are gradually taking control of more settlements and returning the Ukrainian flag and protecting our people,” Zelenskyy said.

He spoke after the Ukrainian governor of Kharkiv reported that the national flag had been hoisted over Balakliia, a city recaptured by Ukrainian forces on Thursday after six months of Russian occupation.

Balakliia is Ukraine! Today, together with the army, led by the commander of the ground forces Oleksandr Syrskyy, we raised the Ukrainian flag,” Governor Oleh Syniehubov wrote on Telegram.

Elsewhere, Ukrainian emergency services reported that a 62-year-old woman was killed in a Russian rocket attack in the Kharkiv region when her house was razed overnight.

Syniehubov also accused Moscow of beating up settlements recaptured by Kiev. He said in a Telegram post that five civilians in the Izyum district had been hospitalized while nine others were injured elsewhere in the region.

In the disputed Donbas region south of Kharkiv, the Ukrainian governor said civilians had been killed and wounded overnight by Russian shelling near the town of Bakhmut, a prime target of the stalled Russian offensive there. Pavlo Kyrylenko said on Telegram that two people were killed and two more injured in Bakhmut and the neighboring village of Yahidne.

Meanwhile, German Foreign Minister Annalena Baerbock arrived in Kiev on Saturday on an unannounced visit, and said Europe would not tire of helping Ukraine, despite Russian President Vladimir Putin’s efforts to increase pressure by the countries of to deprive the European Union of energy.

Baerbock said Germany will assist Ukraine in finding and removing mines and other unexploded ordnance left by Russian forces in areas driven back by Ukrainian forces.

Despite the Ukrainian armed forces’ gains, US Secretary of State Antony Blinken and the head of NATO warned on Friday that Ukraine’s fight against Russia looks set to take months.

Blinken said the war was entering a critical period and urged Ukraine’s western supporters to maintain their support during what could be a difficult winter.

William Glendinning, 18, killed after off-road buggy flips on him while riding on…