Russian rockets slam into apartments in Ukrainian city of Zaporizhzhia

At least two people have been killed, five trapped, and several others injured including a three-year-old girl after Russian rockets slammed into the Ukrainian-held city of Zaporizhzhia overnight.

Seven Russian rockets struck the city overnight, destroying residential buildings including an apartment block which was cut in half as people slept inside – leaving many of them buried in the rubble.

The strikes, which Kyiv has said are a twisted kind of revenge by Putin’s commanders for losses on the battlefield, came just hours after President Zelensky announced the liberation of more villages from Russian control.

Meanwhile Russian propagandists appeared to be laying the groundwork for more losses in the region – with one telling state news agency TASS that Kyiv’s men are likely preparing to seize the Zaporizhizhia nuclear power plant after being trained for the raid by British special forces.

Firefighters extinguish a blaze in an apartment block in the city of Zaporizhzhia, in central Ukraine, after at least seven Russian rockets hit the city overnight – killing at least two people 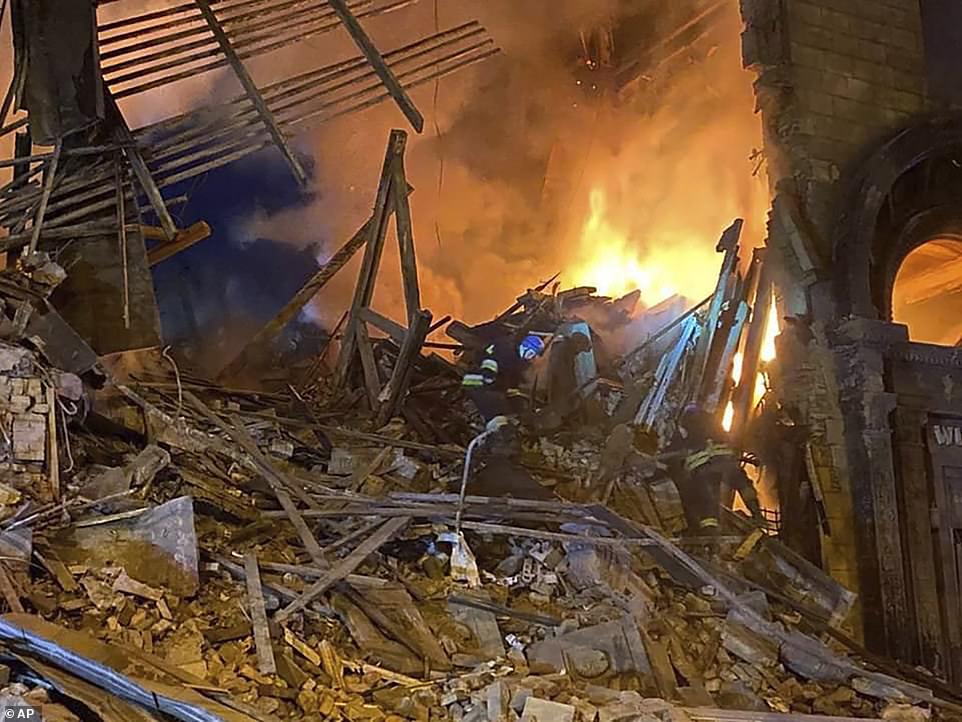 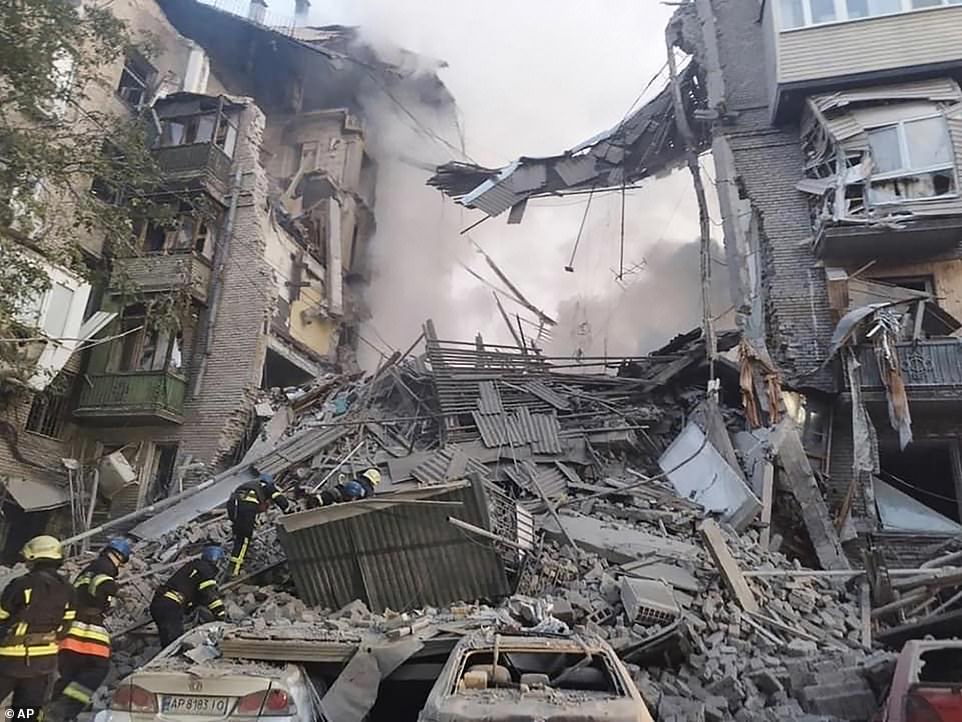 Fire crews search the rubble of an apartment building destroyed by Russian rockets in Zaporizhzhia, which has come under heavy bombardment as Putin’s forces are pushed back on the battlefield 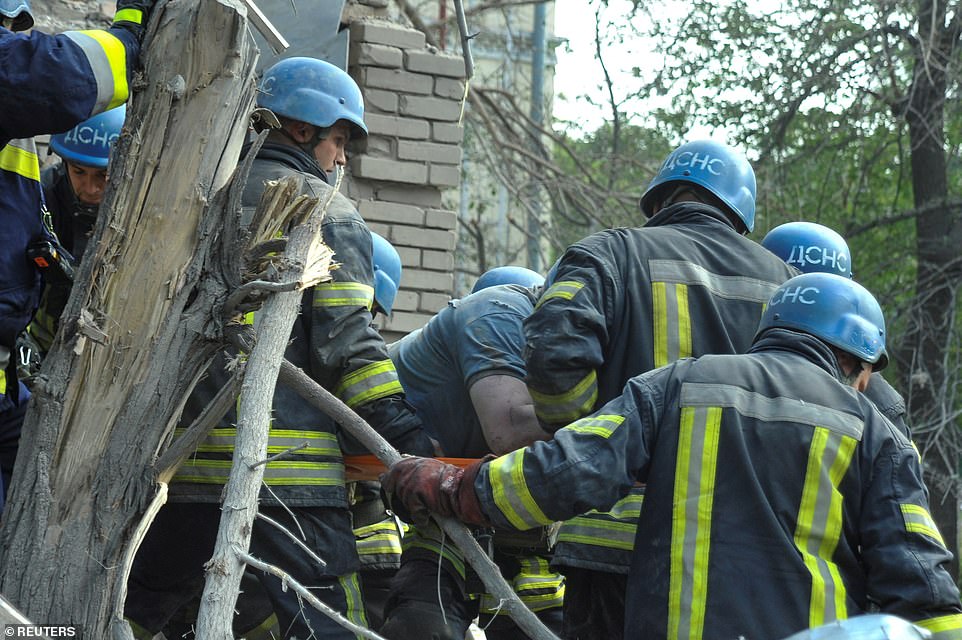 Ukrainian emergency crews help a wounded man out of an apartment block in the city of Zaporizhzhia, after it was destroyed by a Russian rocket that hit overnight 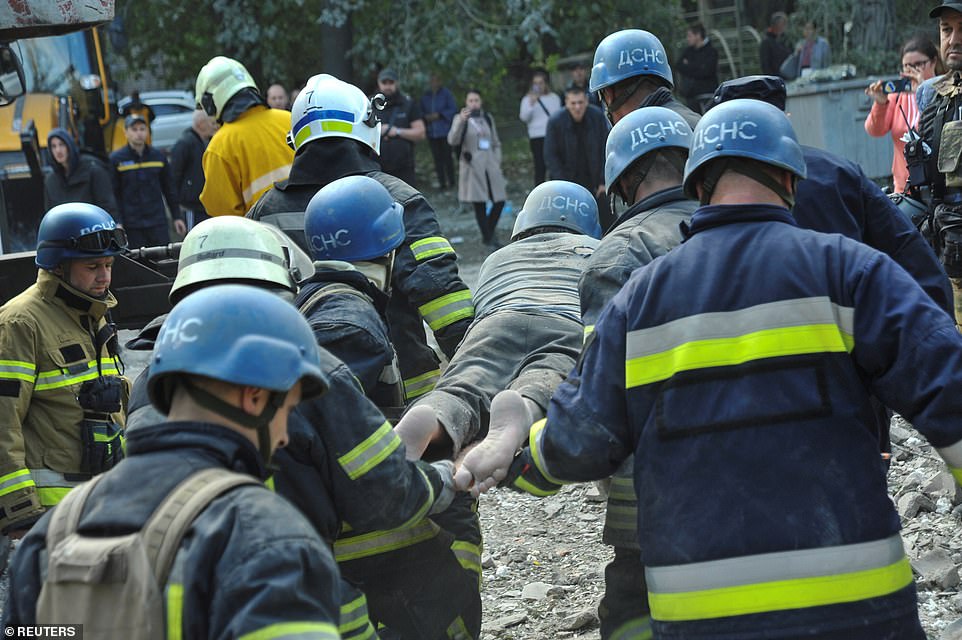 An injured man is carried away by emergency crews after being rescued from his destroyed apartment, with Ukraine saying that a three-year-old girl is also among the wounded 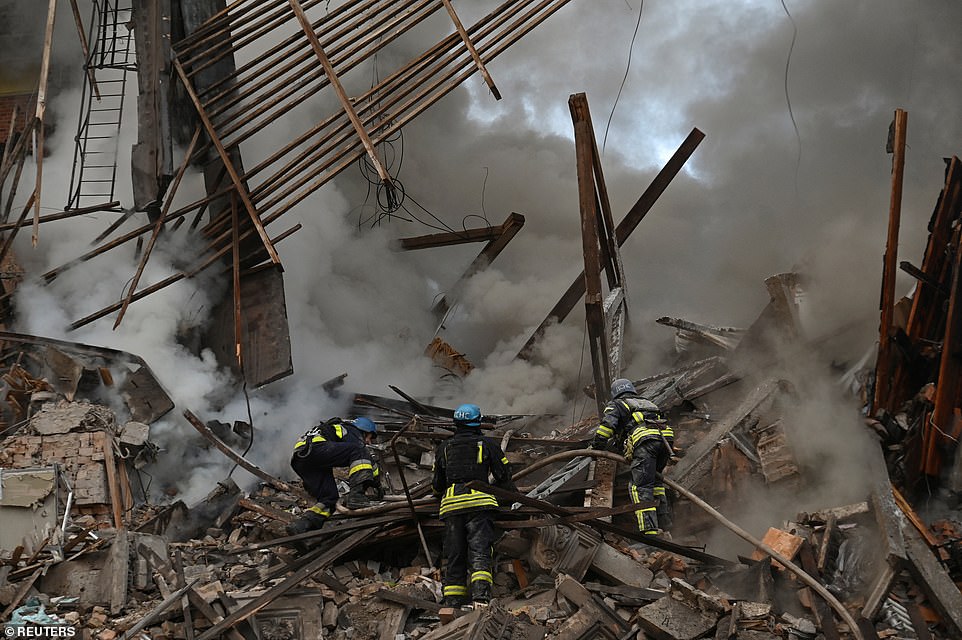 Ukrainian firefighters douse flames inside an apartment block that was partially destroyed by a Russian rocket strike on the city of Zaporizhzhia overnight, with more explosions heard there this morning 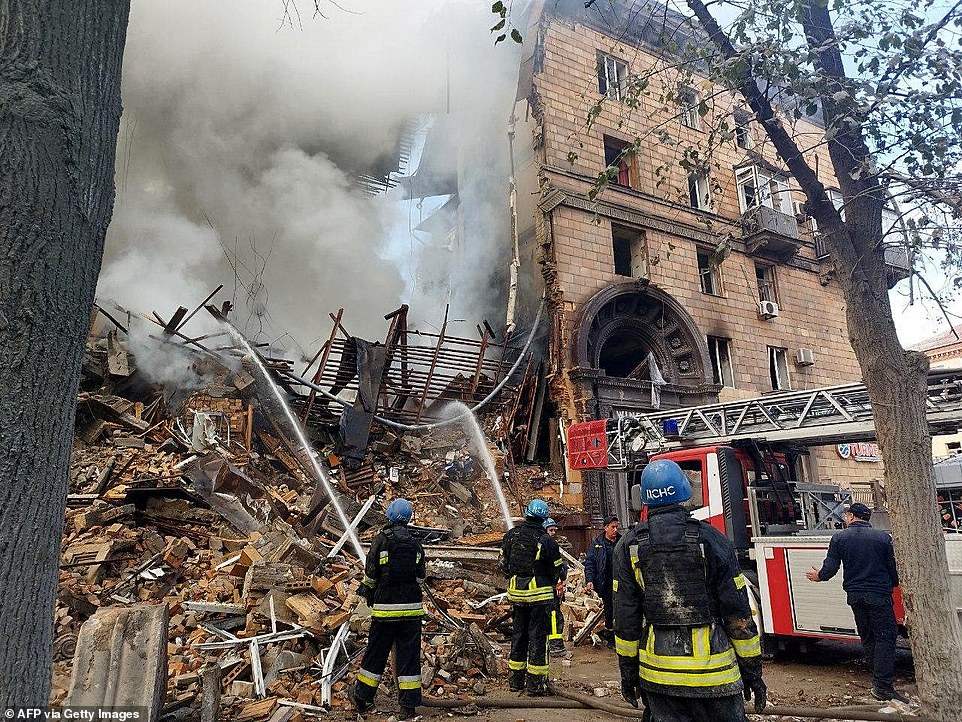 Ukraine accuses Russia of targeting civilians to sow terror and exact revenge as its war on Ukraine fails, while Moscow has denied deliberately killing innocents 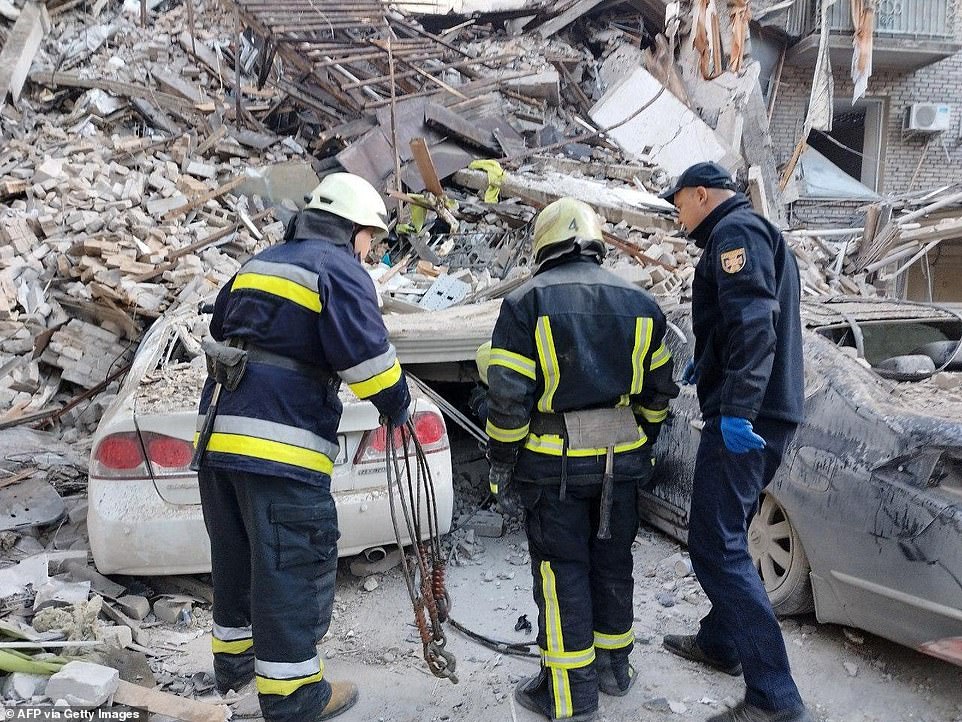 Ukrainian firefighters prepare to search the rubble of a destroyed building in Zaporizhzhia, in central Ukraine, after it was hit by a Russian rocket strike overnight

Vladimir Rogov, chairman of the ‘We Are Together with Russia’ group that seeks to justify Putin’s war, told the agency that: ‘Ukraine’s special forces.. have been regularly trained for combat coordination with the goal of crossing the Dnieper [River] and landing on its bank to take a stronghold.

‘No doubt, they are aiming at the Zaporizhzhia nuclear power plant.’

The plant is the largest in Europe and, though it shares a name with the city of Zaporizhzhia which is under Ukrainian control, it actually sits around 30 miles to the south in an area that Russia occupies.

Kyiv says Russia has stationed military units in and around the power plant including placing ammunition close to the reactors in what it has described as ‘nuclear blackmail’.

Seizing back the power plant is almost certainly a key objective for Ukraine’s generals in the south, who face the delicate task of doing so without triggering a meltdown that would blanket the nearby countryside in fallout.

Rogov added ‘They have been making concerted efforts [at planning for an attack], the results of which, I am afraid, we may see soon.’

Zaporizhzhia is one of four regions that Russian President Vladimir Putin annexed in violation of international laws on Wednesday, and is home to a nuclear plant that is under Russian occupation. The city of the same name remains under Ukrainian control.

The head of the UN’s nuclear watchdog is expected to visit Kyiv this week to discuss the situation at the Zaporizhzhia facility after Mr Putin signed a decree on Wednesday declaring that Russia was taking over the six-reactor plant.

Ukraine’s Foreign Ministry called it a criminal act and said it considered the Russian leader’s decree ‘null and void’, State nuclear operator Energoatom said it will continue to operate the plant.

Rafael Grossi, director-general of the International Atomic Energy Agency, plans to talk with Ukrainian officials about the Russian move. He will also discuss efforts to set up a secure protection zone around the facility, which has been damaged in the fighting and seen staff including its director abducted by Russian troops.

Mr Grossi will travel to Moscow for talks with Russian officials after a stop in Kyiv.

Meanwhile, leaders from more than 40 countries are meeting in Prague on Thursday to launch a ‘European Political Community’ aimed at boosting security and prosperity across the continent, a day after the Kremlin held the door open for further land grabs in Ukraine.

Speaking in a conference call with reporters, Kremlin spokesman Dmitry Peskov said that ‘certain territories will be reclaimed, and we will keep consulting residents who would be eager to embrace Russia’.

He did not specify which additional Ukrainian territories Moscow is eyeing, and would not say if the Kremlin plans to organise more of the ‘referendums’ in Ukraine that the Ukrainian government and the West have dismissed as illegitimate.

The precise borders of the areas Moscow is claiming remain unclear, but Mr Putin has vowed to defend Russia’s territory – including the annexed regions – with any means at his military’s disposal, including nuclear weapons. 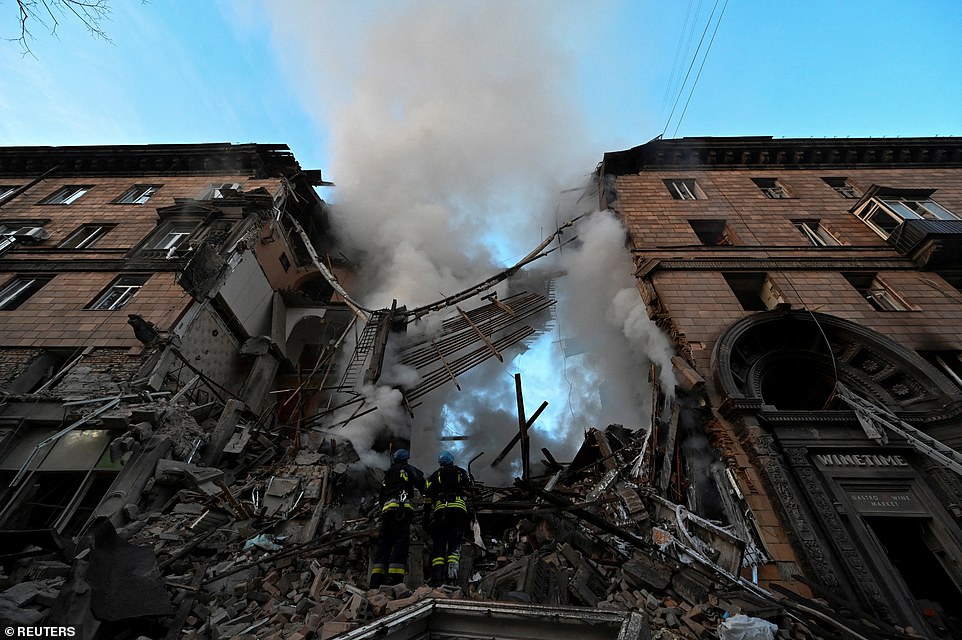 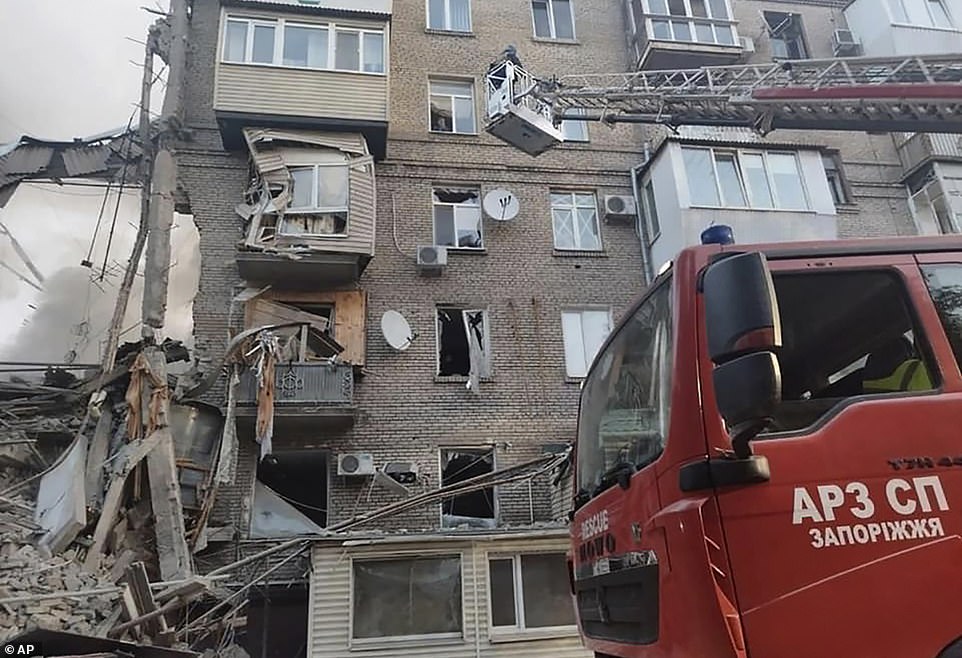 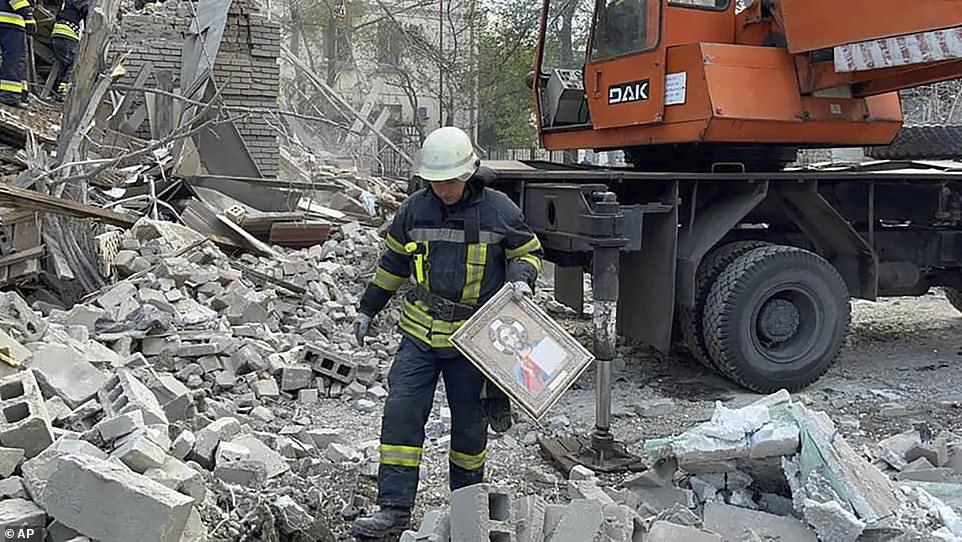 A painting of Christ is carried out of the ruins of a destroyed apartment block after Russian rockets struck the Ukrainian city of Zaporizhzhia overnight, killing at least two 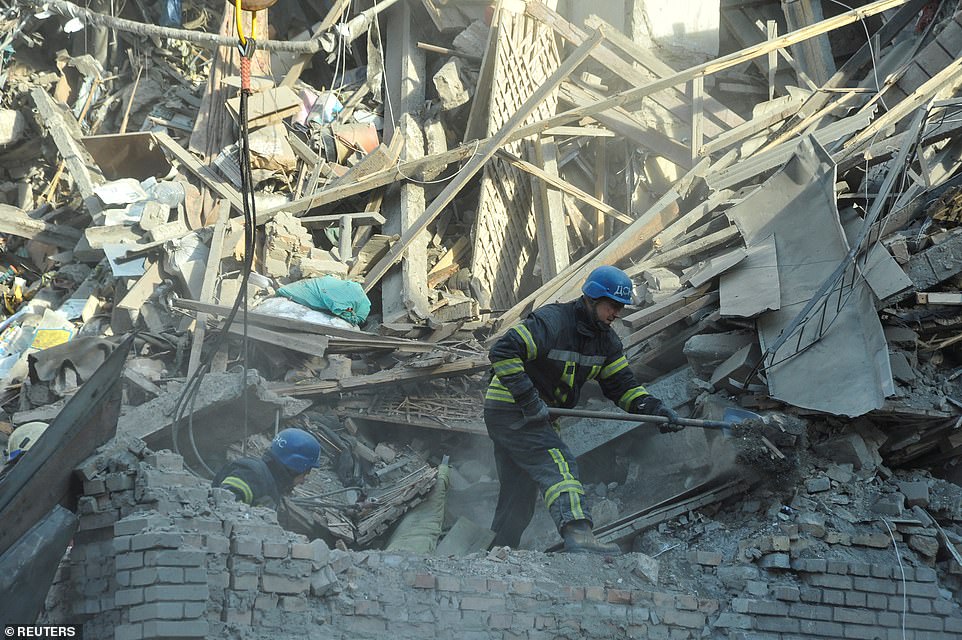 Rescuers work at the site of a residential building heavily damaged by a Russian missile strike, amid their war in Ukraine 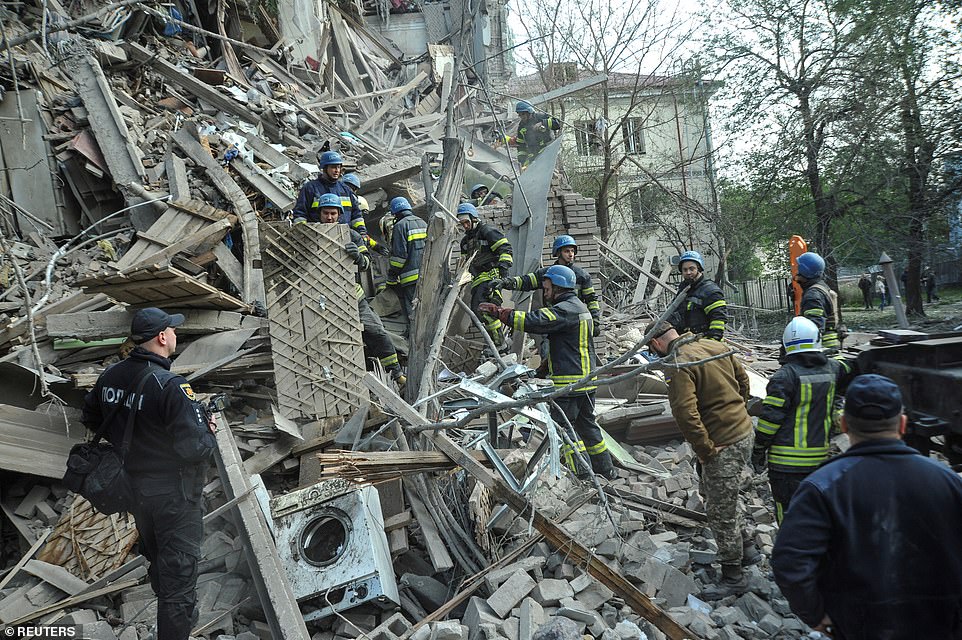 Firefighters, police and territorial defence soldiers help to sift through the ruins of an apartment building in the city of Zaporizhzhia, in central Ukraine, after it was struck by Russian rockets 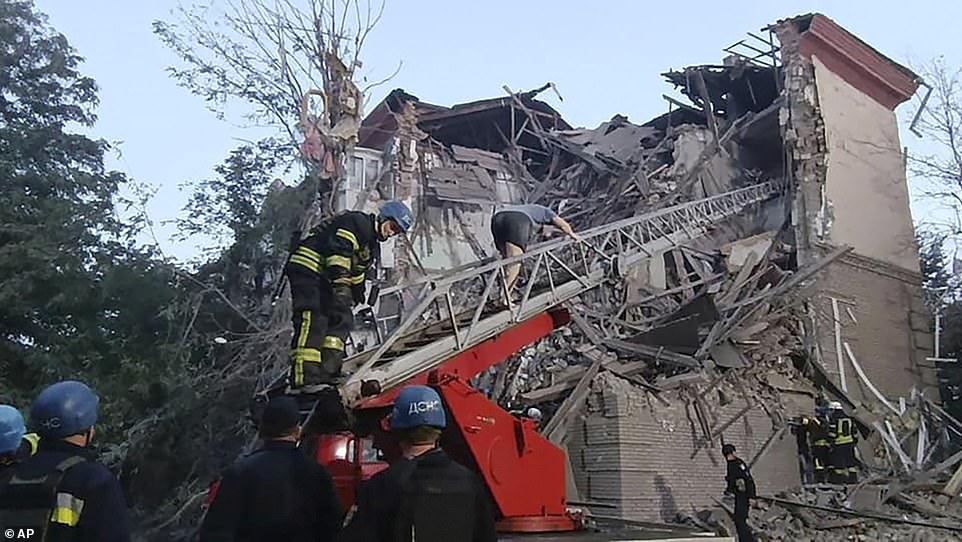 A Ukrainian civilian is helped out of the ruins of a destroyed house in the city of Zaporizhzhia, in central Ukraine, after it was bombarded by Russian rockets overnight 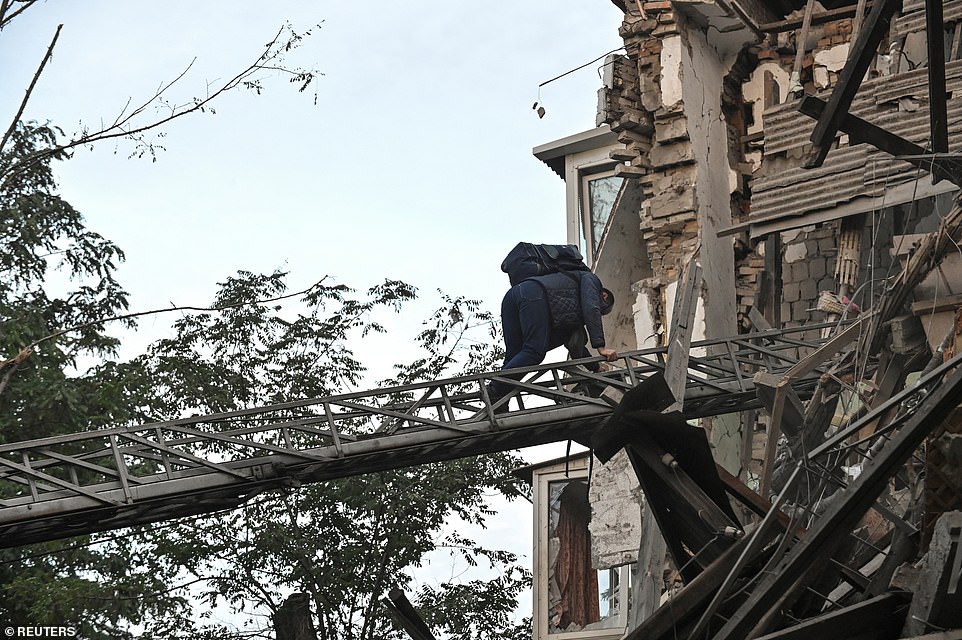 In his nightly video address, President Zelensky said the Ukrainian army recaptured three more villages in the Kherson region. Novovoskrysenske, Novohryhorivka, and Petropavlivka are all situated north-east of Kherson.

Ukrainian forces are seizing back villages in Kherson in humiliating battlefield defeats for Russian forces that have badly dented the image of a powerful Russian military and added to the tensions surrounding an ill-planned mobilisation. They have also fuelled fighting among Kremlin insiders and left Mr Putin increasingly cornered.

On Wednesday, the Ukrainian military said the Ukrainian flag had been raised above seven Kherson region villages previously occupied by the Russians. The closest of the liberated villages to the city of Kherson is Davydiv Brid, some 60 miles (100km) away.

The deputy head of the Ukrainian regional government, Yurii Sobolevskyi, said military hospitals are full of wounded Russian soldiers and that Russian military medics lack supplies. Once they are stabilised, Russian soldiers are being sent to Crimea, which Russia annexed from Ukraine in 2014.

When Russian troops pulled back from the Donetsk city of Lyman over the weekend, they retreated so rapidly that they left behind the bodies of their comrades. Some were still lying by the side of the road leading into the city on Wednesday.

Lyman suffered heavy damage both during the occupation and as Ukrainian soldiers fought to retake it. Mykola, a 71-year-old man who gave only his first name, was among about 100 residents who lined up for aid on Wednesday.

‘We want the war to come to an end, the pharmacy and shops and hospitals to start working as they used to,’ he said. ‘Now we don’t have anything yet. Everything is destroyed and pillaged, a complete disaster.’

In his nightly address, a defiant Mr Zelensky switched to speaking Russian to tell the Moscow leadership that it has already lost the war that it launched on February 24.

‘You have lost because even now, on the 224th day of full-scale war, you have to explain to your society why this is all necessary,’ he said.

He said Ukrainians know what they are fighting for.

‘And more and more citizens of Russia are realising that they must die simply because one person does not want to end the war.’

Football legend Pele watches Brazil vs South Korea from the…