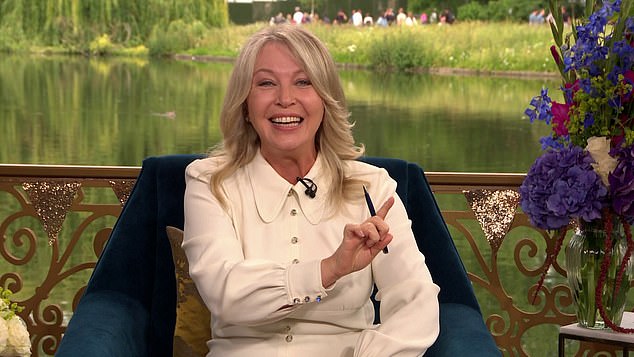 As the great and the good poured into St Paul’s Cathedral in the busload – literally in the case of underage royals – the Queen sat watching her shift unfold from home in Windsor, hoping with a small glass of congratulation to her elbow.

In that regard, she was, as always, in sync with her people, most of whom – myself included – experienced it that way.

It is at times like these that the BBC, for all its flaws, comes into its own as the record-breaking broadcaster.

Other channels are available, of course, but why bother when Auntie has it all: David Dimbleby’s paternal tones, the best vantage points, years and years of experience – and on this occasion Kirsty Young.

There is a certain gravitas that only comes with wisdom and experience, and Kirsty Young has both, having suffered badly in recent years with the debilitating condition fibromyalgia

Ah, Kirsty Young. All eyes were on the arrival of the Duke and Duchess of Sussex at St Paul’s, but for me it was Young who really stole the show, surrounded by flowers and wild birds, seemingly adrift on an anniversary themed pergola in the middle of St James’s Park.

I had completely forgotten how good she is, how she brings a sense of quiet intimacy in the most public moments. There aren’t many female broadcasters of her caliber, not least because the BBC has had a tendency to retire them much earlier than their male counterparts, who, like Dimbleby, seem to go on forever.

But there’s a certain gravitas that only comes with wisdom and experience, and Young has both, having suffered badly in recent years with the debilitating condition fibromyalgia.

There is warmth and sincerity in her presentation, but she is also sharp as nails. Her guests, former Archbishop of York John Sentamu and historian Robert Lacey, contributed to that class act and provided truly erudite commentary. At the cathedral, things weren’t so stilted: In a hush, Dimbleby decided to fill airtime by commenting on a pigeon’s progress up the stairs. 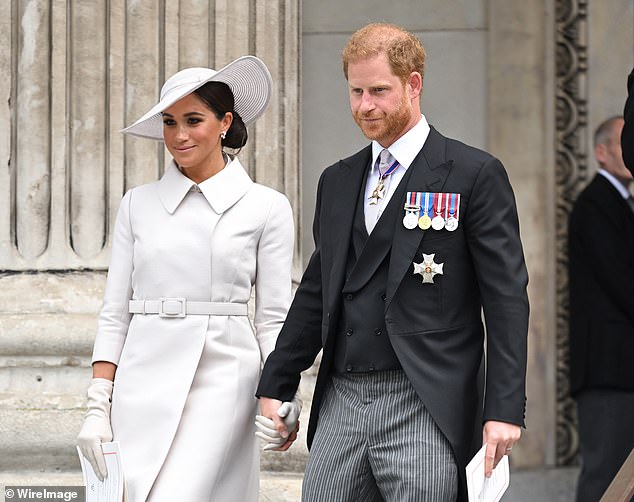 Inevitably, however, all eyes were on the Duke and Duchess of Sussex as they made their long-awaited entrance. The Duchess of Sussex’s Dior dress was, I’m told, lilac, but on screen it looked pristine white

There were some pretty excruciating pre-recorded messages from various random people, including Canadian Prime Minister Justin Trudeau, strict judge Craig Revel Horwood (is the Queen a strict fan?) and that horrible woman who runs New Zealand.

But the headliner was the royals. First of all, the underage members of the Firm in all their finery. Eugenie as a juicy tangerine, Zara Phillips posing as a Post-it note. The Wessexes immaculate in matching cream tones. The Princess Royal was, as always, effortlessly chic; the Duchess of Cornwall impeccably dressed in one of her signature coat and dress combinations, so flattering yet always elegant.

Inevitably, however, all eyes were on the Duke and Duchess of Sussex as they made their long-awaited entrance. The Duchess of Sussex’s Dior dress was, I’m told, lilac, but on screen it looked pristine white. There were reports of cheers when the couple arrived, but all I could hear was cheers as they climbed the stairs.

It must have been hard for Meghan to resist the urge to turn and wave at benefactors, as the Duchess of Cambridge did moments later, but – to her credit – she stuck to the script. Harry allowed himself a wave, but looked dead serious, his wife beside him as he worked his way up the reception line. When they sat down a few rows from the front, they must have felt every eyeball in their backs.

If it bothered them, you couldn’t see it. They seemed to be enjoying themselves most of all, or at least Harry did, laughing and joking in the naughty corner with his cousins. The Duke and Duchess of Cambridge, on the other hand, sat stiffly in the front and looked a little anxious. But then, of course, they bear the weight of the responsibility on their shoulders, which have grown all the more heavy since Harry decided to unload his share and opt for a celebrity-style life in America.

A fact perhaps worth remembering as we honor a woman whose entire life has been spent serving her country.

Cody Simpson a sponsorship dream that could change swimming forever