SARAH VINE: You get the impression that William and Kate would rather avoid Harry and Meghan 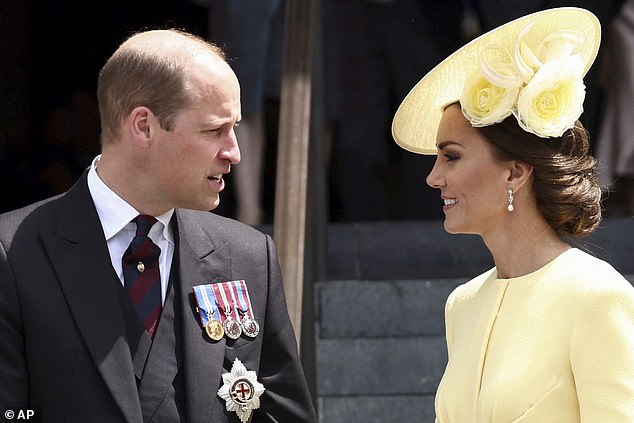 Perhaps they went to the castle to visit the queen? You can imagine Her Majesty – who had never met her great-granddaughter until last week – would have been delighted.

Under normal circumstances, it might even have become a greater opportunity, a chance for several generations of the family to come together and create memories, as she herself recently put it.

After all, the Queen is not the only family member that Lilibet – or for that matter her older brother Archie – has not gotten to know much.

Uncles, aunts, cousins, their grandfather Prince Charles – they all remain virtually strangers to the Sussex children. That’s a shame, because as Prince Harry knows from his close friendship with his own cousins, Princesses Beatrice and Eugenie, family ties matter.

There is a shared experience that can be invaluable, especially when the going gets tough. It seems sad to deprive the little Sussexes of that.

But it wasn’t to be, at least not on this occasion. While we’re not sure, it seems unlikely that Princes George and Charlotte attended Lilibet’s birthday, as they were in Cardiff with their parents.

As for William and Kate themselves, you clearly get the impression that they would rather attend the opening of an envelope on Mars than face Harry and Meghan.

That was certainly the impression made on Friday in St Paul’s Cathedral, where not a single glance came between the two couples.

Fair enough they were on opposite sides of the cathedral and arrived separately. But you would never have known the brothers were even related, let alone ever so close that they finished each other’s sentences. 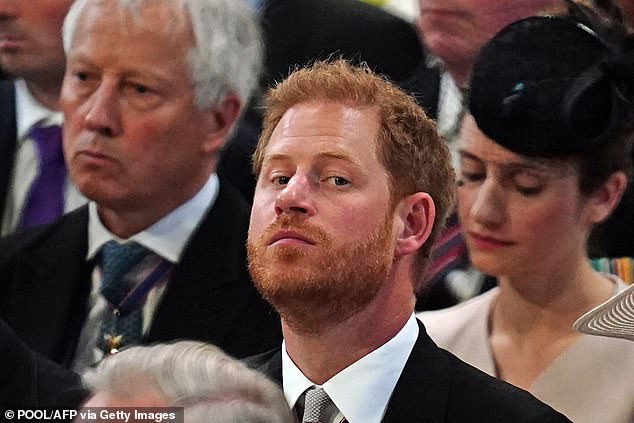 Prince Harry, pictured, had a stony face during Thanksgiving service at St Paul’s Cathedral on Friday

The only thing they seemed to have in common was their gritty expressions.

If ever there was a time to bury the hatchet, it was this celebration of the Queen’s very special Jubilee. After all, no one understands better than Her Majesty the need to sometimes put your own emotions aside for the greater good.

It would have been a mature and meaningful gesture, a genuine tribute to her sacrifice. And yet they couldn’t even handle it for her. Honestly, I felt like smashing both of their thick skulls together.

That said, I still had a faint hope that it was protocol, not pride, to tell them apart at St Paul’s. After all, it was a very formal setting and some things are done much more easily in a more relaxed environment.

Last night’s Buckingham Palace concert, in the presence of rock royalty, may have been the perfect chance to lighten the air. A hug, a shared text, a bit of a joke – everything seems less serious when you’re having fun. But no. Not even that. Harry and Meghan were reportedly trapped in Frogmore Cottage (current cost per stay somewhere north of a week at The Ritz).

A cynic might argue that the only reason the Sussexes showed up was to get that all-important photo of Lilibet with Lilibet and to charge their royal status for Netflix.

Likewise, it is clear that Prince William is not in the mood for compromise. Maybe he knows something we don’t. After all, Harry’s much-discussed tell-all memoir was scheduled for release this fall. It’s hard to imagine any revelations more damning than those in the Oprah interview, but you never know.

And why should the Cambridges always be the ones to offer the olive branch, especially if they end up just poked in the eye with it?

At least one thing is clear. Even the Queen herself, with her remarkable ability to bring people of all different backgrounds together, cannot bridge the current gulf between these two brothers. A sad footnote to an otherwise joyous weekend.

Old-age care guide that NO family can afford to ignore