Scott Morrison could be risking a back injury by awkwardly lugging a filing cabinet inside his suburban home as he finally begins moving out of Kirribilli House.

The ousted PM and his wife Jenny began moving some of their possessions into the family home in Port Hacking, in Sydney’s south, on Thursday as the Australian public grew impatient.

Mr Morrison has spent almost 13 days living in the heritage-listed mansion in the shadow of the Sydney Harbour Bridge since losing to Anthony Albanese in May 21 – earning him the nickname ‘Squat Morrison’.

The couple said goodbye to a painter and began renovations of the three-bedroom house on Wednesday, hauling boxes of belongings inside and stacking more in their garage.

No longer being able to call on an army of helpers, Mr Morrison awkwardly carried a filing cabinet across the front of his home while Jenny handled shopping bags full of various things.

No longer being able to call on an army of helpers, Mr Morrison awkwardly carried a filing cabinet across the front of his home 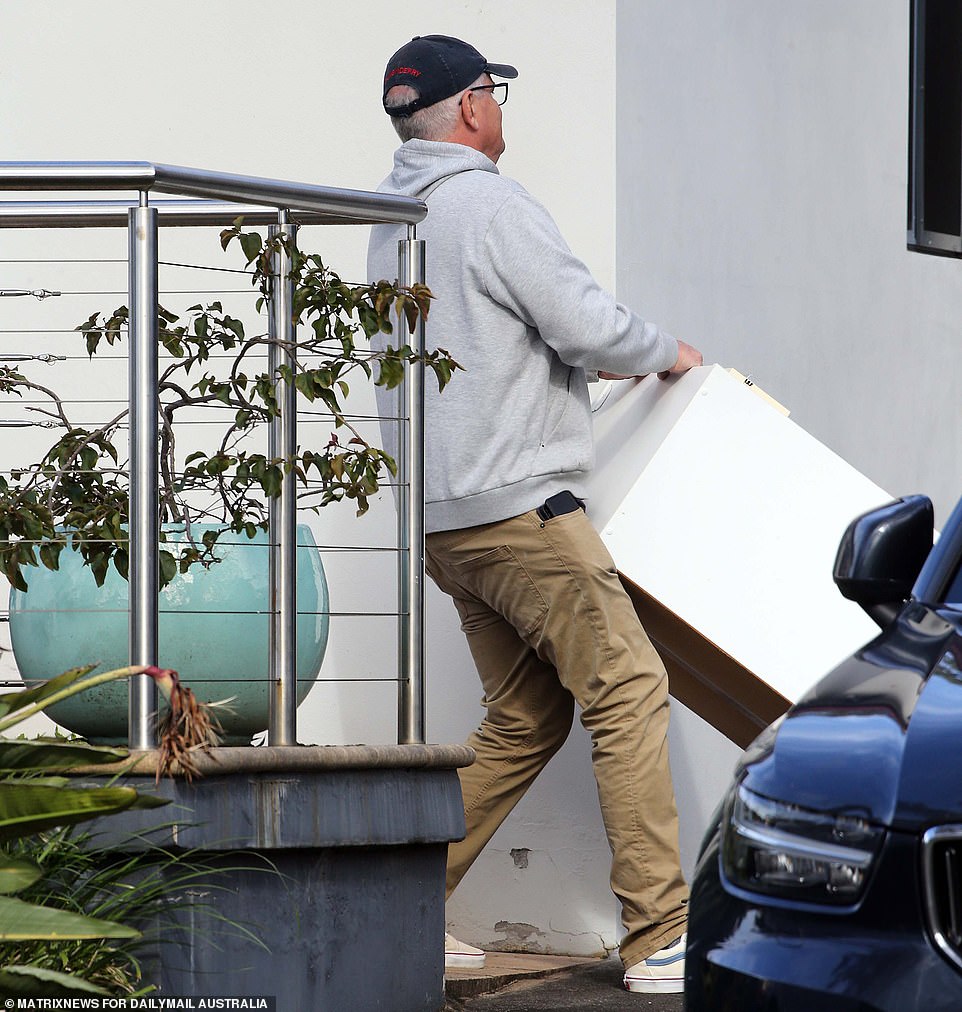 The former PM donned a relaxed hoodie, cargo pants and vans for the move 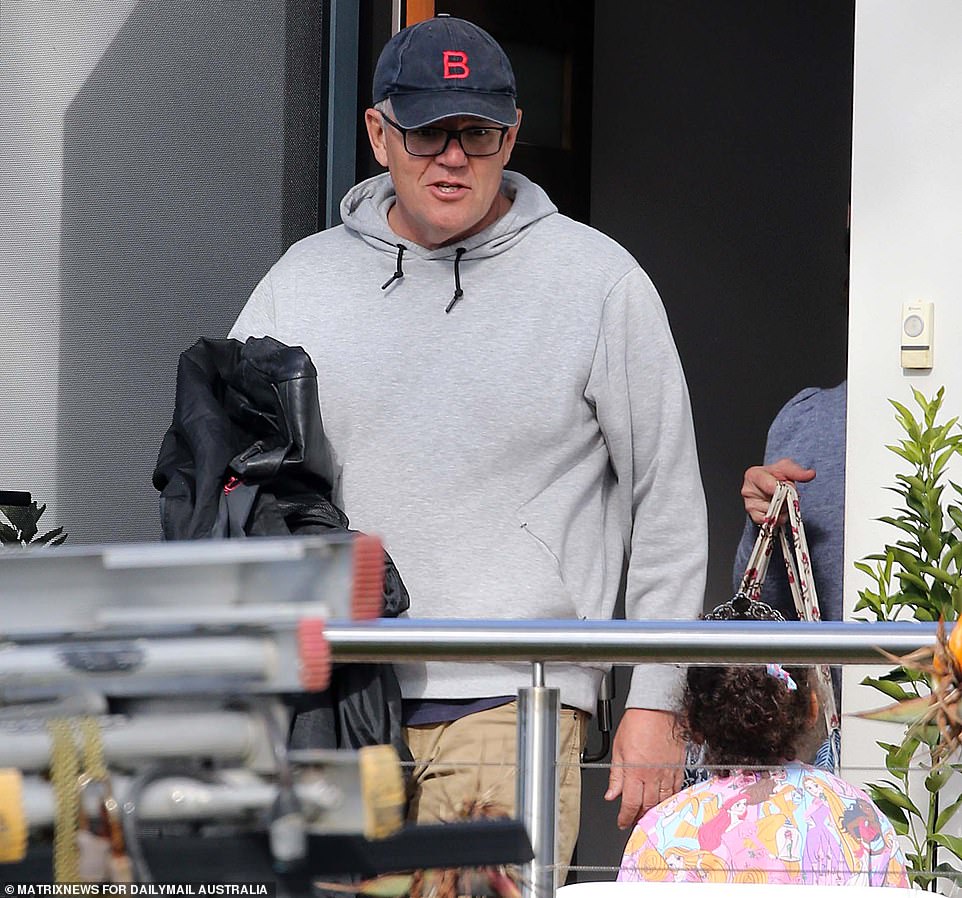 Chiropractor Alex Hopwood of StretchStudio said Mr Morrison’s technique in carrying the filing cabinet put him at risk of injury.

‘The worst case scenario is lumbar disc injury, the factors that can contribute to this is his age, and the size and weight of the object he is carrying,’ he said.

‘From the picture, it is evident he is straining his back trying to use his body weight to lean back to offset the weight of the drawers. This could lead to lower back strain in the erector muscles.

‘Ideally the cabinet would be moved by two people. This would be a safer method and decrease the risk of any back injury. 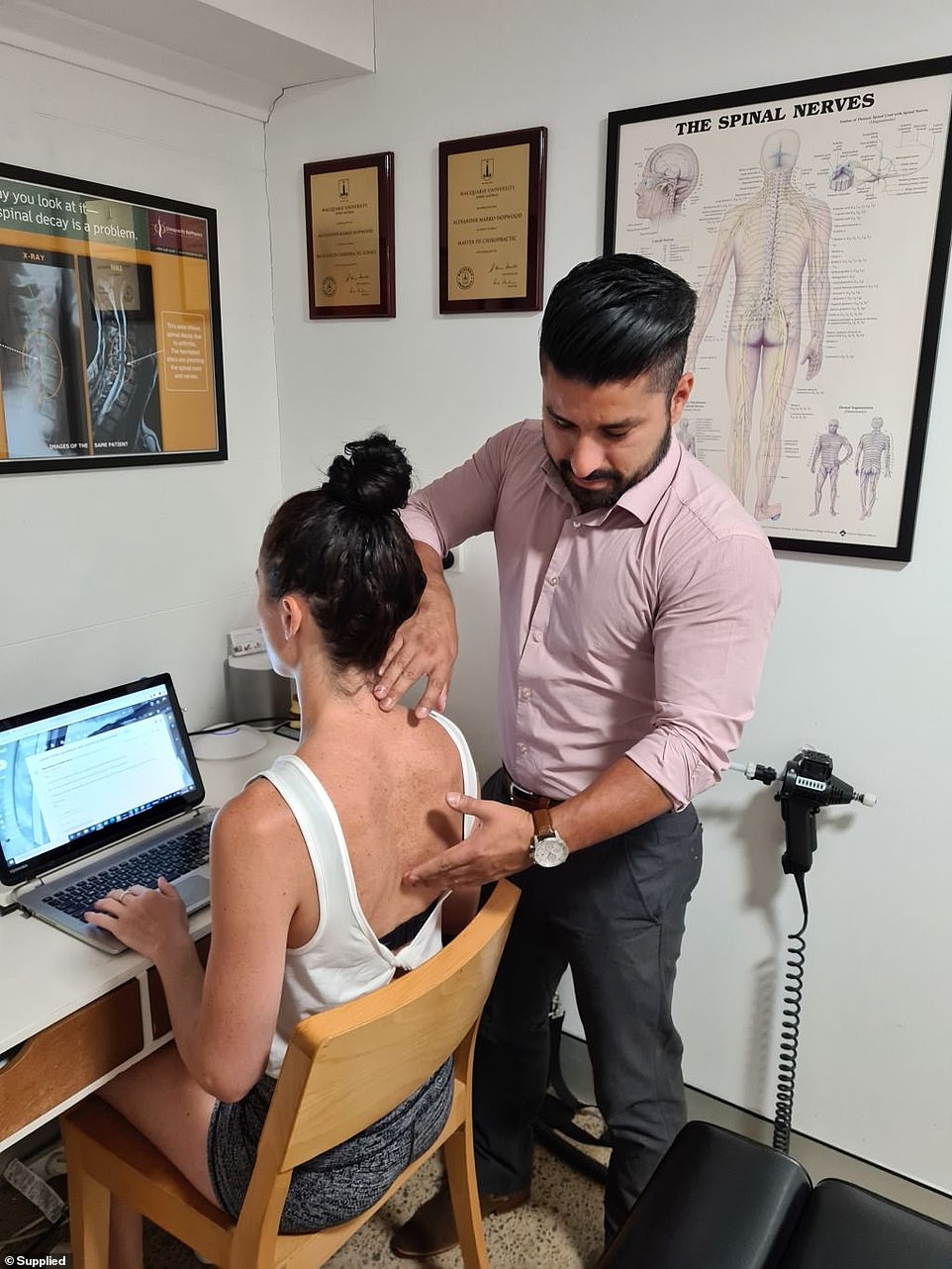 ‘The biggest risk he faces is a fall or trip. This is because of the way he is obstructing his legs. This impedes his ability to walk safely and could result in a fall which is the biggest risk of injury in the elderly.’

However, a prominent physiotherapist, whose position prevents him from speaking on the record, disagreed that a back injury was at risk, but agreed he could trip over.

‘This is actually impressive technique – straight back, upright. He’s more likely to fall down the stairs,’ he said. 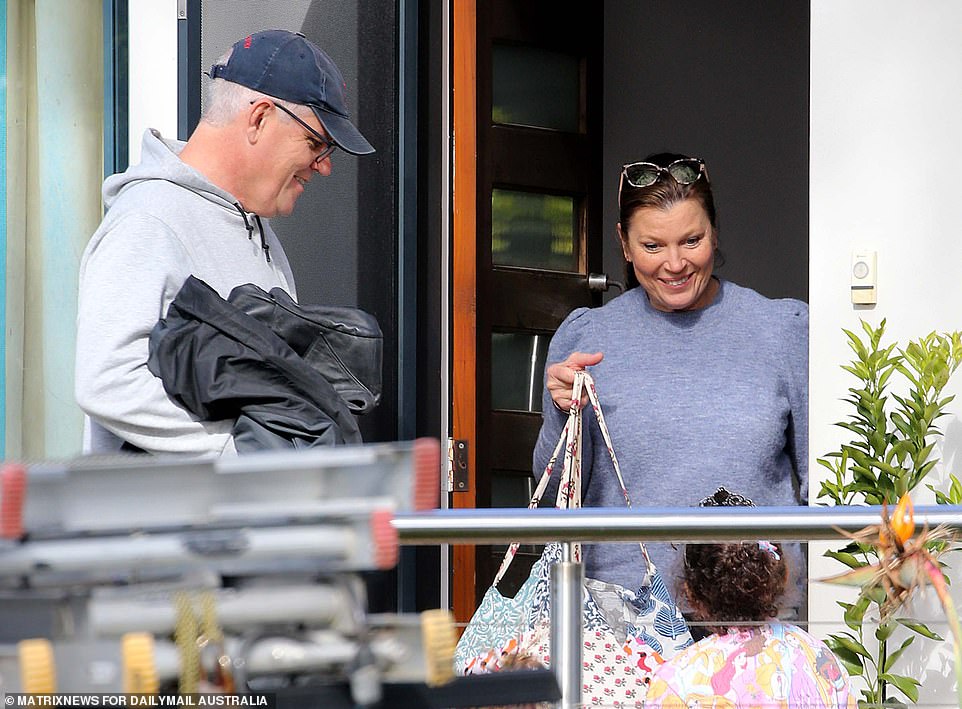 The dumped PM and his wife Jenny began moving some of their possessions into the family home in Port Hacking, in Sydney’s south, on Thursday 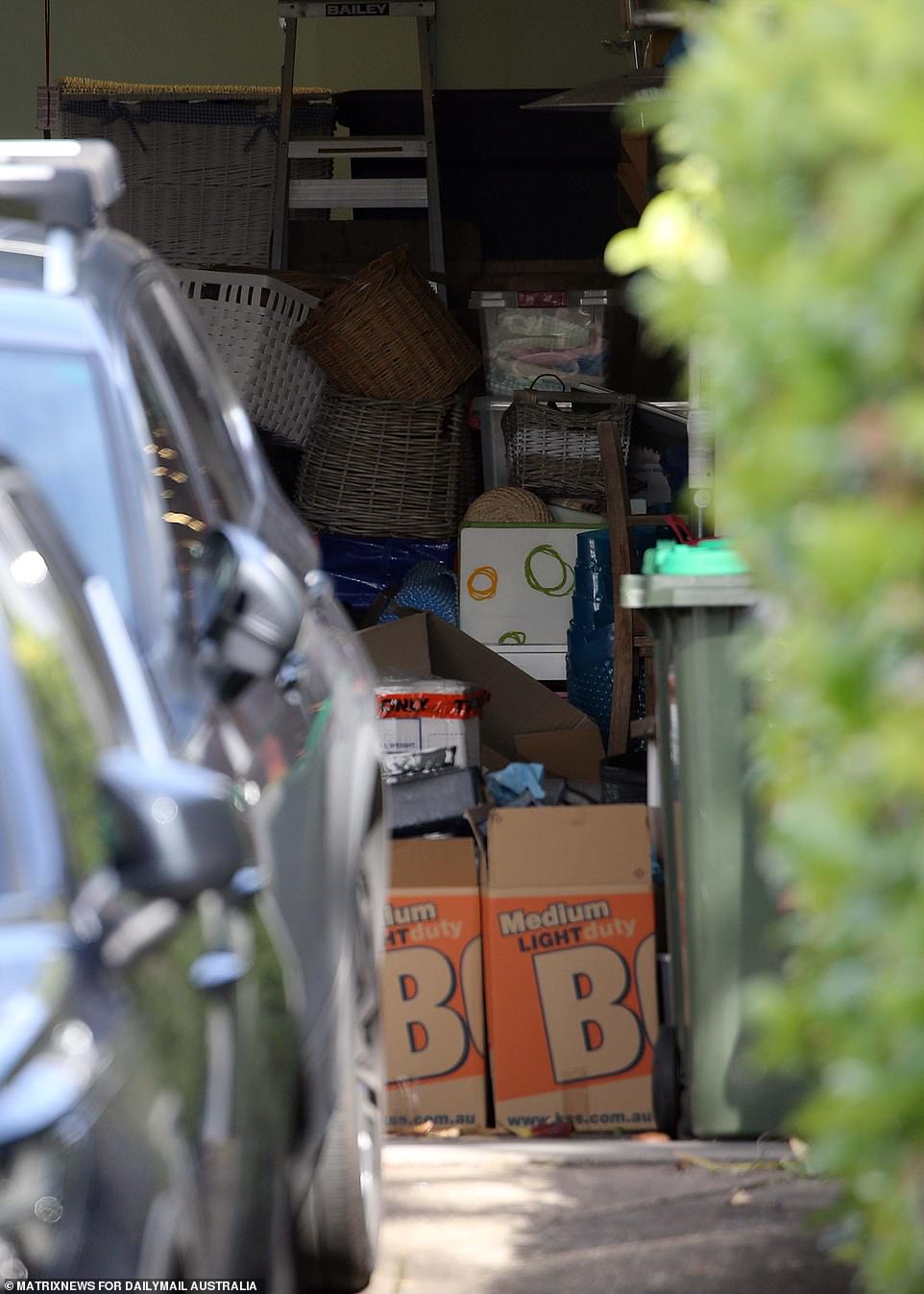 Mr Morrison’s outfits have become increasingly casual this week since he was freed from the fashion fixation of high office, trending into ‘daggy dad’ gear and even cool threads with his favourite Sharks baseball cap.

On Thursday he rugged up in an oversized grey hoodie teamed with tan chinos, and white Vans sneakers.

Mr Morrison is said to have a deadline of two weeks since the election to clear out of Kirribilli House after securing an extension to his stay.

His delay, twice as long as all but one other former PM, is blamed on renovations at his family home, which was being repainted on Wednesday and Thursday.

A painter’s white Toyota Hilux with ladders on top and a covered tray laden with gear and a six-pack of beer was parked outside on Thursday afternoon before the worker came out in paint-splattered clothes. 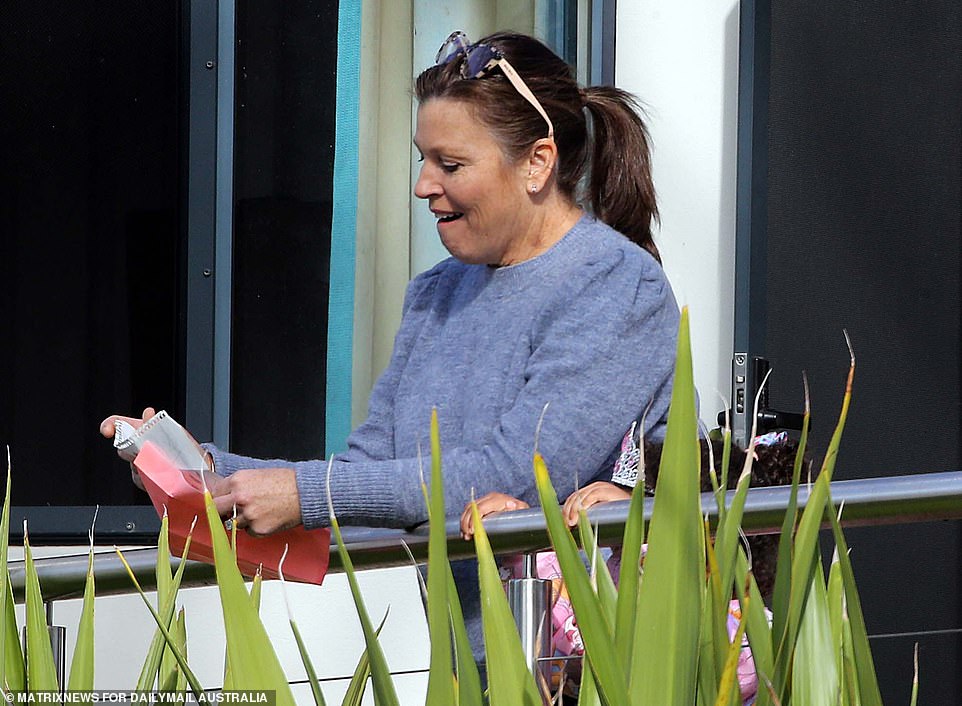 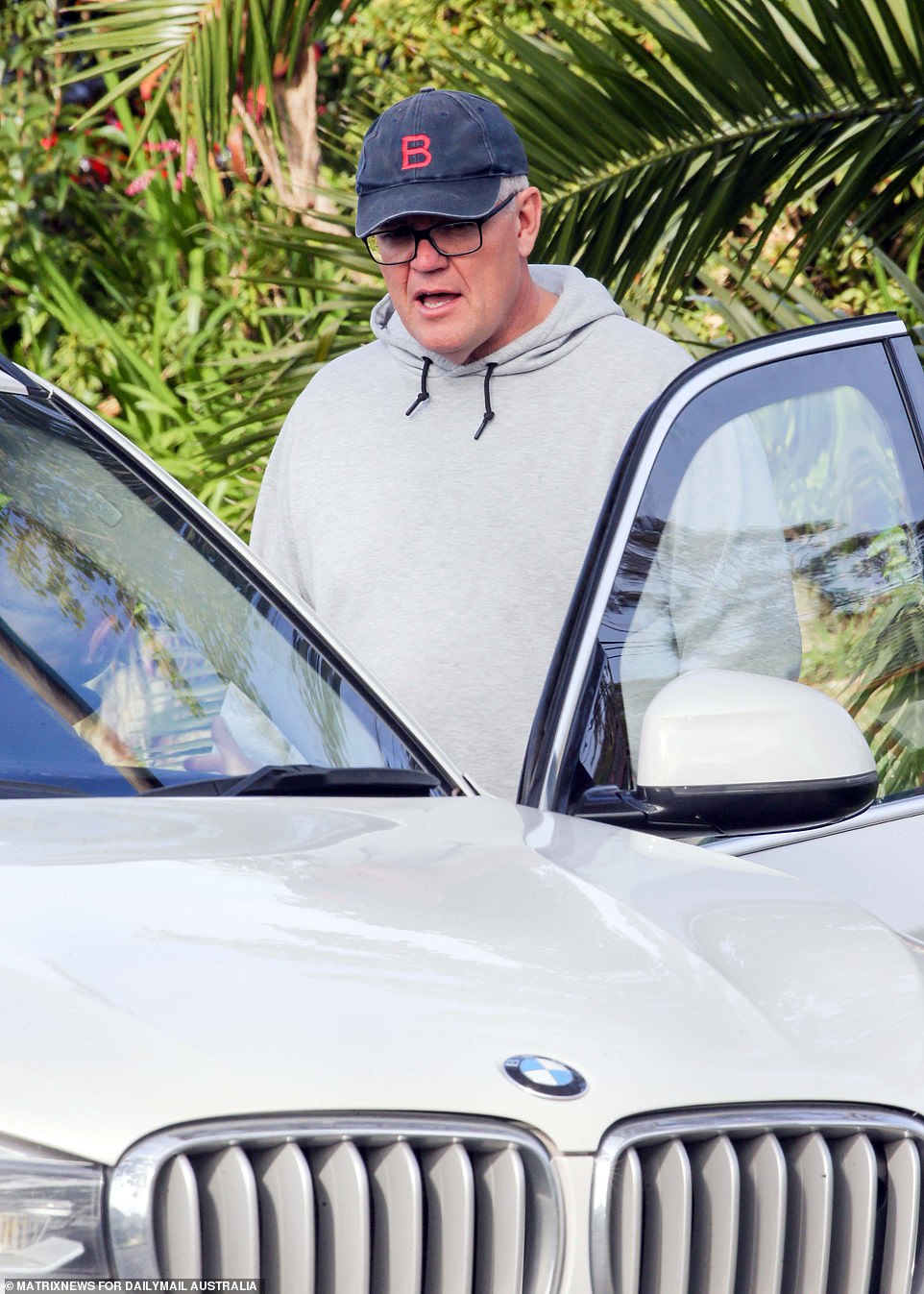 Mr Morrison’s outfits have got increasingly casual this week since he was freed from the fashion fixation of high office, trending into ‘daggy dad’ gear and a favourite baseball cap

While the Morrisons finally made some progress on leaving Kirribilli House, a comedian from satirical outfit The Chaser showed up at the plush mansion to stick the boot in.

The suited satire writer approached the iron gates brandishing a mock eviction notice and tried to hand it to a policeman standing guard – with his hand nervously resting on his holstered gun.

‘The owners of this property, the Australian people, hereby give former tenant ScoMo final notice to vacate this property. Failure to do so will result in further silly pranks,’ it read.

When the policeman refused to accept it, the notice was attached to the gate and then the wall of Kirribilli House.

Moving vans finally made their way to Kirribilli House on Friday morning but the former PM still hasn’t broken John Howard’s record, who took 16 days to leave the Sydney mansion when he lost to Kevin Rudd in 2007.

Earlier, Mr Morrison’s press contact said the former PM was entitled to two weeks transition time to pack up and leave Kirribilli House, despite no one but Mr Howard ever taking half that long.

‘[Mr Morrison is] in the process of moving out. There’s two weeks you have to move out, that’s protocol. So there’s no delay,’ they said. 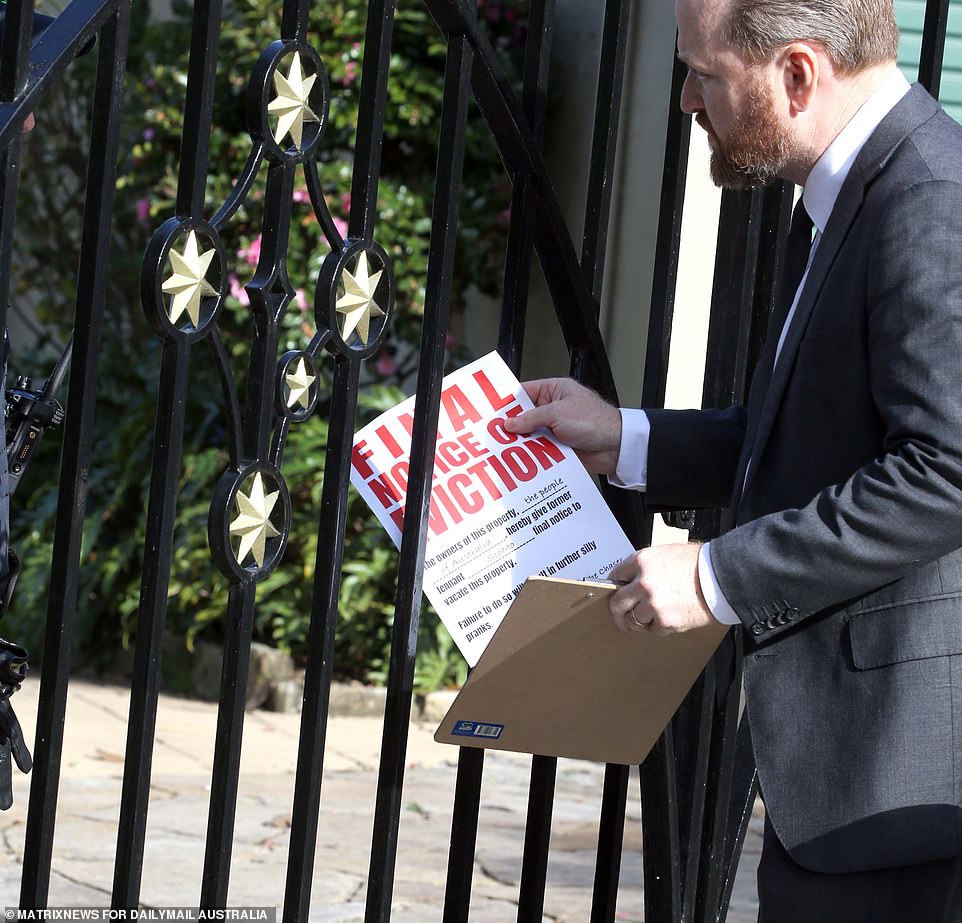 While the Morrisons finally made some progress on leaving Kirribilli House, a comedian from satirical outfit The Chaser showed up at the plush mansion to stick the boot in with a mock eviction notice 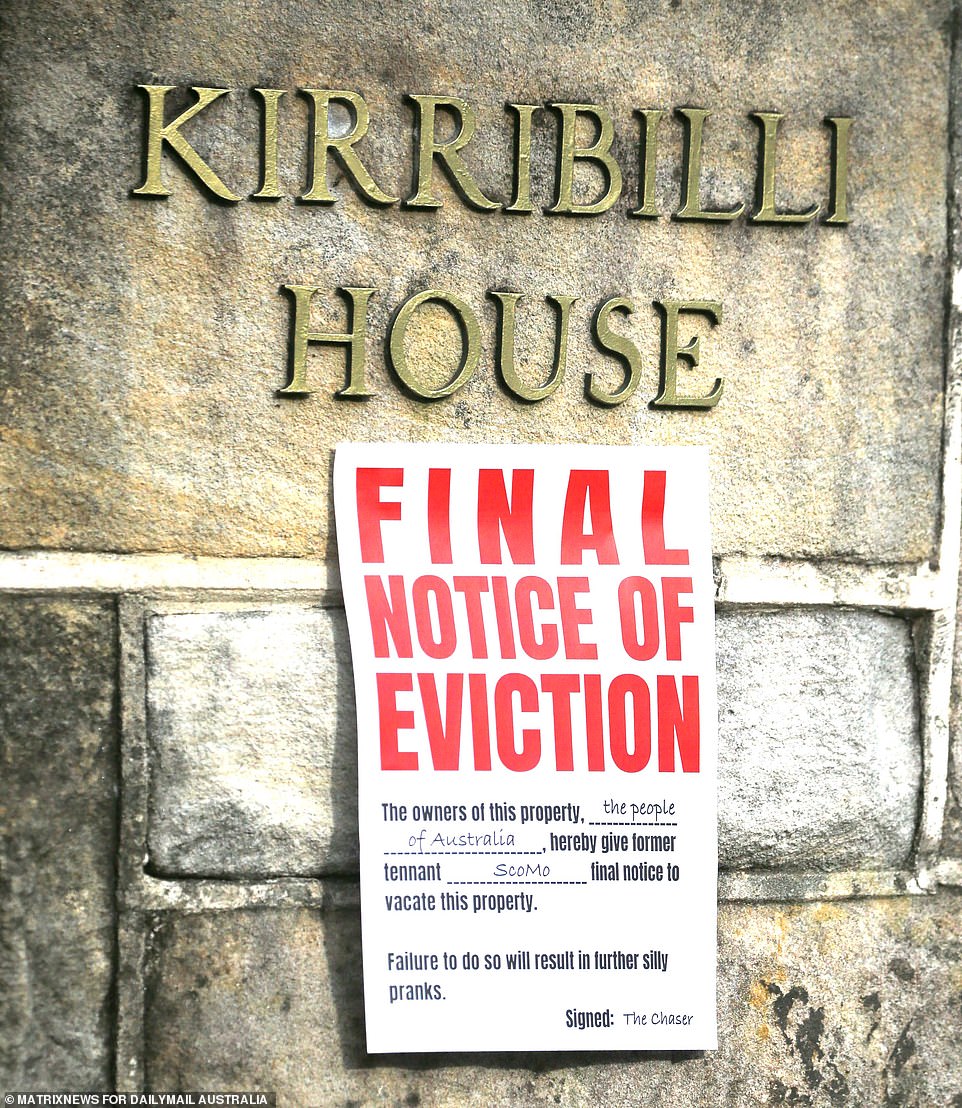 The document read FINAL NOTICE OF EVICTION in big red lettering, demanding Mr Morrison leave the building, and was stuck on the wall when police refused to take it 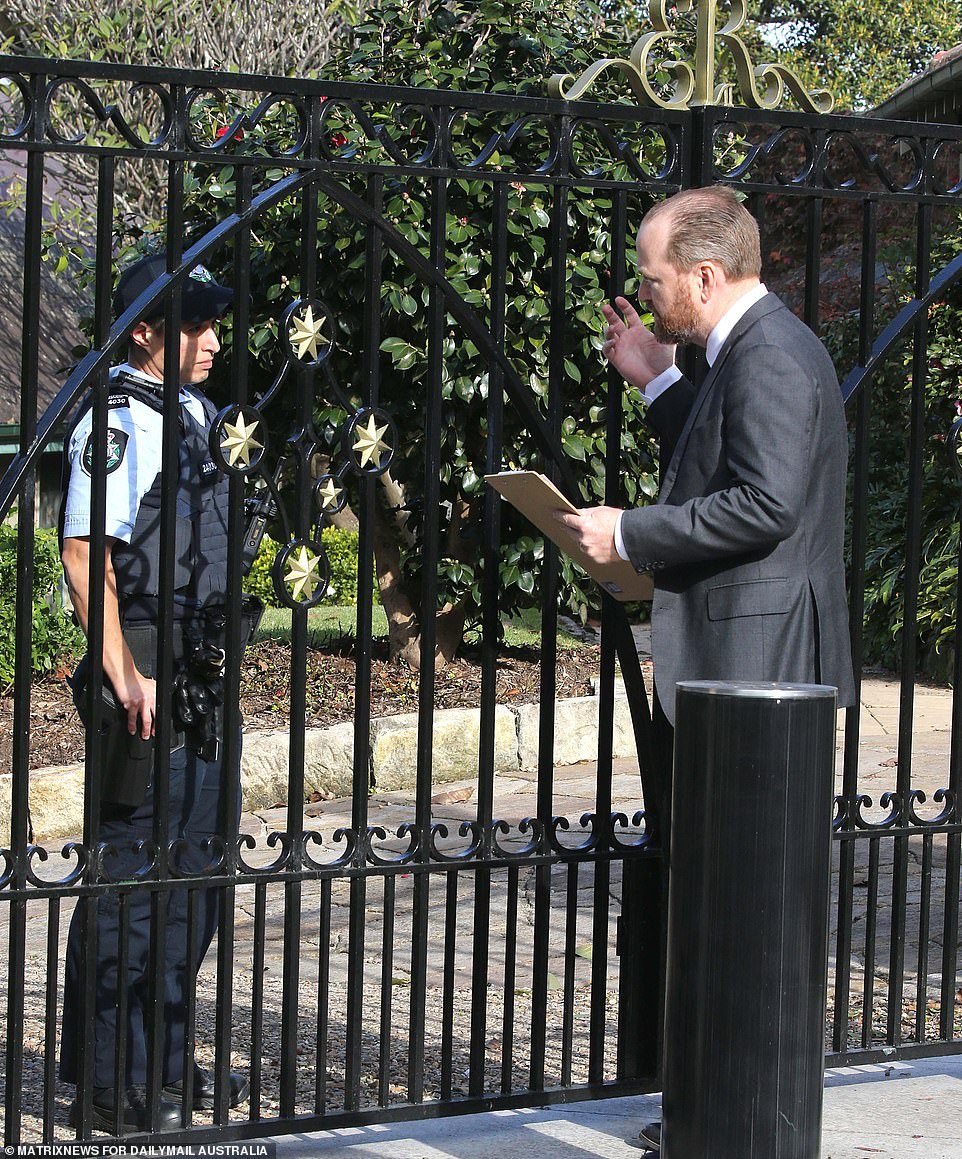 While public irritation with Mr Morrison’s tardiness is growing among voters who rejected him at the polls, his supporters leaped to his defence.

‘I think it’s gracious of the new PM to extend him the opportunity to stay there,’ Mr Morrison’s confidant David Gazard said on Sky News on Wednesday.

‘There’s no real secret to it, he’s just getting his house in the Shire repainted, the poor guy hasn’t really had a day off for the past three years so he’s doing some much-needed renovation on the interior of the house so he can move in.’

With his predecessor still occupying Kirribilli House, Mr Albanese has made do with receiving some official visitors at his $2.5 million three-bedroom bungalow in Marrickville, in Sydney’s inner-west.

He has been spotted picking up a newspaper in his pyjamas several times since being elected PM, and going for walks with his girlfriend Jodie Haydon and dog Toto around the neighbourhood.

Mr Morrison has at least moved out of The Lodge in Canberra, with a moving truck seen there last Thursday, but as a Sydney native Mr Albanese is expected to primarily live at Kirribilli. 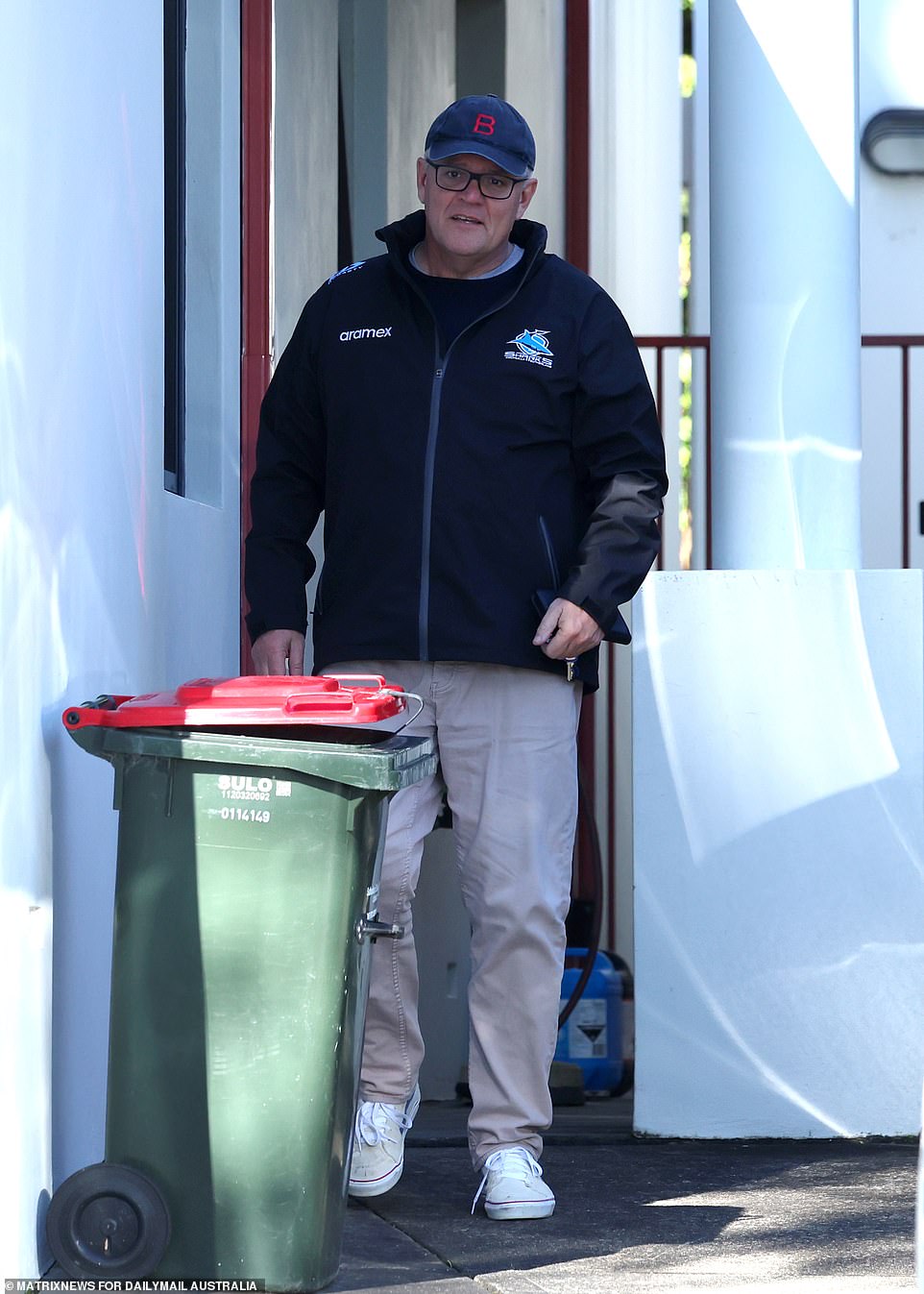 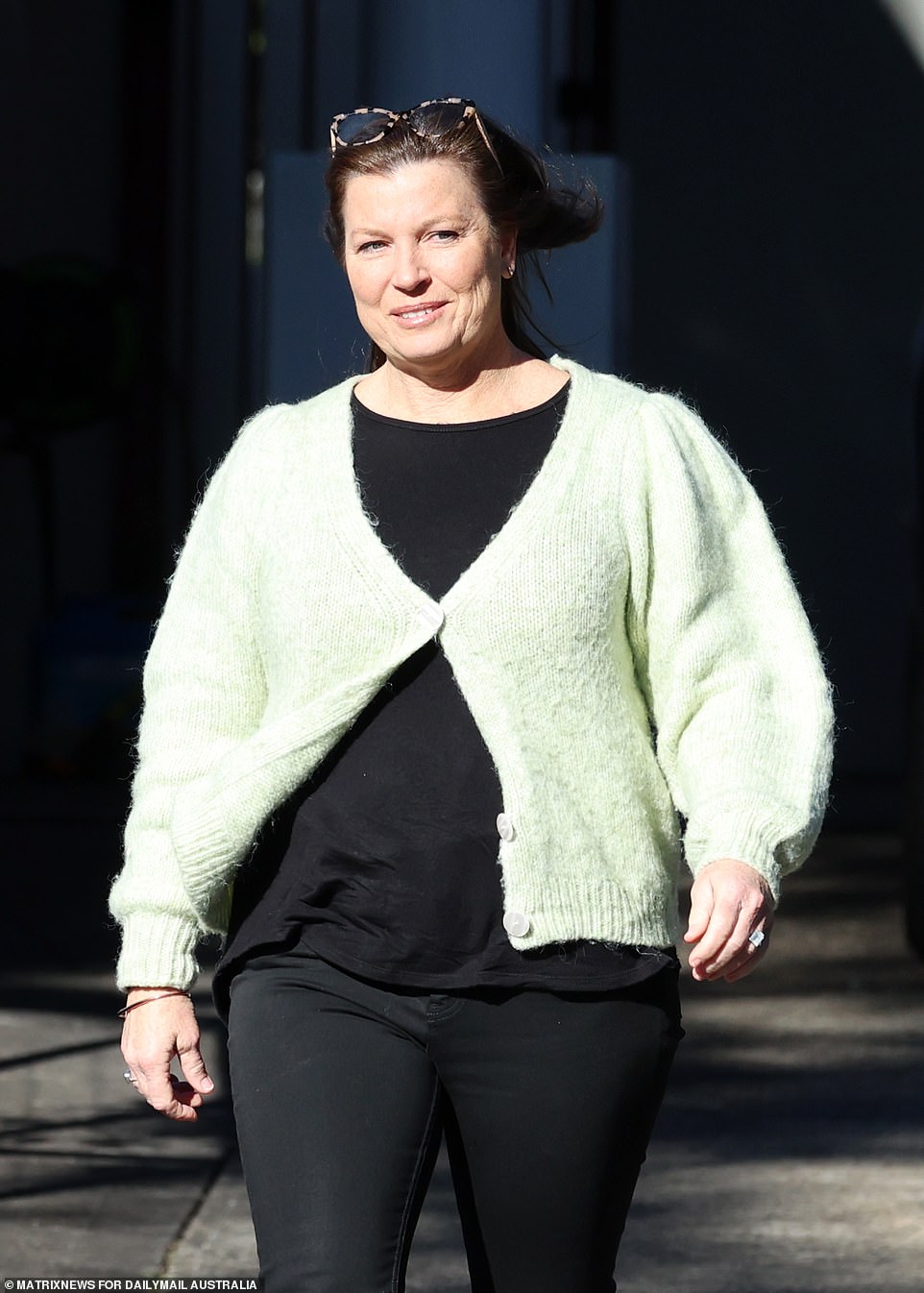 Mr Morrison’s wife Jenny arrived at their Port Hacking home about 9.55am on Wednesday to oversee renovations, with a painter already inside the house 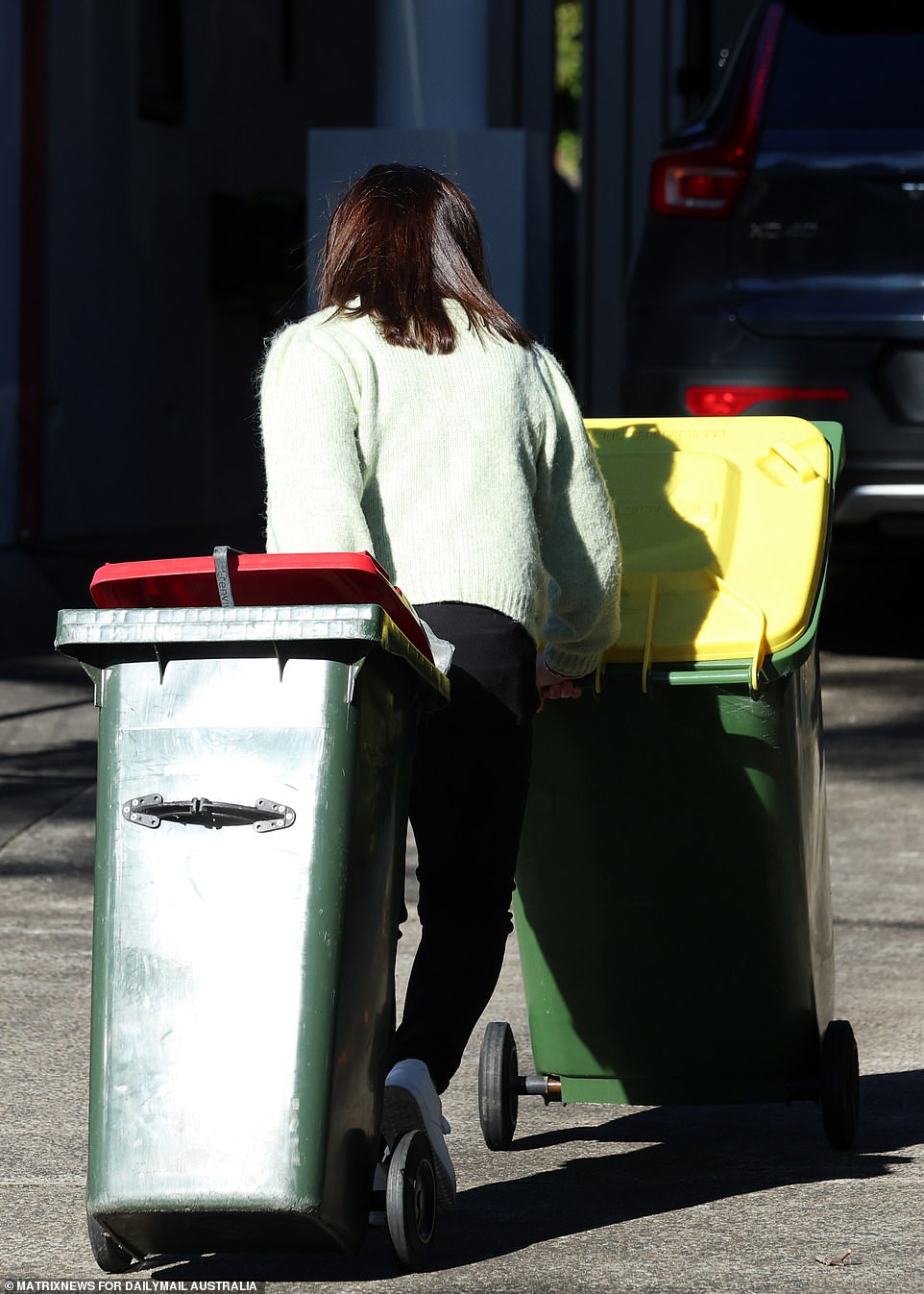 Mrs Morrison drags the bins up the driveway like any suburban mum, but there is no indication when she will live there again full time

Malcolm Turnbull: Stayed in his own mansion

‘There’s no one, in all of the extensive Hillsong Church family that could provide the Morrison family with a place to stay while their home in the Sutherland Shire is being renovated?!’ one wrote.

‘Every day Morrison overstays his welcome at Kirribilli House is a slap in the face to the Australian people. He is now bludging on the taxpayer big time enjoying the trappings of office,’ another added.

A third pointed out that leaving Kirribilli was just another thing Mr Morrison was late with during his time in office, including his response to the 2019-20 Black Summer bushfires, securing Covid vaccines, giving relief to flood victims, and preventing the Solomon Islands from signing a security deal with China.

‘This is not about what the Morrisons need or want, or what Albanese permits or agrees to. It’s about what the Australia people view as a public asset and it’s appropriate use,’ another wrote.

It’s symbolic. It’s like giving a perpendicular digit to the people re election result.’

‘Can you think of any other job that would allow you to remain in the company house AFTER being fired and your replacement had already started?’ a fifth added.

John Howard was the first PM to make Kirribilli House a full-time home in the 140 years since it was built in 1854.

He also holds the record for the longest time a prime minister has spent in it after a defeat, either at the polls or being toppled in a partyroom coup. 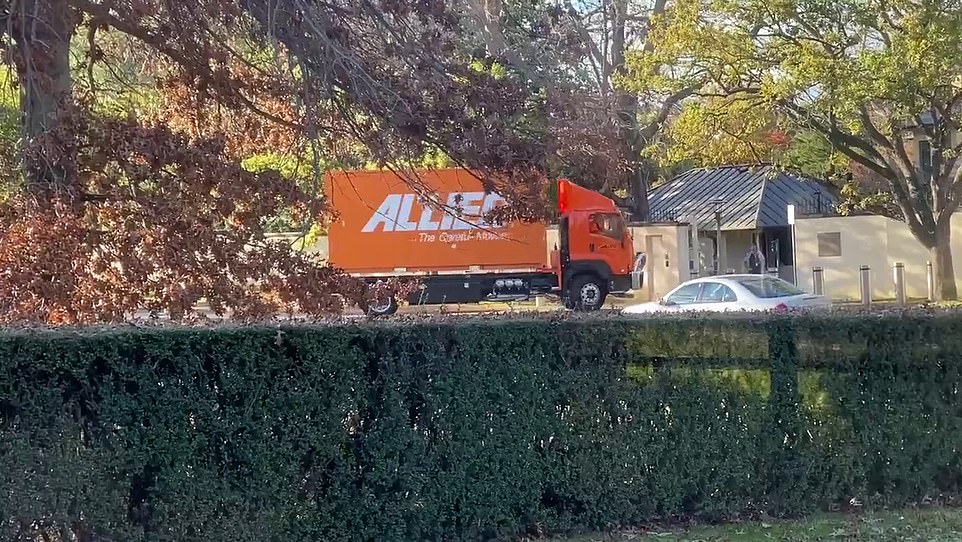 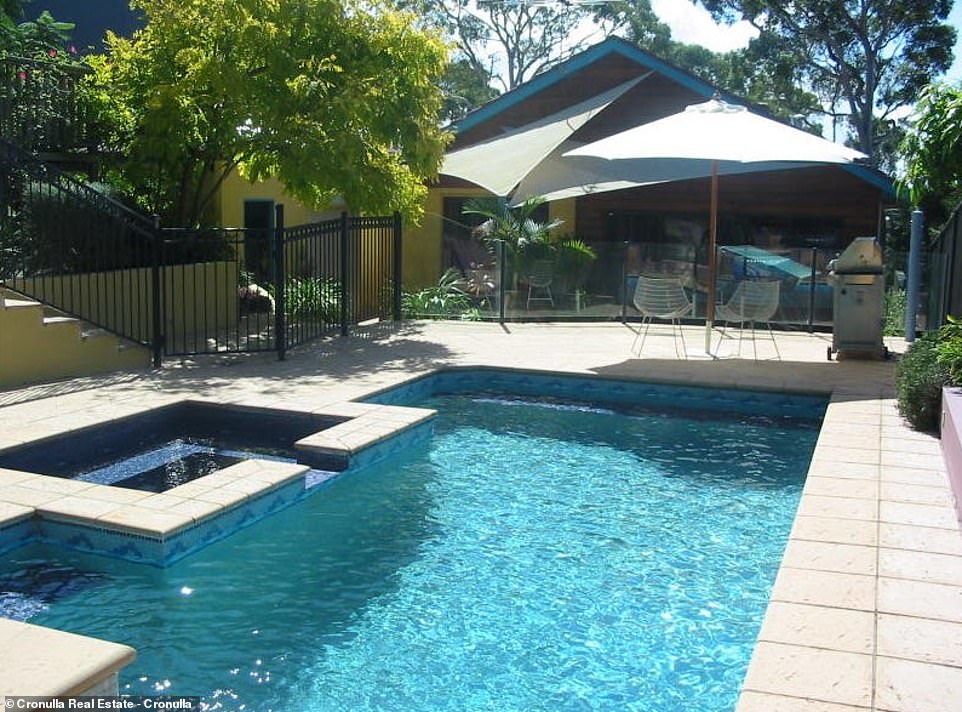 Mr Rudd was rather accommodating to Mr Howard’s family after defeating him in a landslide, saying ‘they should take as long as they need’ to move.

When Mr Rudd was in turn ousted on June 24, 2010, by his deputy Julia Gillard, he took just five days to pack up and get out of The Lodge, where he primarily lived.

Ms Gillard refused to move into either Kirribilli or The Lodge until she was chosen by voters at an election, and stayed in her Canberra flat or Melbourne house, leaving eight staff idle while costing taxpayers $12,000 a week.

After winning the 2010 election and then being ousted on June 27, 2013, in Mr Rudd’s revenge return, she left The Lodge six days later. 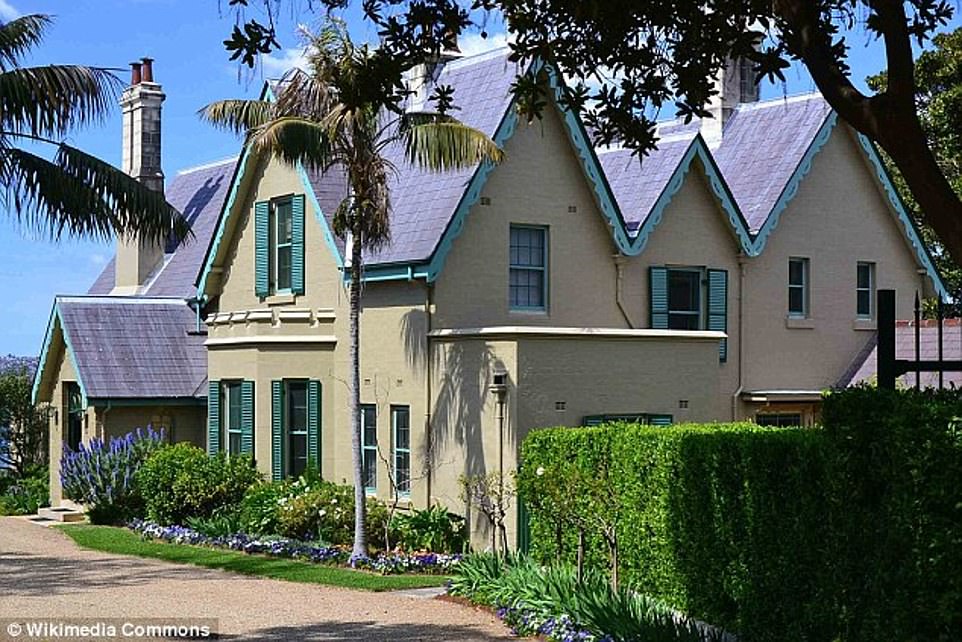 Mr Morrison  doesn’t have long until he reaches John Howard’s record of 16 days, set in November to December 2007, of staying in Kirribilli House (pictured) after losing an election 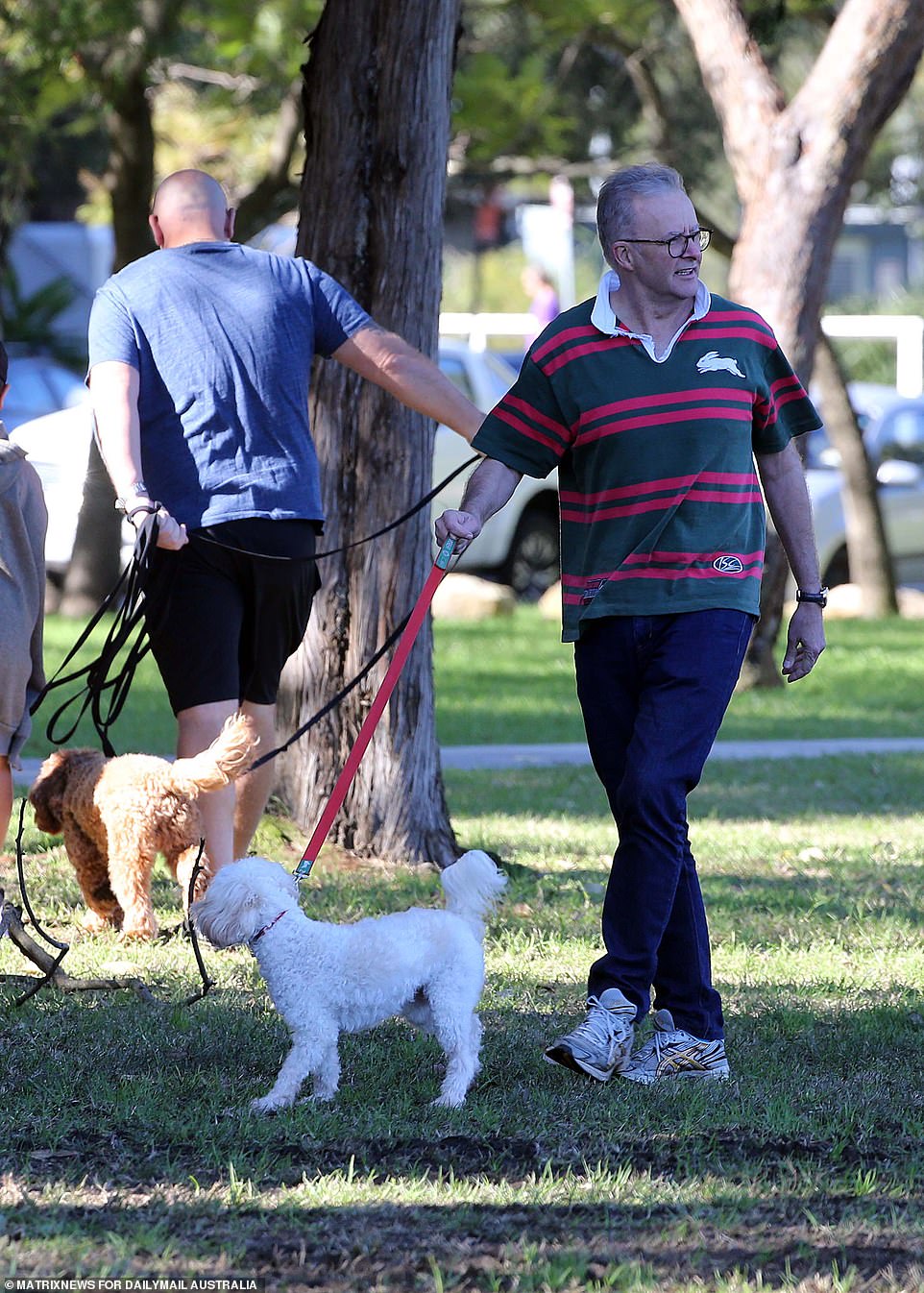 Mr Albanese is still at his own home in Marrickville, and is often seen taking his dog Toto for a walk around the neighbourhood

Mr Rudd immediately ditched the brightly coloured lounge covers Ms Gillard had made for the prime ministerial sitting room in Kirribilli, but was soon turfed out himself at the 2013 election.

The victorious Tony Abbott preferred to live at his home in Forestville, on Sydney’s northern beaches, and commute to Kirribilli but eventually moved in due to security concerns.

He took less than 72 hours of being ousted by Malcolm Turnbull on September 15, 2018, to vacate, but Mr Turnbull never moved in as he preferred his palatial Point Piper mansion.

Kirribilli House was never used as an official residence of the PM until Mr Howard’s reign in 1996, with all before him being based solely at The Lodge.

The mansion was gradually renovated over the preceding decades and used for official functions and to accommodate visiting dignitaries, then by Bob Hawke and Paul Keating for weekend getaways. 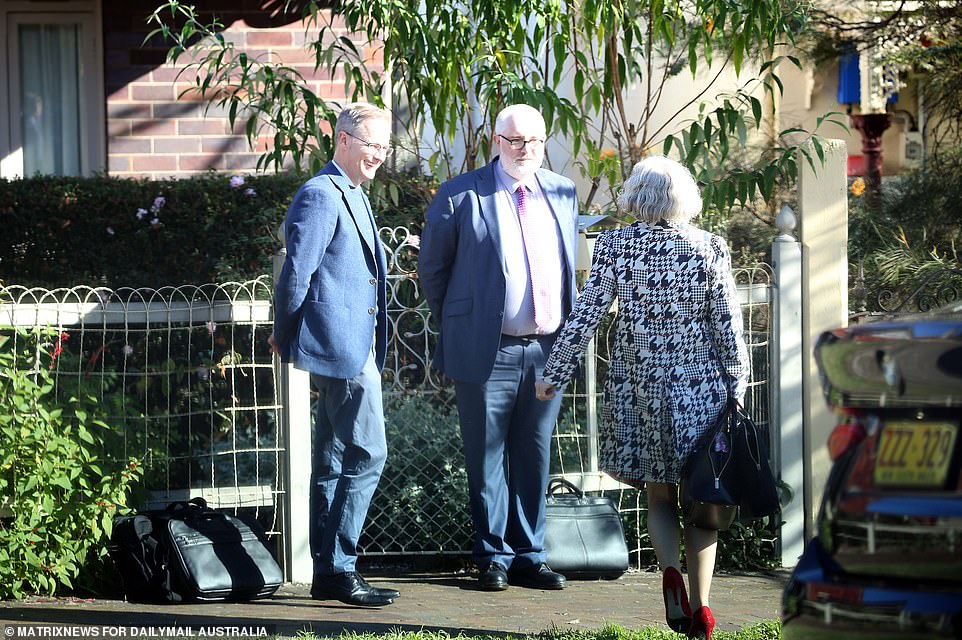 Labor has been taking the high road on Mr Morrison’s delayed departure with Graham Perrett, who was shadow parliamentary secretary since 2014, saying the family should have all the time they need to transition.

‘I think we should respect the service Scott Morrison has given this country,’ he told Daily Mail Australia four days after the election.

‘He’s got kids, he’s got a family, I don’t think the prime minister is in any hurry.’

Mr Morrison and his family will not be uncomfortable in their Sutherland Shire house.

The Morrisons bought the Port Hacking home, which features polished floors and an unusual pine ceiling over the main living area, along with a pool, covering 696sqm, in July 2009 for $920,000.

It is several blocks away from Dolans Bay, west of Cronulla Beach, and across the water from Royal National Park, a popular camping and hiking area.

Houses around Cronulla now typically sell for more than $3 million. 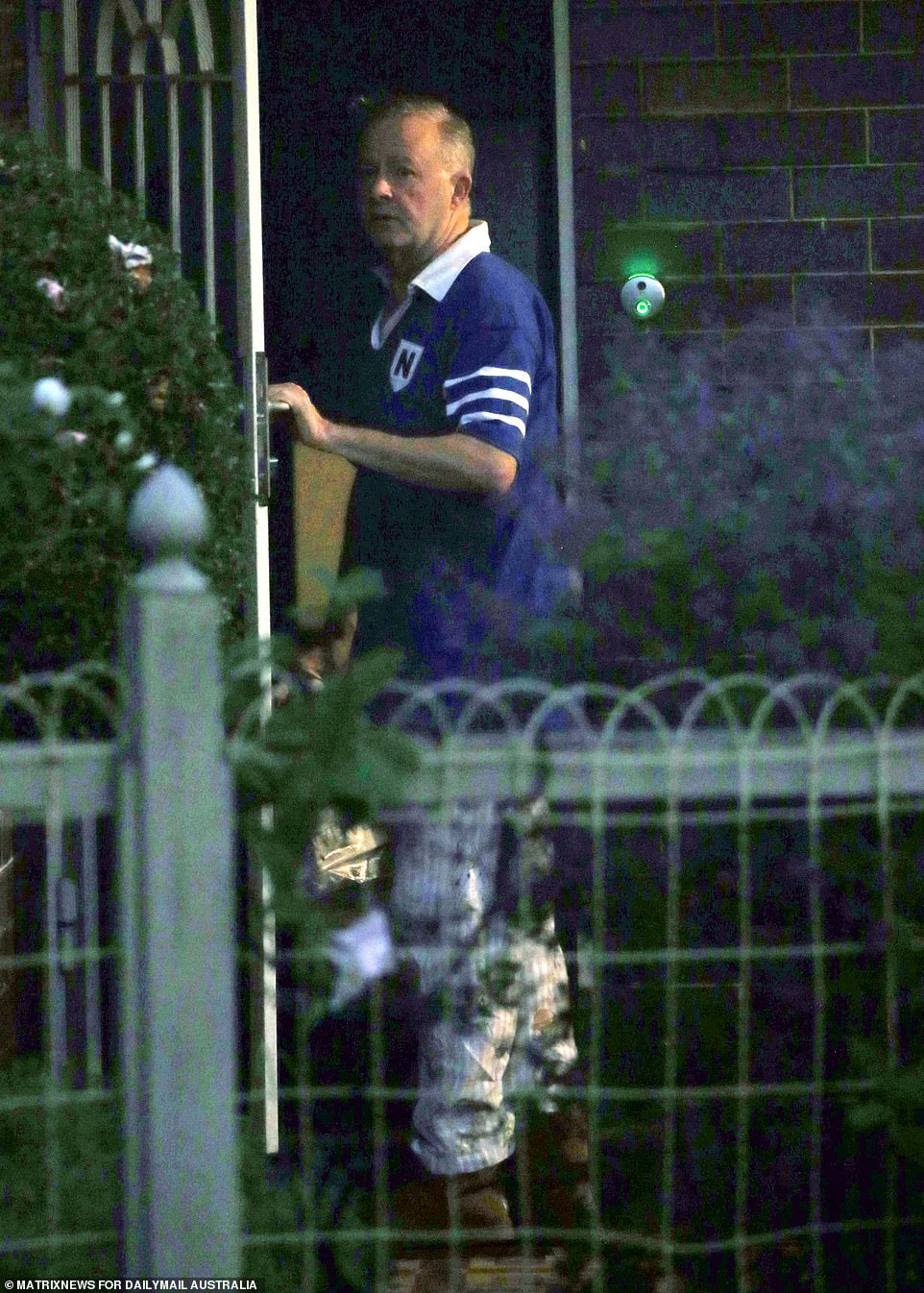 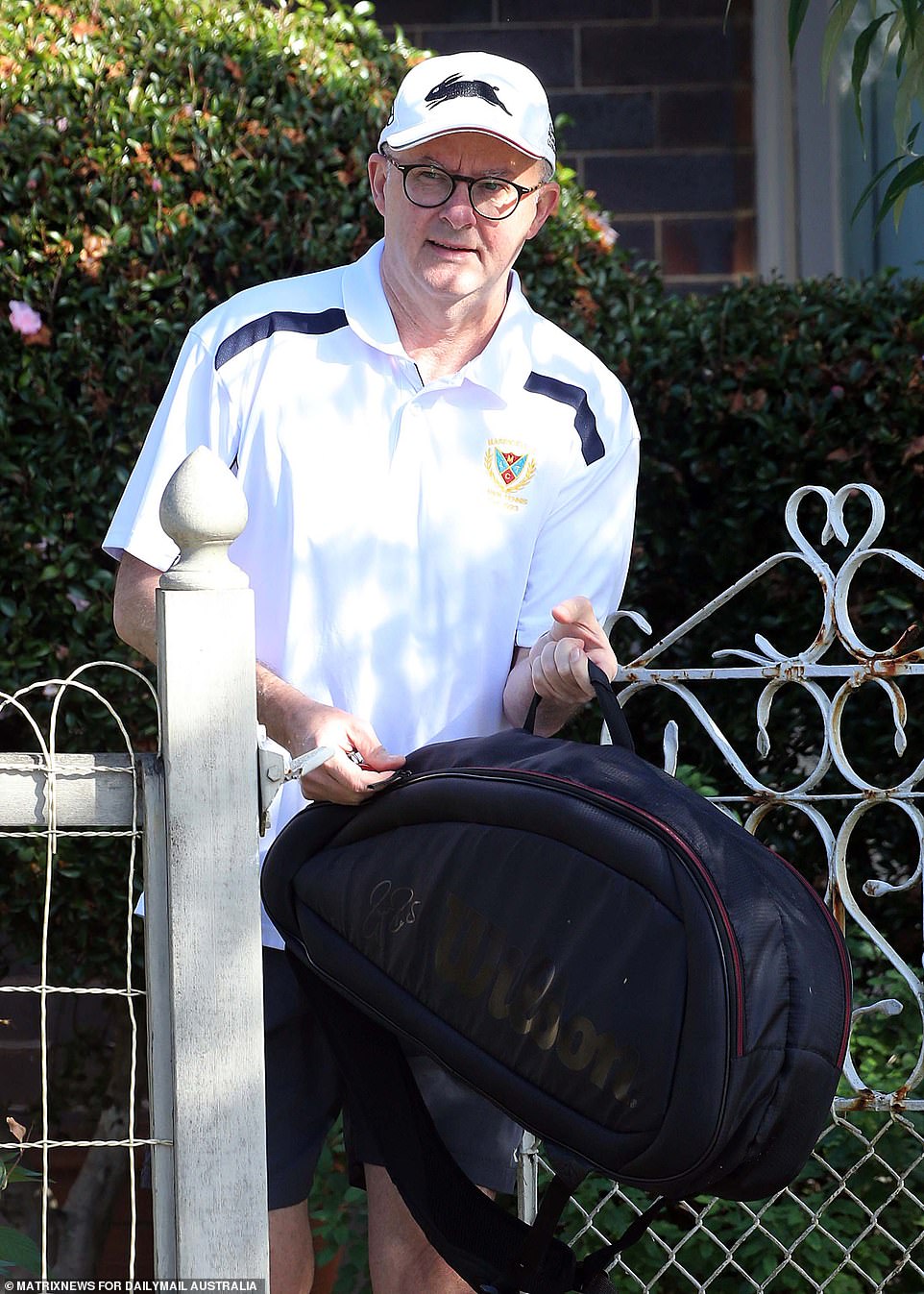 Mr Morrison said last Thursday that he wasn’t planning to retire from politics and was looking forward to being a local MP again.

‘I’m going back to the [Sutherland] Shire and reestablishing our life back there getting the girls back into their routine,’ he said.

‘I’ve just dropped them off at school this morning. And, and that’s, you know, that’s looking forward to being a dad again, it’s been a while since I’ve been able to spend as much time as I would have liked with the family.’

Mr Morrison told colleagues he may spend the whole next term on the backbench and planned to take leave soon to spend school holidays with his wife and daughters.