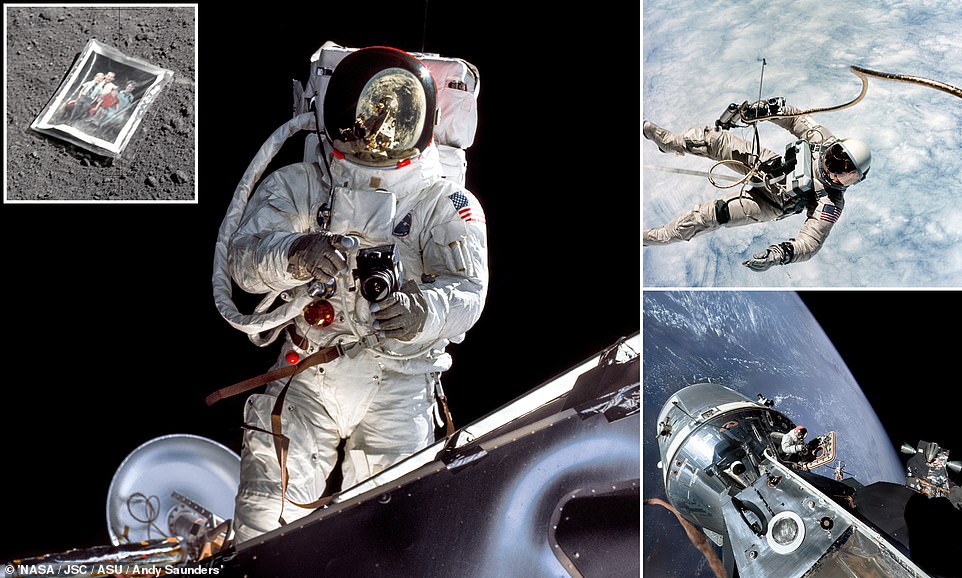 Mankind’s giant leap as never seen before: 35,000 photographs from NASA’s original Apollo moon missions are unlocked from the freezer for the first time in fifty years and restored pixel by pixel to reveal real out-of-this world images of life in space

Man aspired to go to the Moon, John F, Kennedy said, ‘not because it is easy, but because it is hard.’ And photo restorer Andy Saunders has applied that same incredible ambition and determination to painstakingly rework 35,000 photos from the Apollo missions that had been stored in a locked NASA freezer until now. 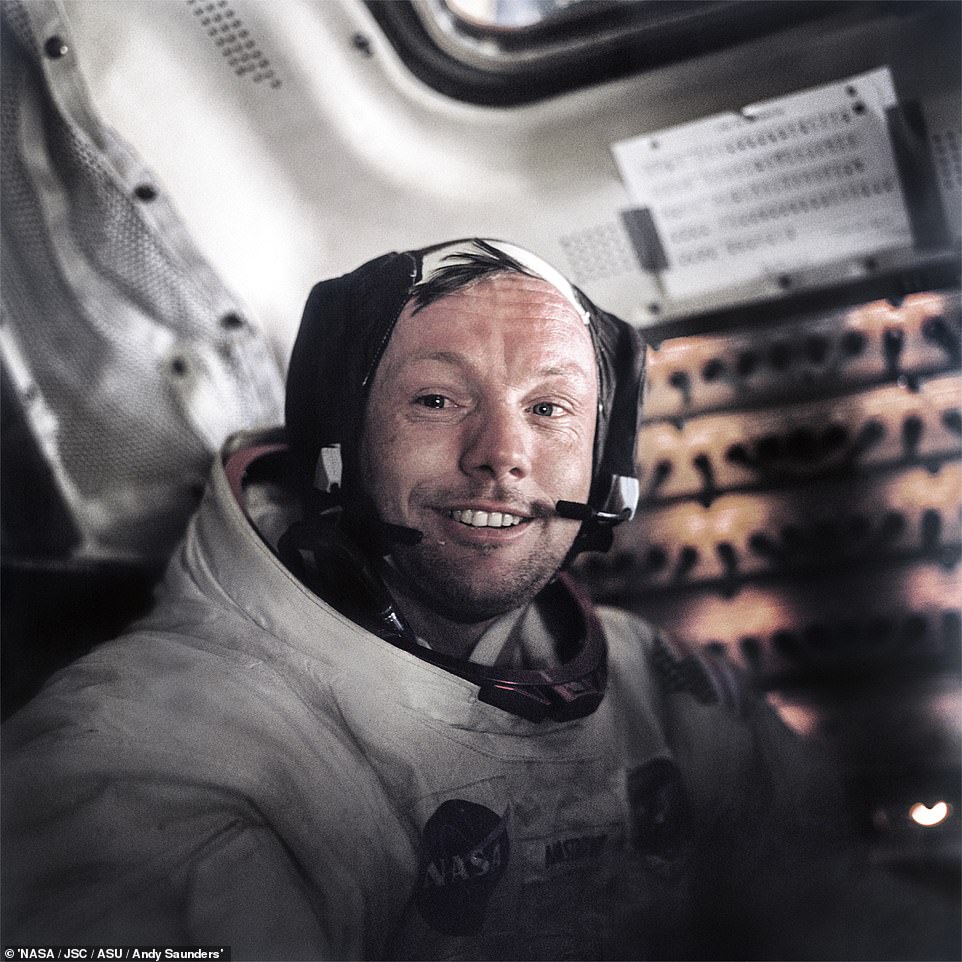 The hauntingly beautiful images kept under lock and key at Johnson Space Center, Houston, show amazing new insights about life on board the rockets and on the surface of the moon. Pictured: Neil Armstrong is captured by Buzz Aldrin moments after their historic space walk in 1969, revealing the emotion on the astronaut’s face. It appears as if there is a tear in his eye. 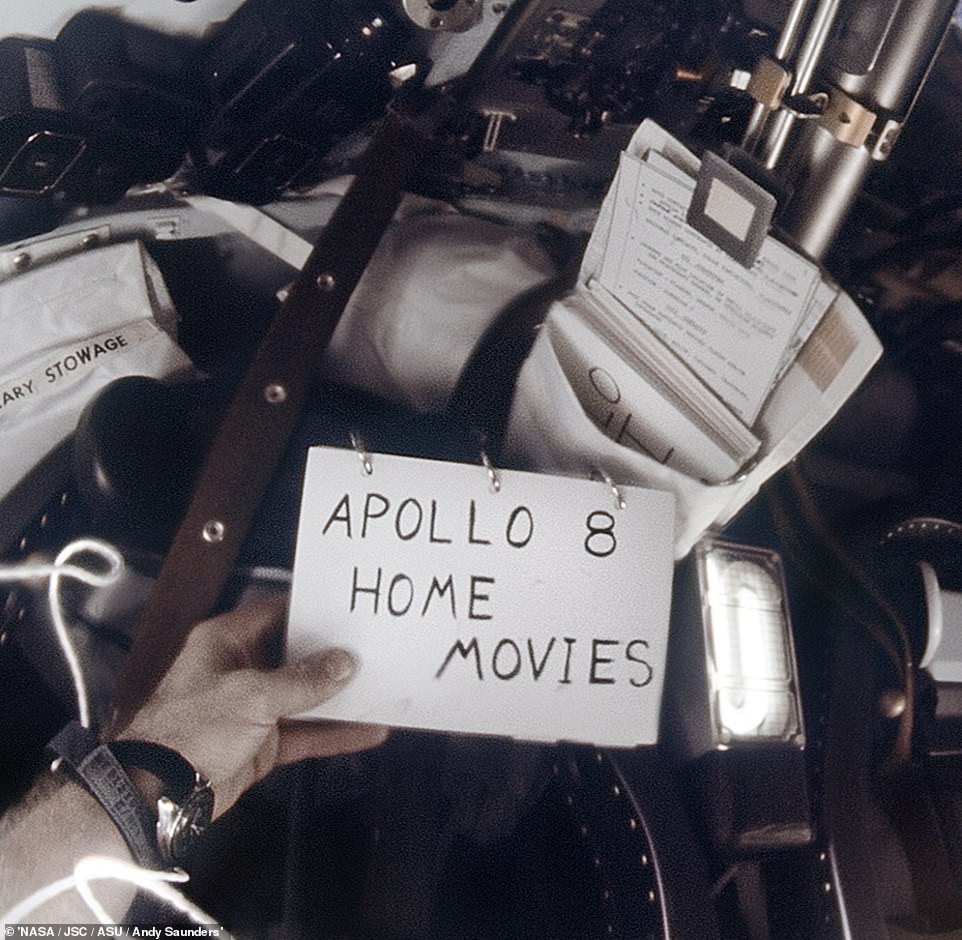 Since the footage was kept in the vaults for so long, almost every Apollo image has been based on copies of the master duplicates of the originals, leading to a gradual degradation in quality. 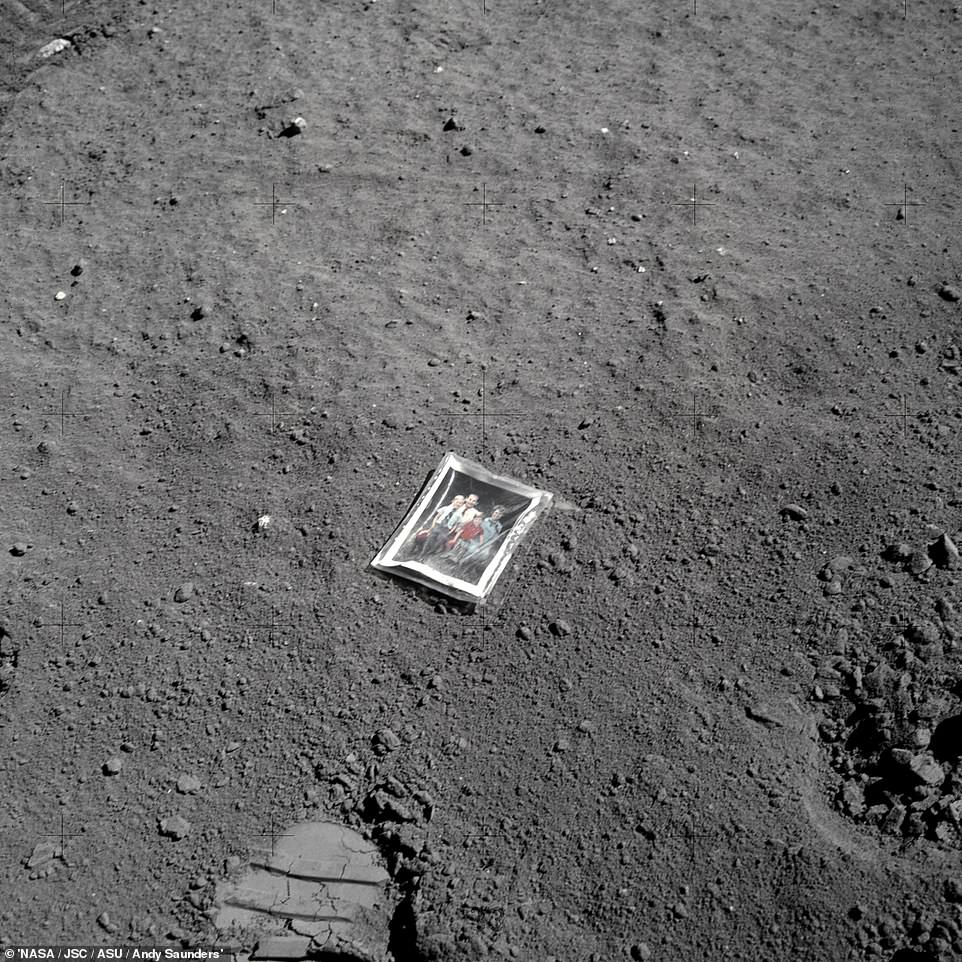 Now, with his access to the source film material, Saunders has been able to shine a light on a dark corner of space and modern history, and the trove has now been branded the ‘ultimate photographic record of humankind’s greatest adventure’. Pictured: Charles Duke leaves a photograph of his family on the surface of the Moon, with his footprint clearly seen nearby. He wrote on the back of it: ‘This is the family of Astronaut Duke from Planet Earth. Landed on the Moon, April 1972.’ He said leaving it there was an ’emotional moment’. 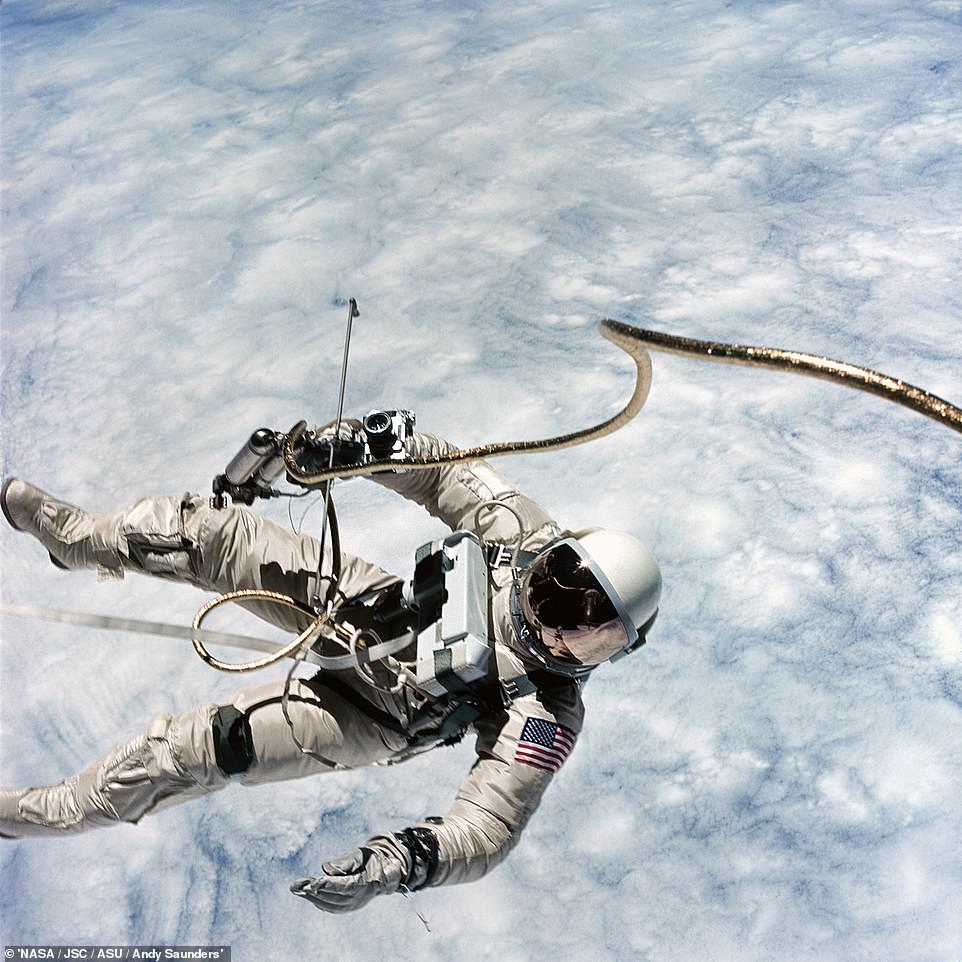 The film was taken during the Apollo missions from 1962 to 1972, including the only clear image of Neil Armstrong on the Moon, and it has taken Saunders, 48, more than a decade to restore the set pixel by pixel. Pictured: On Apollo 8, Bill Anders used a ‘clapperboard’ for his onboard home movies in the rocket. Pictured right is the original image before Saunders’ restoration. Pictured:  The first portrait of another human in space showing Ed White leaving the aircraft of Gemini IV in 1965.

Since Armstrong held the camera, before the restoration there was no image clearly showing the astronaut on the natural satellite. There is also the first clear photo of life inside the doomed Apollo 13 mission that saw the astronauts forced to return to earth in the Lunar Module, as well as images of the golf ball hit by Alan Shepard on the Moon. The astronaut joked on his return it flew ‘miles and miles’ but the photo shows it actually traveled around 40 yards. The contours, craters and features on the surface of the Moon are also illuminated as it passed in front of the Sun on Apollo 11 – a moment Armstrong said was the most beautiful thing he’d ever seen. 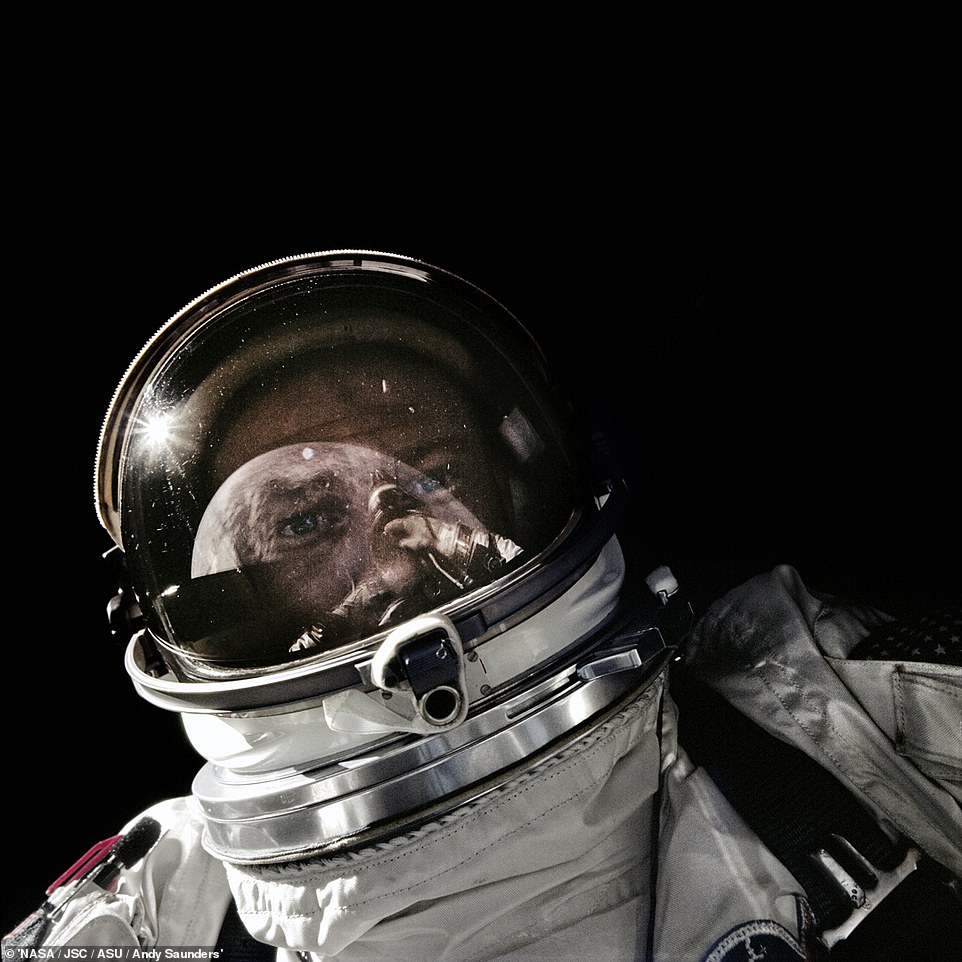 Saunders, a property developer from Cheshire, left his job to devote all his time to reworking the images in the secret archive. The digital archaeologist used high-definition scans of the original film material, and applied modern digital editing and enhancing techniques to make the photos as clear and crisp as possible. He told the BBC: ‘There’s no reason why we shouldn’t be seeing these important moments in history in anything other than incredible quality, because they used the best cameras, the best lenses, and the best film that was processed in the most advanced photo lab available. It doesn’t make any sense.’ All the 16mm film footage was captured by astronauts during the missions. Pictured: Buzz Aldrin takes the first ever selfie in space in 1966 during the Gemini XII mission, showing the sun reflecting off his visor. 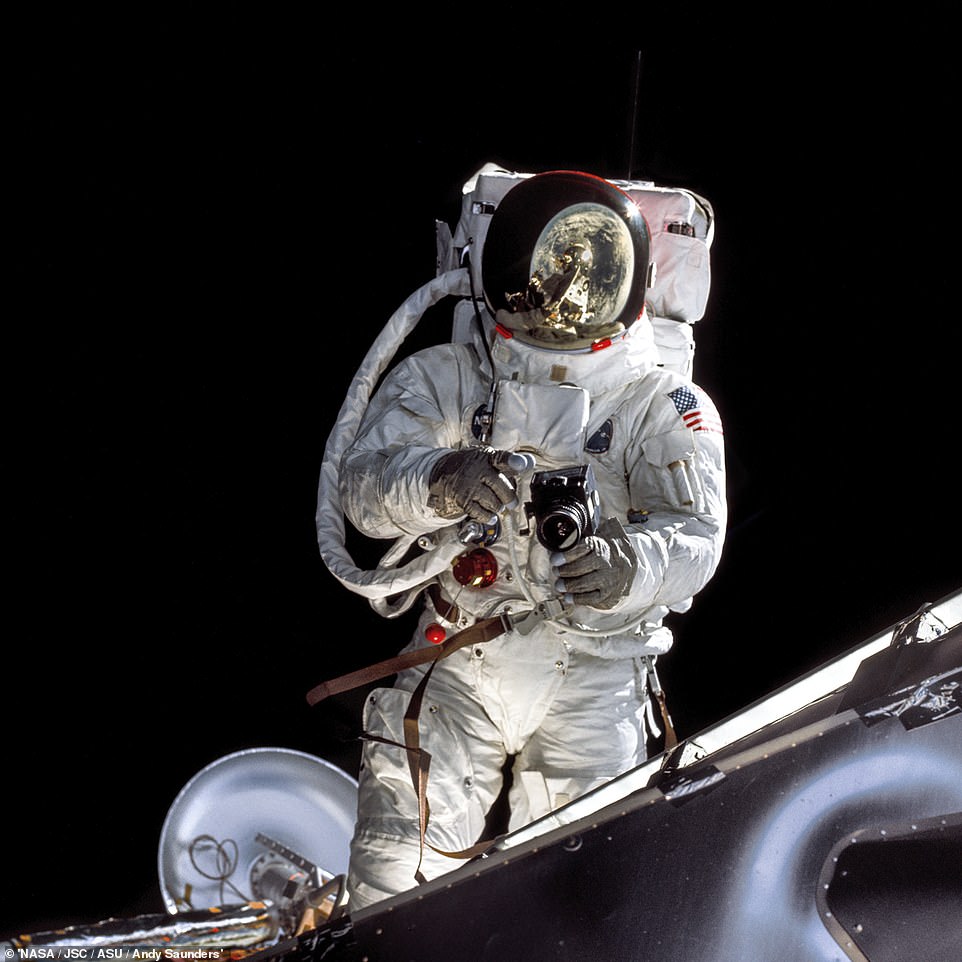 Saunders uses a ‘stacking’ technique to produce a highly detailed image after layering and processing multiple frames. The process has allowed him to reveal things which were not seen in the previous film footage. Pictured: David Scott is reflected back at himself in Russell Schweickart’s visor on Apollo 9 on their ten-day mission. 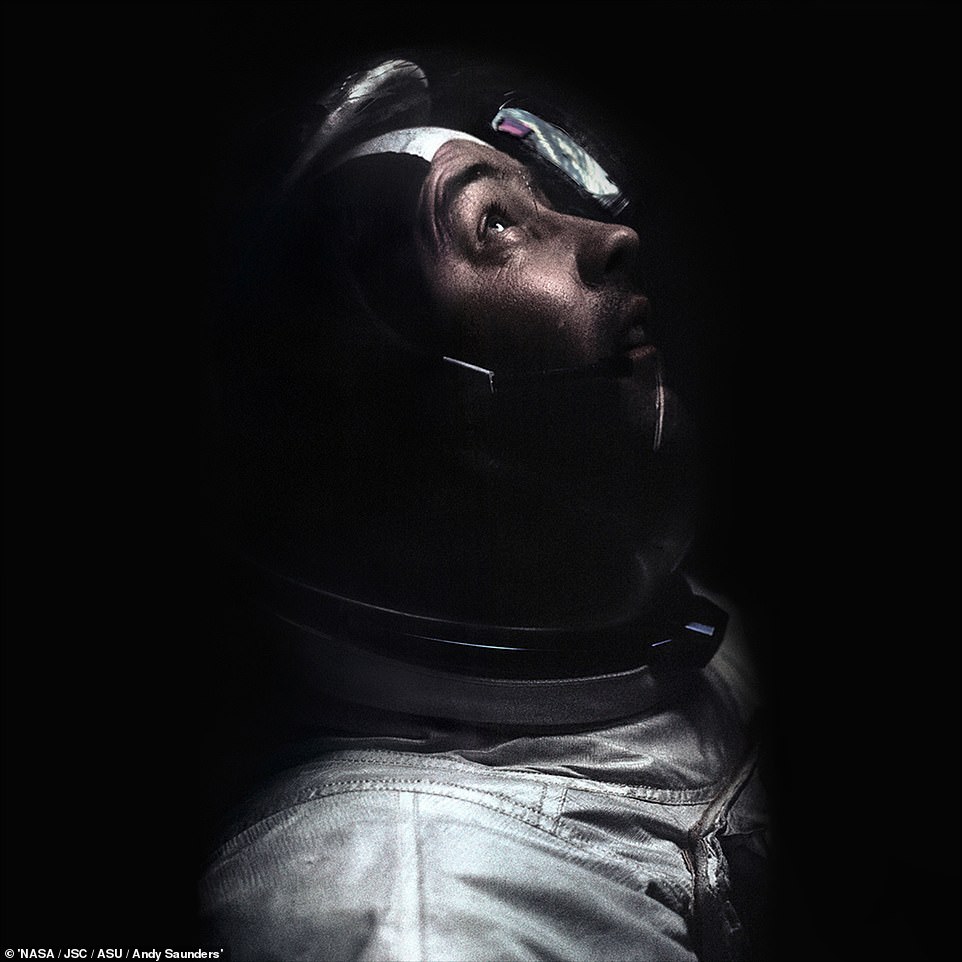 In one scene (pictured), a speck of light from the underexposed image which appeared to be a window reflection turned out to be Apollo 9 commander Jim McDivitt in his helmet about to dock two spacecraft. Saunders said: ‘It’s just an absolutely stunning portrait of an Apollo astronaut in 1969, apparently almost looking up in wonder through the window. In reality, it’s even better than that because McDivitt is actually in the process of undertaking the docking, and the stakes were very high. This was the first time we’d had humans in a spacecraft incapable of getting them home, because they were testing the lunar module and it didn’t have a heatshield. So, if they didn’t make this docking, they couldn’t have come back. It’s an incredibly precious moment, an intense moment, a historic moment.’

Saunders has spoken with astronauts and trawled through voice recordings to pick up on details about light and color to make the photos as realistic as possible. They described the eerie blackness of the sky and the brightness of the sun, which he has recaptured in the images. Pictured: Fred Haise tries to sleep in the cold module of Apollo 13 in 1970.

Tim Peake told The Guardian: ‘When I look at these remastered images of the Apollo missions, I’m reminded of what I experienced during my six months in space.’ The images feature in a new book, Apollo Remastered, which is published tomorrow by Particular Books. Saunders can also be found on Twitter and Instagram. Pictured: David Scott is seen in the command module hatch of Apollo 9.