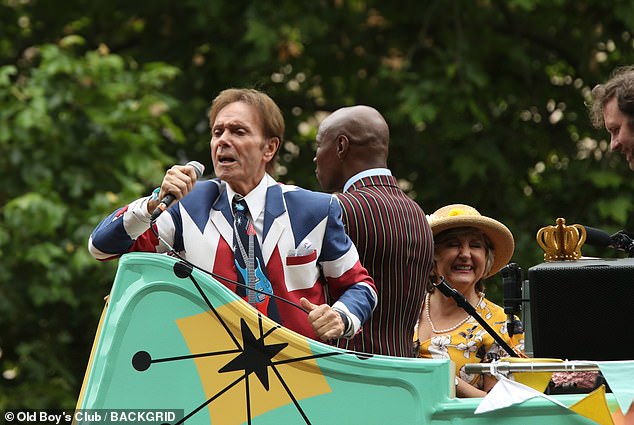 Sir Cliff Richard finally got the chance to perform at the Queen’s Platinum Jubilee celebrations on Sunday, singing from an open-top bus.

The music icon, 81, who previously revealed he had not been invited to perform at Saturday’s Platinum Party At The Palace, proudly took the microphone to perform as a horde of buses filled with British national treasures from every decade of the reign of the queen rode down. Mall for the Platinum Jubilee Pageant.

The star, who was on the 1950s bus, donned a Union Jack suit and looked delighted as he joined stars like Chris Eubank and Katherine Jenkins on the bus.

Sir Cliff was one of 100 National Treasures riding in the capital with other celebrities including Shirley Bassey, Jeremy Irons, Jayne Torvill and Christopher Dean, Gary Lineker, Bill Bailey and Basil Brush.

The music icon who previously performed at both the 2002 Golden Jubilee and 2012 Diamond Jubilee spoke of his grief at not joining the glittering lineup for Saturday’s concert, which included Diana Ross, Queen and Elton John.

When he appeared in Sky News on Sunday, he was asked: ‘And you did that in 2012, I remember very well, at the Diamond Jubilee. Do you remember that moment? 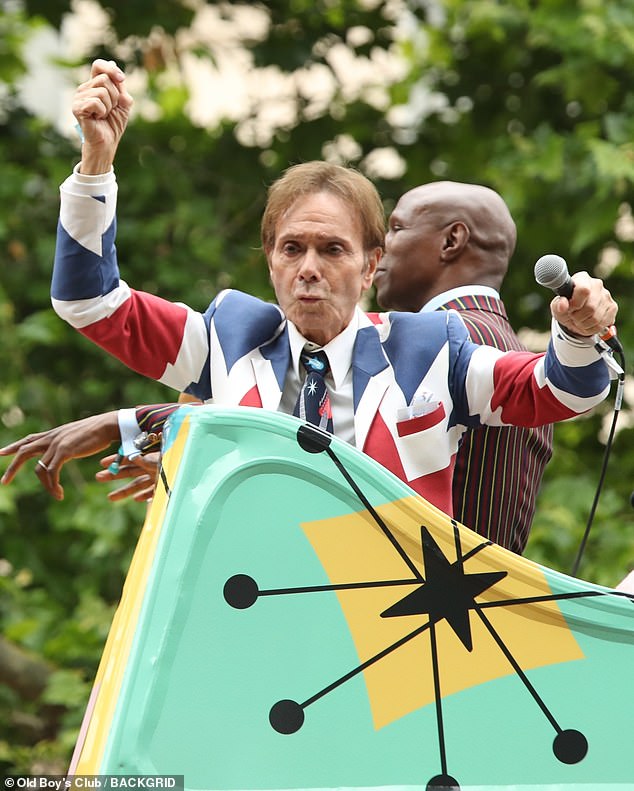 Going for it: The music icon, 81, who previously revealed he wasn’t invited to perform at the Platinum Party At The Palace on Saturday, proudly took the mic to perform 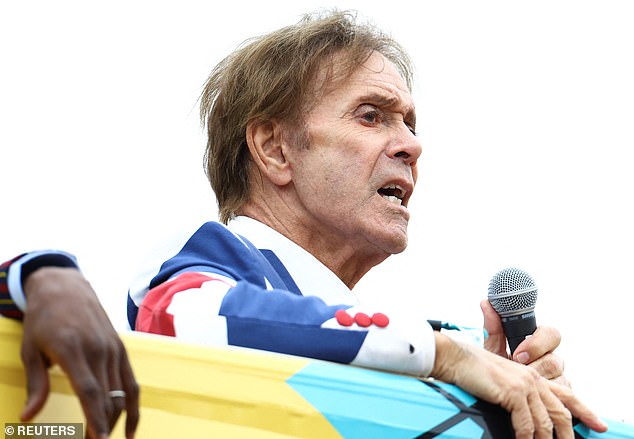 Icon: Sir Cliff was one of the 100 national treasures that passed through the capital, along with other celebrities including Shirley Bassey, Jeremy Irons, Jayne Torvill and Christopher Dean, Gary Lineker, Bill Bailey and Basil Brush. 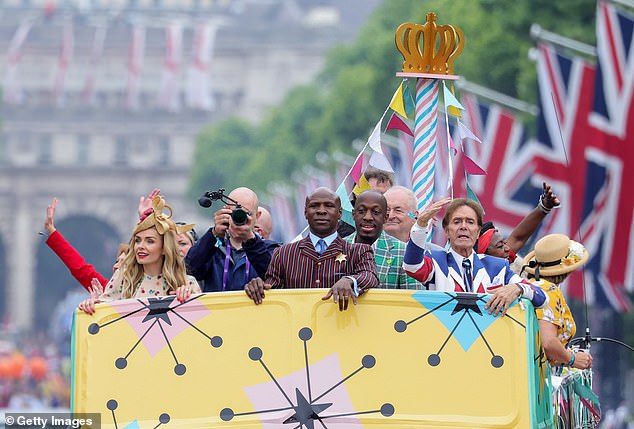 Fun times: Katherine Jenkins and Giles Terera were also on the bus 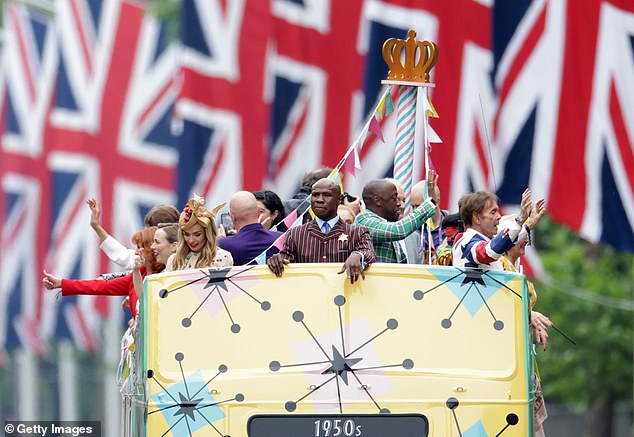 Wave: The National Treasure waved to fans as it drove through The Mall

He replied, ‘Yes, it was great. All I want to say now is that the show I saw last night was probably the highest-produced show ever for the Queen.

“They must have spent millions on the lighting and it was just fantastic and I was a little jealous that I wasn’t invited to sing as I would have loved to have had one photo in front of the illuminated palace.”

Later on the BBC he said: ‘I was disappointed not being able to get on stage, the production of the show this year has been absolutely phenomenal. 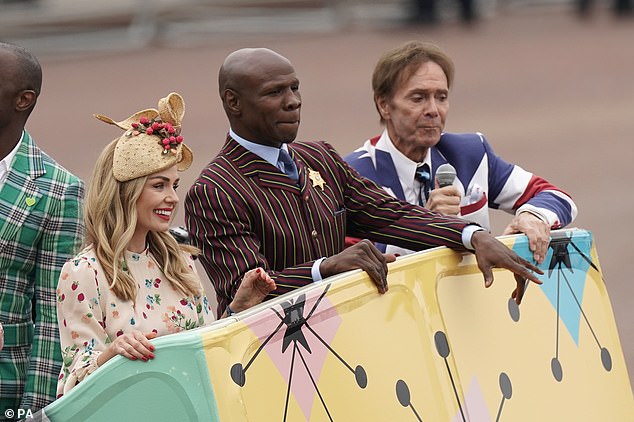 Musical moment: Cliff took a moment to soak up the atmosphere during his performance 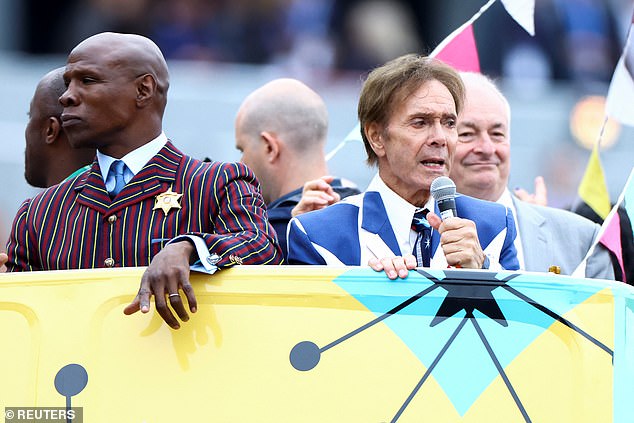 Tuneful: The music icon looked in his element when he went to the microphone 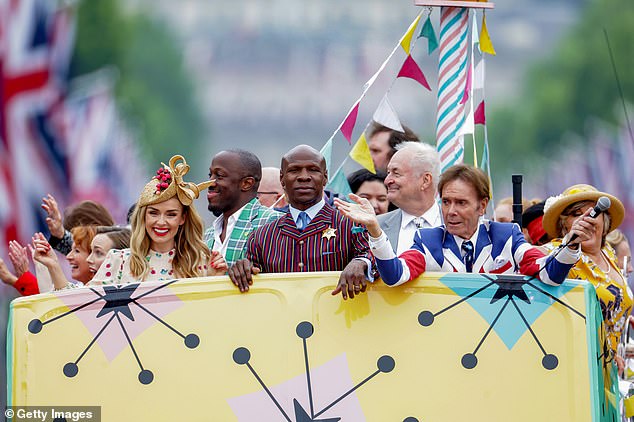 Good to see you: Cliff was in a good mood as he waved to the crowd 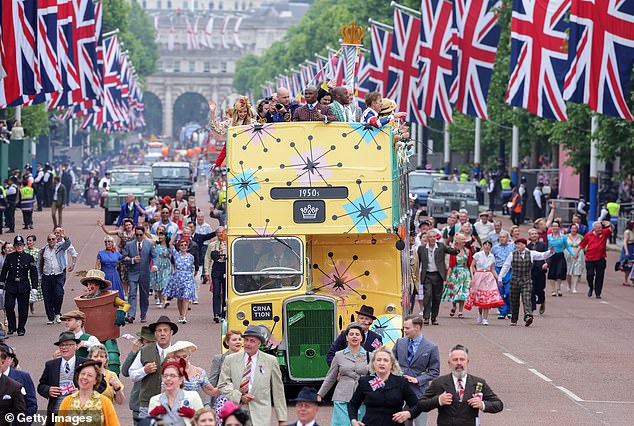 Patriotic: The mall was full of people dressed in 50s costumes

“I turned green with envy and thought I’d like to have one photo against the palace. But it wasn’t my turn and the young boys took over, and rightly so.’

Two bus enthusiasts also outlined how much work it took to get their bus ready for the election.

Ivan Fisher told the PA news agency, “This is our bus’s first major event since we’ve owned it. We had to go through and change all the tires, especially to get here. 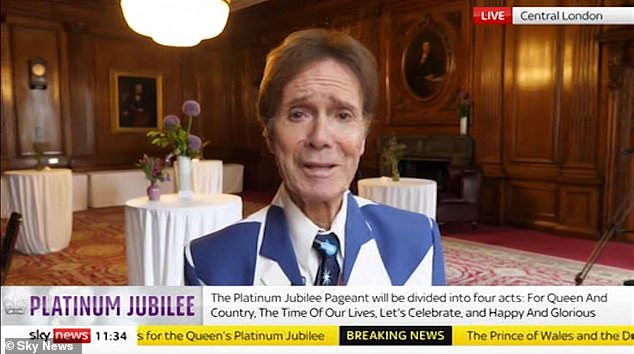 Oh dear: Sir Cliff revealed his disappointment at not being asked to perform at the Queen’s Platinum Party At The Palace on Saturday 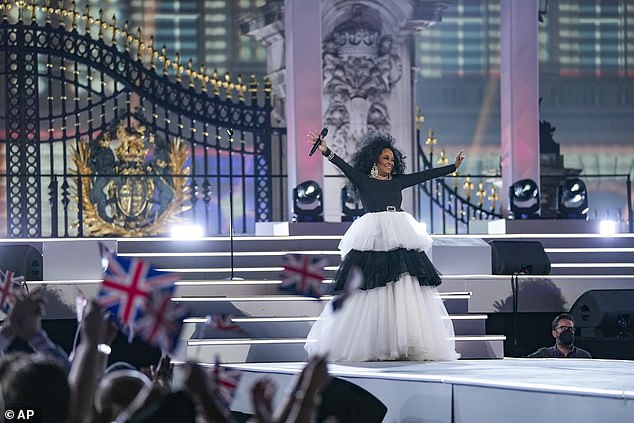 Not to be: The music icon who previously performed at both the 2002 Golden Jubilee and 2012 Diamond Jubilee, spoke of his grief at not joining the glittering lineup that included Diana Ross, Queen and Elton John

“The buses were both roadworthy to go, except for the tires, so they had to be changed.”

Explaining why they decided to participate, Richard Dixon said, “You can’t say no to participating in this event. It’s such a great day.’

Both buses will be filled with celebrities from every era, but the two men said they were more excited to participate in the event itself than to meet celebrities.

Mr Fisher said: ‘I’d like to be involved in the pageant and really do it for the Queen, because I’m a great royalist, so anything royal is what I love. It would be nice to wear one of them (celebrities).’ 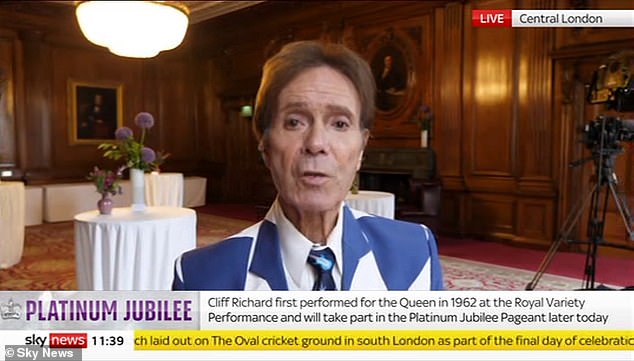 He said: ‘They must have spent millions on the lighting and it was just fantastic and I was a little jealous that I wasn’t invited to sing as I would have loved to have had one picture in front of the palace lit up like that’ 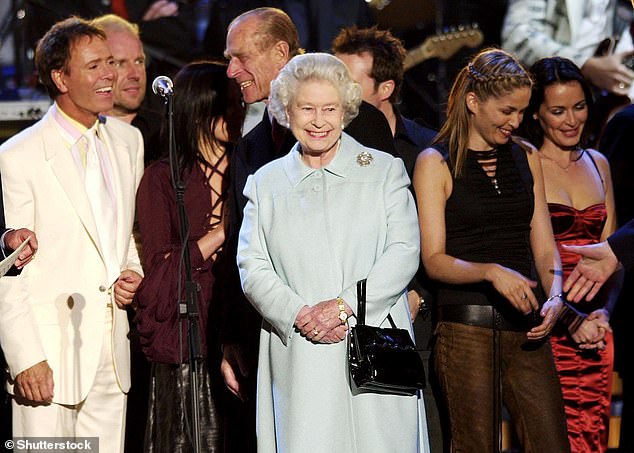 Royal Parade: Cliff Is Pictured At The Golden Jubilee Party At The Palace 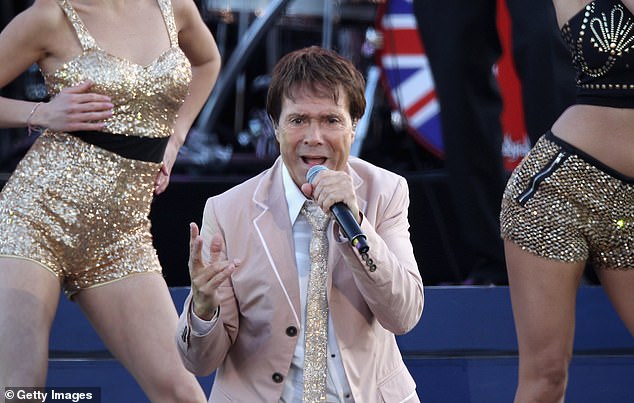 Back again: Cliff took center stage at the 2012 Diamond Jubilee celebrations – where he performed. Congratulations

said Mr. Dixon. ‘On the 1953 bus we have Sir Cliff Richard, I look forward to meeting him.’

The highlight of the three-hour concert was Diana Ross, who took the stage in an incredible black and white tulle dress at Buckingham Palace to celebrate the Queen’s Platinum Jubilee for her first UK appearance in 15 years.

The 78-year-old singer of The Supremes kicked off her performance with a rendition of Chain Reaction, which she sang backed by a talented choir as a glitter ball was projected onto the palace.

In a beautiful tribute to the Queen’s 70th reign, Diana also exclaimed Thank You as the words flashed on the giant screen behind her and the crowd eagerly waved their Union Jacks in the air.

The 22,000-strong crowd then erupted into deafening cheers as Diana stepped into No Mountain High Enough, and Kate Middleton looked momentarily awed as she sang along from the Royal Box. 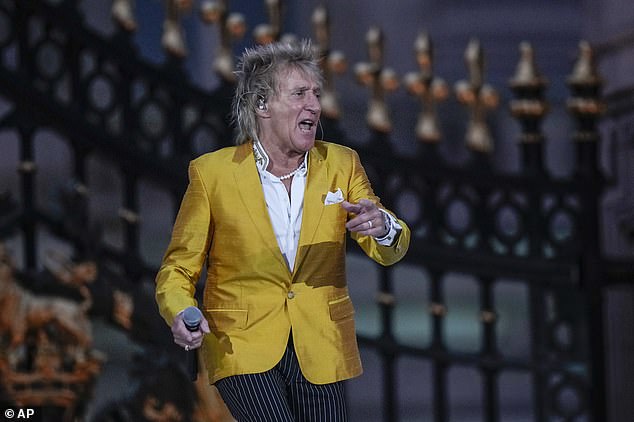 Looks good: Sir Rod, 77, is vividly depicted in a bright yellow suit jacket during the concert 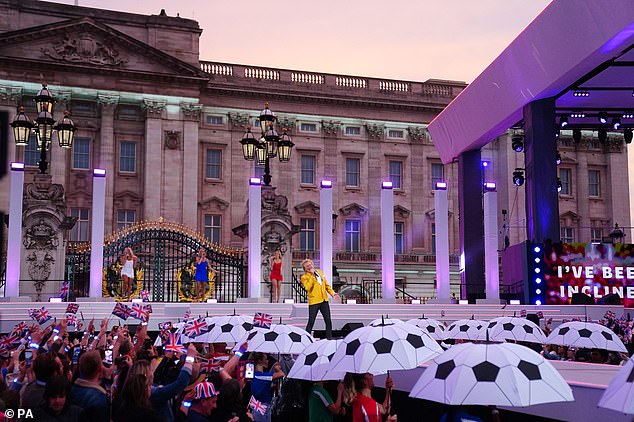 Exciting: Sir Rod was welcomed on stage as a ‘rock legend’ and started singing Baby Jane along with three backing singers, wearing dresses that reflected the colors of Union Jack 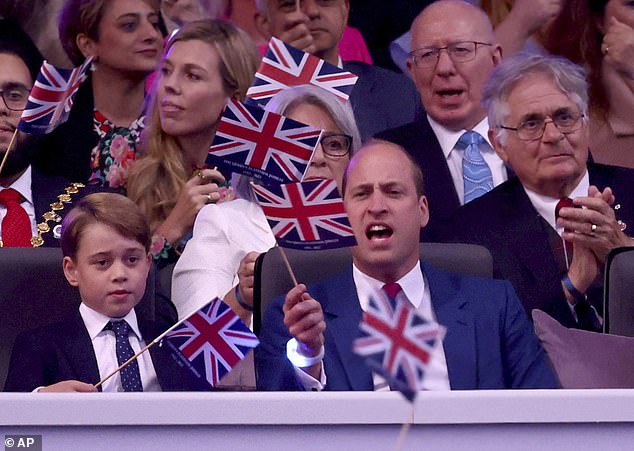 Love it: William and his son George seemed to enjoy Rod’s performance as they sang the song from the royal box, just like Kate

Closing out the show, she said, “I’m so proud and happy to share this evening with you!”

Earlier in the evening, Sir Rod Stewart failed to get the 22,000-strong crowd outside Buckingham Palace dancing to an incredible mishmash of his top songs to mark the Queen’s 70-year reign.

He put on a lively show in a bright yellow jacket, which he teamed with black striped trousers and a crisp white shirt for the bang.

The singer shouted out Baby Jane in his recognizable raspy vocals alongside three backing singers, who wore dresses that reflected the Union Jack colors 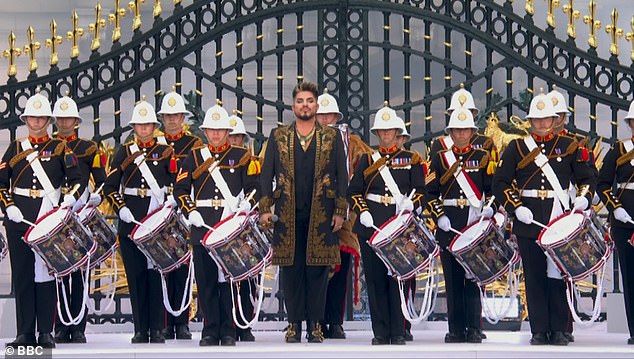 Rocking: The BBC’s Party At The Palace kicked off Saturday night with a spectacular performance by Adam Lambert and Queen