Skeletons of 76 children who were sacrificed in six different murders in 450 years have been found in Peru: in one grave, five girls were found sitting head to head in a circle

A gruesome scene of 76 skeletons of children sacrificed more than 450 years ago has been discovered in Peru, with one grave featuring five young females sitting head to head in a circle.

The remains were buried in two mounds and all the children, minus the five in one grave, were laid to rest with their feet to the east and their heads to the west, which is a repeating pattern in such sacrificial tombs by the ancient Chimu community who known for its horrific practices.

This discovery brings the total to 302 sacrificial children found in the area, all of whom died in six different sacrifices from 1050 to 1500.

The reason why these children were murdered is not yet known, but scientists speculate that their lives may have been a gift to the gods.

One grave contained the remains of what experts say are five young girls. They were placed head to head and their bodies formed a circle

The Chimu was a pre-Inca culture that emerged in 900AD from the remnants of the Moche culture along the coast of Peru and this civilization was the largest pre-Columbian empire in Peru until the Inca.

This group is widely known for their innovations in agriculture, such as building large irrigation systems and sacrificing their children.

The tombs were excavated at the Pampa La Cruz archaeological site, located in the Huanchaco neighborhood, Andina reports.

Archaeologists found 25 tombs in Mound I and 51 in Mound II.

The team conducts more investigations to determine how these children were murdered and whether there was any reason other than that they were gifts to the gods of the Chimu. 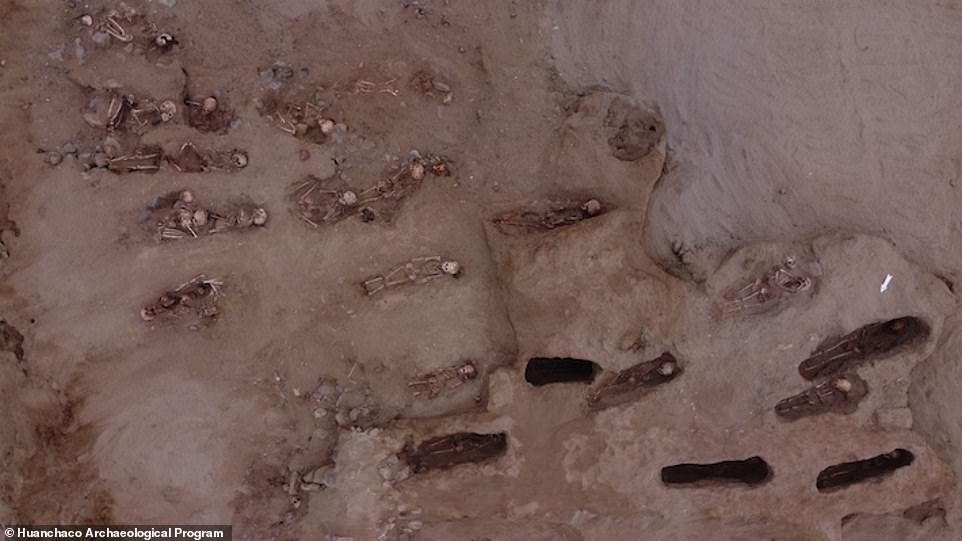 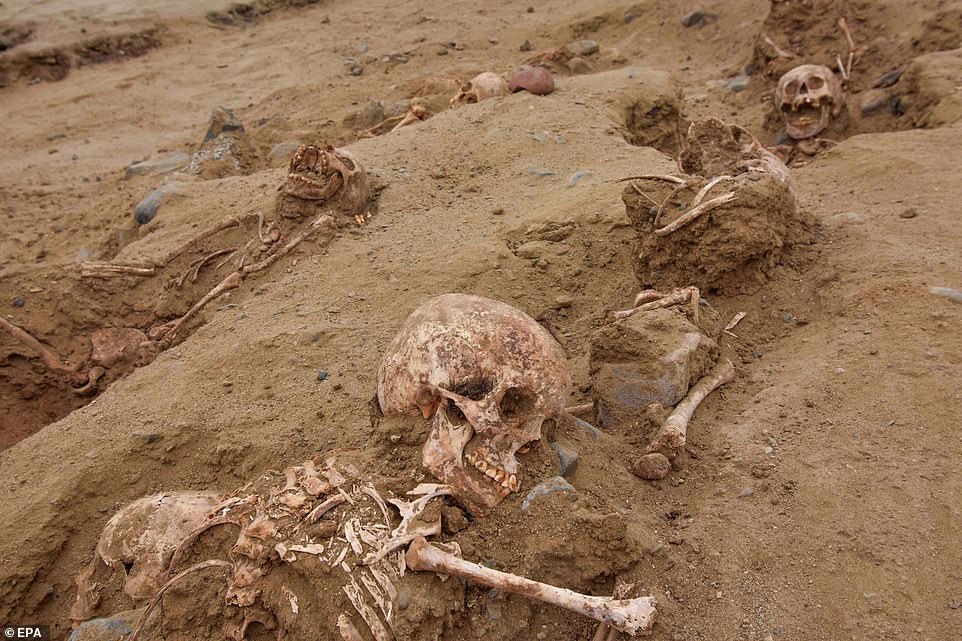 The graves were excavated at the Pampa La Cruz archaeological site, located in the Huanchaco neighborhood, an area where other mass graves of murdered children have been formed. 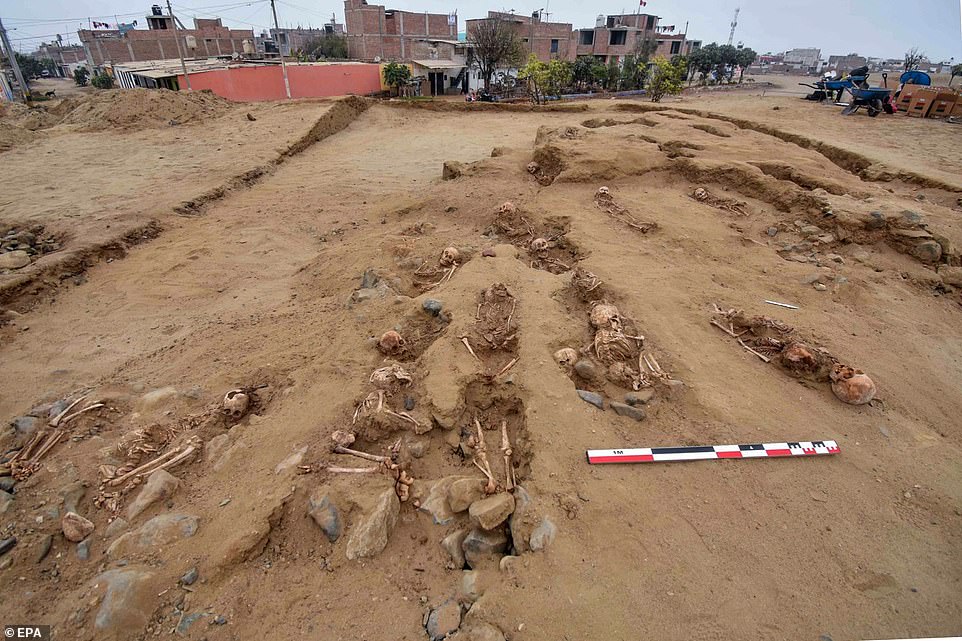 This region is known for mass graves containing children’s remains, the largest of which was uncovered in 2019.

More than 140 boys and girls between the ages of five and fourteen were slaughtered in what is believed to be a mass sacrifice to appease the gods of a now-extinct religion.

Many of the children and young animals had their hearts cut out during the creepy ritual.

An analysis dates all remains to about 11450, during the height of the Chimu civilization in the northern coast of Peru.

Study author John Verano, a professor of anthropology at Tulane University, said, “This site opens a new chapter on the practice of child sacrifice in the ancient world.

‘This archaeological discovery was a surprise to all of us – we had never seen anything like it before, and there was no suggestion from ethnohistoric sources or historical records of child or camelid sacrifice on such a scale in the northern coast of Peru. 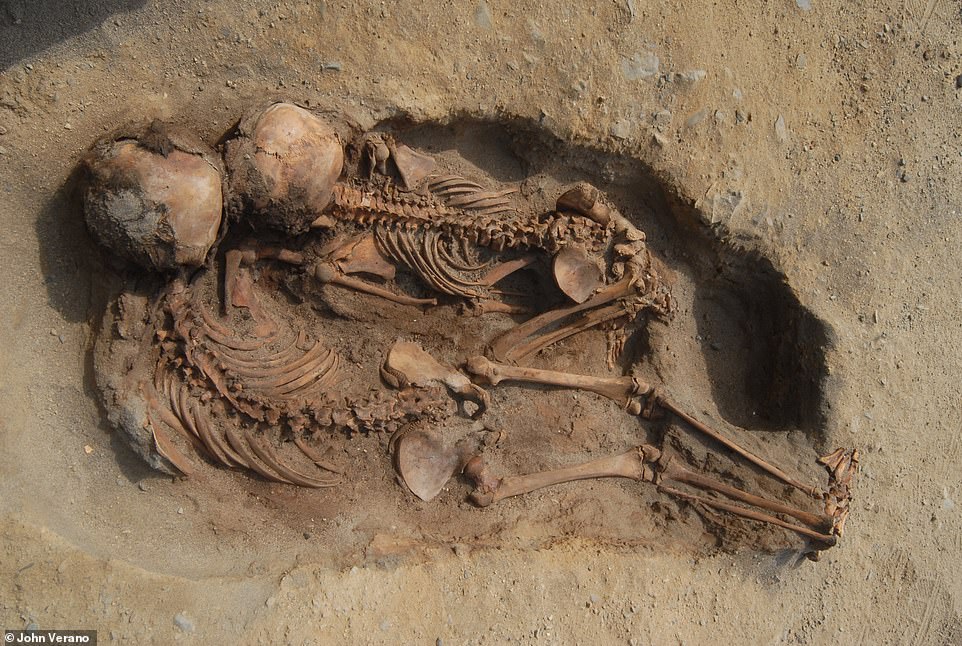 This region is known for mass graves containing the remains of children, the largest of which was uncovered in 2019 (pictured). More than 140 boys and girls between the ages of five and fourteen were slaughtered in what is believed to be a mass sacrifice to propitiate the gods of a now-extinct religion

“We were fortunate to be able to fully excavate the site and have a multidisciplinary field and laboratory team to do the excavation and preliminary analysis of the material.”

Anatomical and genetic tests, published in the journal PLOS One, say cuts across the infants and sternum of llamas suggested that their chests had to be cut open to remove their hearts.

Professor Prieto said: ‘Accessing the heart through cross-section of the sternum is a technique well known to modern thoracic surgeons, and is known by various names.

“The purpose of opening the children’s coffins can only be assumed, but heart removal is a likely motivation.”

WHO WERE THE CHIMU PEOPLE OF ANCIENT PERU?

The Chimu were a pre-Inca culture that emerged in 900 AD from the remnants of the Moche culture along the coast of Peru. It was the largest pre-Columbian empire in Peru until the Inca.

The Chimú culture is thought to have emerged in the first half of the 14th century and developed a complex civilization with varying levels of social hierarchy.

They built cities and large irrigation systems, according to Britannica.

The culture was dominated by agriculture, although they now also became known for their beautiful textiles and pottery famous for their black ceramics and intricately crafted precious metals.

The Chimu are thought to have survived by fishing and worshiping the moon, thinking it was more powerful than the sun.

Archaeologists believe they made ritual sacrifices.

Around 1470 AD, the Inca ruler Tupac Inca Yupanqui conquered the Chimu. The Incas then adopted many of their practices, including political organization, irrigation systems, and road building.

Yupanqui’s rule was short-lived, however, as the Spanish conquered the region in AD 1534.