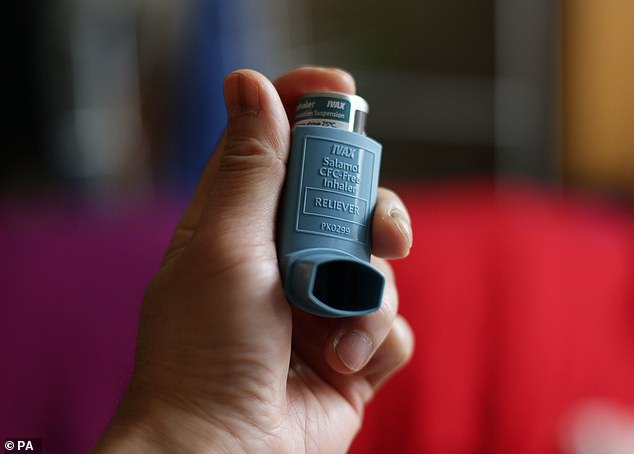 Steroids can change the structure of the brain, a new study on commonly prescribed drugs shows.

Brain scans of nearly 25,000 people revealed that patients taking glucocorticoids had less white matter — the tissue that connects parts of the brain.

Dutch academics said their “remarkable” findings may explain the links between the drugs and neurological problems.

Asthma, arthritis and eczema patients are all routinely prescribed steroids. But known side effects include anxiety, mood swings and depression.

Dutch researchers, who studied the brains of nearly 25,000 people, found that those taking glucocorticoids had differences in the white and gray matter of their brains. Those who took the drugs — as tablets, injections or inhalations — had changes in areas of the brain involved in cognition and emotional processing

Glucocorticoids are a class of steroids taken by one percent of people in the UK and US.

The drugs are classified as inhaled or systemic, the latter also including those taken in tablets or injected.

They are effective in reducing inflammation and suppressing the immune system.

But dozens of studies have linked glucocorticoids to serious side effects, such as high blood pressure, diabetes and weakened bones.

Previous research also suggested that the drugs cause structural changes and shrink certain parts of the brain. But it involved only small numbers of people.

Although it has never been proven, it is widely believed that steroids themselves are behind the crippling symptoms.

The new study, published in the BMJ Opendoes not definitively prove that the drugs are to blame.

However, the evidence from experts at Leiden University offers a possible mechanism that could explain the side effects.

Professor Onno Meijer and colleagues said it is “probable” that glucocorticoids cause changes in the brain.

More research is needed to confirm the results, as the exact implications of the changes remain a mystery.

But they argued that the findings may in part underlie the neuropsychiatric side effects seen in patients taking glucocorticoids.

One in 200 people in rich countries take glucocorticoids, rising to one in 100 in the UK and US.

The drugs are classified as inhaled or systemic, the latter comprising tablets or injections.

They work by suppressing the immune system, which becomes overactive and causes conditions such as arthritis, asthma and eczema.

Researchers examined data from 24,885 people included in the UK Biobank.

The database contains health data from half a million Britons, who have undergone dozens of scans and questioned about their lifestyle.

None of them had been diagnosed with neurological disorders or were taking mood-altering drugs, such as antidepressants.

Steroid users had ‘less intact’ white matter compared to participants who did not take the drugs.

Taking glucocorticoids for a long time and having the drugs in tablets or injection form, rather than inhaled versions, was associated with the largest drop in white matter.

Systemic users had a greater caudate, compared to those not taking the drug.

Meanwhile, those taking inhaled steroids had a smaller amygdala.

Both the caudate and the amygdala are involved in cognitive and emotional processing.

Those who used systemic steroids also performed worse on a test measuring their processing speed than non-users.

And they had more depression, restlessness and fatigue than non-users.

The team noted that participants were only asked a few questions about their mood and that lower levels of happiness may have been due to their medical condition, rather than the drugs prescribed to treat it.