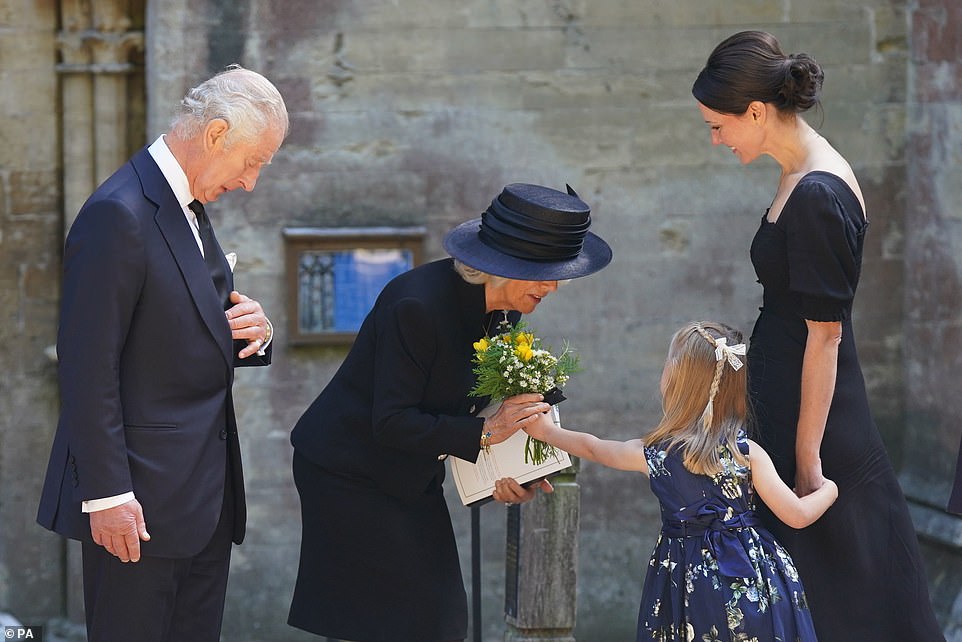 A schoolgirl who was anxious to meet the new monarch gleefully gave Queen Consort Camilla a bunch of daffodils – before surprising her with a handshake.

Five-year-old Keira Hillebert, whose parents are from Atlanta, Georgia, met the King and Queen at Llandaff Cathedral in Cardiff, where the royal couple attended a Service of Prayer and Reflection for the Life of The Queen.

Camilla received the posy from the schoolgirl then reached out to shake her mother’s hand. But the little girl, who was looking on, didn’t want to miss out on her big chance and decided she wanted a handshake from the Queen Consort, too.

She reached out her hand to touch Camilla’s, as if trying to pull it away from the bouquet. Realising what the little girl was hoping for, the Queen Consort quickly put the flowers into her other hand and obliged with a handshake.

The sweet interaction, which was captured by waiting news cameras, prompted giggles from the girl’s mother.

The little girl was waiting outside Llandaff Cathedral to meet the King and the Queen Consort with a beautiful posy of flowers. She presented the blooms to Camilla while keeping hold of her mother’s hand 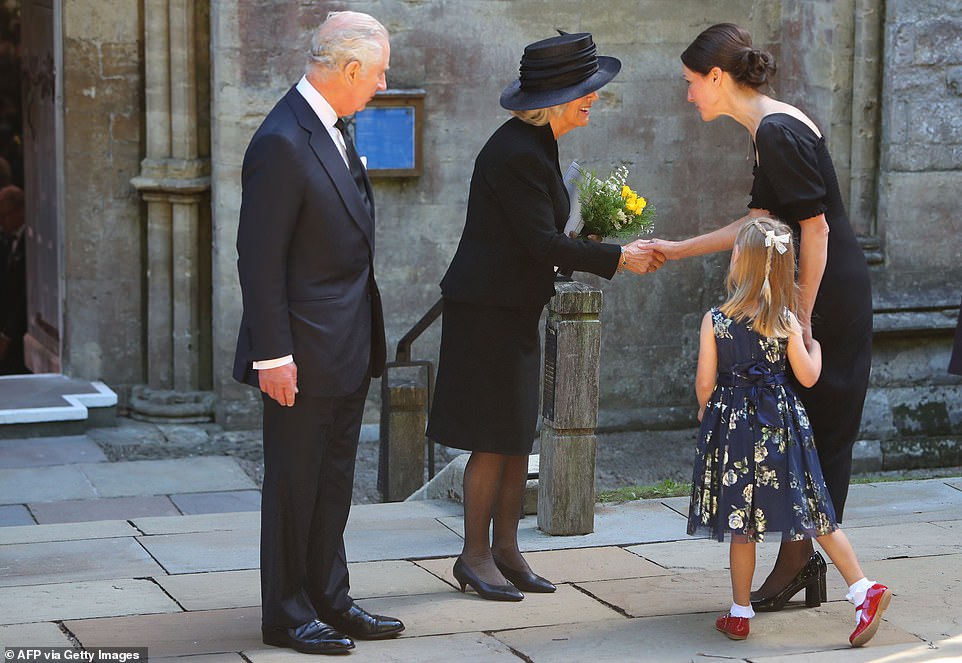 The Queen Consort turned to shake hands with the girl’s mother, as King Charles looked on. But the little girl didn’t want to miss out on her moment… 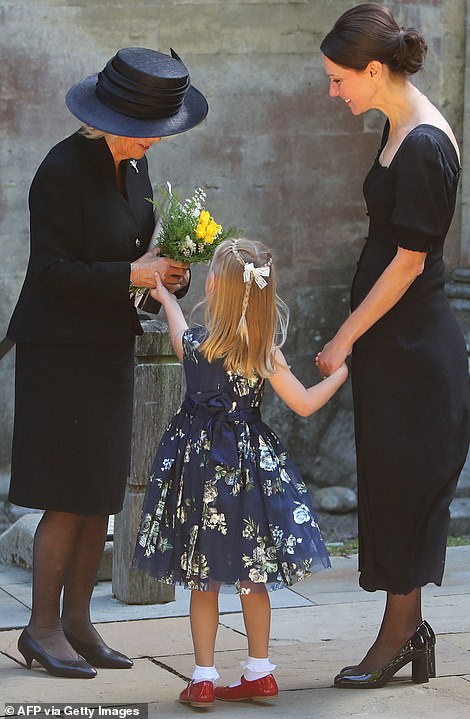 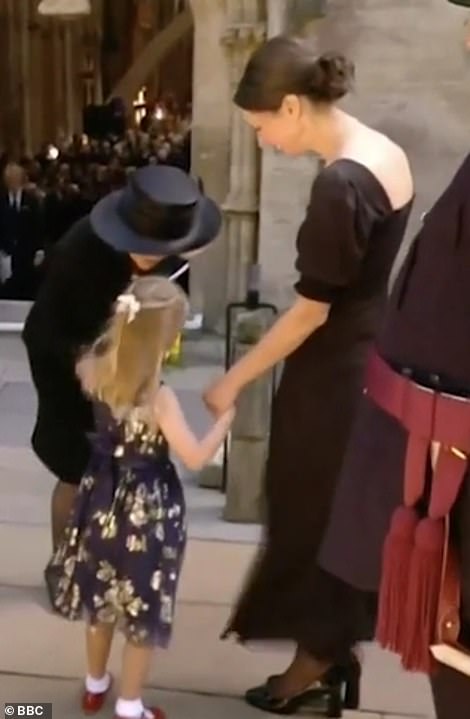 … so she reached out for Camilla’s hand, pulling it away from the flowers so she could shake it (left). The Queen Consort happily obliged and shook the girl’s hand, much to her delight (right) 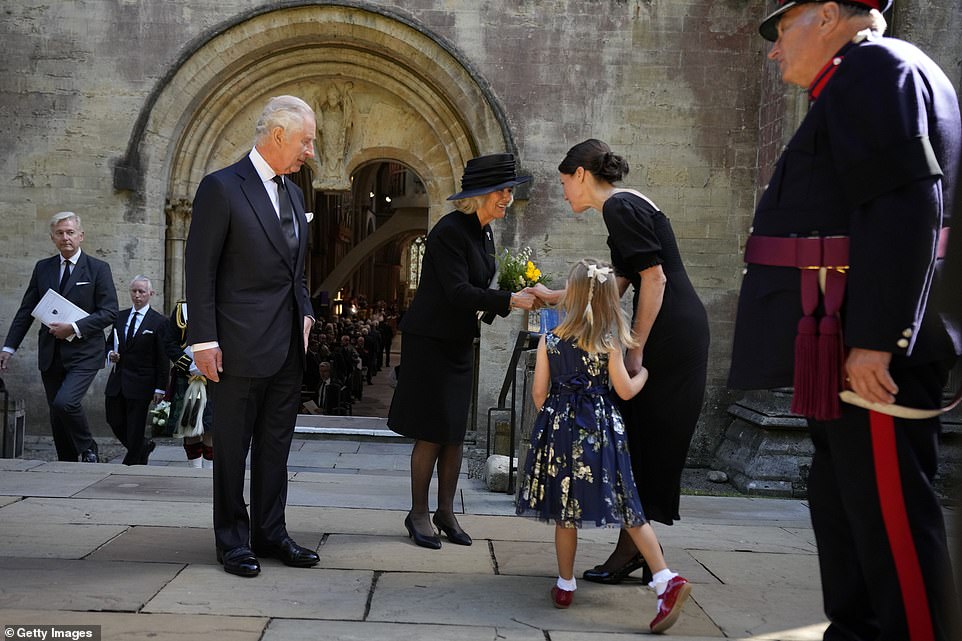 The sweet exchange took place outside Llandaff Cathedral, following a Service of Prayer and Reflection for the Life of The Queen

King Charles, who has five young grandchildren of his own, appeared to see the funny side and laughed with the girl’s mother and Camilla as she ran between the royals.

Keira recently got her British citizenship and received her British passport on the day the Queen died.

‘She then ran off, saying she was cold. They were so lovely and sweet with her and Camilla asked if she had been practising her curtsy because she did it so well.’

The King and the Queen Consort have spoken to countless well-wishers and mourners who have turned out to pay their respects since the death of the Queen last week.

They have been met by crowds in Edinburgh, London, Belfast, and now in Cardiff, as they tour the UK ahead of Her Majesty’s funeral on Monday.

The King and the Queen Consort were greeted by thousands of well-wishers as they arrived in Cardiff for their first visit to Wales since the death of the Queen.

They were driven through the streets of the capital to Llandaff Cathedral, having landed nearby in a helicopter.

As the new King set foot on Welsh soil, a gun salute was fired by reservists from 104 Regiment Royal Artillery at Cardiff Castle several miles away. 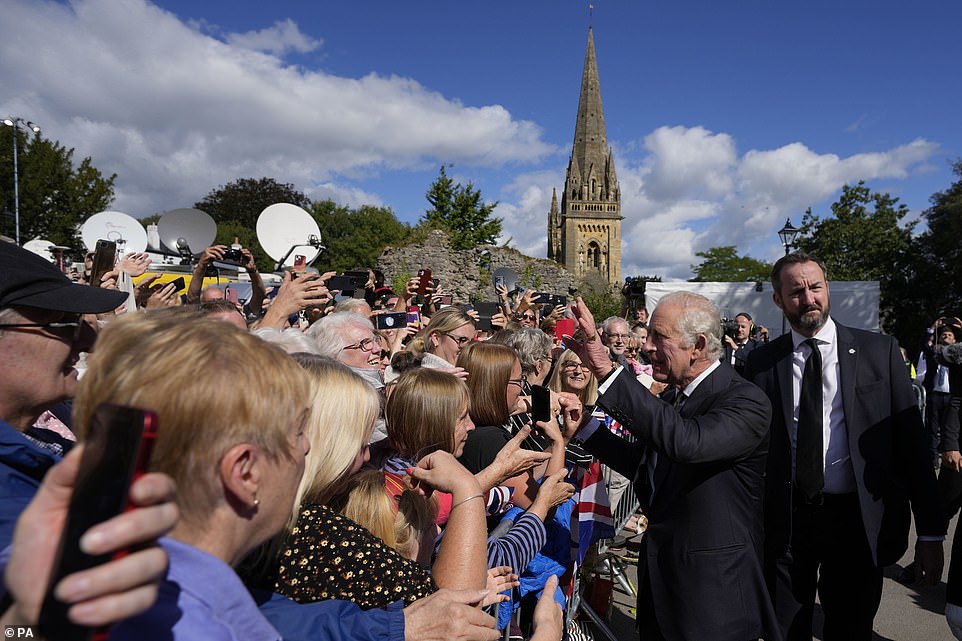 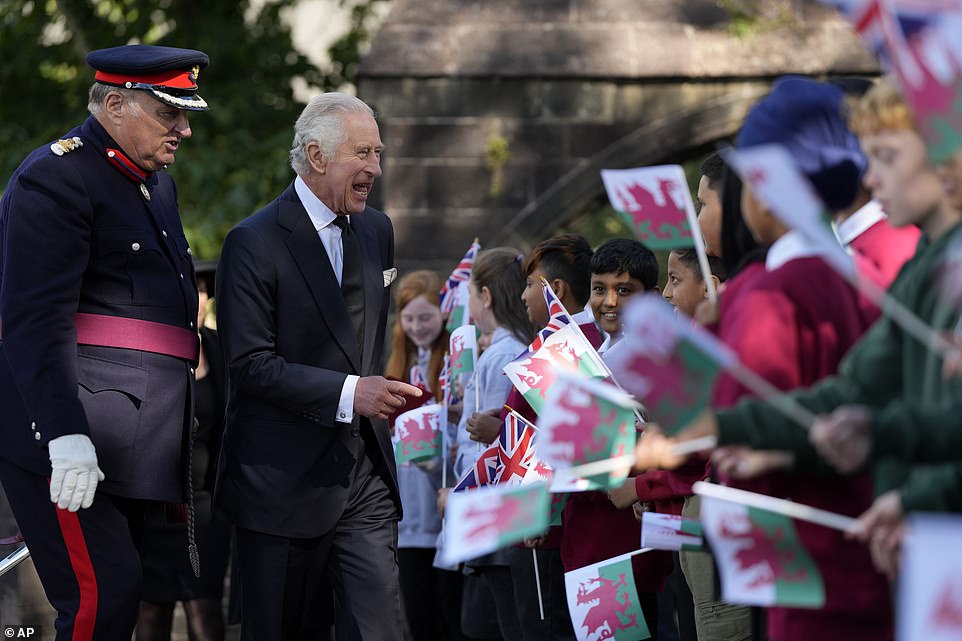 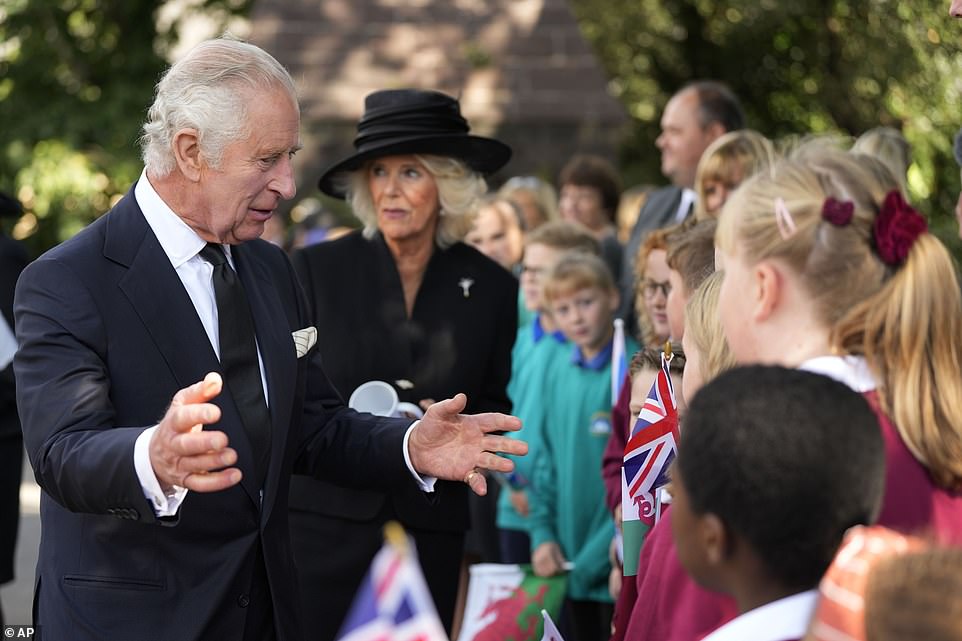 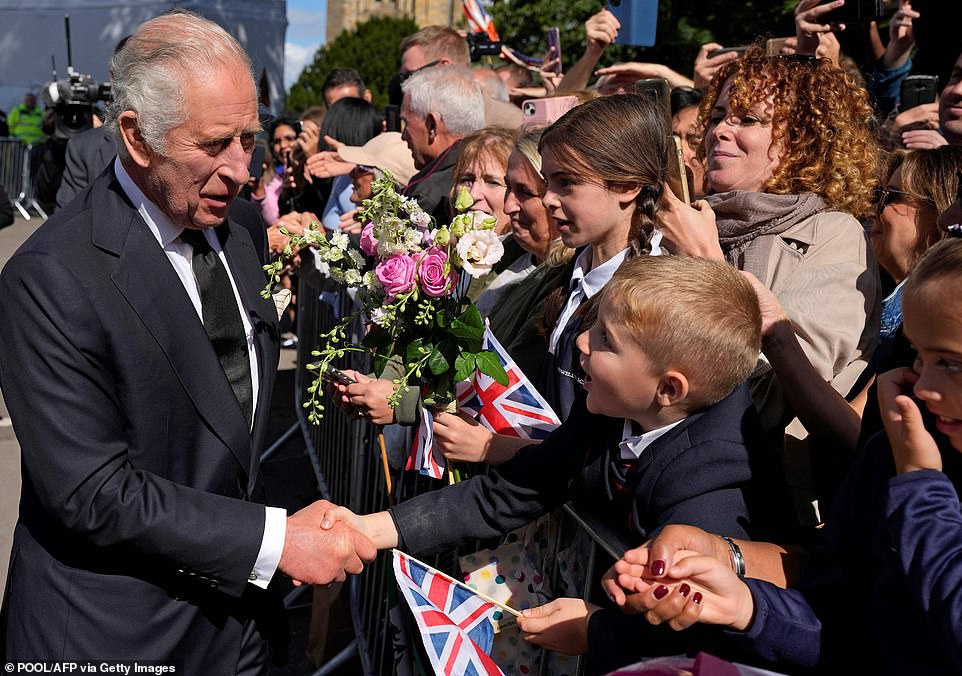 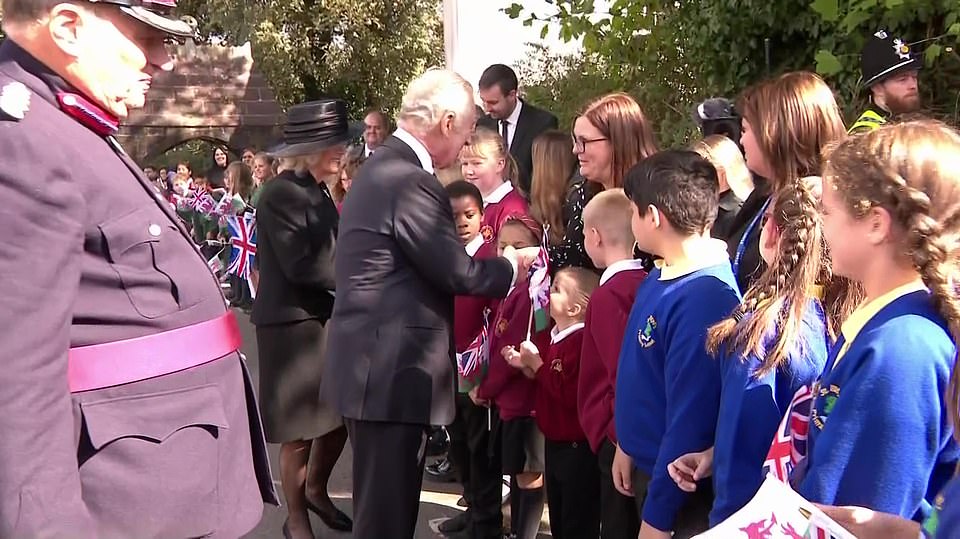 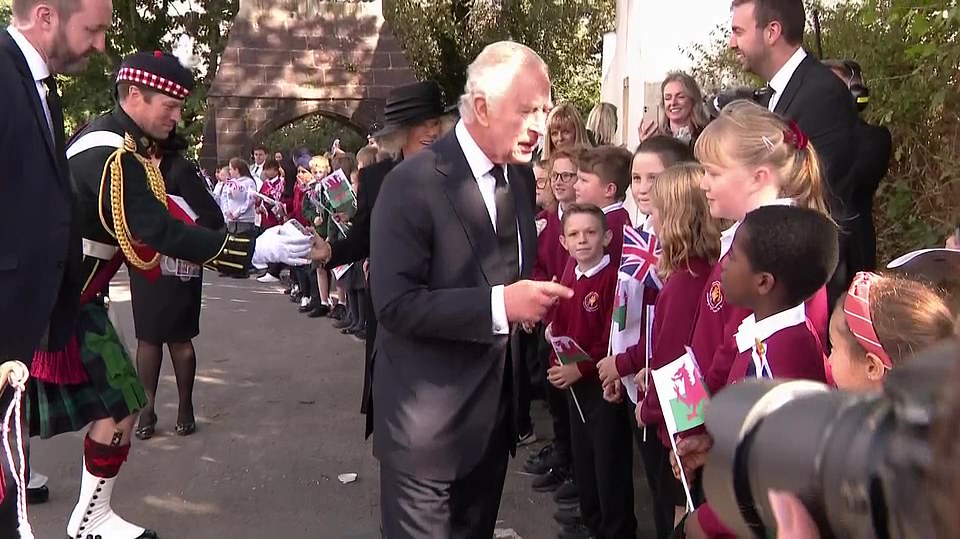 Charles and Camilla were met at the landing site by the Lord Lieutenant of South Glamorgan, Morfudd Meredith.

When they arrived at the cathedral by car, they were greeted Vice Lord Lieutenant Sir Brooke Boothby, whose wife, Lady Boothby, is close friends with Camilla.

The King was wearing a black morning suit and the Queen Consort a black skirt, suit jacket and hat. Camilla also wore a silver leek brooch, a symbol of Wales, which was a gift from the Queen.

Camilla commented to Mr Drakeford that they had ‘brought the sun’ with them, adding that it ‘might be the last day of sunshine for a while’.

The First Minister replied: ‘We ought to enjoy it then.’ 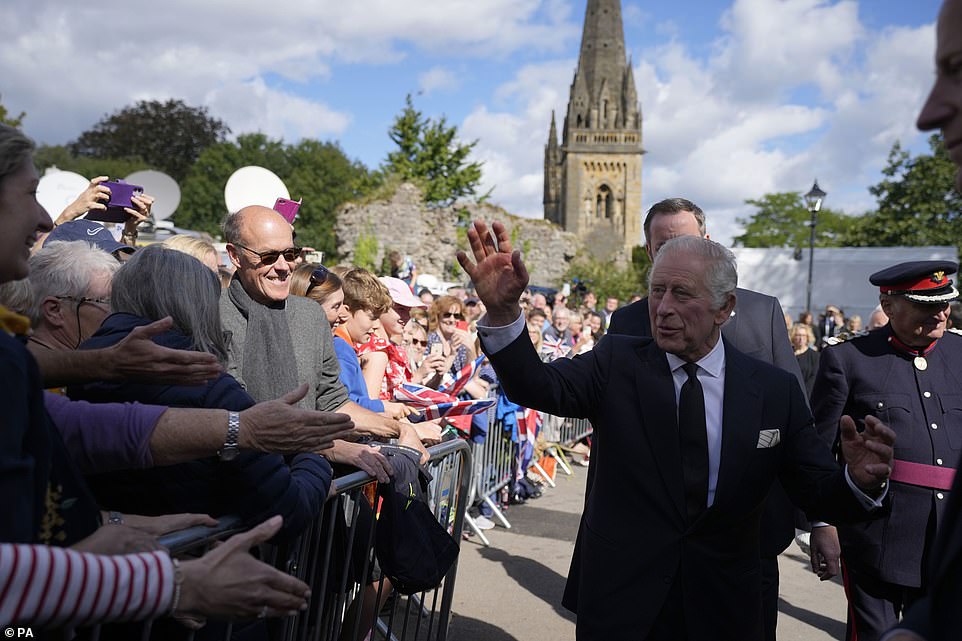 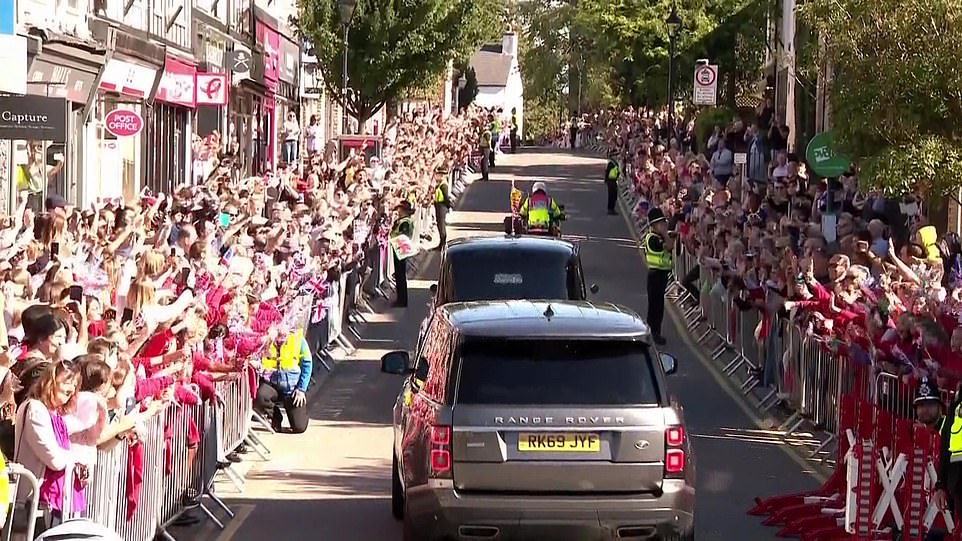 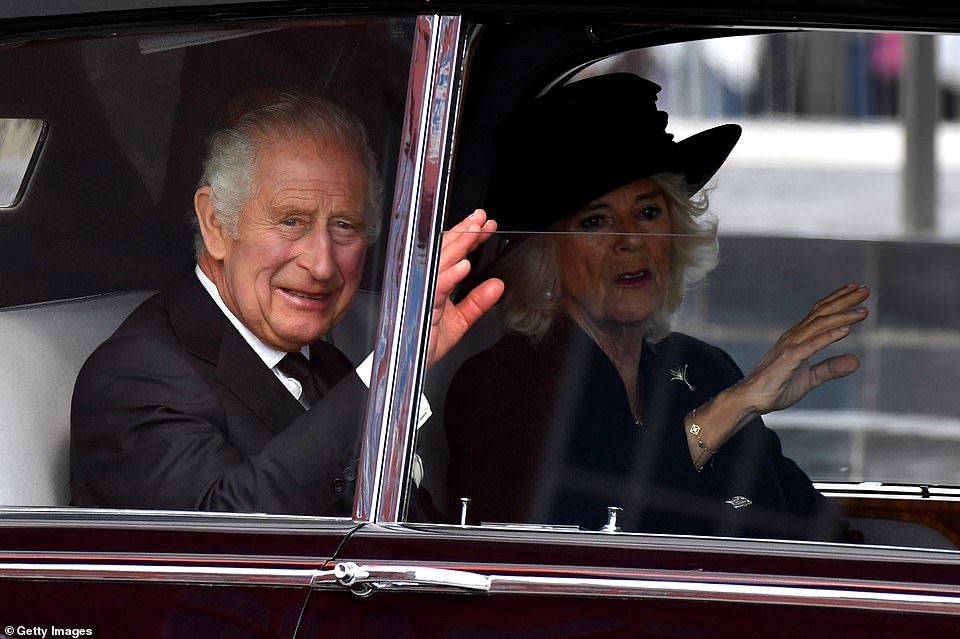 King Charles III and Camilla, Queen Consort waved as they arrived to receive a Motion of Condolence at the Senedd in Cardiff today

Guided inside the packed cathedral by the Dean of Llandaff, Michael Komor, and Archbishop of Wales Andy John, the King and Queen Consort were led in procession down the aisle by the chaplain to a fanfare before the congregation sang a hymn.

A service of prayer and reflection for the life of Queen Elizabeth II then got under way, including the singing of psalms by Llandaff Cathedral Choir and a reading in Welsh and English by Mr Drakeford, taken from the First Book of Kings.

In his address, the Archbishop said the Queen has ‘graced the life of Wales with love, dignity and courage’.

He added that she was a ‘monarch who could surprise and delight us’, with the ability to bring people together in difficult circumstances, such as her visit to the site of the 1966 Aberfan disaster, where 144 people lost their lives when a coal tip collapsed on a primary school. 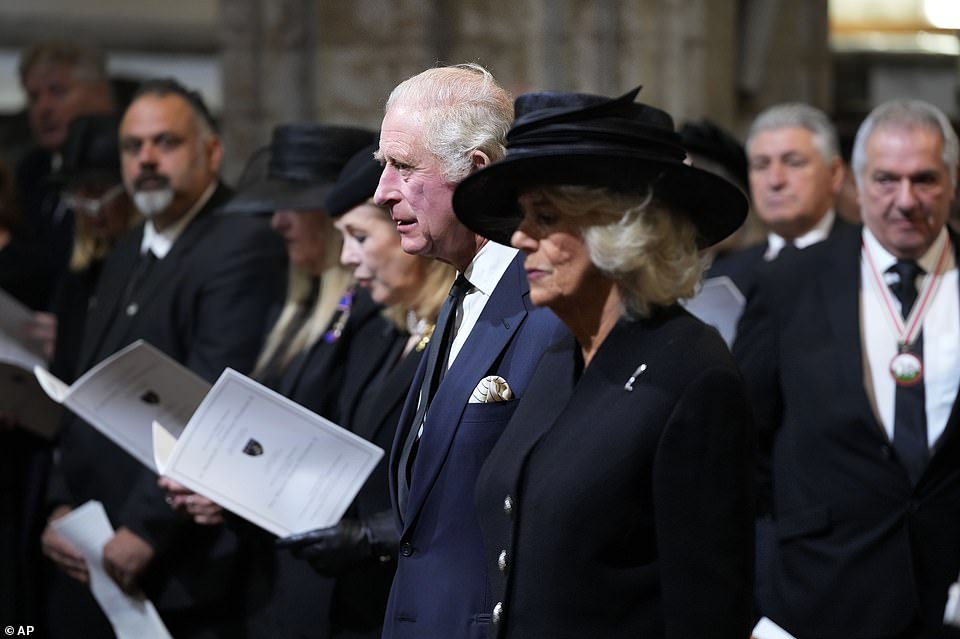 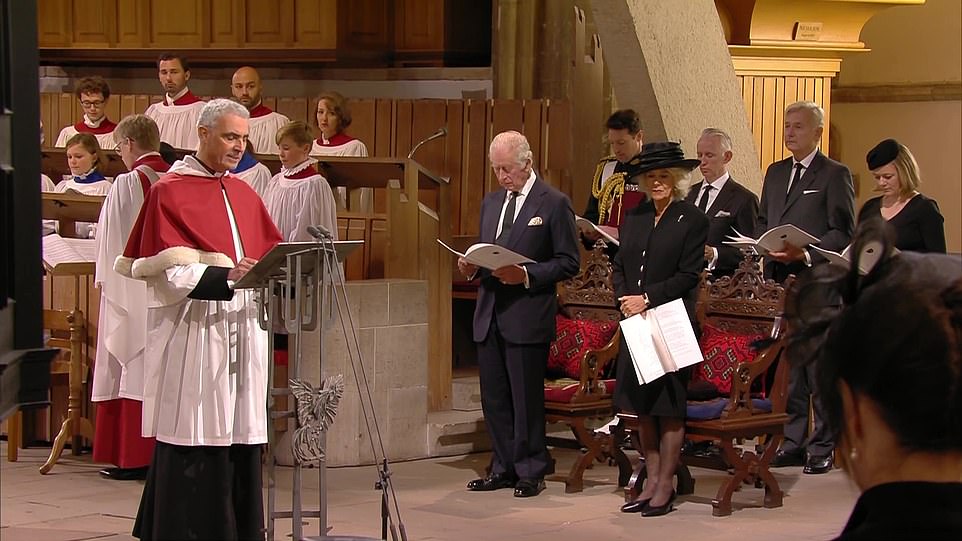 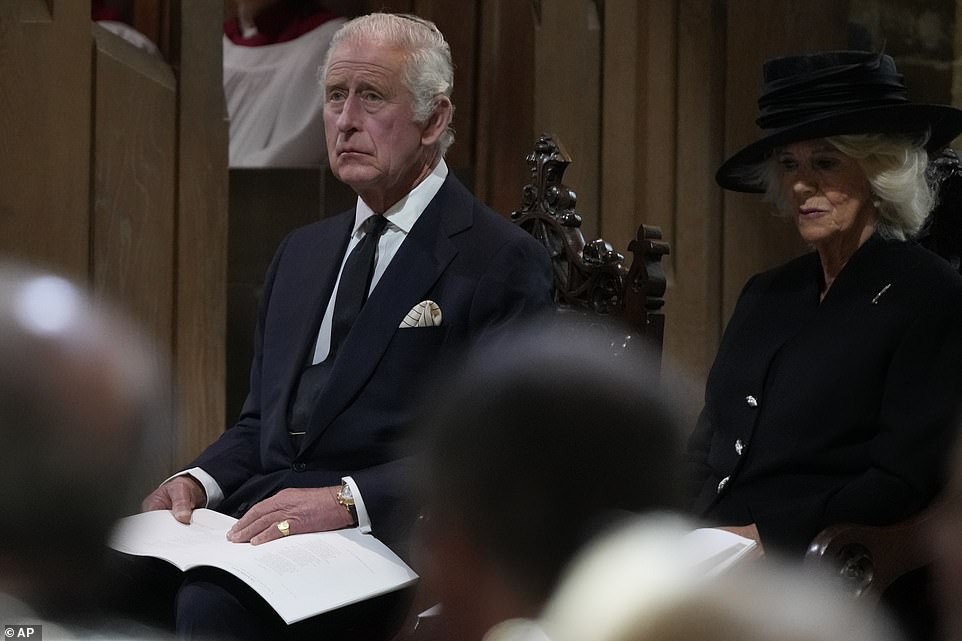 Prayers recorded by a number of faith leaders including John Minkes, from the South Wales Jewish Representative Council, Dr Abdul-Azim Ahmed, from the Muslim Council of Wales, and Bishop of Llandaff June Osborne were then played.

Music was played by Royal Harpist Alis Huws and Catrin Finch, the first ever harpist chosen by the then-Prince of Wales.

Ending the service, the Welsh national anthem, Hen Wlad Fy Nhadau, was sung, followed by a trumpet fanfare and a rendition of God Save The King. Before leaving, Charles and Camilla signed the cathedral’s visitors’ book.

The royal couple were then greeted by more than 40 pupils from five primary schools around Cardiff.

Dexter Garland and Ella Noble, both 10, from St Julian’s Primary School in Newport, handed Charles and Camilla a mug each with their own artwork printed on them.

The school opened in the year Queen Elizabeth’s reign began 70 years ago.

Ella said: ‘The Queen said she appreciated it and would make sure to have a cup of tea in it. It is something I will remember for the rest of my life. It was the best experience of my life.’

Charles and Camilla then went on a walk around the Cathedral Green to meet members of the local community and were greeted by loud cheers, and cries of ‘God Save The King’.

They were handed gifts and flowers, and many people thanked them.

Some people had gathered early in the morning to get a glimpse of the royal visitors, with the first arriving at around 3.30am.

The King and Queen Consort then headed to the Senedd, before processing through the city to Cardiff Castle.

Before departing the Senedd, the King and Queen Consort met members of the Senedd in the Neuadd.

King Charles III made a speech in Welsh, giving his response to the messages of condolence to his late mother Queen Elizabeth II, expressing how ‘deeply grateful’ he was.

On leaving, pupils from Ysgol Gymraeg Hamadryad in Butetown, Cardiff met the couple and Osian Powell, 11, presented Camilla with a posy.

The royal couple then did a walkabout outside meeting wellwishers.

There was a small amount of booing from a few protestors but this was quickly drowned out by people singing God Save The King.

It is the first time Charles has returned to the country as monarch, after serving for 64 years as the Prince of Wales, a title bestowed on him by his mother when he was nine years old.

Wales is the last destination on the tour of nations which the couple embarked on after Charles was proclaimed King, travelling more than 1,500 miles around the UK in his first week on the throne.

The royal visit is being televised for people wishing to stay at home.

The Queen: All you need to know following her passing and a look back at her 70-year reign