Anniversary holiday train fight: Ten screaming youths ‘terrorize passengers’ and assault a woman in an ugly showdown on journey from Brighton to Cambridge

This is the shocking moment when ten screaming youths fight in an ugly confrontation with other passengers on a train from Brighton to Cambridge.

The footage begins with a short blond woman being pulled away from the crowd of young men as they punch her.

A man can be seen assaulting the woman as she yelled that her children were on the train.

One member of the crowd then tries to calm the situation before another yells, “You’re not doing anything” while being held back from the woman and man he was arguing with. 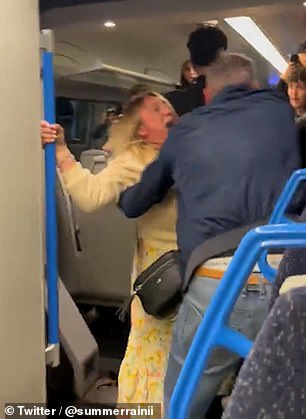 The person who posted the images on Twitter accuses the group of youths of yelling “abuse” at each passenger before being challenged, sparking the brawl.

She wrote: If anyone knows who one of these kids is on the train from Brighton to Cambridge at 10:12 PM, please let me know and yell at each person until someone decides to challenge them.

“They got off at Three Bridges.”