Thalidomide could save the lives of patients battling a rare blood vessel disease, study suggests.

The infamous drug killed and injured up to 100,000 babies in the 1950s and severely disabled thousands, damaging their limbs, ears and eyes.

But it offers a “breakthrough” in the treatment of severe arteriovenous malformations (AVMs) — abnormal knots of blood vessels, scientists now say.

The condition, which can occur anywhere in the body, can be excruciating, causing bleeding and even causing strokes.

Current treatment options include surgery to remove the tangled blood vessels and injections that stop blood from flowing through them.

Thalidomide was hailed as a “miracle cure” for morning sickness after it was created in the 1950s by the German pharmaceutical giant Gruenenthal Group. But it was blamed for the deaths of 100,000 babies, leaving 10,000 severely disabled — such as with missing or deformed limbs — by the time it was withdrawn in 1961.

HOW THE THALIDOMIDE SCANDAL DISCOVERED

1953: Medicine made in Germany by the Gruenenthal Group

1958: Thalidomide is approved for use in the UK for the first time

1961: Australian doctor William McBride reports an increase in deformed babies born in his hospital to mothers who had taken thalidomide. The drug will be discontinued later that year

2008: The drug is approved for the treatment of multiple myeloma – bone marrow cancer – by the European Medicines Agency

2009: UK government agrees £20m grant, to be paid to the Thalidomide Trust over three years

Thalidomide was hailed as a “miracle cure” for morning sickness when it was developed by the German pharmaceutical giant Gruenenthal Group in the 1950s.

But it was soon withdrawn after a doctor in Australia reported a link between the drug and birth defects, such as deformed hands, facial deformity and brain damage.

Charities blame the drug for the deaths of up to 100,000 babies worldwide, saying it left 10,000 severely disabled — such as with missing or deformed limbs.

Experiments later revealed that it caused birth defects by stopping the formation of blood vessels in babies.

The same mechanism is why it works in treating AVM, according to the Belgian researchers who made the discovery.

The results showed that pain decreased in all participants, their bleeding stopped and ulcers healed.

Study author Professor Miikka Vikkula said: ‘The results are convincing, and we hope they will be confirmed by larger trials.

‘We hypothesized that thalidomide would work in these patients, so our results didn’t come as a surprise.

“But it was great to get clinical confirmation that we were right.

Professor Vikkula, from the de Duve Institute, added: ‘In our view, this is a groundbreaking finding.’

About 14 people per million suffer from AVM, which can be caused by an error in blood vessel formation in early pregnancy.

If the tangled blood vessels are near the skin, the condition can cause blue, purple, or red discoloration and swelling. The skin may also be sensitive and prone to developing sores.

The hearts of AVM patients have to work harder to keep up with the extra blood flow, which can lead to heart problems.

People with small AVMs don’t need treatment, but others may need surgery to remove the tangles.

Other treatment options include embolization — an injection that destroys blood vessels. However, it is not always effective.

Although most AVM patients live relatively normal lives, there is a risk that the abnormal tangles could burst and cause a stroke.

The complication affects 1 percent of patients every year.

Previous research by the Belgian team found that AVM is caused by mutations in cells in the walls of blood vessels, which encourage abnormal formations.

Professor Vikkula said the discovery “made us wonder about the possibility of using thalidomide to inhibit their creation.” 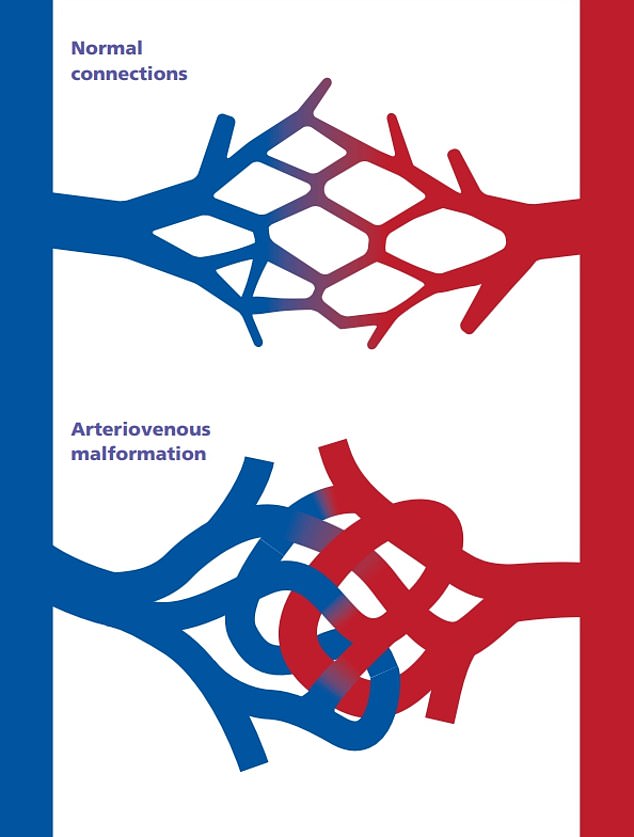 About 14 people per million suffer from AVM, which can be caused by an error in blood vessel formation in early pregnancy. If the tangled blood vessels are near the skin, the condition can cause blue, purple, or red discoloration and swelling. The skin may also be sensitive and prone to developing sores. The hearts of AVM patients have to work harder to keep up with the extra blood flow, which can lead to heart problems. People with small AVMs don’t need treatment, but others may need surgery to remove the tangles

AVM patients have high levels of the protein, which is thought to promote tangles in their arteries.

Eighteen patients, ages 19 to 70, were involved in the study, which will be presented at a medical conference this week.

Participants took 50 mg, 100 mg or 200 mg of thalidomide per day between two months and four years.

They were all monitored for four and a half years after they stopped taking the drug.

Patients also agreed to use birth control for at least one month before the start of the study and for four weeks after the end of the study, requiring men to promise to wear condoms during sex.

The results, already published in the journal Nature cardiovascular researchshows that all patients experienced rapid pain relief, their bleeding stopped and ulcers healed.

Patients with heart failure recovered, and one “appeared to be completely cured,” the researchers said.

The team also found that when patients took thalidomide and underwent embolization with injection treatment, their dosage could be reduced from 100 mg or 200 mg to 50 mg.

Decreasing the dosage reduced side effects, such as fatigue and numb limbs.

Eight patients also had stable AVMs five and a half years after the study.

The researchers noted that the cost of treating AVM patients with thalidomide is up to 12 times cheaper than other drugs being tested for the condition.

The research will be presented on Sunday at the annual conference of the European Society for Human Genetics in Vienna.

Professor Alexandre Reymond, chair of the conference, said: ‘This study demonstrates not only the health and economic benefits of repurposing drugs – even the most reviled – but also how genetic research can lead to real breakthroughs in therapies for difficult-to-use drugs. treat distressing conditions .’

Despite being taken for morning sickness in 1961, thalidomide is still used to this day. However, there are strict rules for women of childbearing age taking the drug.

It is given to patients with myeloma, a cancer that starts in the bone marrow, and to treat Hansen’s disease (also known as leprosy), an infection caused by slow-growing bacteria.

Passengers on £4,000 cruise are furious as their free replacement holiday has been CANCELLED

How do you prevent mold from appearing in your home?