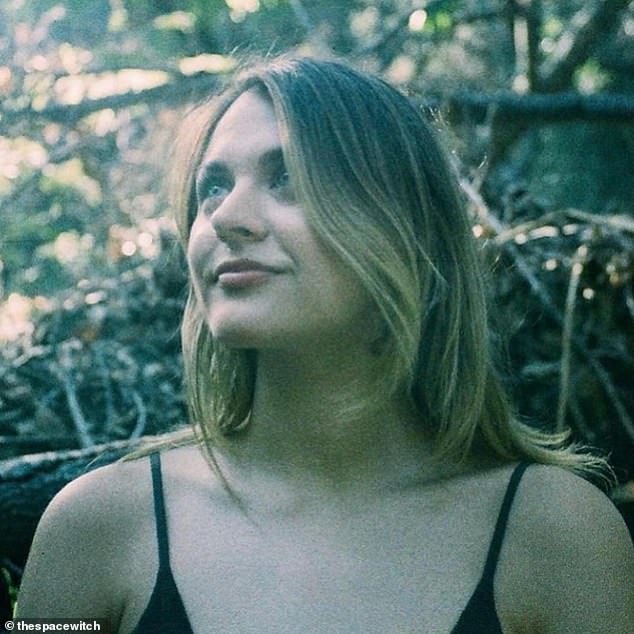 Frances Bean Cobain tells of a near-death experience that changed her outlook on life as she celebrated her 30th birthday.

The visual artist, the only child of the late Nirvana frontman Kurt Cobain and Hole singer Courtney Love, took Instagram on August 18 – her birthday – to reflect on how she’s grown over the past decade.

“At that time, an intrinsic sense of deep self-loathing dictated by insecurity, destructive coping mechanisms, and more trauma than my body or brain knew how to deal with, indicated how I saw myself and the world; through a lens of resentment for being brought into a life that seemingly attracted so much chaos and the kind of pain associated with grief that felt inescapable.” 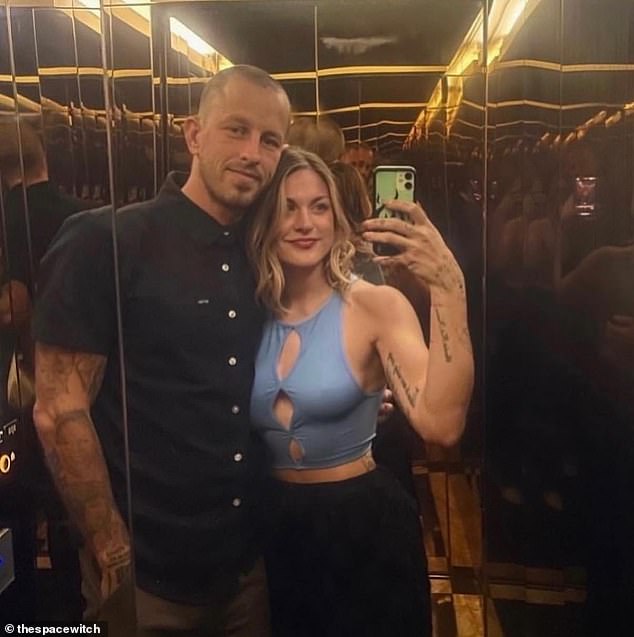 The visual artist shared photos of herself, her loved ones and her art, including a snapshot of herself with her boyfriend, professional skateboarder Riley Hawk (pictured) 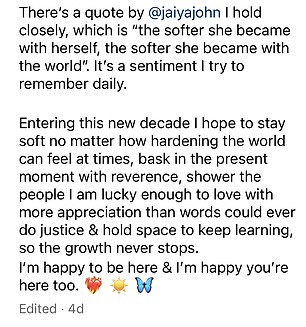 Frances reflected on how she’s grown over the past decade, saying her 20-year-old self was ‘not sure’ if she’d make it to 30

She continued: “An event on an airplane that brought me closer to death is ironically the event that prompted me to run to this lived experience with radical gratitude. I’m glad I proved myself wrong and found ways to turn pain into knowledge.”

“It’s a feeling I try to remember on a daily basis,” she explained. “As I enter this new decade, I hope to remain soft, no matter how harsh the world may feel at times, cherish me in the present moment with reverence, shower the people I am fortunate enough with with more appreciation than words can ever do justice & keep room to keep learning so growth never stops. I’m glad I’m here and I’m glad you’re here.” 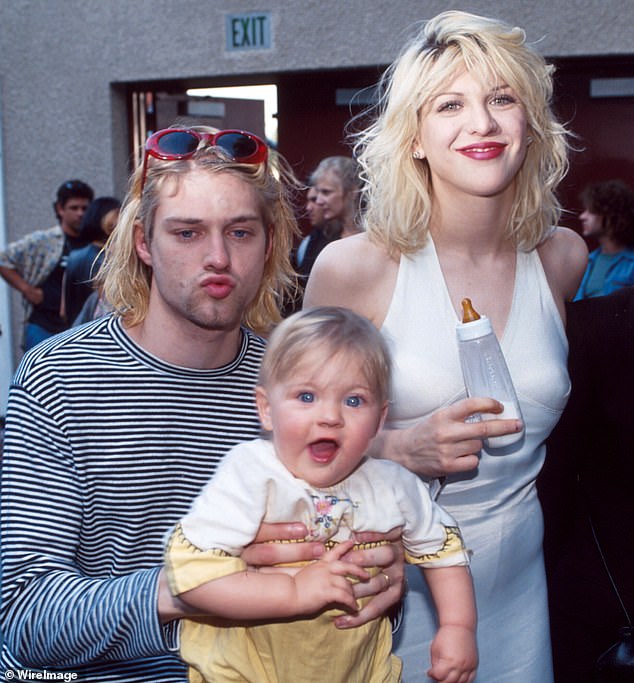 Frances is the only child of Hole singer Courtney Love and Nirvana frontman Kurt Cobain, who died by suicide in 1994. 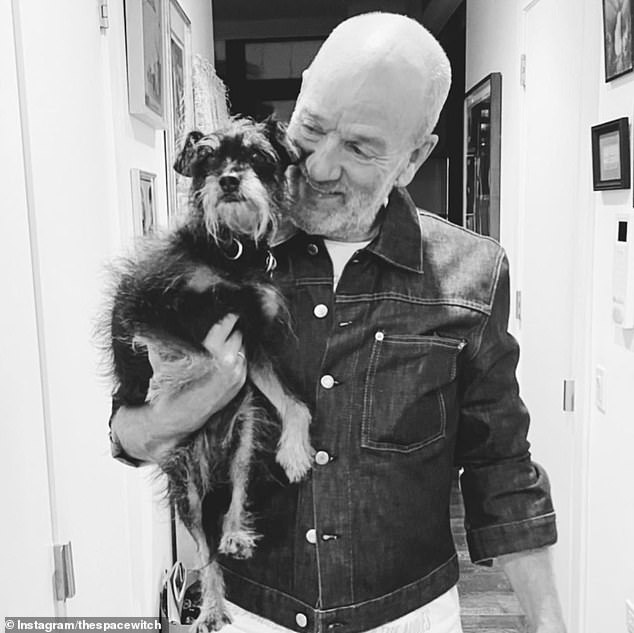 Frances’ post featured a black and white photo of her godfather, former REM frontman Michael Stipe, with a small dog 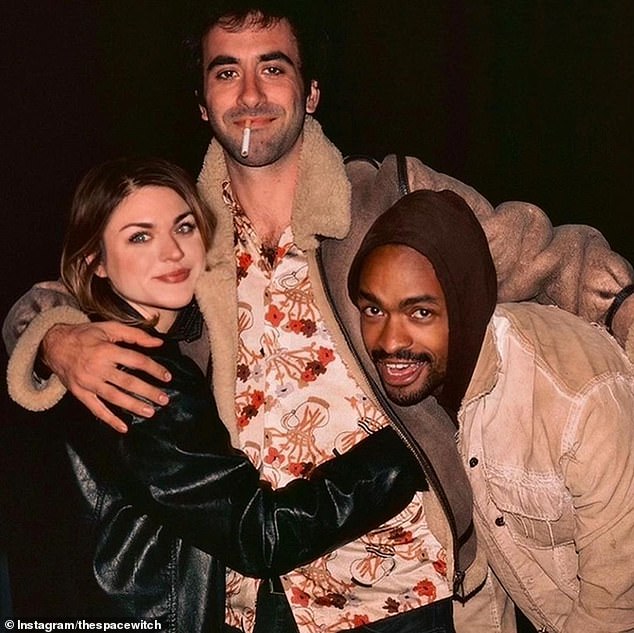 Her post featured photos of herself, her loved ones, and her art, including a snapshot of herself with her boyfriend, professional skateboarder Riley Hawk. 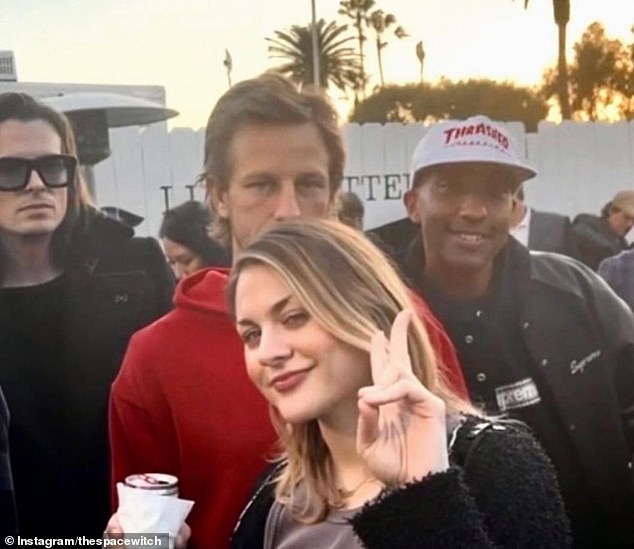 “I’m glad I proved myself wrong and found ways to turn pain into knowledge,” Frances wrote (pictured with friends) 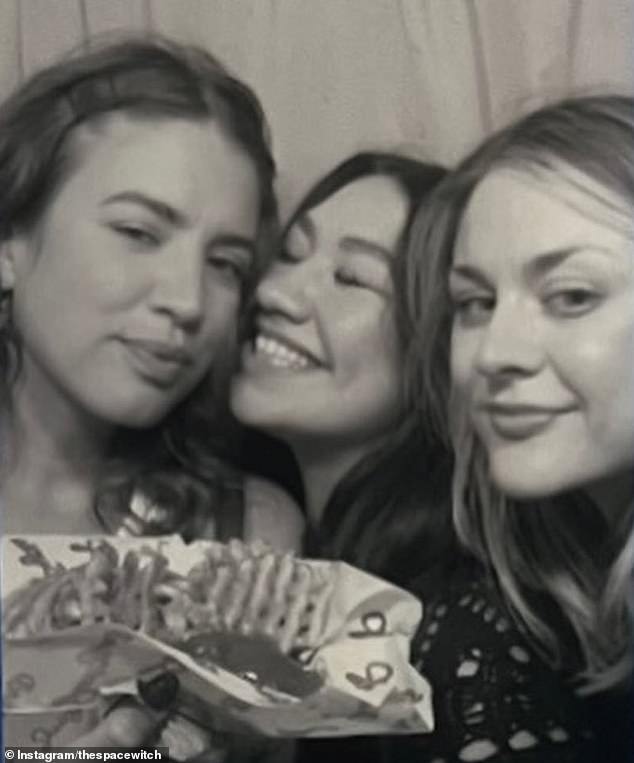 “It’s a feeling I try to remember on a daily basis,” she explained. “As I go into this new decade, I hope to stay soft, no matter how hard the world can feel at times…”

Frances’ father, Kurt, struggled with substance abuse and mental health issues throughout his life. He died by suicide at his home in Seattle at the age of 27 in April 1994. Frances was just two years old at the time.

Her mother, Courtney, was married to Kurt from 1992 until his death. Frances inherited 37 percent of her late father’s estate in December 2009.

In 2019, she revealed that she feels “guilt” about inheriting the money, which is said to be over $95,000 a month, because she “didn’t deserve it.” People reported.

“It’s almost like this big, giant loan that I’ll never get rid of,” she explained on an episode of the RuPaul: What’s the tee? podcasting. 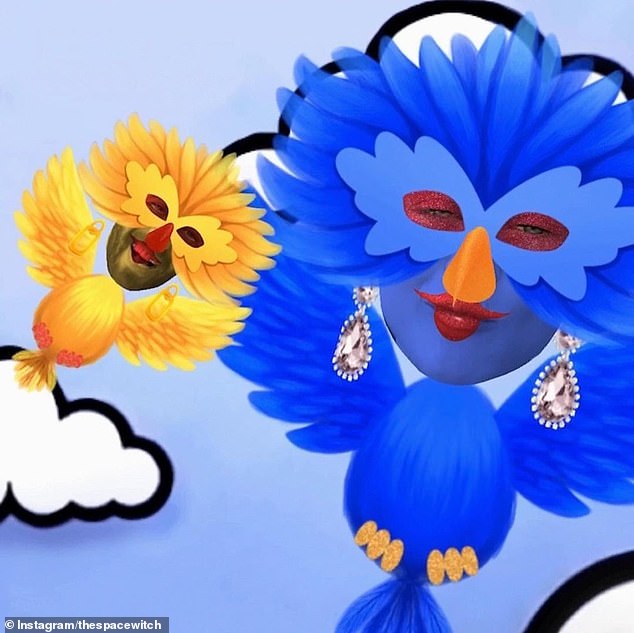 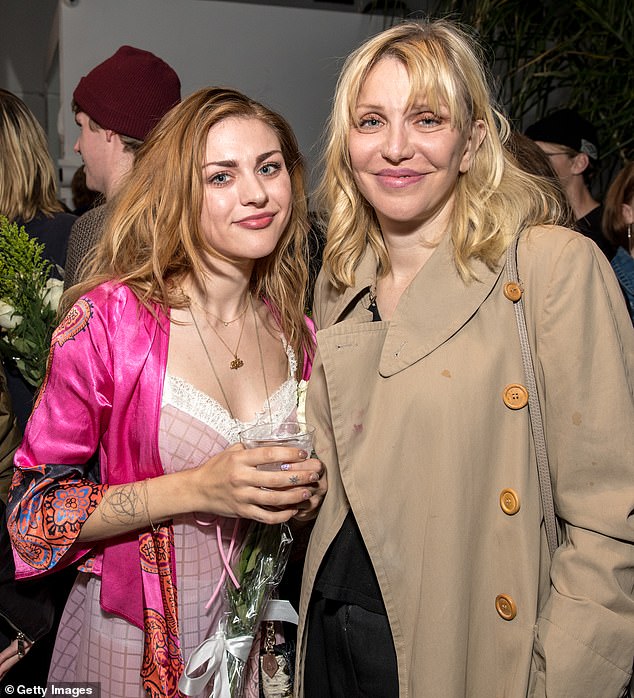 “I have an almost foreign relationship with it or guilt because it feels like money from someone I’ve never met, let alone earned myself.”

Nirvana burst out of the underground and mainstream music scene in 1991 with the release of their groundbreaking album Nevermind, which features their powerful lead single Smells Like Teen Spirit.

Over the next three years, the Seattle-based rockers became one of the biggest bands in the world, selling more than 75 million records worldwide.

Ultimately, Nirvana was inducted into the Rock And Roll Hall Of Fame in their first year of eligibility in 2014.

Frances has shared less than a handful of Instagram posts in the past year after a one-year hiatus from the platform in 2021. A few months ago, Frances revealed on Instagram Stories how she’s spending Father’s Day after she lost her dad when she was just a toddler

In June, she revealed on Instagram Stories how she’s spending Father’s Day after losing her father when she was just a toddler, describing how she channels her emotions into a creative project.

“Today can be complicated for many people,” she wrote. “So I thought I’d share my annual tradition for this day.

“I try to use all the energy I feel (sometimes sad, sometimes deeply hurt or lost, but in recent years curious and compassionate) to bring something into the world that didn’t exist before, through a kind of creative outlet.

“I like to believe that if something beautiful can coexist with something sad or complicated, then there is room for those emotions to circulate with intention and meaning.

“I’m sending whatever needs to be sent your way today,” she concluded, including three emojis with hearts and blue butterflies.