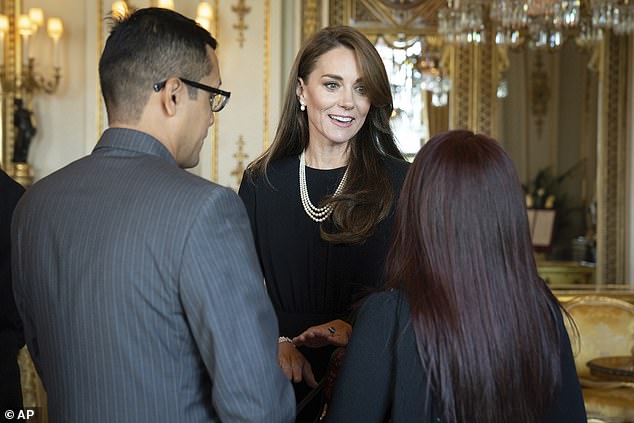 The Princess of Wales has made a heartbreaking confession to the Australian Governor-General after the couple met with other dignitaries for the Queen’s funeral.

Kate spoke to David Hurley at Buckingham Palace on Saturday about how her three children Prince George, nine, Princess Charlotte, seven, and Prince Louis, four, coped with the sudden loss of their great-grandmother.

Queen Elizabeth II died on September 8 at the age of 96 in Balmoral, her beloved castle in Scotland. Her funeral is scheduled for September 19.

Mr Hurley recalled his conversation with Kate and how her eldest son Prince George ‘has now kind of realized how important his great-grandmother was and what’s going on’.

Kate spoke to David Hurley at Buckingham Palace on Saturday about how her three children Prince George, nine, Princess Charlotte, seven, and Prince Louis, four, coped with the sudden loss of their great-grandmother

But four-year-old Louis wondered if the family’s summer visit to Balmoral Castle will still be as he remembers it.

But four-year-old Louis wonders if the family’s summer visit to Balmoral Castle will still be as he remembers it.

“The youngster is now asking questions like, ‘Do you think we can still play these games when we go to Balmoral and things like that, because she won’t be there?’” said Mr. Hurley.

An Australian expert has revealed the best way to talk to your children about the Queen’s death, revealing that parents should “be honest” and “show their own emotion” when breaking the news.

In conversation with Daily Mail Australia, Margaret Rice, curator of Good Grief websitesaid it was “normal” for children to have “a lot of questions” about the death of the royal family and it’s best for parents to be as “simple and honest as possible” when explaining what happened. 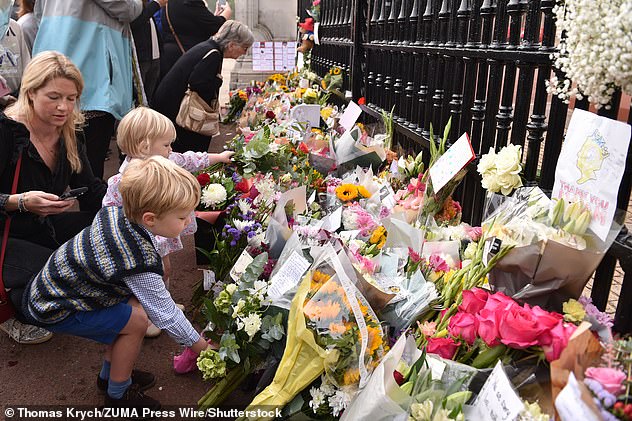 An expert has revealed the best way to talk to your kids about the Queen’s death, revealing that parents should be “honest” and “show their own emotion” when breaking the news. Pictured: A child places flowers outside Buckingham Palace in London as the world mourns Her Majesty

‘Children experience grief and loss from an early age’, she explains.

“They’re going to want to talk about it quite a bit, and they might repeat questions, you might think you’ve answered the questions about it, but it comes back in a different way, and that’s normal.

“When they’re very small, they don’t quite understand the finiteness of death, they don’t process it like adults do,” she added.

Margaret from Sydney also said it’s common for a small child to ‘ask a lot of questions’ when their own great-grandparent or grandparent dies – but that every child will behave differently. 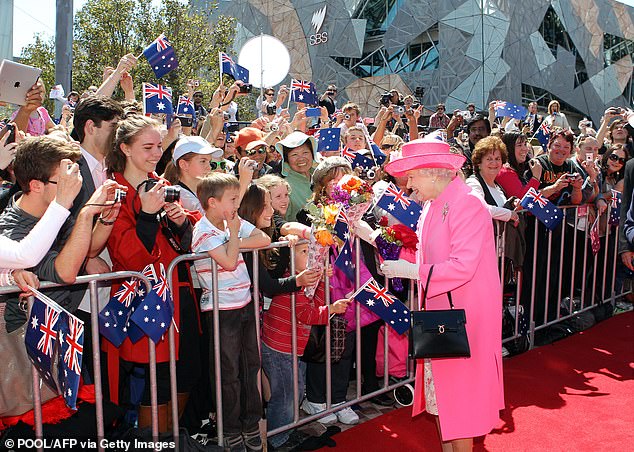 The world was plunged into mourning after Her Majesty passed away on Thursday at the age of 96, with many parents revealing that their children had been asking many questions about the historic event. Her Majesty is pictured meeting children in Melbourne in 2011

“Another child of the same age in the same family could react very differently,” she said.

“They’re all different, if your kid just wants to talk about it, meet them where they are, be patient when they ask the questions.”

She added that things will “gradually change” as children get older, but curiosity is normal at any age.

“If you’re sad about it yourself, don’t think you have to pretend you’re not sad,” she added.

“Likewise, don’t pretend to be sad when you’re not. 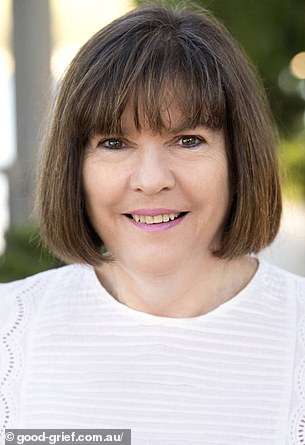 Margaret from Sydney (pictured) also said it is common for a small child to ‘ask a lot of questions’ if they are great-grandparents or grandparents, but that each child will act differently

“Many people around the world will feel like they have lost a grandmother who lives abroad.

“It’s important to be honest about your emotions with your children, regardless of the age of the child.

“The easiest way is to say ‘she died’, make sure you use the word dead and die and be direct.

Margaret added that the monarch’s death is an “important opportunity” to “introduce children to the idea of ​​death”, especially if they have not yet experienced the loss of someone in their family.

“Use very simple descriptions, say ‘the person has stopped breathing,'” she said.

‘If you are religious, you may want to bring concepts of an afterlife to your own liking. You can say that they have realigned themselves with God.

“But questions about heaven can confuse children more. Children may think that heaven is very full and have nightmares about all those corpses in heaven.’

Margaret added that if you introduce the idea of ​​heaven, you still have to explain what death is “in a technical sense.”

“You don’t have to worry about it and make it ugly. You can draw parallels with the death of pets.

“Our understanding of what children understand with things like death is constantly changing, but in general, the smaller they are, the less they can understand.”

“When they’re young, you can use picture books and storybooks to explain it.”

During the 40-minute walk at Windsor Castle with the Fab Four, a “teeful” Kate shared Prince Louis’s sweet tribute to his great-grandmother the Queen. 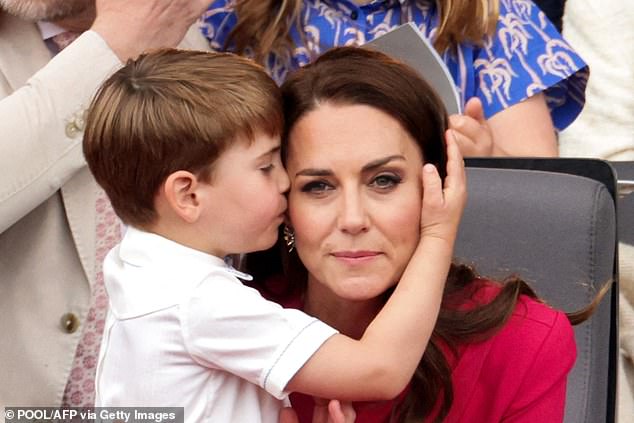 “The youngster is now asking questions like, ‘Do you think we can still play these games when we go to Balmoral and things like that, because she won’t be there?'” said Mr. Hurley. 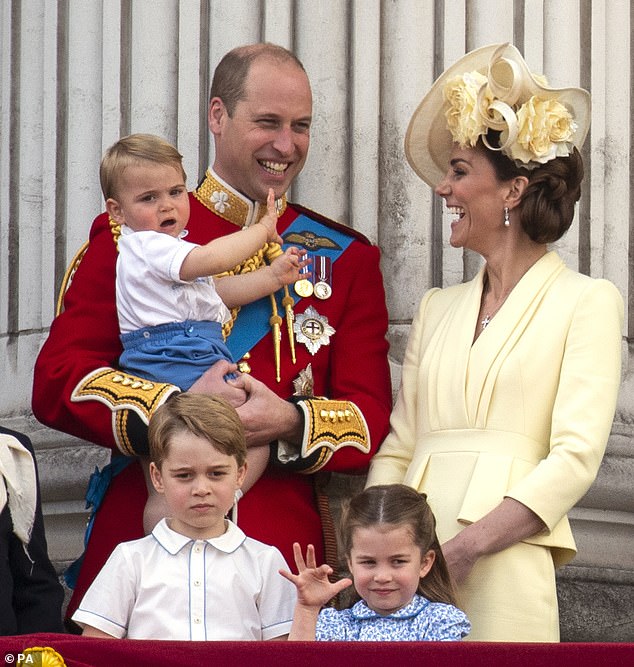 The family has come to terms with the loss of Queen Elizabeth II, who will be laid to rest on Monday

Among the crowd on the Long Walk, Banita Ranow, 28, said she heard Kate telling children next to her about what her youngest son Louis had said about the Queen’s death.

She said Kate said to the kids, “Louis said at least Grandma’s with great-grandfather now.”

Ms. Ranow said Kate “welled up” as she spoke to the children.

The West London benefactor also spoke of her surprise at seeing the two brothers and their wives together, adding: ‘It was really fun.’ 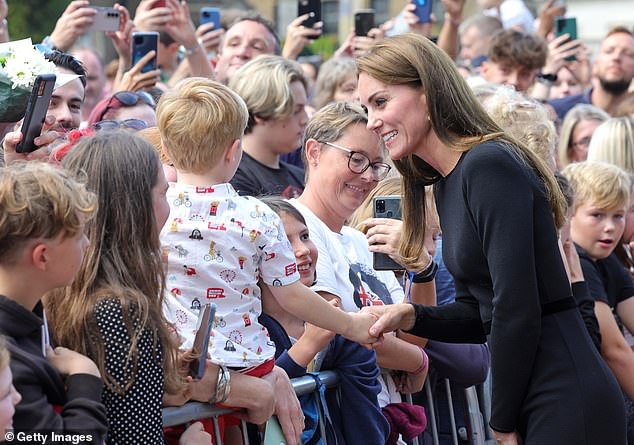 Prince William and Harry, along with their wives Kate and Meghan Markle, took a 40-minute walk at Windsor Castle tonight to inspect the sea of ​​floral arrangements. 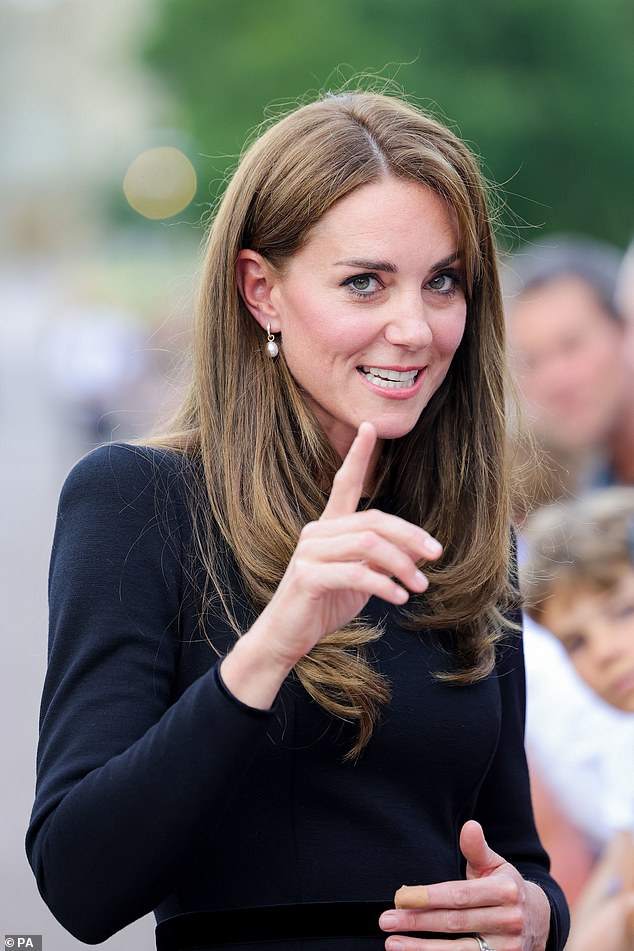 Her mother Baljinder Ranow, 64, said it was “fantastic” and added: “It was so beautiful to see.”

She said: “I felt so emotional and I felt like the Queen would have loved it. I just hope they stay that way in the future and the brothers come together, and the families.”

The prince delighted royal fans by stealing the show on the balcony during the Platinum Anniversary after Trooping the Colour.

He let out a howl and covered his ears during the flypast, and his ‘Gan Gan’ the Queen was friendly with her great-grandson, leaning over to talk to him and point out the planes.